In July 2017 the Royal BC Museum loaned John Lennon’s 1965 Rolls Royce Phantom V to Rolls Royce Motorcars Ltd for an exhibition at Bonhams of London, UK.  I had the distinct pleasure of overseeing the delivery of the Lennon Rolls Royce on that trip.

So how do you drive a three ton car with a custom paint job that is fragile and irreplaceable to Britain?  The answer is you don’t.  You fly, of course.

The Lennon Rolls Royce is more like a moveable artifact than a car, with most of its value associated with its history and aesthetics rather than its monetary collector value.  There’s nothing like it in the world.  Accordingly, care and planning for the loan were critical.  Even a small ding or mechanical failure means a permanent change to the artifact, one that might require expensive restoration work, or more likely, will stay with the car for the rest of its life.  The car is not in perfect condition now, but most of the blemishes are actually associated with the history of the car before it arrived at the Museum.  John Lennon used the car extensively in the late ‘60’s and later lent it out to other well-known rockers including the Rolling Stones, the Moody Blues and Bob Dylan.  Oh, the stories it could tell.

My epic adventure with the Lennon Rolls Royce began with loading the vehicle into an enclosed trailer for the trip to the mainland, where it would be crated for its overseas flight.  It rode the ferry without notice, tucked safely inside its enclosed transport.  So the first leg involved a truck trailer and a boat.

Once on the mainland, the Rolls Royce was unloaded from the trailer under its own power, measured and examined, and a crate design was finalized.  A carpenter set to work building a reinforced platform that looked like it was built to support an office building.  In the end, it is likely that the crate weighed almost as much as the car itself. 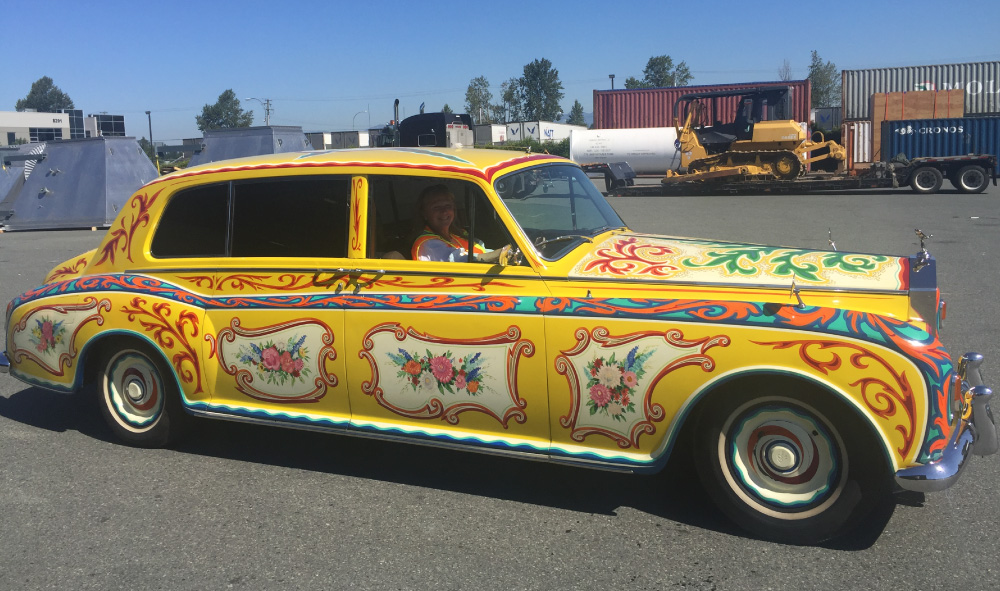 When the crate base was ready, I drove the Rolls Royce up a precarious ramp onto the platform.  This was no easy feat, as the car is right-hand drive, sports a choke, various vintage knobs and levers, and is not driven regularly, so tends to run a bit rough.  There were a few anxious moments when it actually ran out of gas on the ramp, and I feared that the engine-assist breaks would fail to keep me (and the car) from rolling backward into the nearest obstacle.  Fortunately the hand brake worked and we were able to tow it up the rest of the way onto the crate base.
The car was then strapped down over and propped up under the axels, just in case the tires deflated in flight, allowing the car to sink and the straps to go slack.  The crate was made only slightly larger than the car, with no pads or cushioning as these would abrade the paint as a result of vibration during movement. 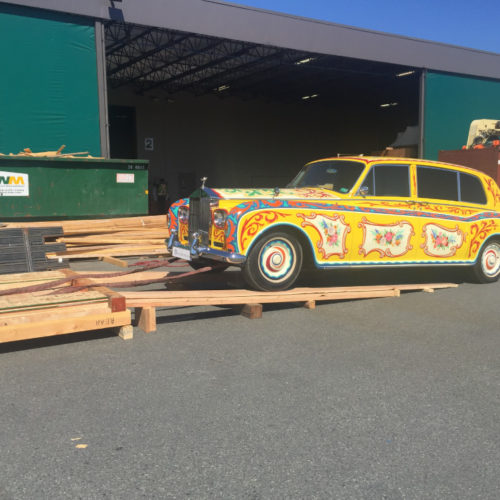 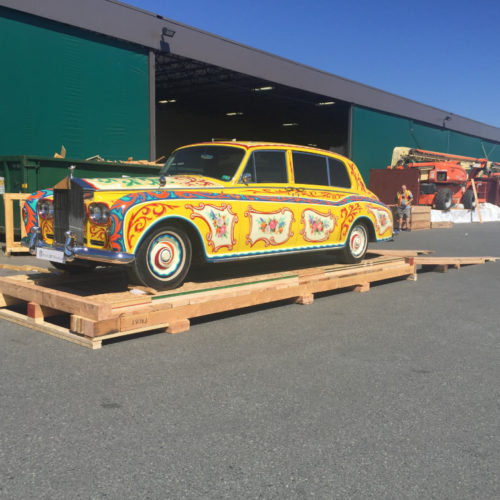 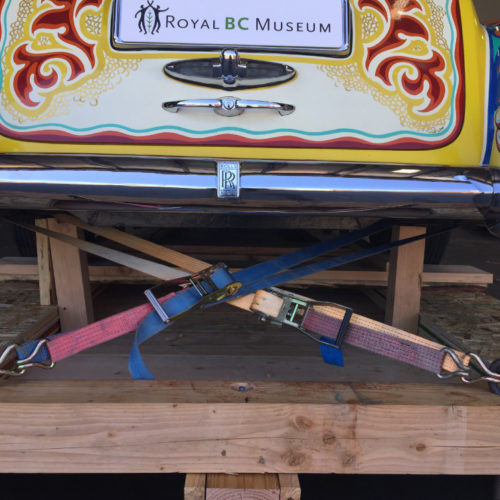 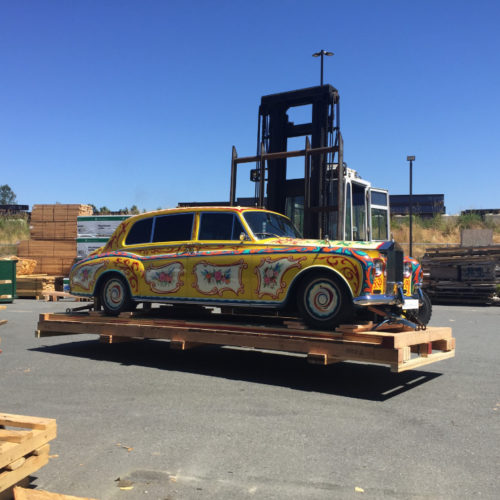 The Rolls Royce then flew into Stansted Airport, north of  London, UK.  The countryside around that part of Britain is amazingly familiar, with the same blackberries in bloom, chestnut trees laden with spikey balls, and, surprisingly to me, fields of Canola (I hail from the prairies).  We met the Rolls Royce in the cargo hangar after it cleared customs.  I would have loved to see the looks on the faces and hear the banter of those customs agents, but that business took place behind closed doors.  The vehicle literally rolled out along a conveyor belt, was lifted off by a humungous fork lift, and deposited into a shower-curtained lorry (when in Rome…).  It fit, with at least an inch to spare.  See, it’s all about the planning. 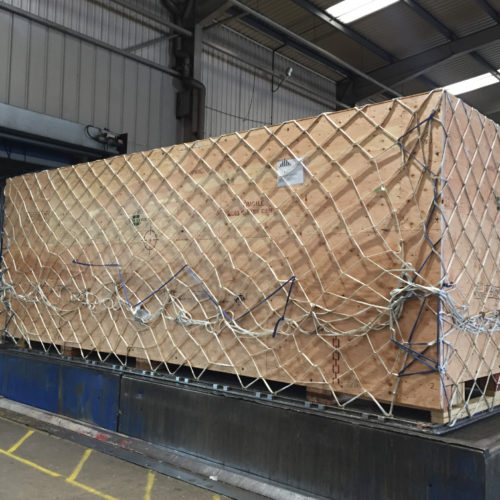 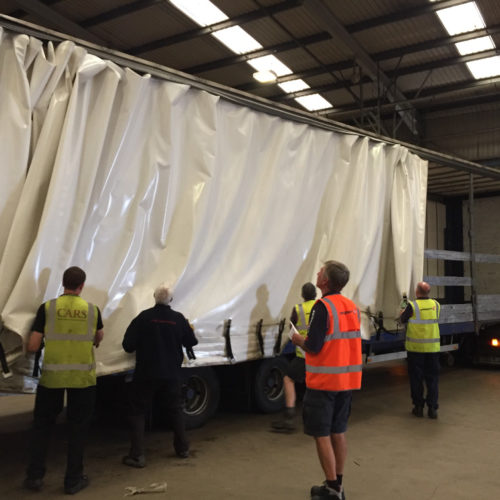 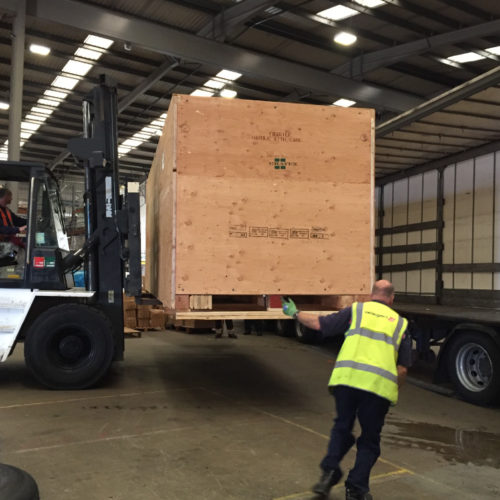 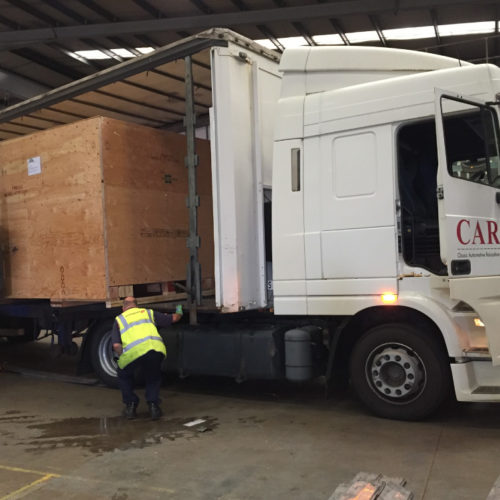 Then we were off again through the English countryside, to a tiny little town between fields, churches and tudor-style inns to the outfit that would uncrate the Rolls Royce.  When we arrived, the team immediately set to work unbuttoning the crate with the expectation of children on Christmas morning.  They knew what was inside and several took a few moments to call their friends and loved ones to brag about their task.  Everyone took pictures.  I fended off overly-enthusiastic bystanders who wanted to climb in. 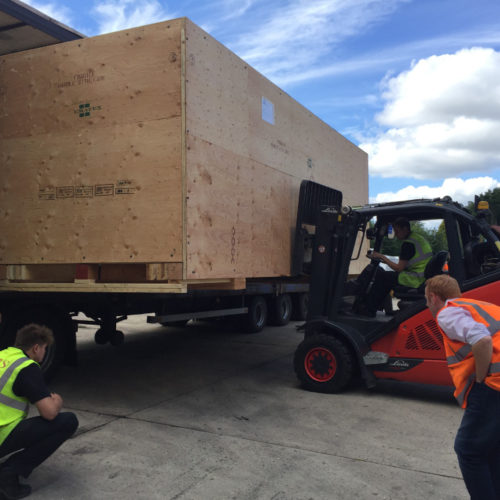 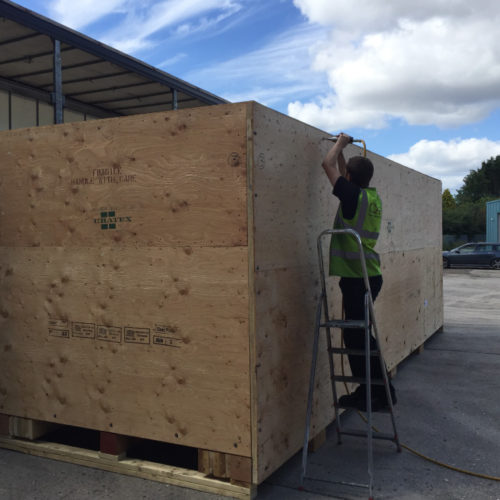 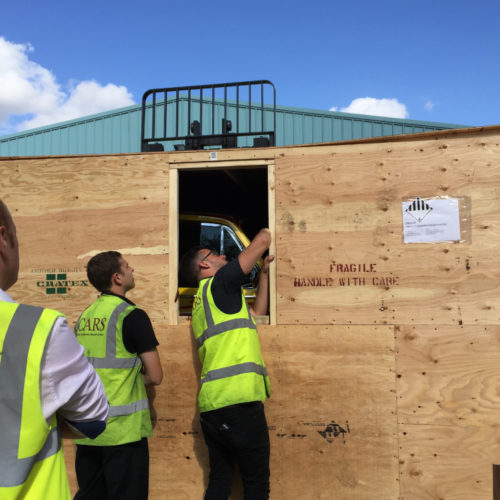 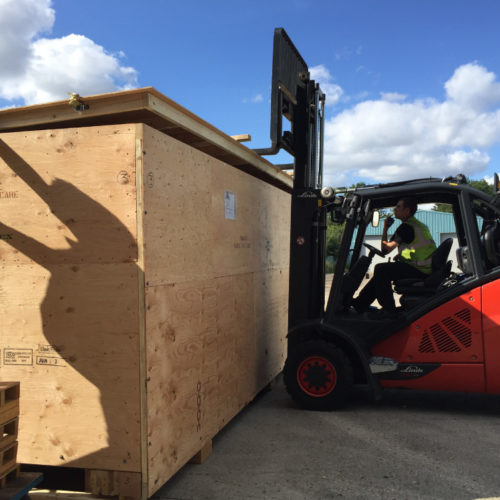 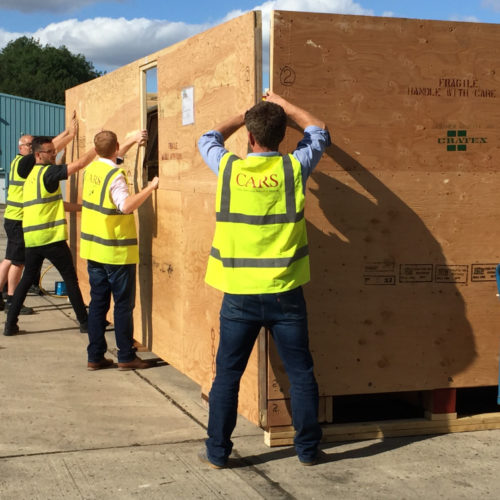 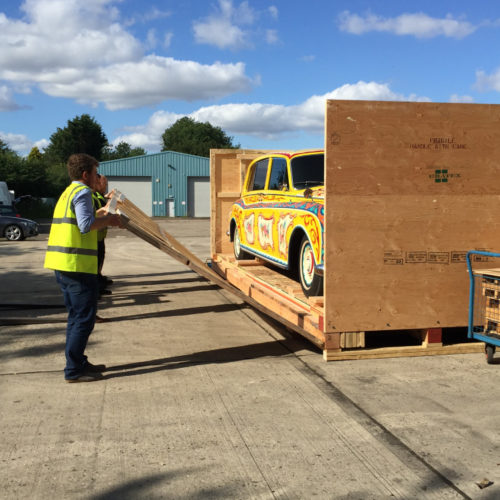 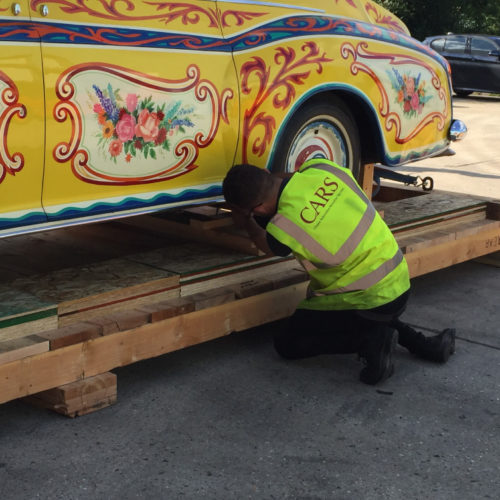 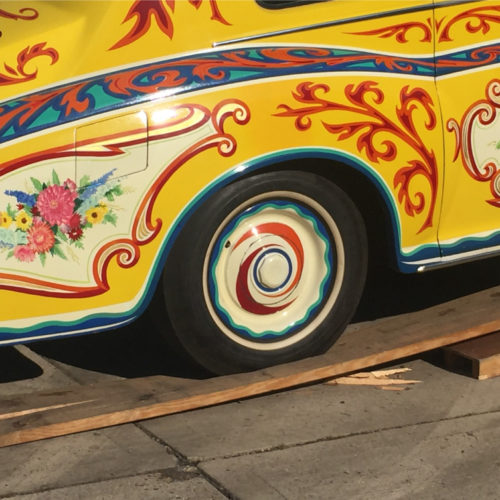 Once again there was an adrenaline moment when the improvised ramp split as the Rolls Royce was driven down off the crate base.  A piercing crack was heard, followed by the sight of the car dropping a few centimeters.  As rubber ages, it becomes stiff and brittle and the tires on the Rolls Royce were definitely on their last… well, legs.  A blow out would be disastrous.  Just the jarring of the slight fall could have dislodged a brittle joint or loose paint. Fortunately no damage was done and the ramp was reinforced before the front wheels met the same fate. 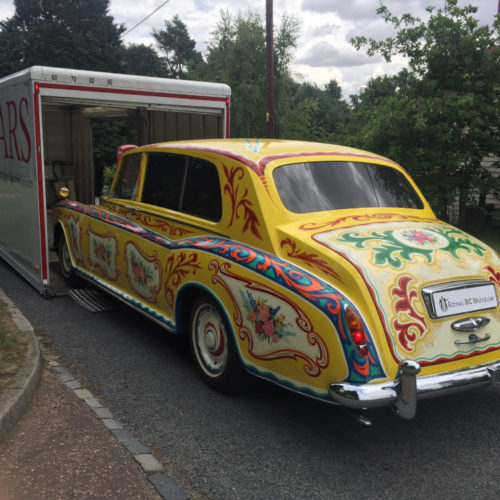 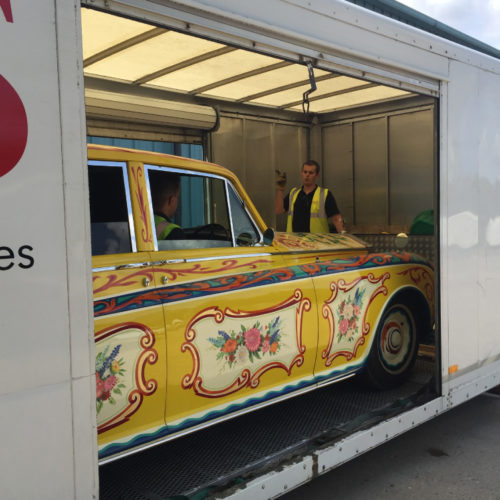 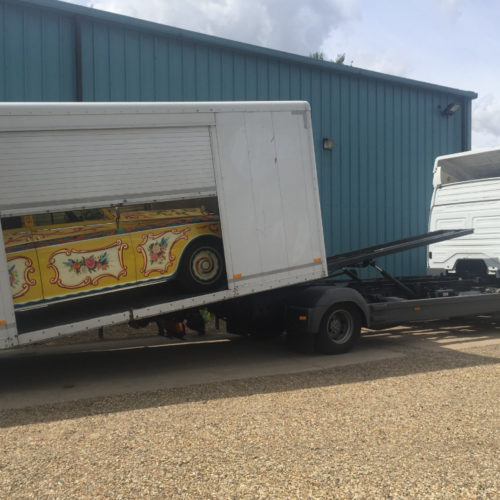 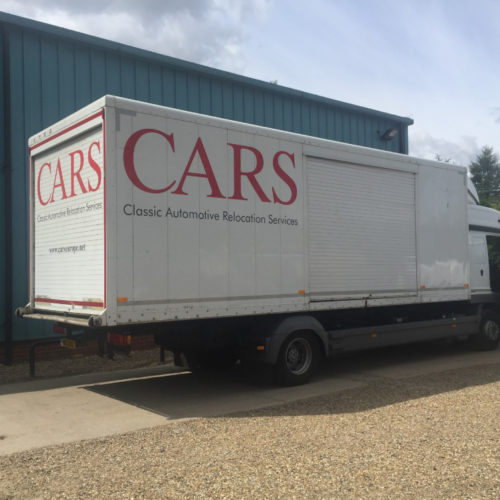 The next leg of the trip involved driving the vehicle onto a special car-carrying lorry.  Fortunately this was a slick job with nothing left to guesswork and ingenuity.  The truck actually disgorged its box onto the level pavement where the vehicle could be easily driven inside using fold out metal ramps.  Then the driver could take his leave through the overhead side door.  These people were professionals with all the best equipment.  I left the driving to them.

Once safely loaded into the car-transport lorry, we embarked on another long drive through the English countryside, destined for P & A Wood, official Rolls Royce service company.  They had been contracted to put new tires on the Lennon Rolls Royce, and to give it a thorough inspection by trained mechanics, experts that we don’t have on staff at the Royal BC Museum.  I marvelled at how the lorry navigated the tight traffic circles, passing through one quaint town after another.  My driver was kind enough to explain to me the processes for thatching roofs and creating the decorative pargetting on the plaster cottages we passed.  The sheep and cows raised inquisitive heads and the ubiquitous pigeons dared us to hit them as they scavenged at the roadside.

After an hour or so, we finally reached our destination, a very impressively appointed set of newer buildings sporting Rolls Royce/Bentley showrooms, parts stores, and two service shops.  We unloaded the Rolls Royce on the street, almost causing a couple of accidents as passing motorists craned to have a look, and drove into a spotless building that looked more like a showroom than a service department.  The Lennon Rolls Royce was deposited amongst its kind, with Fred Astaire’s 1927 Rolls Royce Phantom I just ahead of us.  I felt a sense of awe, but surprising to me, so did the various workers inside, who were thrilled to see the famous John Lennon Phantom V up close.  The digital shutters began snapping again all around me.  It was and will always be a privilege to be in the company of such a world famous piece of history. 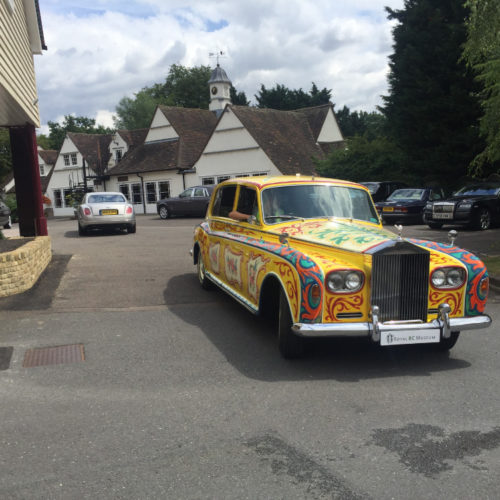 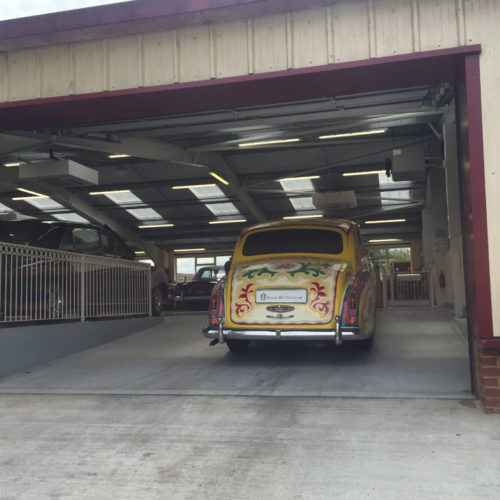 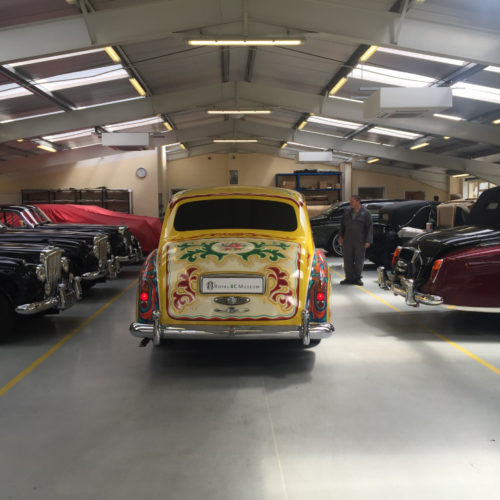 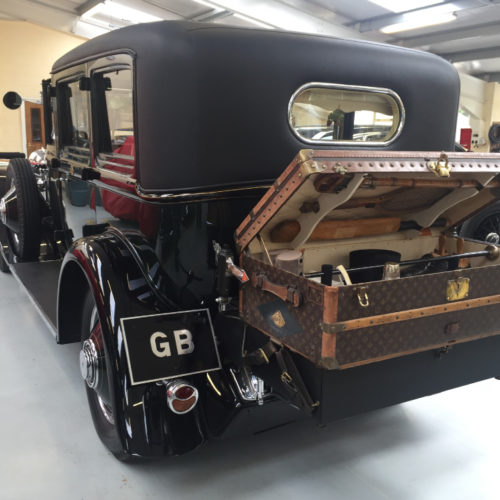 I left England shortly after depositing the Lennon Rolls Royce with P & A Wood, headed home to my office job at the Royal BC Museum.  The Curator, Lorne Hammond, would take my place in London a few days later, assisting with the installation and media events at Bonhams.  The rest will be Rolls Royce history.  It appears that they have finally forgiven John Lennon for daring to mess with their refined brand image.  Time has a way of sorting out those things.  But the excitement around the Lennon Rolls Royce appears to be timeless.