Don’t Fence Me In

On June 16, I received notification that my blog post on introduced lizards in Hawaii was live on the internet. The last paragraph in that article is about western fence lizards (Sceloporus occidentalis), where I ask people who see them in BC, to report the observation (with a picture if possible), or tag the occurrence in iNaturalist. Western fence lizards were on Matsuda et al.’s (2006) radar as a potential immigrant since the species exists so close to the Canadian border.

A Plateau Fence Lizard (S. tristichus) I photographed in Arizona in the year 2000.

Between submitting that blog post and it going live, the plea for lizard sightings was answered. A report came my way of a western fence lizard loose in BC. I had always assumed the first record would surface in the Okanagan region, since several anecdotes from there suggest fence lizards are already present as far north as Oliver. Furthermore, field guides show western fence lizards just south of the Okanagan region (St. John 2002; Stebbins and McGinnis 2018) and Storm et al. (1995) presented a range map for western fence lizards having a straight line at the international border. Lizards don’t recognize political boundaries, so there is no way Storm et al.’s map is accurate. Fence lizards would do really well in the orchards, fence lines and piles of fruit crates of the southern Okanagan.

Instead of the Okanagan, the first record of a western fence lizard in British Columbia came from the Cloverdale area of Surrey, on June 6, 2020. 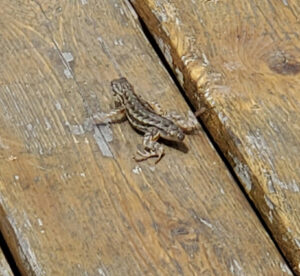 Our first confirmed western fence lizard was a juvenile, and it had lost its tail to some would-be predator. We have no idea how this lizard arrived in BC; most likely it is a stow-away from south of the international border. It could have been an escaped pet, or maybe there is a population now in the area that has gone unreported. The lizard is still loose, but we are hoping to catch it and add it to the museum collection.

The lizard is strangely coloured for a western fence lizard, but it does have the yellow-orange tint to the rear surfaces of the fore and hind limbs. The other possible look-alike in the region, though not in Canada, is the sagebrush lizard (Sceloporus graciosus), which has white on the undersides of its limbs. Sagebrush lizards are in Washington, but nowhere near as close to BC as western fence lizards (Storm et al. 1995; St. John 2002; Stebbins and McGinnis 2018). The nearest population of western fence lizards in Puget Sound is at Cherry Point, about 27 km south of where the Cloverdale specimen surfaced, thanks to a researcher in 1990 who released a handful of fence lizards to see if a population would get established. 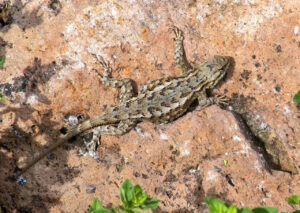 In addition to this Cloverdale record in Surrey, a western fence lizard was reported on iNaturalist, April 2019, at MacNeill Secondary School, Richmond, British Columbia. However, this 2019 report cannot be verified since neither specimen nor photograph are available. Perhaps a second western fence lizard is loose in BC. Maybe it’s a sagebrush lizard. It would be great to get a picture of that Richmond reptile to verify the species.

And I am still not giving up on the Okanagan—if you live anywhere between Summerland and the international border, keep your eyes peeled for fence lizards!