I do prattle on about the invasive common wall lizard (Podarcis muralis) on Vancouver and Denman Islands, and the recent appearance of one Italian wall lizard (P. siculus) in Vancouver, but to put things into perspective, only two lizard species have appeared here, and only one is established. Others from the pet trade, or arriving as contaminants in tropical plant shipments (e.g., bearded Dragon, brown anole, green iguana), represent individuals that escape and never get established. Tropical species will not survive our cool wet winters.

Hawaii, by contrast, has more exotic lizard species than BC has reptiles. The common wall lizard pales by comparison to the Green Iguana. 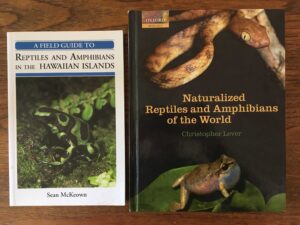 The books I have for Hawaii are out of date, but they will serve to express the magnitude of the problem posed by accidental import, accidental release from the pet trade, and intentional release in areas where exotic species will survive. 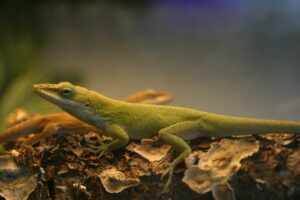 The green anole, a common pet lizard. This one was in captivity.

If we include species that died out, there are 20 species of lizard introduced to the Hawaiian Islands, with 7 species accidentally transported by Polynesians, and the rest more recently from the pet trade or as stow-aways in packing material. Only the yellow-bellied sea snake and sea turtles are native to the Hawaiian Islands, all other reptiles and amphibians were introduced by humans. 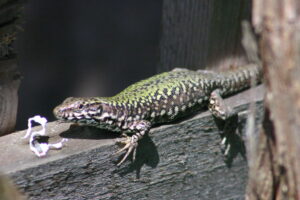 I am sitting in my dining right now and looking out at the grey sky, knowing that it is 8 degrees Celsius outside. Tropical lizards have no chance on Vancouver Island, and so I am not alarmed at the annual wave of brown anoles that arrive as eggs in plant shipments from the USA. The lizard species that could survive here need to be able to withstand freezing temperatures. European lacertids, like the green lizard, western green lizard, Ibiza wall lizard, Dalmatian wall lizard and Italian wall lizard that at one time or another were established in the United States, and the viviparous lizard which appeared in Japan, are the only lizards that fit the profile. Perhaps the entire family should be prohibited from the pet trade in North America to limit the risk of introduction.

The western fence lizard also is a species that could survive in BC—it may be in the Okanagan region already, as far north as Oliver—so keep your eyes peeled for these guys. They have also been introduced to the Puget Sound area in Washington and would do fine on southern Vancouver Island. These prickly lizards are common around human habitation. They have bright blue patches on their bellies and do push-ups as a territorial display—if you see one, let me know or tag it in iNaturalist.