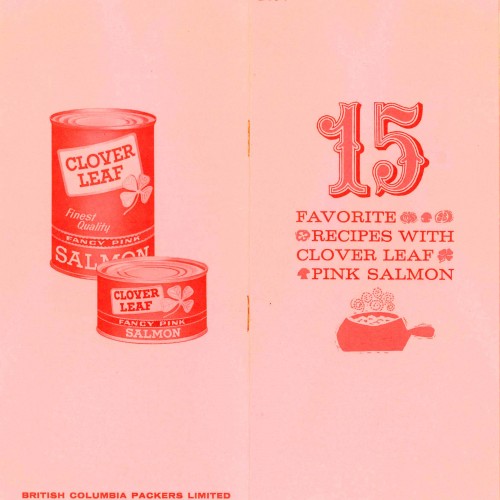 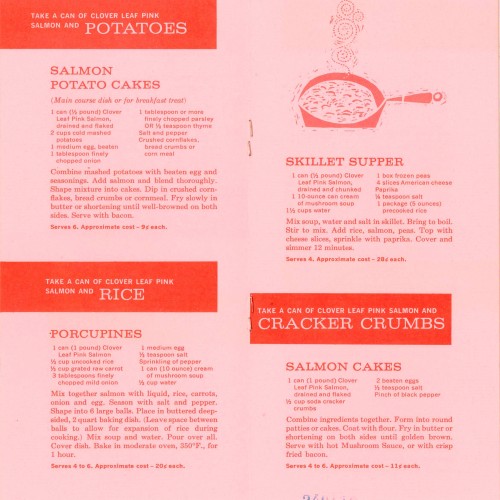 This small undated pamphlet, 15 Favorite Recipes with Clover Leaf Pink Salmon, appears to be from the 1960s.  That’s a decade later later than the film footage we discussed in Part 1, but it carries on a similar tradition.  It is still possible today to pick up recipe sheets from grocery store displays, which is likely where this particular pamphlet would have been found.  I love the lurid pink colour of the paper, mimicking the flesh of the pink salmon it is promoting.  We can’t miss the connection between the paper colour, the words “pink salmon”, and the fish’s flesh.

Each of the recipes is clustered around a common carbohydrate: “Take a can of Clover Leaf Pink Salmon and _____”.  You filled in the blank with your choice of carbohydrate — biscuit dough, bread crumbs, pastry, potatoes, rice, cracker crumbs, or macaroni.  They are simple recipes with few ingredients, and they rely on processed foods such as canned vegetables, canned shoestring potatoes, and the (infamous) canned cream of mushroom soup.

I find the inclusion of the price per serving instructive.  Many of the dishes cost less than 25 cents per serving; the per-serving cost ranges from a low of 9 cents for “Salmon Potato Cakes” to a whopping 28 cents for the “Skillet Supper”.  The convenience of canned salmon, and the fact that cans could be stored safely without need for refrigeration, probably made the product attractive to the consumer.  I don’t know how many women would have prepared the more elaborate salmon dishes demonstrated in Part 1’s filmed cooking class, but my own experience in the early sixties attests to the fact that middle-class mothers really did make salmon fish cakes and salmon loaf as regular dinner offerings.

The recipes included in this pamphlet are far more practical than those presented onscreen in the film Silver Harvest.  The Salmon Potato Cakes, for example, were probably a standard reliable main dish on many Canadian dinner tables.  They were quick to prepare and cook, utilized a common leftover (mashed potatoes), and could easily be stretched to accommodate an extra person at supper. In my childhood, they appeared for supper with astonishing regularity.  While they weren’t my favourite dish, I knew that there were far worse horrors that could appear in their place.

When I worked in the archives’ reference room, providing access to materials like this little pamphlet, I always felt that a key value in our archival records was that they allow us to reconnect with the past.  Sometimes that past is a more general historical past — and sometimes is part of our own very personal past.