Transport yourself back one hundred years to Helmcken House on December 24th and you would be in the middle of a lively party with grandchildren running up the hall, the piano playing a merry tune and many toasts and wishes of good cheer. If you could have been a fly on the wall during Christmas program docent training last year, you would have seen a less cheerful scene as a very lively debate took place about the colour of the tongue. That’s right, I said the tongue. Part of our decorations for Helmcken House  includes setting the dining room table with dishes and props to represent the type of  foods the Helmcken family would have enjoyed such as  a turkey, beans, potatoes, carrots, a fish and a beef or ox tongue. Some of our docents have enjoyed eating tongue and insisted that the grey coloured prop on our table was NOT representative what appeared on their tables, they remembered a lovely burgundy colour. Messages went back and forth between the prop department and the history department and consensus could not be reached.

Delphine Castle, Collection Manager of Modern History proposed that to settle the colour choice perhaps a docent could cook-up a tongue and confirm if the colour should in fact be burgundy. One docent, Thyrza Blaze took up the task and Delphine provided a recipe from Mrs Beetons Book of Household Management. Mrs Beeton was the celebrity cook and lifestyle guru of her day and her book, along with Helmcken family photographs, was used by Delphine to decorate the house and set the dining room table. Thyrza  contacted another docent who had eaten and cooked tongue, and that docent gave her a second recipe from another old cook book. Both recipes had salt, sugar and saltpeter. With the help of Google, Thyrza discovered that saltpeter was what gave meat a distinctive red/burgundy colour. Saltpeter is not a regularly available culinary item any longer, so what to do?  With the suggestion of yet another docent, Thyrza contacted the Chemistry department at the University of Victoria who kindly gave her an ounce for her project learning adventure.

After a trip to the butcher Thyrza began the long process of pickling the tongue in brine – 14 days of turning it very day – front to back and back to front. To document the project, she took photographs throughout the process. 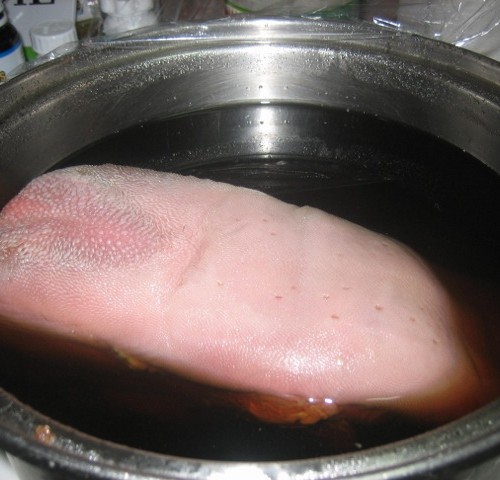 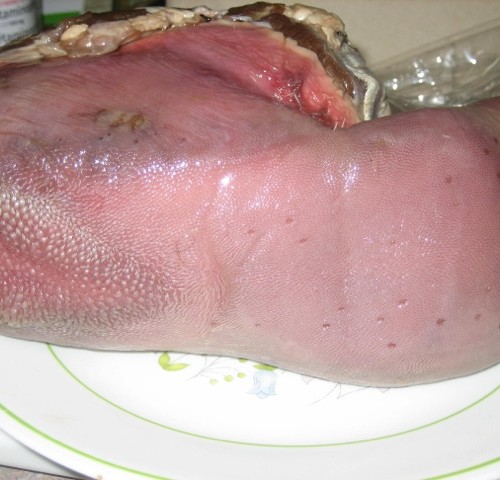 After being in the brine for 14 days

She also learned that in addition to saltpeter giving the meat the distinctive reddish burgundy colour, it also kills the botulism bacteria. Thyrza wisely decided to take advantage of modern conveniences and put the brining tongue in the refrigerator.

When the 14 days were up, she cooked the tongue as per the recipe. As it was to be slow cooked for many hours, she cooked it overnight in her crockpot and awoke in the morning to such a delicious smell, she could hardly contain herself from eating the whole thing! 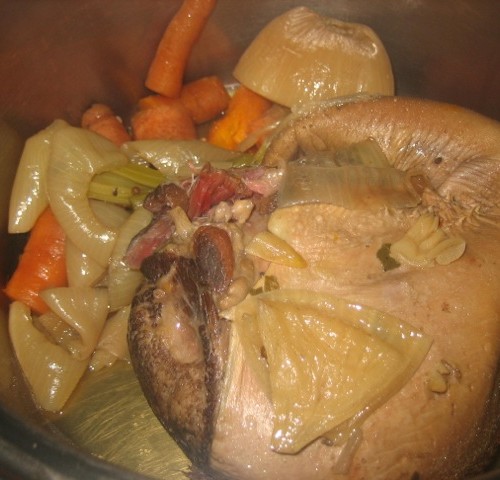 After skinning the tongue she put it in a small bowl to form a circle (which was how her mother prepared it) with a weight on top and put it in the refrigerator. Because tongue has very little fat but a lot of essence, it jelled beautifully.Due to a delay in being able to bring the cooked tongue to the museum for Delphine to see, Thyrza had to freeze the tongue. When she did bring it the museum, it was thawed and stretched out (more like he picture from Mrs Beetons’ cookbook) and photographed. Delphine ate some of the tongue and declared it tasted like corned beef and certainly better than her grandmother’s cooked tongue. 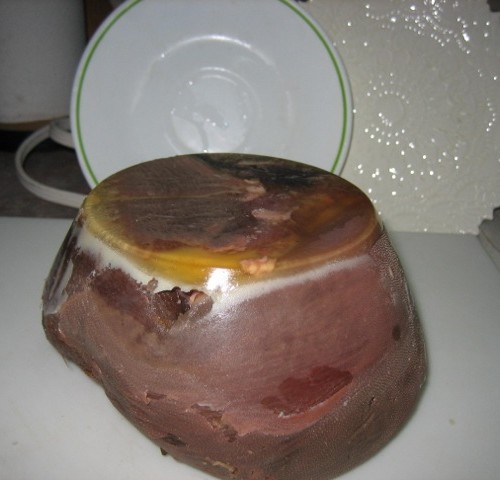 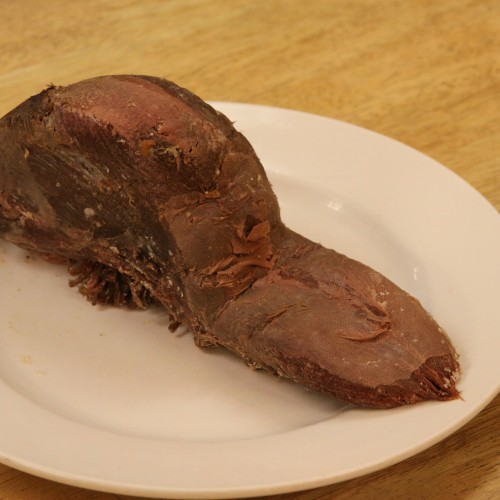 This year, a newly painted  burgundy coloured tongue is on the table at Helmcken House. If you could have been at the docent training you would have heard a sigh of relief from the docents who were pleased to see a tongue of the proper colour, and from those who were happy that there was no further lively discussions.

Many thanks to Thyrza Blaze for her contributions to this article, including co-writing.