We were asked to photograph the Chief Case for use on our old website, a seemingly simple task. What made this shoot particularly challenging was not only the many reflections of the surrounding gallery, but internal reflections within the glass case itself.

We decided to tackle the issue of the internal reflections by shooting vertical slices that would later be stitched together in Photoshop. By shooting in this way, we were hoping to create a final image with very high resolution and detail, as well as minimizing distortions and changes in perspective. We wanted to ensure that the camera remained as square as possible while moving sideways along the case, so we had our staff from our technical department (thanks Colin) build a sliding rail that we could mount our camera to. The rail system was supported between two sawhorses and squared to the facing wall using a laser distance measure.

In order to deal with external reflection from the gallery, we set up two large, black backdrops, a black dropcloth across the rail system and taped black paper over any smaller item, such as the exit sign just outside the case.

After about 2 hours, shooting was ready to start. And that’s when all the lights went out…timers. We left the equipment setup for the night as best we could and returned the following morning before the gallery opened to the public. Shooting was completed and we got everything dismantled just in time for the first visitors.

Now came the post-processing, which simply wasn’t working as easily as we had hoped. Even using a fairly flat-field copy lens and shooting vertically, the changes in perspective still caused a lot of headaches. We had actually tested shooting with a wide angle lens previously, and the results were even worse. The automatic Photoshop stitching simply wasn’t working and it eventually took Carlo about 3 hours of manually blending layers in Photoshop to achieve the final, successful image.

Between multiple testing takes, equipment setups and take-downs, and the final digital post-processing, this project took the better part of 9 total hours. This may sound excessive for one shot, but we learned a lot, developed some new equipment and some new techniques. And in the end, we produced an extremely high resolution, reflection-free photograph that we were both very pleased with. 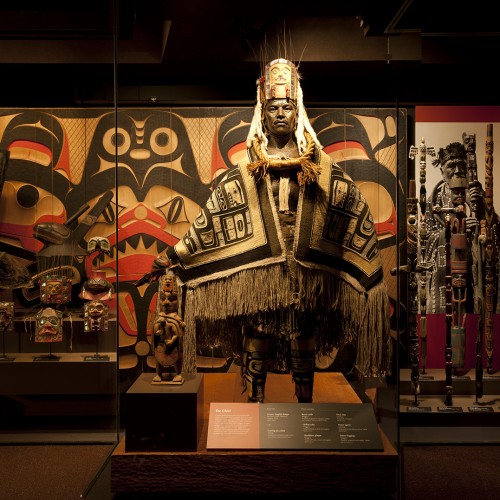