Many photos have circulated in the last year showing an American kestrel feeding on common wall lizards. It is so nice to see a predator with a taste for exotic food.

But falcons aren’t the only lizard predators out there. Young lizards are taken by a wide range of animals, from spiders—yes, hatchling lizards get caught in webs and eaten by spiders—and snakes to raccoons, domestic cats and dogs, some larger birds like the great blue heron, and a wide range of perching birds. 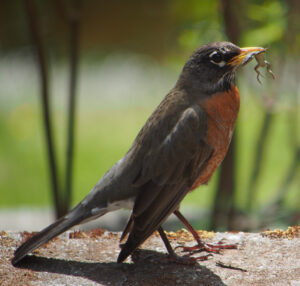 This weekend I received a nice photo of an American robin who has also decided that young wall lizards are fast food  worth the effort. 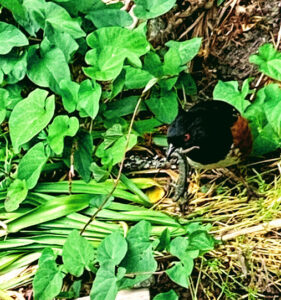 Spotted towhees, house sparrows, dark-eyed juncos, Steller’s jays and a few other birds also love lizard lunches. But even with passerine predation, the wall lizard population is still beyond control.

If you see something hunting and catching common wall lizards, please take photos and document the event. Records can be added to iNaturalist and emailed to me at the Royal BC Museum.