While cleaning out files for the move of our offices (and the entire Royal BC Museum collection), I found an old black and white photograph. Most photos I have found are not useful given today’s publication standards. But this black and white photo by Barry Campbell, taken September 8, 1975, shows a basking shark off the north end of Flores Island, not far from Obstruction Island, along the west side of Vancouver Island. 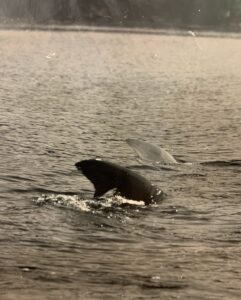 The photographer said he had seen up to eight sharks at a time in this area—I can’t imagine seeing eight of the planet’s second largest shark. This species has been all but eliminated from British Columbia. Seeing one is newsworthy today; if someone said they’d seen eight, I would not believe them.

There is another note attached to the photograph, dating to 2002. The author of this newer note states that the fins are from a dolphin or some other whale. However, the photo clearly shows the shark swimming away from the photographer with the tail in the foreground, and further away is the dorsal fin flopped over to the left. The subterminal notch in the tail, which delineates the upper lobe, is clearly visible. The dorsal seems to be lighter coloured, but this could simply be the angle light is hitting the dorsal fin at relative to the tail.  The shark was estimated to be about 7.6 metres long (back then he used the old measurement of feet, and this shark was about 25 of those). 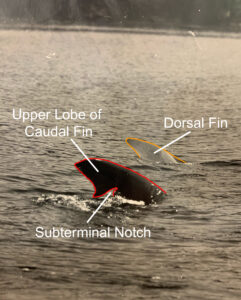 I wasn’t fortunate enough to be on the CCGS Vector the year they saw a basking shark up near Langara Island, but someday I hope to see one of these massive plankton predators in person.