New Eels in BC

Prior to 2010, the eels of British Columbia had been poorly studied and only 6 species of eels and eel-like fishes were known from our coastal waters. Two species of cutthroat eel (Histiobranchus bathybius and Synaphobranchus affinis) were expected to appear here because they range from the west coast of the contiguous United States to Alaska, but as of February 2020, neither species has been discovered in British Columbia.
Kamikawa and Stevenson (2010) led the charge with the publication of range records for Aldrovandia oleosa, including those from British Columbia. Their new records from 819-2014 m off California and British Columbia represent a range extension of 11,000 km from the nearest historic records in the western central Pacific Ocean.

Hanke and Roias (2012) announced the discovery of two duck-billed eel species in British Columbia. As of January 2020, only one specimen of Venefica ocella has been found in BC waters, off the southern end of Haida Gwaii at 1669 m. Five specimens of V. tentaculata have been found at depths of 1757 to 1869 m, from northwest of Haida Gwaii to Vancouver Island. These specimens extend the range of the genus at least 900 km north in the eastern North Pacific Ocean and suggest these eels also range north into Alaska.

Hanke et al. (2014) added another 4 new species to the fish fauna of British Columbia, and updated the known ranges of another 4 species. The Snub-nosed Spiny Eel, Notacanthus chemnitzii, had been caught repeatedly in British Columbia, and had been noted in several checklists (Gillespie 1993, Love et al. 2005), but details of the species’ range, and the depths it inhabits (1480 to 2400 m) along our entire coastline went unpublished until 2014. The first specimen of Synaphobranchus brevidorsalis for British Columbia was caught in 2006 at 1751 m off the north end of Vancouver Island and is significant as the first record for the North Pacific. Nemichthys larseni, the Pale Snipe Eel, was caught roughly 18.5 km inside the Canadian Exclusive Economic Zone at a maximum depth of 300 m, and to date is the only specimen from British Columbia. Hanke et al. (2014) also extended the range of Cyema atrum (the Bobtail Eel) north from Oregon to British Columbia with the 2006 collection of a single specimen from 1890 m off the north end of Vancouver Island.

There have been no other eel species discovered in British Columbia waters since 2014, and below is the list of 13 spiny eel, gulper eel and true eel species known to exist off here (as of February 2020): 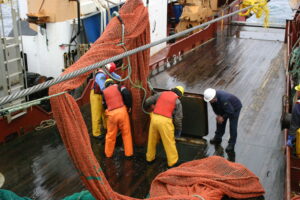 Coast guard crew on the fishing deck of the W.E. Ricker, ready to unload the catch from a trawl net. The catch drops to the science lab below and is sorted by scientists. For safety reasons, scientists are not allowed on the main deck when the net is in use. Photo by G. Hanke. 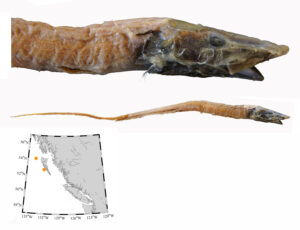 Aldrovandia oleosa (Bathyl Halosaur) – known from the Atlantic from Canada to Venezuela and Guyana and the Gulf of Guinea, the Indian Ocean and in the Pacific from Chile to California, with the first two for British Columbia from 2004, west of Haida Gwaii; published by Kamikawa and Stevenson (2010). 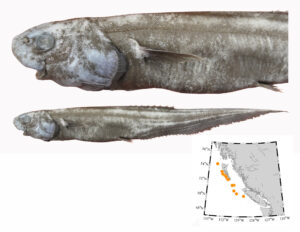 Notacanthus chemnitzii (Snubnosed Spiny Eel) – likely is distributed world-wide, and in our region from California, Oregon, the Bering Sea, the Sea of Okhotsk to Japan, with 14 specimens dating back to 2002, now known from along the entire BC coastline; published by Hanke et al. (2014). 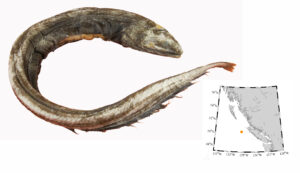 Synaphobranchus brevidorsalis (Shortdorsal Cutthroat Eel) – this species is circum-global from 40°S to 40°N, and was unknown in the north Pacific until 2006 when we caught a specimen off the north end of Vancouver Island; published by Hanke et al. (2014). 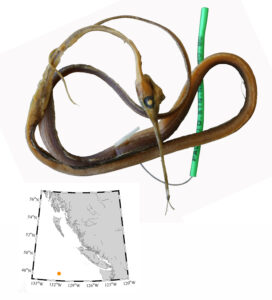 Nemichthys larseni (Pale Snipe Eel) – has been collected in BC once – only about 18 km within our Exclusive Economic Zone. All other grey snipe eels in BC have turned out to be Nemichthys scolopaceus on close inspection; published by Hanke et al. (2014). 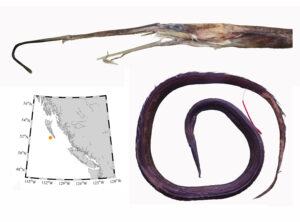 Venefica ocella (Witch Eel) – originally found along the west coast of Central America, but we now know its range now extends north to Moresby Island in British Columbia. This specimen caught in 2004 is the only one known for BC so far (the full body in this image is for V. tentaculata, just to show the basic shape of Venefica species); published by Hanke and Roias (2012). 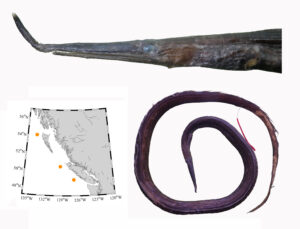 Venefica tentaculata (Sorcerer Eel) – originally described from specimens found between Cocos Island off the west coast of Costa Rica and Acapulco, Mexico. The species range now extends north to the northern tip of Vancouver Island based on 5 specimens caught between 2002 and 2006; published by Hanke and Roias (2012).

Cyema atrum (Bobtail Eel) – is known from Panama, north to Oregon and west to Japan in the North Pacific, and is widespread in all other temperate and tropical oceans. The one and only specimen for BC was collected in 2006; published by Hanke et al. (2014).
Dr. Gavin Hanke 11.02.2020   Categorized Collections, Knowledge and Engagement, Knowledge, Natural History