Most new fishes found in the last two decades were caught during deep water surveys and are adapted to cold water – they probably are not new, just newly discovered. However, marine life is known to stray north during el Niño years, and with the warm water “blob” events in the last decade, unusual northward range records were expected. But northward strays are not a new phenomenon, with historic records of smooth hammerhead sharks (Sphyrna zygaena) off Vancouver Island (Carl 1954, McFarlane et al. 2010), and a tiger shark (Galeocerdo cuvier) and finescale triggerfishes (Balistes polylepis) as far north as Alaska (Mecklenburg et al. 2002).

Only a few of the new range records in BC likely are attributable to warmer surface waters, including the appearance of the North Pacific argentine (Argentina sialis), which historically was known north to the mouth of the Columbia River in Oregon (Love and others 2005). In 2011, a single North Pacific argentine was caught west of Clayquot Sound from 118 m, and represents the first record of the species in British Columbia.

Three years later, during the height of the 2013-2015 warm blob event, a finescale triggerfish (Balistes polylepis), was caught alive and well off the west side of Vancouver Island, and a fresh louvar (Luvarus imperialis), was found on the beach near Massett. The louvar and finescale triggerfish represent significant strays north of Baja. With its body evolved for open water cruising, it is easy to see how the louvar made its way this far north, but even triggerfishes which swim at a leisurely pace, have strayed into southern Alaska during el Niño events.

Jump forward 5 years, and a spotted porcupinefish (Diodon hystrix) was found dead at low tide, Jordan River, southern Vancouver Island. The specimen was fairly fresh and had not been scavenged. A second porcupinefish was seen on that same stretch of beach on September 26th (Jerrett Taylor pers. comm.). The second fish was not recovered. Following the coastline, the fishes found at Jordan River are about 2100 km north of their previous range limit off San Diego. It seems unlikely they swam along the coast against the California Current, where upwelling keeps the water cold, but instead took an offshore route in water 2-3°C warmer than normal. Open water excursions are possible given that spotted porcupinefish have crossed open ocean to reach Hawaii, Pitcairn, Easter, and the Galapagos islands. Spotted porcupinefishes have an long larval phase in open water and according to Leis (1978), this is ample time for dispersal.

Were these the first porcupine fishes in BC? Yes. But a relative of the porcupinefish, a burrfish (Chilomycterus affinis; RBCM 610), was found in BC in July 1939, along Dallas Road in Victoria. The specimen looks like an inflated curio from a tourist trap and Carl and Wilby (1945) were suspicious and did not put the burrfish on the list of fishes known to inhabit our waters. 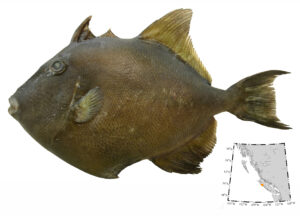