New Cusk Eels for BC

Cusk-eels and brotulas of British Columbia have been poorly studied, and until recently, only two species were known from our waters – Spectrunculus grandis and Brosmophycis marginata. However, deep-sea survey samples from 2002-2006, and the commercial fishery provided six new species, with a seventh revealed during re-examination of museum specimens.

One specimen of Cherublemma emmelas was identified from commercial fishery bycatch in July 2006. It was in a trawl haul from 1097 m in Kyuquot Canyon, west of Vancouver Island, and extends the species’ range roughly 2890 km into British Columbia.

Shrimp survey samples, and the commercial fishery in the southern Strait of Georgia, British Columbia revealed an additional cusk-eel species (Chilara taylori) at depths of 78 to 109 m. These two fishes have since been joined by others added to the collection, and represent a modest extension of the species’ range north of Willapa Bay, Washington.

A single specimen of Acanthonus armatus was taken during deep-sea research collections from near Triangle Island at 1778 m and is the first record for the eastern North Pacific Ocean as well as Canada. The announcement of this fish’s presence here netted some unexpected attention because of its common name, the Bony-eared Assfish. The rest of the new cusk eels failed to draw the same level of attention.

Four specimens of Bassozetus zenkevitchi were collected from depths of 1909 to 2125 m west of Vancouver and Graham islands, show the species ranges along our entire coast. It is likely that others were caught years ago, but were mistakenly identified as Arrowtail, Melanonus zugmayeri, and discarded.

During the preparation of the manuscript detailing these new records, I re-examined cusk eels in the Royal BC Museum collection. In the process, a single specimen of Spectrunculus crassus was identified from among the few S. grandis preserved at the Museum. Spectrunculus crassus had been split from S. grandis in 2008, and to date, is the most recent addition to our cusk-eel diversity.

Because of increased sampling effort since 1999 and re-examination of museum specimens, we now know that 9 species of cusk-eel live in our region. 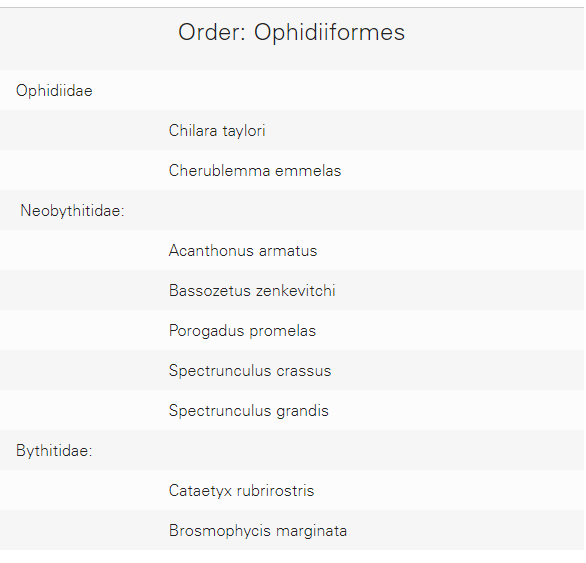 Porogadus (with its rushed misidentification while we were at sea) as photographed when a tissue sample was taken for DNA barcoding (for some reason this fish does not appear on the website for the Consortium for the Barcode of Life[CBOL]).
Dr. Gavin Hanke 21.01.2020   Categorized Collections, Knowledge and Engagement, Knowledge, Learning, Natural History, Research