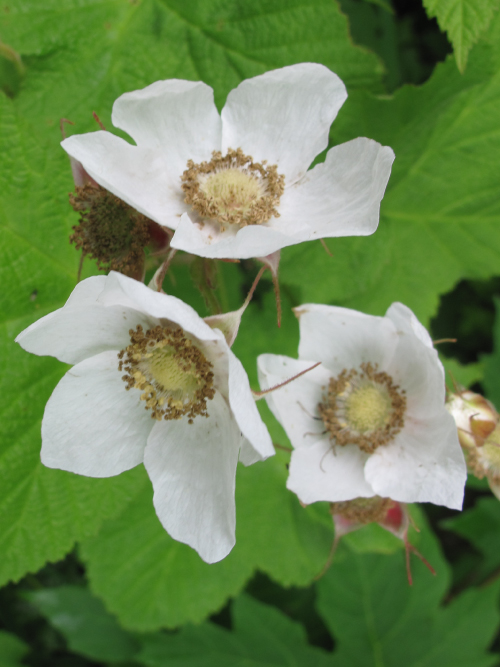 British Columbia is home to shrubs with many uses. For ex­ample our Oregon-grapes (Berberis or Mahonia species) make excellent year-round or­namentals, whose fruits produce tasty jelly. Few of our shrubs however can match the thimbleberry of the Rose Family (Rosaceae) for utility. Not only does it have tasty fruits, but this shrub produces ed­ible shoots, soap from its stems, and is an attractive and widely-adapted subject for gardens.

Thimbleberry forms waist- to head-high thickets of numerous erect stems. The stems are thorn-free, unlike the closely related raspberries and blackberries. The bark is distinctively flaky and especially hairy on new growth. Maple-like leaves, 10-30 cm (4-12″) across occur at the ends of the stems. Each one has seven to nine lobes and a texture like soft sandpaper.

Open flower clusters, containing three to eleven blooms develop at the ends of the branches. Each bright white flower can be as wide as 7-8 cm (3″) across. Five long greenish sepals surround five clear white oval petals. A ring of many stamens encircles a central fleshy dome. This dome is the swollen end of the stem, and attached to its surface are numerous tiny greenish pistils. Once the egg in each pis­til is fertilized, the pistil transforms into a tiny red fruit with a hard seed inside. The mass of little fruits forms a shallow “thimble” over the central dome, looking like a thin raspberry. The velvety thimbles are somewhat dry but usually taste very sweet. 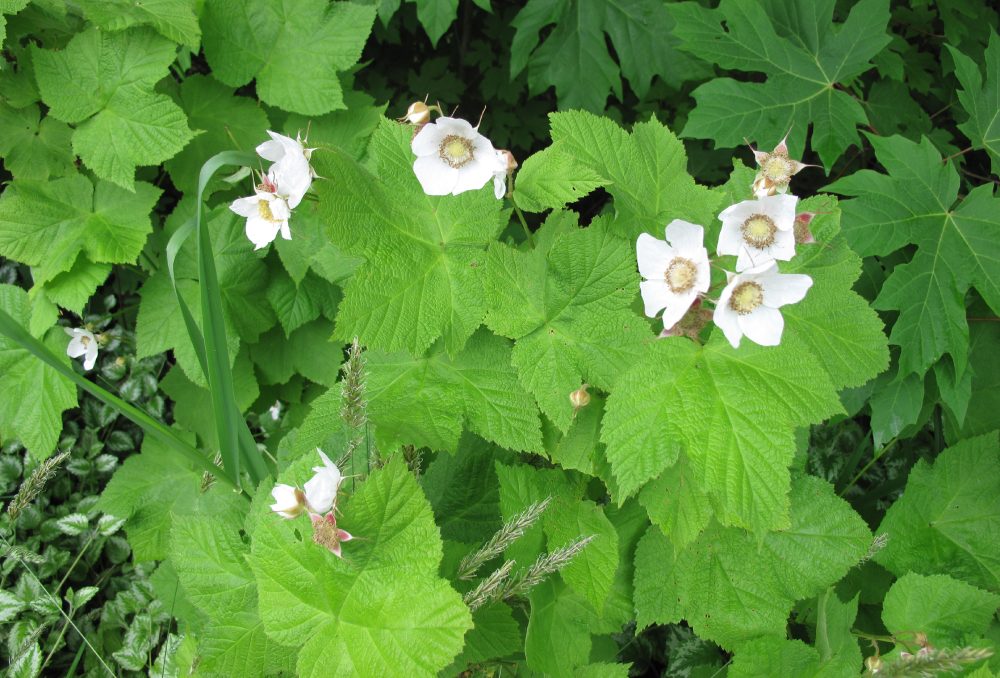 Thimbleberry grows throughout much of British Columbia except the far north. On the con­tinent you can encounter it from Alaska to northern Mexico and eastward to Ontario and Colorado. Typical haunts include open sites, often at the edge of woods, roadsides and shorelines. Surprisingly thimbleberry inhabits both moist and dry sites and occurs across a wide range of elevations from sea level to the high subalpine zone; a widely-adapted plant. Notably, it is one of the species to colonize early after disturbance par­ticularly along highways.

Thimbleberries are excellent sub­jects for naturalizing in corners of suburban lots. They seem not to be choosy about soil conditions and will grow on raw unprepared surfaces. In fact, in some places they will appear on their own, presumably inoculated from bird droppings. They will grow in full sun to part shade. These shrubs quick­ly form thickets, generating wildlife cover and stabilize the soil. Butterflies love the flowers and birds relish the fruit. 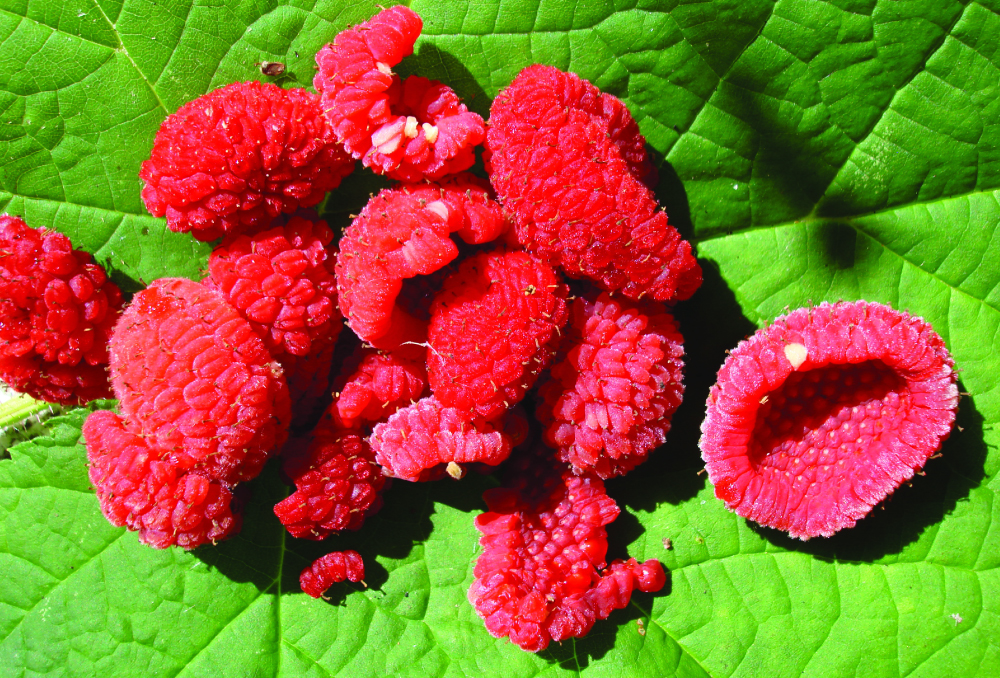 You can often purchase thimbleberries from the local nursery or garden centre by asking them to order it in. There are several suppliers in British Columbia. This native species has recently become available through mail-order from seed and nursery catalogues. Thimbleberries can be raised from seed sown in place in the garden in the fall for germination in the spring. Rooted offset stems will also transplant in a dormant state.

First Nations of British Columbia used thimbleberry for many purposes. Fruits were eaten fresh by most groups or pressed and dried into cakes for later. People of the west coast of Vancouver Island gathered canoe-loads of sweet and juicy spring shoots, peeled and ate them raw. Okanagan people lined their steam-cooking pits with the large leaves. Shuswap Carrier First Nations used the leaves to separate dif­ferent types of berries in a picking bas­ket. The Cowlitz of nearby Washington State boiled the bark for soap. Today hikers nibble on the wild fruit during their wanderings.

The technical name “Rubus” is based on an ancient Roman name for a related plant. The species name “par­viflorus” means “small-flowered”, hardly appropriate for the large attrac­tive blooms produced by thimbleberry.

Thimbleberry is a widely adapted native shrub for most gardens in the province; fruit, vegetable, ornamental and soil healer all rolled into one. It is hardy to Zone 3 in Canada.