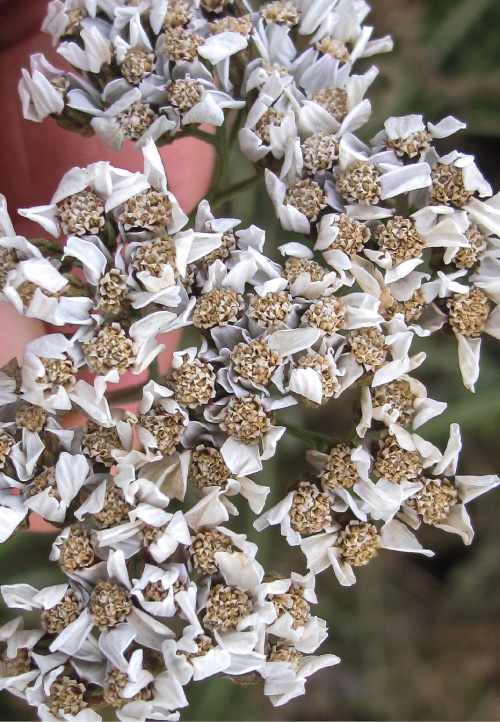 Details of yarrow flowers, taken along a roadside in Colwood BC in December. The petals of the white ray florets have been twisted by frost. The brownish grey disk florets are visible in the centre of each little flower head. Photo by Dr. Richard J. Hebda.

Numerous plant species release strong scents when brushed. In the past, these smells were taken as a sign that the plant may have medicinal prop­erties. Even today, some popular remedies still depend on aromatic compounds from plants. For example several brands of cough candies con­tain derivatives of the eucalyptus plant notable for its distinctly flavoured  oil. Many strongly-scented plants thrive in British Columbia, including common or white yarrow (Achillea millefolium), a species well known around the world for its healing value.

Yarrow, a member of the Aster Family (Asteraceae), grows as a herbaceous perennial with leaves and flowers arising from creep­ing underground or near-surface root stocks. The aromatic fern- or feather-­like leaves are finely divided and feel soft. Leaves cluster mostly at the base of the flowering stalk; these leaves are mainly 10-15 cm (4 – 6 inches) long. Many soft small hairs cover the plant making it appear greyish-green.

Tiny flowers crowd into small flower heads, that are further arranged into flat-topped clusters on stalks up to 100 cm (40 inches) tall. Each small flower head in the cluster consists of three to eight tiny ray flowers with a strap-shaped petal, and disk flowers with only reproduc­tive parts. The flowers are white to pinkish and appear from May to October depending on the local cli­mate. On south Vancouver Island they even bloom as late as December. The flower tops dry and turn brown by the end of summer, produc­ing many one-seeded, smooth and flattened fruits.

Yarrow occurs from low to high elevations and often becomes weedy in disturbed settings. This herb thrives in coastal meadows and the arid sage brush steppe of the interior of BC. We also encounter it often in the lower part of the alpine zone during our studies of BC’s mountain flora. You can find yarrow throughout British Columbia and over much of North America. It also occurs across northern and central Europe and Asia. 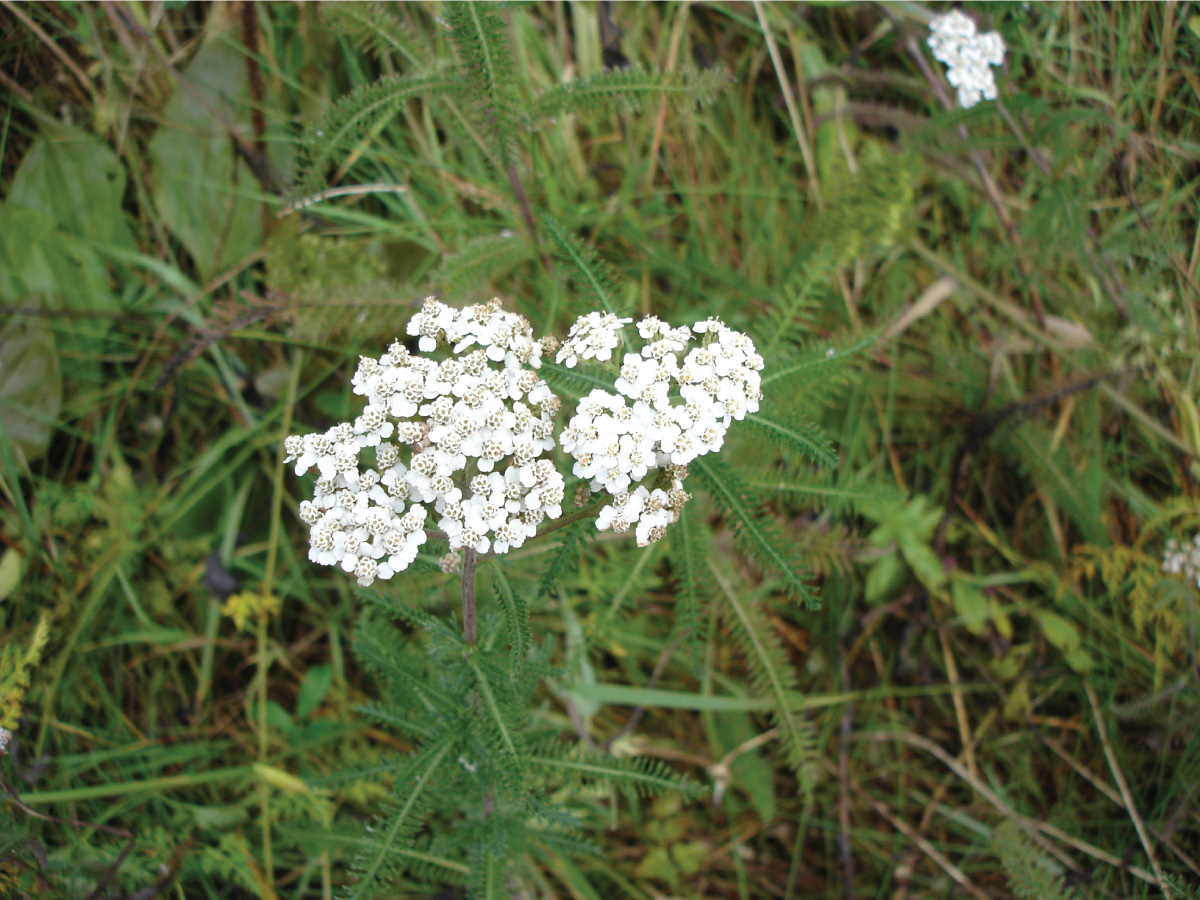 Yarrow has been valued as a gar­den plant for centuries.  Various forms are available for you to purchase as plants from garden centres and through mail order. Seeds of many colourful selections, especially red and pink shades, are sold through seed catalogues. Plants are easily raised from seed sown into light seed compost or peat pellets in the fall or spring. Rhizome divisions transplant easily too.

Dwarf varieties thrive in rock gardens. Larger types are suitable for mixed borders, perennial beds and the cutting garden. When mowed reg­ularly, yarrow forms a soft-scented ground cover especially valuable for dry lawns. Yarrow is also an excellent subject for the xeriscape garden. This tough plant  has been suggested for erosion control on slopes too. 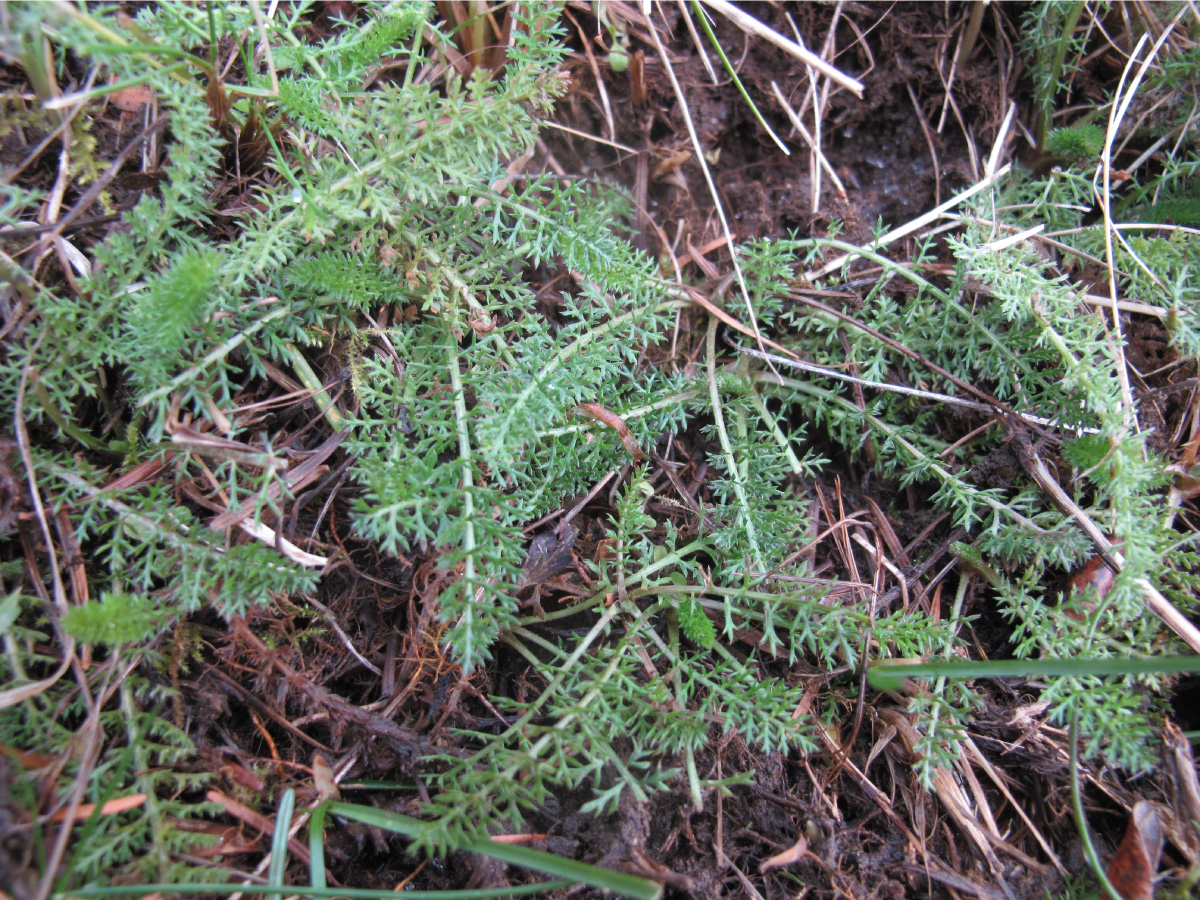 Many First Nations Elders of the B.C. inte­rior value yarrow as a medicine, espe­cially to treat sores. Ulkatcho people of the west Chilcotin soak the leaves in hot water, then apply them in a poultice to sore mus­cles. This same poultice can also be used to treat saddle sores on horses. Washed and crushed roots were rec­ommended for toothaches. Various teas and concoctions were prepared for internal problems and as a gener­al tonic. Fresh leaves crushed and rubbed on the skin or put to smoke away in a fire act to repel mosquitoes.

Herbal users should be aware that yarrow is “phototoxic.” Skin exposed to crushed or rubbed yarrow may become irritated when exposed to strong sun.

The name Achillea derives from the Greek hero, Achilles, who well knew the medicinal properties of the plant. The finely divided leaves are responsi­ble for the species name “millefolium” meaning “thousands of leaves”. Yarrow is hardy to zone 2 in Canada.