There isn’t a month of the year where European Wall Lizards are completely torpid here on Vancouver Island. We are nearing the solstice, and lizards are still out and about. 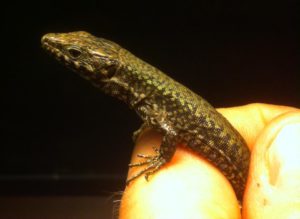 I went out with my wife and daughter to Crumsby’s this weekend, and later, we had plans to do some shopping – and groceries – the usual weekend activities.

But the weather was nice – 7 degrees Celsius and sunny – so I suggested we divert to the Moss Rocks area for a few minutes and see if we could find a European Wall Lizard. My wife now accepts such requests as normal – we may be talking about christmas shopping and trying to entertain our daughter, but she knows I am looking for lizards if it is sunny. At least lizards in a cup, tub, or zip-lock bag don’t smell as bad as some of the road-kill we have collected.

I saw – or more accurately heard – the first lizard just as I stepped out of the car. Within seconds I had evidence of lizards active in December. They were high up on the bedrock wall along May Street. A patient wait of a few more minutes was rewarded by sight of three lizards which crawled out of a cold crevice, and lined up to absorb as much heat as possible from the sun. 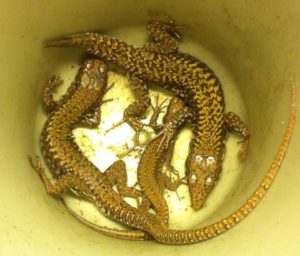 Farther along the street was a concrete wall covered in roots – an easy place to ambush a lizard. There were at least 8 lizards on that small concrete wall – I caught these three in two minutes. They now are preserved a cataloged as 2127 in the Royal BC Museum’s herpetology collection as evidence of the winter activity of an invasive lizard.

Interesting tidbit of information was that the lizards were warm to the touch – they must find really effective basking sites to warm themselves that much above the ambient air temperature. The rocks themselves were not that warm.