Saltation Peppers lizards all over southwest BC

Saltation – the way we describe the jumpy movement of animals or plants when they get a transport boost from people. European Wall Lizards now are confirmed from Nanaimo, Mill Bay, and throughout Saanich from Brentwood Bay to Commerce Circle (VanAlman Road area), and there is an isolated population on Triangle Mountain in Metchosin. European Wall Lizards also have been transported to Denman Island and have been there for around 6 years. These jumps and subsequent spread in new areas really allows the European Wall Lizard to rapidly invade new areas.

Every now and again I get reports of single lizards in Victoria – like one at a condo development on Faircliff Lane. One lizard does not start a population – unless it is a female loaded with eggs. Lucky for us European Wall Lizards cannot reproduce asexually like other lizards can (examples: Desert Grassland Whiptail, Mourning Gecko). It seems that the early report from Faircliff Lane was correct – but when I looked years ago the population was at a very low density. Today I got a new tip that Wall Lizards are super abundant just south of Faircliff Lane on May Street near Moss Rocks.  I also have reports of a single lizard near Tillicum Mall. No others have been seen since – hmmm perhaps it is a matter of time. 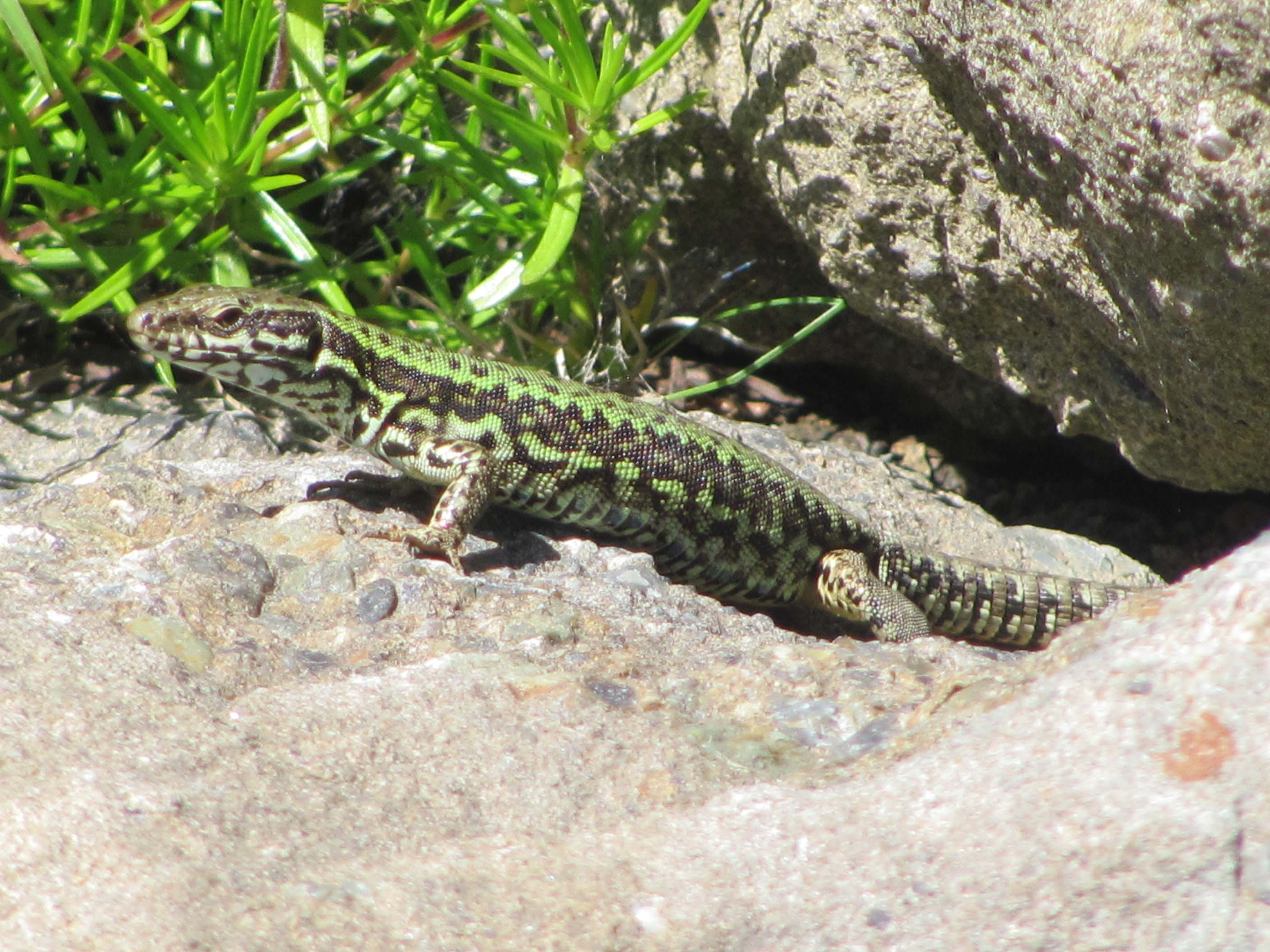 However, friends and colleagues up farther north, near the junction of Wallace Road and Durance Road and on Sparton Road report hundreds on their property – and these lizards are active even in winter if the sun is shining. Friends with a family farm near the junction of Central Saanich Road and Styan Road started to see Wall Lizards on their property only a few years back. The population on Triangle Mountain is thriving. And it was easy to find adult and hatchling Wall Lizards on the Saanich Fairgrounds.

Like English Ivy and Himalayan Blackberries – I think we are stuck with these lizards. 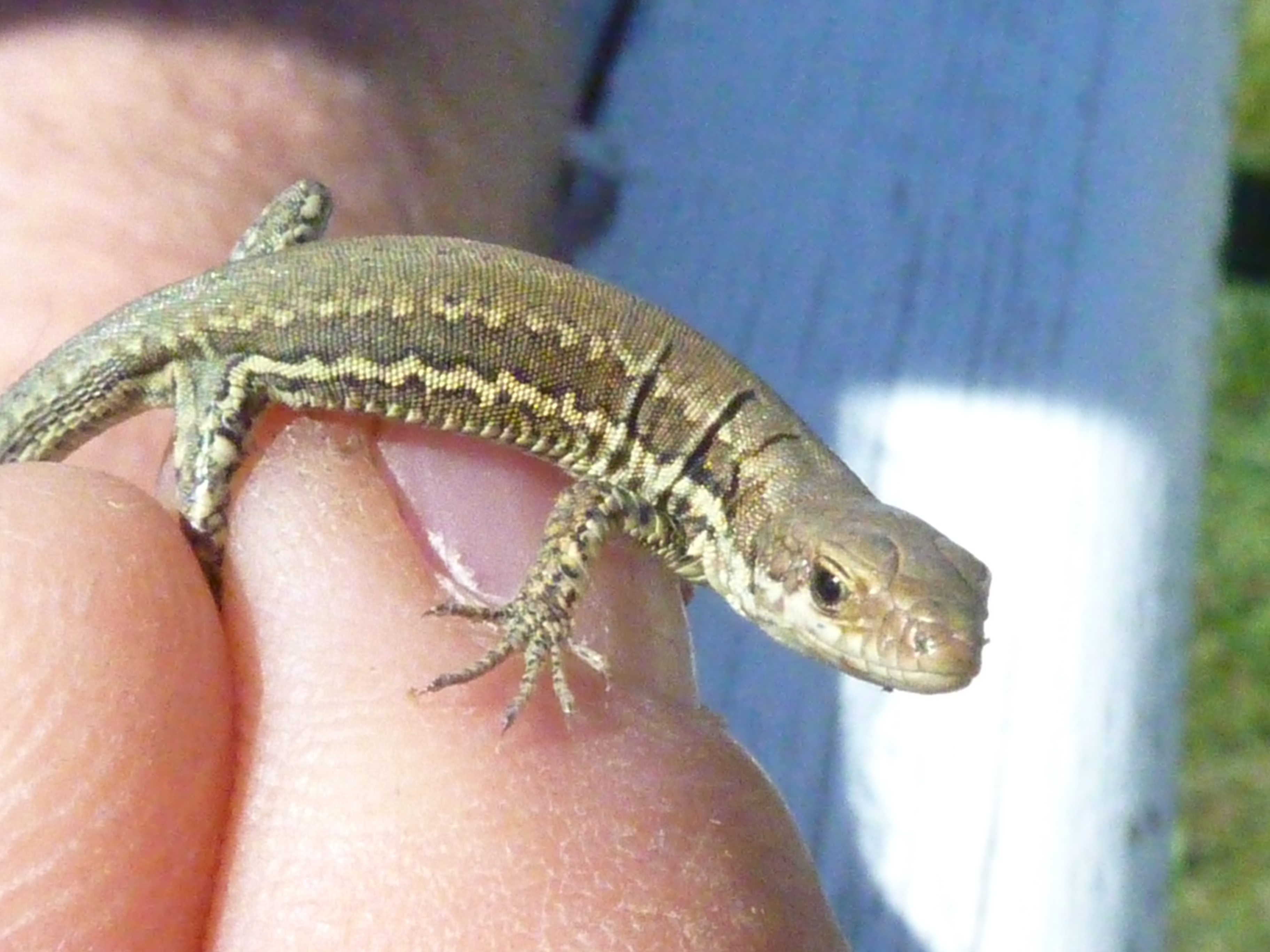 Last week I heard comfirmation of Wall Lizards near Hillside Mall in Victoria. I had heard rumors of this population years ago, but had never been given an address to search. This weekend I got that address and had a look around the neighbourhood. I walked the length of Edgeware Road and asked residents if they have seen lizards. Homeowners only a few houses from Doncaster Drive said that this year was the first year they had seen lizards – so perhaps as of 2014, this is the western end of the population. As I walked up Edgeware, the reports got more and more disturbing – with people saying things like, “we usually see young ones, and a few larger ones” (this indicates plenty of reproduction), and one homeowner said “there must be hundreds of them” (up closer to Cedar Hill Road). I decided to chat with people on Stroud Road – one block north –  and one lady pointed to the a rock wall where their Wall Lizard is living up to its name. I also saw poop – looking very conspicuously like lizard poop – on some rocks in a garden just east of Oswald Park on Stroud Road. 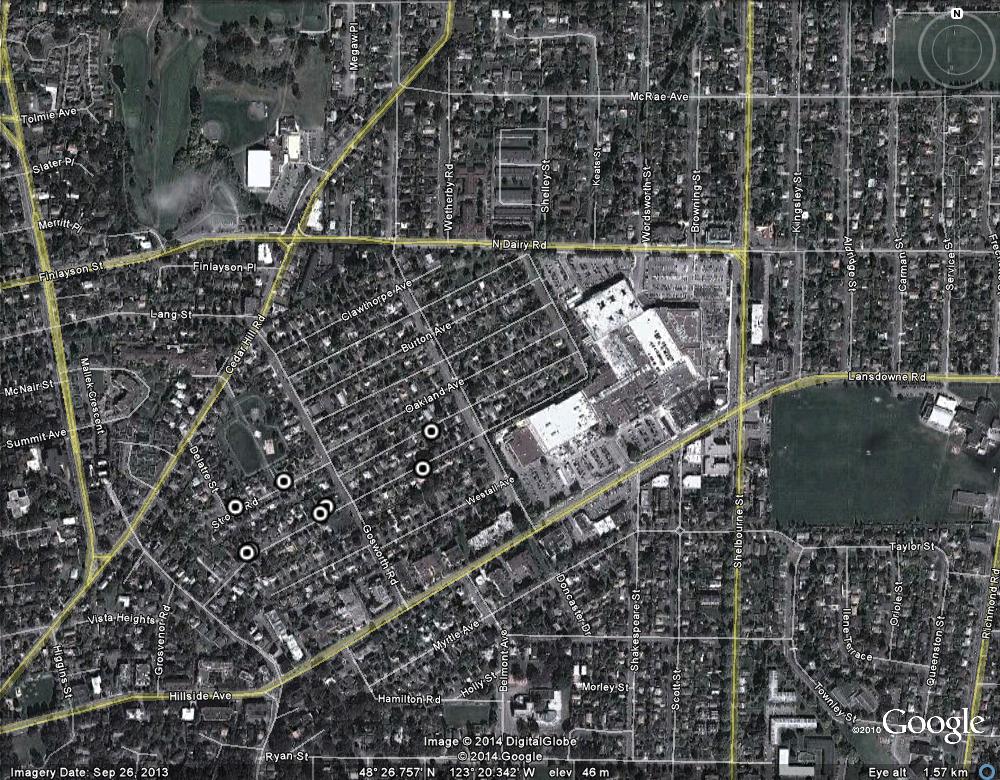 This hot dry summer likely has done wonders for the European Wall Lizard – they may get two clutches of eggs successfully hatched. This lizard is reputed to have been released in Saanich in 1970, and 40 years later they had spread across the peninsula, and to Triangle Mountain. The Nanaimo, Denman Island, Mill Bay, and Hillside Mall populations are relatively new, with colonisation in the last 6 years.

I live on McRae Avenue – a relaxed 10 minute walk at most from Edgeware Road. We bought the house because it was within walking distance to groceries and shopping, to minimise our use of a vehicle, and had a garden which was a blank-slate. We have ripped out the lawn and have cinder-block raised beds for vegetables and berries – and it will be paradise for lizards. If the Wall Lizard spread across the Saanich Peninsula within 30 years, they’ll do well in the urban environments in Victoria. Wood piles and rock walls, plus complex garden vegetation gives them plenty of cover from predators, shelter from frost, and there are loads of crawling insects and spiders for prey. If Wall lizards are eating ants, I suspect they will be welcomed with open arms by residents in my neighbourhood. 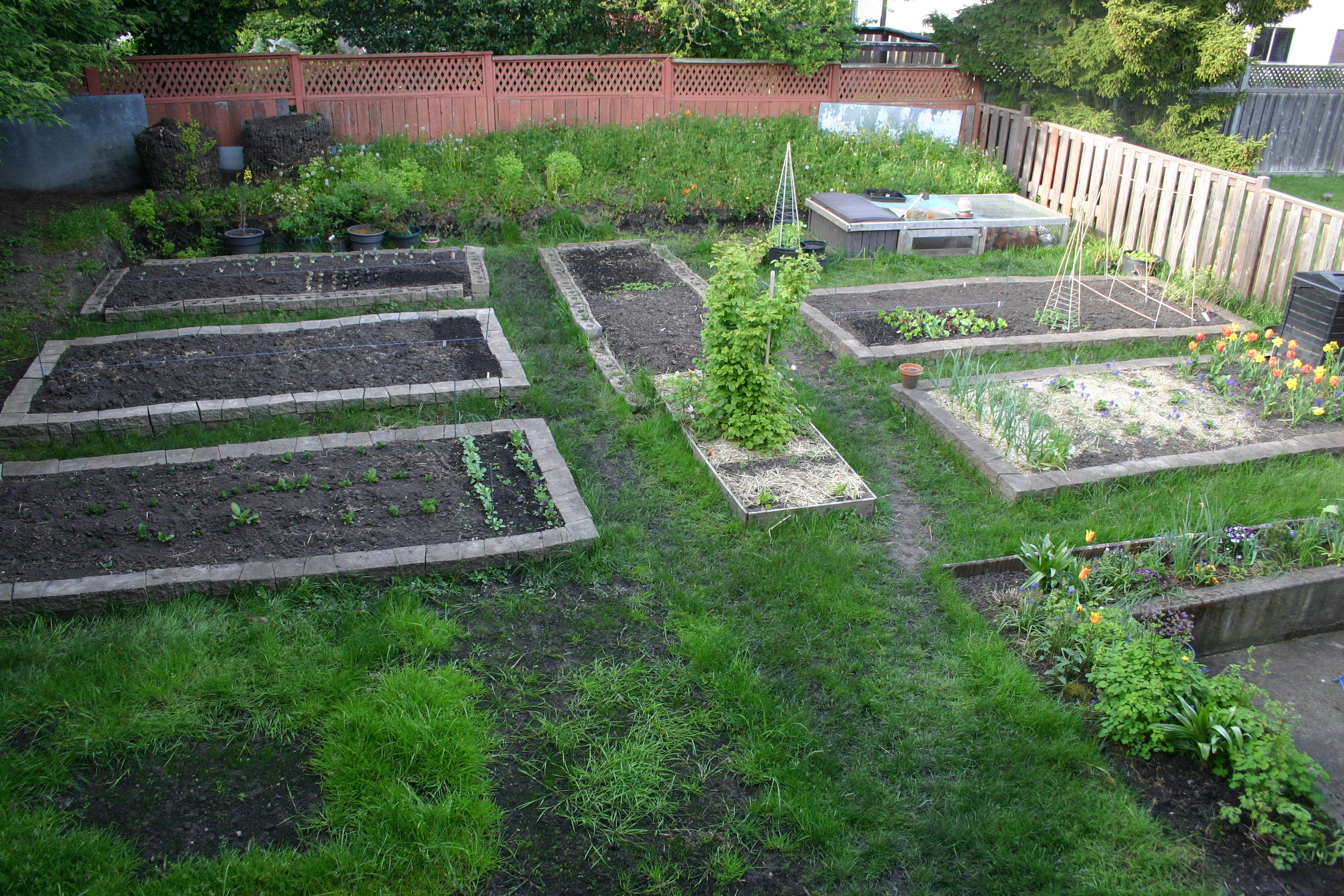 I expect Wall Lizards to arrive in my yard in the next 10 years at the very most. Probably far sooner.

If you live near Hillside Mall and have these lizards in your yard, please email me at the Royal BC Musem with pictures so I can verify the species (ghanke@royalbcmuseum.bc.ca). If you are not sure of the identity of the lizards in your yard, in a previous blog I outlined the differences between the European Wall Lizard and the Northern Alligator Lizard.

Here’s two iphone snapshots from this weekend – this hatchling was maybe 6 cm and as thin as a pencil – look carefully – they can be anywhere. In crevices between concrete pacing stones, on fences, on your house, window ledges, rock walls, cinderblock walls, around garden ponds – and wow are they fast.

From about 1 meter away: 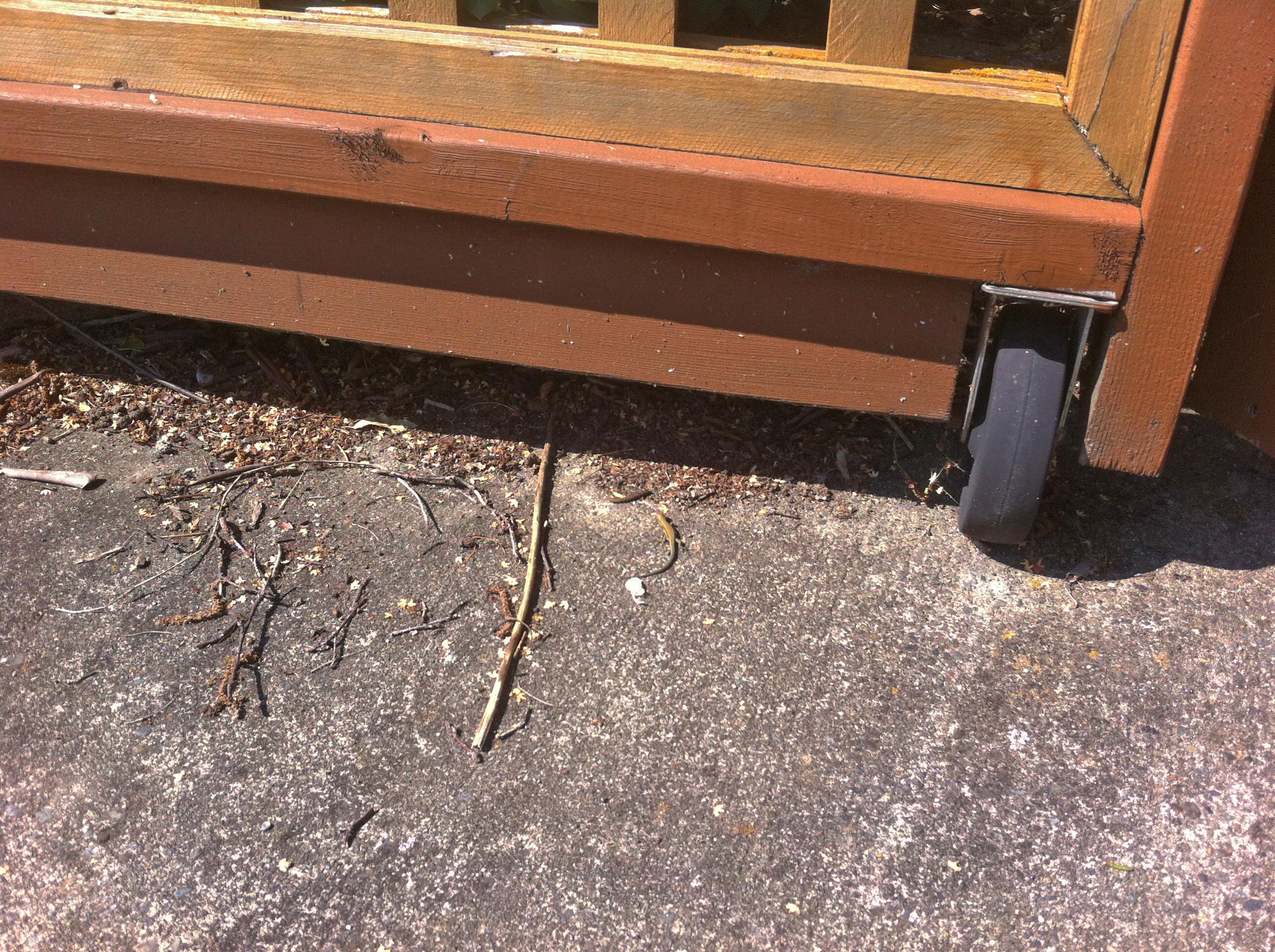 From only about 20 cm away (this lizard had no idea it was about to be attacked by a zoologist – but it was too fast and got away). 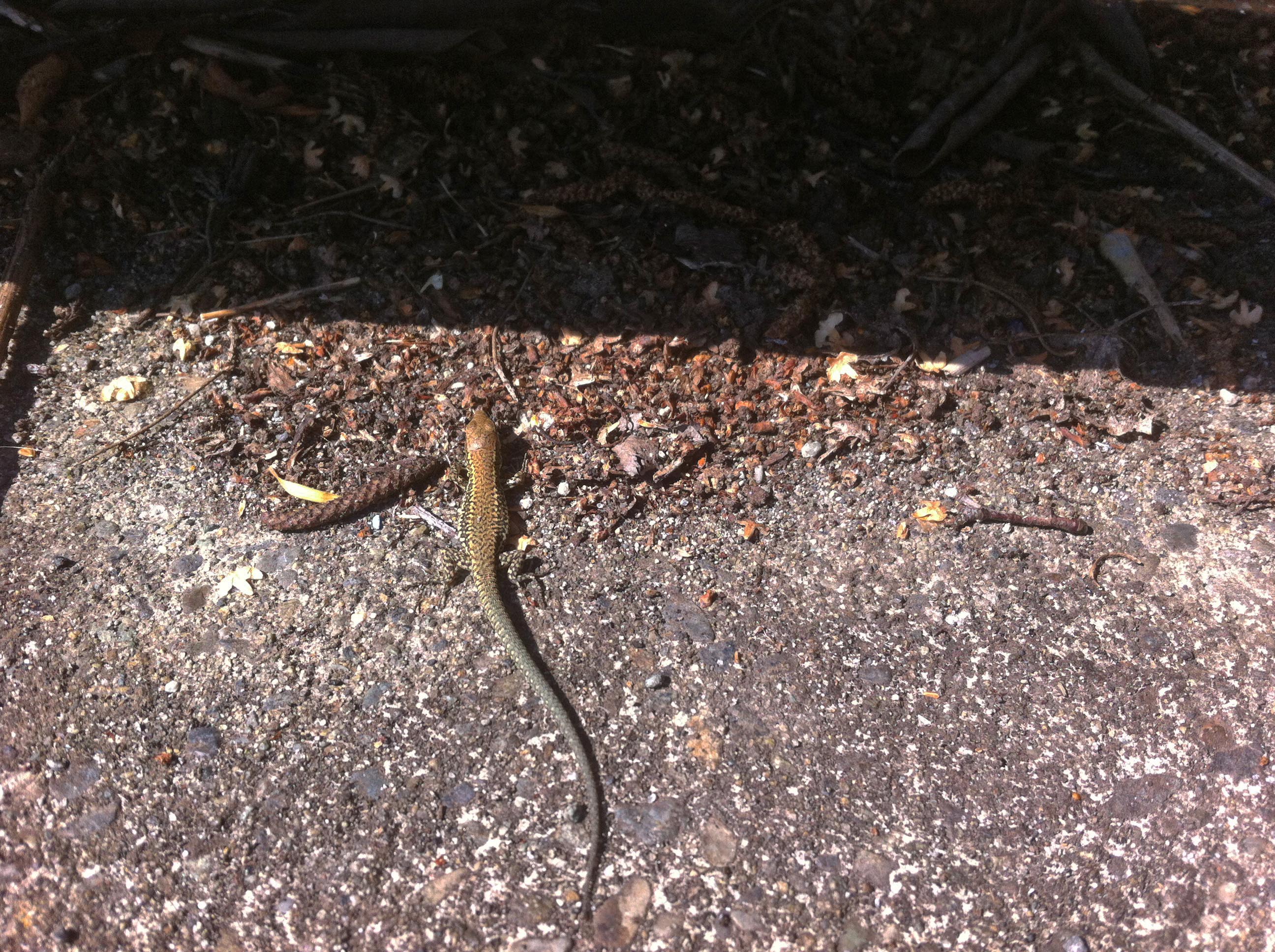