A Curator’s Garden: Early May

After picking up a range of starters at the local nursery, we are finally ready to plant the rest of the beds in the garden. A pumpkin starter arrived from the garden of Steve and Amy Lewis—they started a few too many mega-pumpkins—we were happy to get a seedling. Wasabi is the experimental plant for this year. 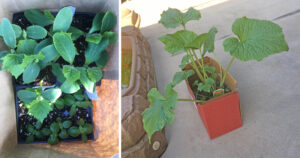 Soil was turned over, manure mixed down a bit, and weeds were pulled in preparation for planting. One of the most invasive plants in our front garden is Calendula—ours has a gorgeous orange flower, but this flowering plant had overgrown a third of the front vegetable bed.

Seeds arrived by mail, and we bought a range of peppers, some hotter than others—the scorpion pepper will be interesting.

All our tomatoes went in, as did cabbages, and we have a few hundred New Zealand spinach plants poking up. Ladybird beetles are pupating and there are loads of adults, so let’s hope they keep busy dealing with aphids. 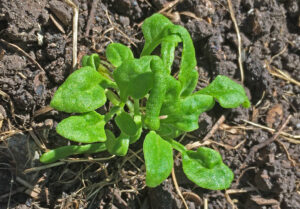 New Zealand spinach (above) has an odd textured leaf and is not to everyone’s liking, but as it’s an edible weed, I am OK with it. Between New Zealand spinach, alexanders, kale, chives, oregano and leeks growing wild in the garden, we will always have some garden fresh food. The lettuce we bought as starters has overgrown its pot! 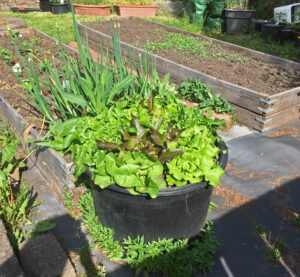 Lizards are active and emerge by 08:30 as the sun hits the front garden. Two larger lizards seem to have replaced the three yearlings that were on the back fence, and our gravid female still has not laid eggs. Two lizards seem to have been attacked—tails were shortened—but that seems to be it for lizard drama in the last few weeks.

Bewick’s wrens are nesting in our back yard, bushtits are stocking up on spider webs (and the cotton thread we use to tie up plants), crows are building nests, robins have hatched over a week ago, and Anna’s hummingbirds, chipping sparrows and house finches pop by regularly to liven up the garden.

Now to set up the watering schedule and let nature do its thing.