Portsmouth To Esquimalt: Artifacts from the Royal Navy

This establishes a direct link between the Royal Navy Base in Portsmouth and Esquimalt.

As many of the Royal Navy ships would have been resupplied at Esquimalt, bottles and other artifacts from British Columbia companies will likely be found in Portsmouth. 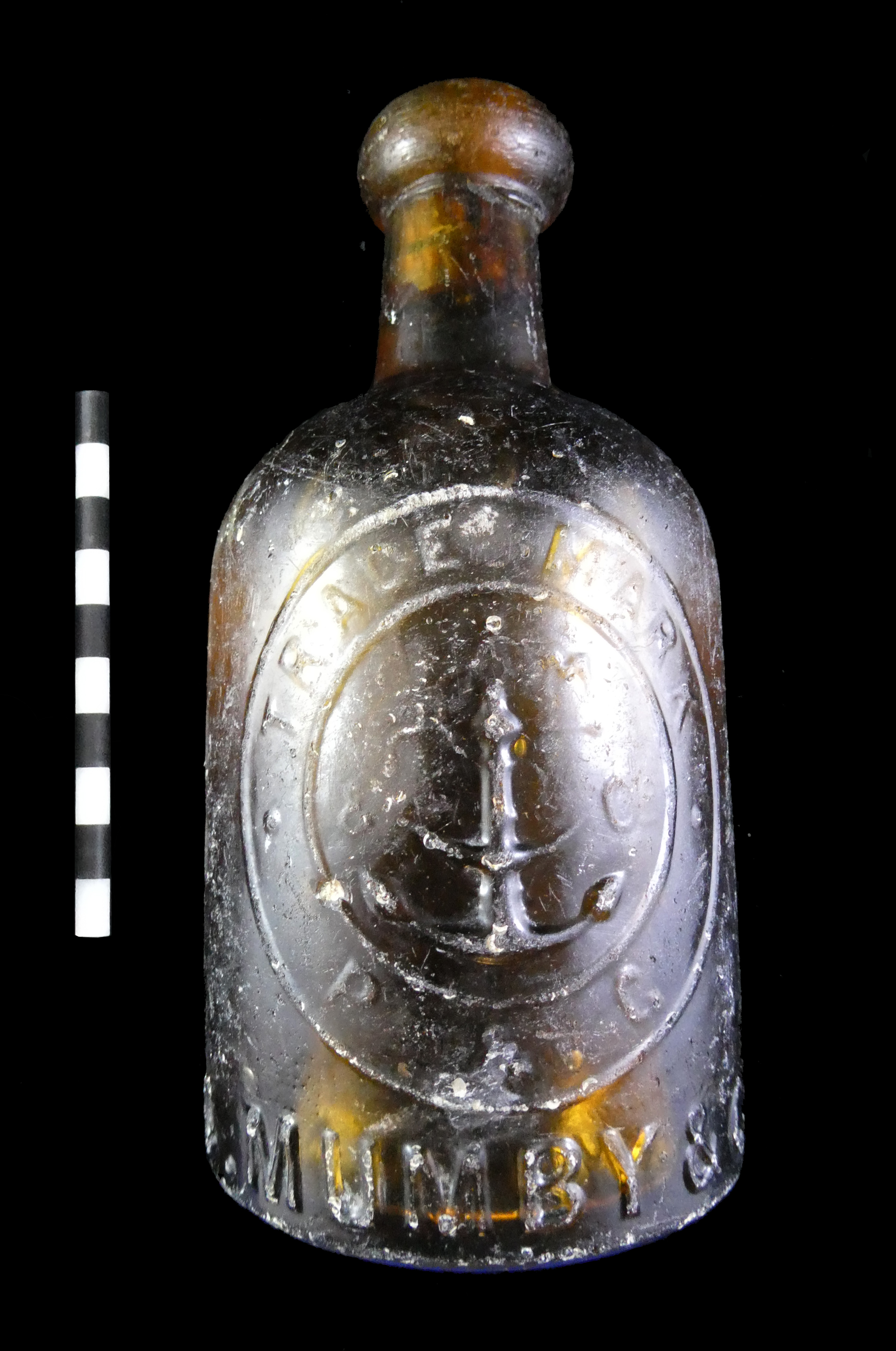 The first of these two bottles, is a short squat, amber coloured, cylindrical, bottle with a hand finished blob top.  It is 15.5 cm. in height and 7.7 cm in diameter.  Remarkably the cork is still in the neck and the bottle might still have the original contents.  The front is embossed C. MUMBY & Co with a double circle embossed TRADE MARK P & G and a fouled anchor in the center.  A bottle such as this would likely date between 1884 and 1910.  Hannon and Hannon (1976) state the term trade mark on Mumby’s bottles post dates 1884. 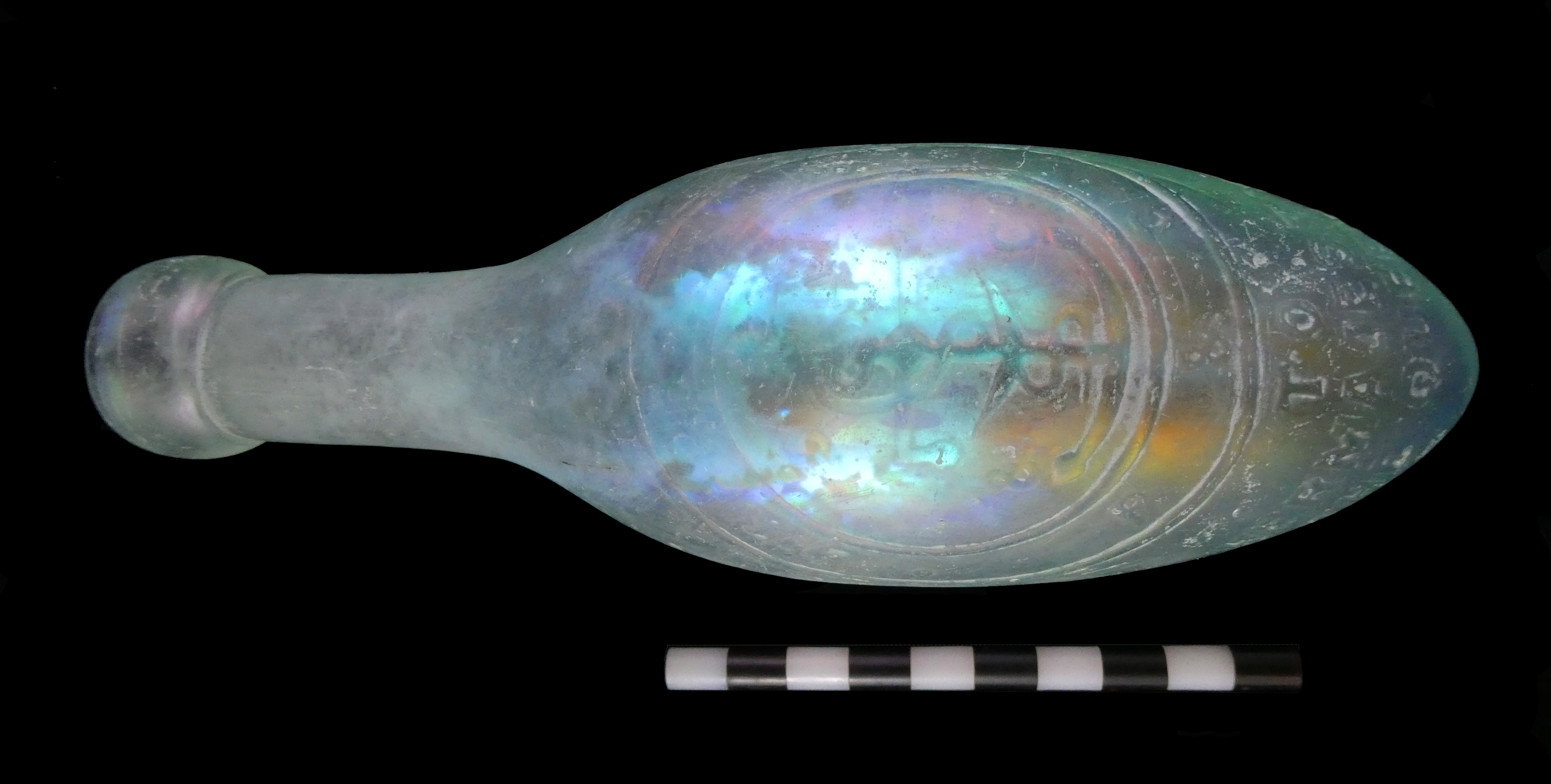 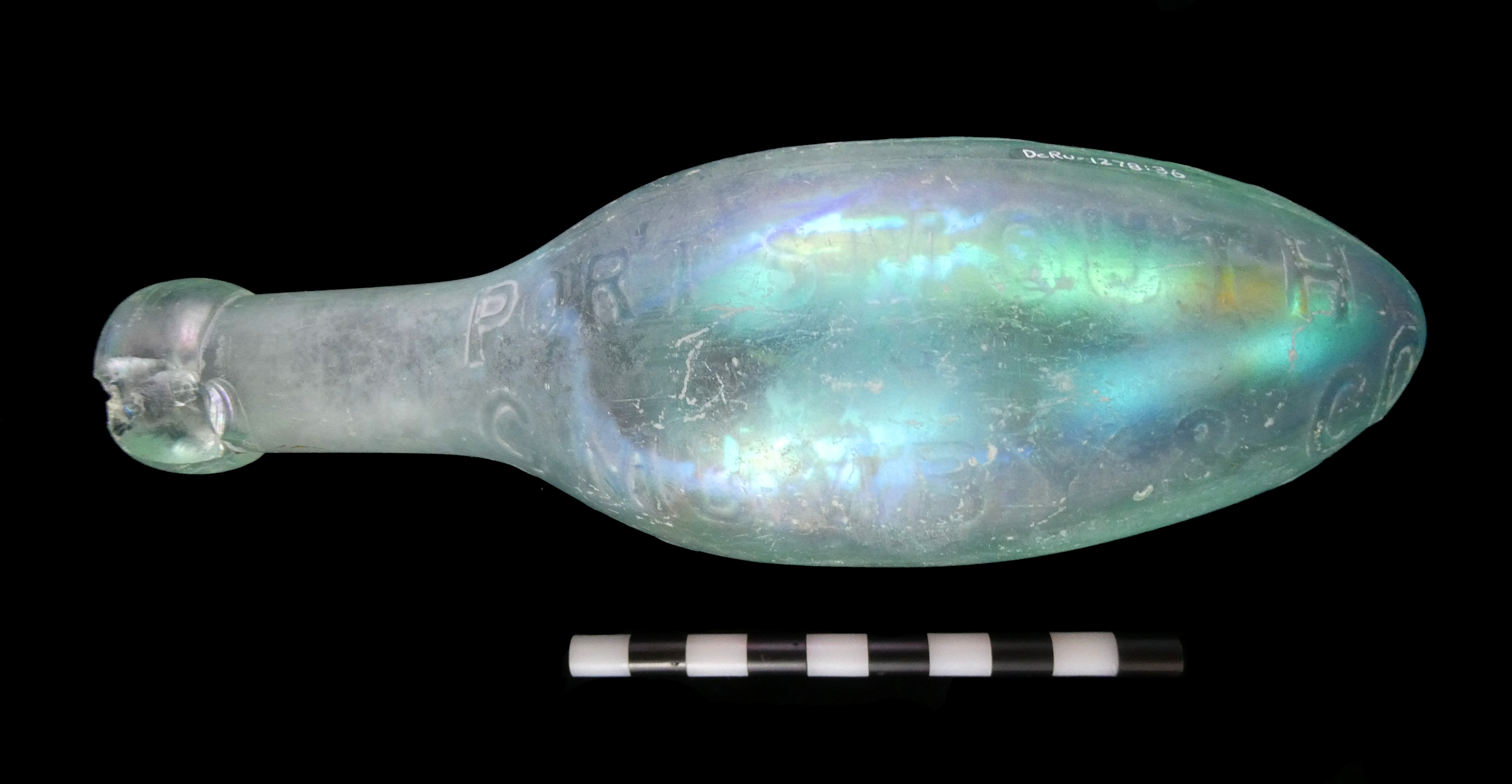 Fig 2b C. Mumby bottle from Esquimalt Harbour (reverse side). Photo by author

The second, is a “torpedo” shaped bottle also known as a Hamilt on style named after the inventor.  In aqua coloured glass, it has a hand finished blob top. It is 19.0 cm in length and 6.1 cm at its widest diameter.  On the front it has a double circle with TRADE MARK at the top and P&G at the bottom with the fouled anchor in the center the same as the one in figure 1.  Above the circle only the last two letters are legible as ER the phrase was likely SODA WATER MAKERS and below the circle TO HER MAGESTY THE QUEEN.  On one side it’s embossed C MUMBY & Co PORTSMOUTH AND GOSPORT on the opposite side.  This bottle likely dates between 1884 and passing of Queen Victoria in 1901.

The torpedo style bottle was initially designed to withhold the pressure of the carbonation as well as keeping it from standing up right allowing the cork to dry and the carbonation to escape. They were used extensively in the mid 19th century and a few companies kept the design until the start of the 20th century.  In British Columbia, there are no known bottlers that ordered torpedo style bottles embossed with company names. 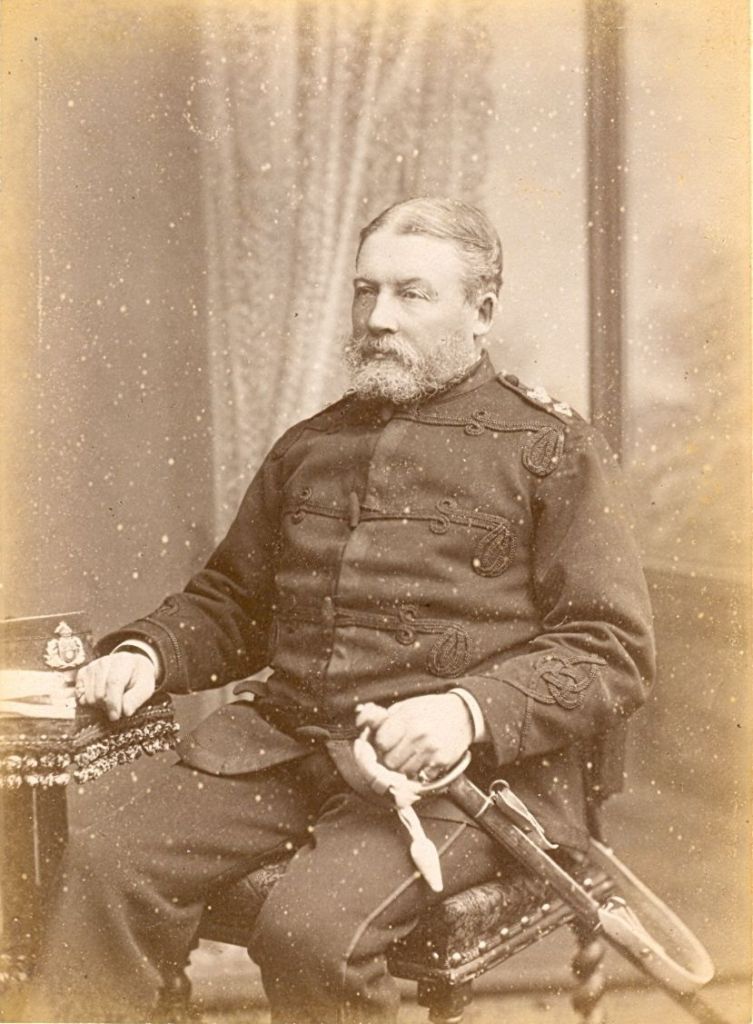 Starting on the mid-19th century, both the Royal Navy and British Army were recognizing alcohol as a serious problem.   Lloyd and Coulter (1963:96) state: “Heavy drinking especially on shore, diminished towards the end of the century when tea and coffee were fast supplanting grog…”   Increased levels of technology required higher levels of training that had little tolerance for drunkenness.   In addition, the temperance moment was having an influence.  As a result, many of the Royal Navy Clubs and regimental canteens were supplying their own soft drink bottles with club names and regimental crests (Bown 2015).  A second advantage of these products was the carbonation which acted as a preservative keeping the contents for long sea voyages.

It would appear Charles Mumby saw an opportunity and was close at hand to supply the Royal Navy with a good supply of non-alcoholic beverages.   Even his choice of logo with the fouled anchor was likely designed to appeal to the Navy.

Like many prominent businessmen in the Victoria era, Mumby was an officer in the local militia.  This may have given him the necessary status and connections to supply the Royal Navy.  The following was provided by David Moore at Historic Gosport (2019):

“Charles Mumby set up business in Gosport in 1849 as a chemist and manufacturer of mineral waters.  His shop was at 47/48 High Street.  His supply of water was a large bore hole in the yard at the back of the shop, which had rear access from North Street.  At 345 feet he hit natural water in the chalk subsoil.  He installed machinery to increase the production of natural ice.  He produced famous soda water, ginger beer and lemonade, selling across the south of England.  He supplied the Army and the Navy, receiving a Royal Warrant from Queen Victoria.  The manufacture of mineral waters continued at his original premises in the High Street, and an office was opened up at Portsmouth, first at 71 St George’s Square, then, from the late 1870s, at 34 The Hard.  Charles Mumby was a Poor Law Guardian, a magistrate, a County Councillor for Hampshire, and sat on innumerable public and social committees.  Charles retired in 1885 leaving the business to his son Everitt.” It was floated as a company in 1898.”

WikiTree (2019) also states Mumby and Company was awarded a Royal Warrant to supply King Edward VII and the company continued to supply the Royal Navy until about 1970. 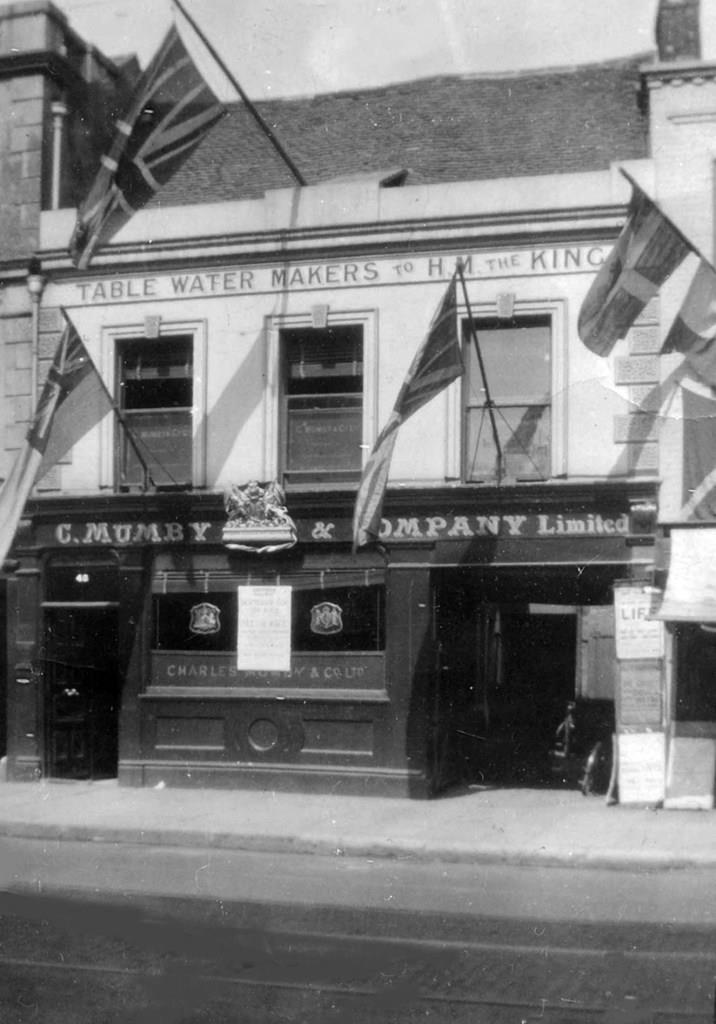 Located at 47/48 High Street sometime after the reign of Queen Victoria as the banner states TABLE WATER MAKERS TO HM THE KING. His business in Gosport was conveniently located within a kilometer of the Royal Navy base at Portsmouth across the harbour.