Museums across the world are going through paradigm shifts – a shift that calls for a transition of power and authority, and a transition from exclusions to more holistic models of inclusion. The Royal BC Museum has been working towards such shift through community history projects based on community engagement.

In this type of community-based heritage work, the goal is to work closely with previously marginalized groups for exploring, preserving and sharing self-identified communities’ heritage defined in their terms. Our hope is to facilitate the sharing of the self-identified communities’ diverse stories and heritage in our galleries and beyond from community perspectives and in community voices.

The Punjabi Canadian Legacy Project (PCLP), a partnership project between the Royal BC Museum and the South Asian Studies Institute at the University of the Fraser Valley, is one of the museum’s attempts toward this goal. Six years ago in the summer of 2013, the initial discussion that eventually led to the creation of the PCLP took place in the Fraser Valley. Almost four years ago in 2015, the PCLP Advisory Committee met for the first time, where Mo Dhaliwal initiated a call for a revolution to break traditional institutional boundaries. It led to the community gallery intervention event. At this time, Punjabi Canadian communities took over the museum space and inserted their stories and presence.

Years later, community members gathered at the Royal BC Museum again on May 4, 2019, to view the cumulative result of the long-term work – the bilingual Pocket Gallery exhibit Haq & History: Punjabi Canadian Legacy Project a Quest for Community Voices, and the kiosk featuring community voices in the Logging area in the Modern History gallery. The kiosk was installed based on community feedback from the intervention event, sharing family, union and industry stories in the sawmill industry, an industry that have woven the Punjabi Canadian stories in BC together.

Leading this community gathering in the museum, Mo Dhaliwal, on behalf of the PCLP Advisory Committee, started with the land acknowledgement, and thanked all ancestors, matriarchs, and all living things for getting us to where we were. Ravi Kahlon, then Parliamentary Secretary for Sport and Multiculturalism, acknowledged all the PCLP advisors and community participants. The most moving part of the event was when people saw their stories and images, interwoven into the community stories under the five themes. The five themes were identified by the communities around the province as the most significant to Punjabi Canadian history in BC – trans-Pacific journeys, families and homes, community celebrations and commemorations, sawmill experiences and community activism for rights and justice.

This exhibit marked a historic moment for the underrepresented Punjabi Canadian stories in BC to be collectively preserved and shared. ‘Haq’ means rights, and the PCLP is about putting community voices and history in their rightful places. Next to the kiosk in the gallery, Mo ended the event by leading three calls of ‘Inquilab Zindabad!’ – ‘Long live the revolution!’ (in Punjabi) – calling for continuous work to move beyond traditional boundaries and create new paradigms for heritage work.

The Haq & History exhibit, pending funding, will later travel to the communities who helped shape this work. 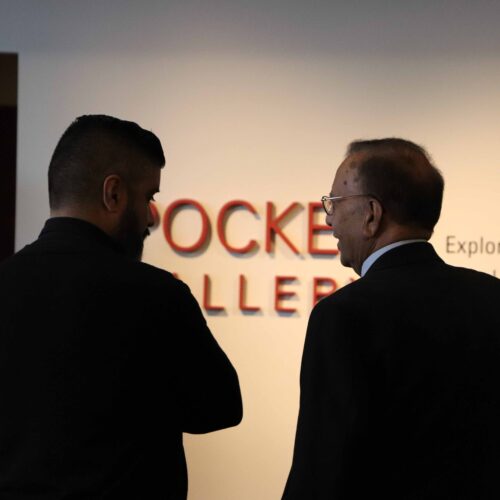 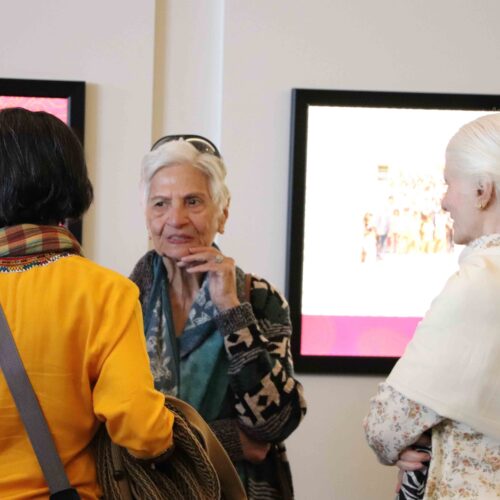 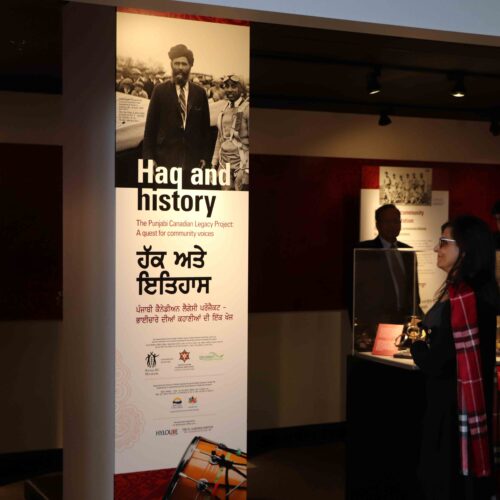 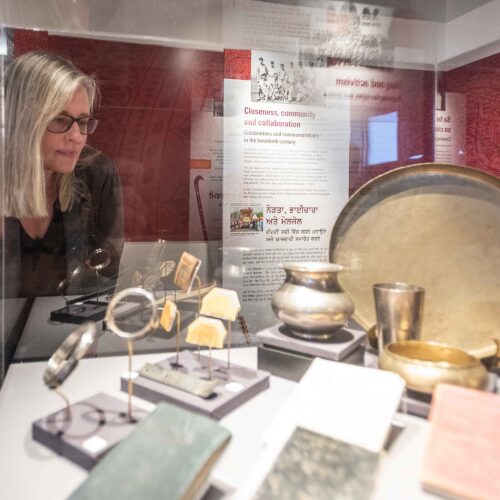 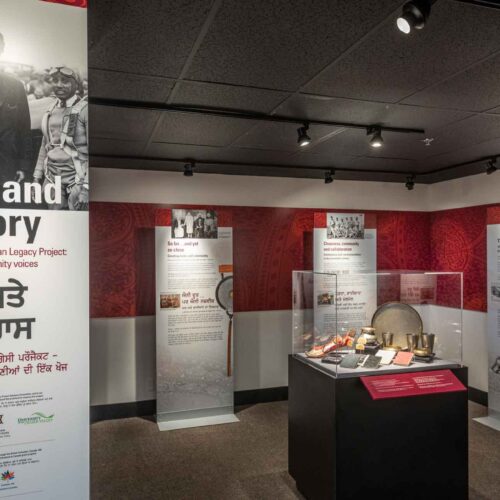 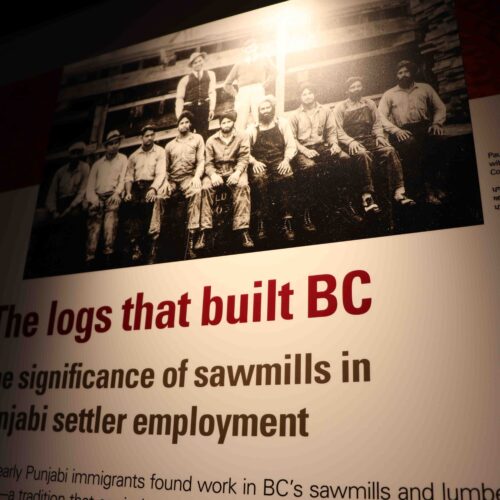 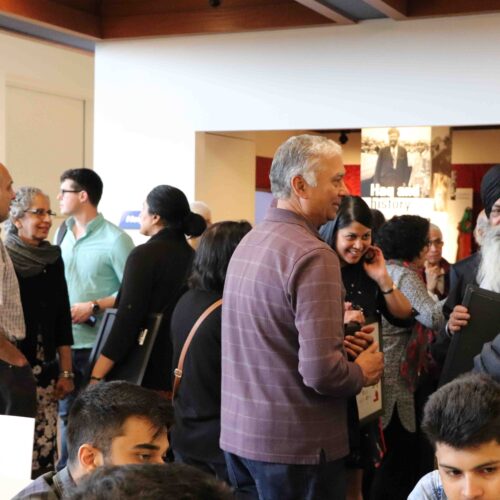 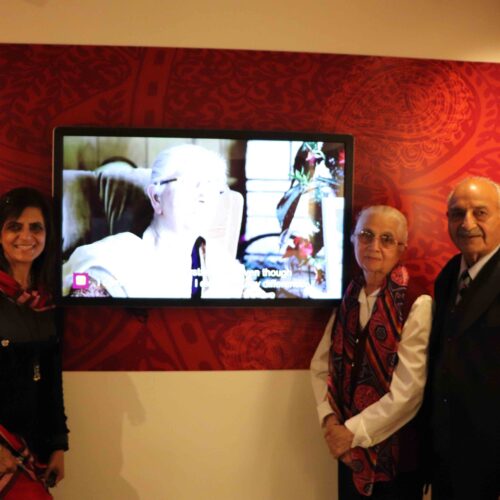 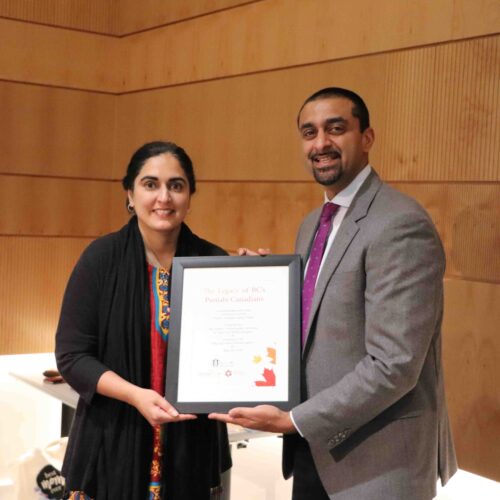 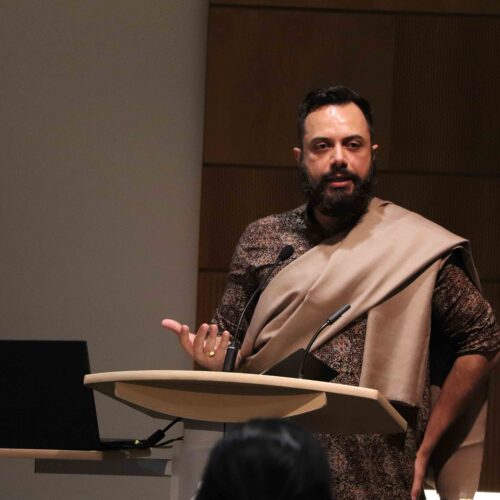 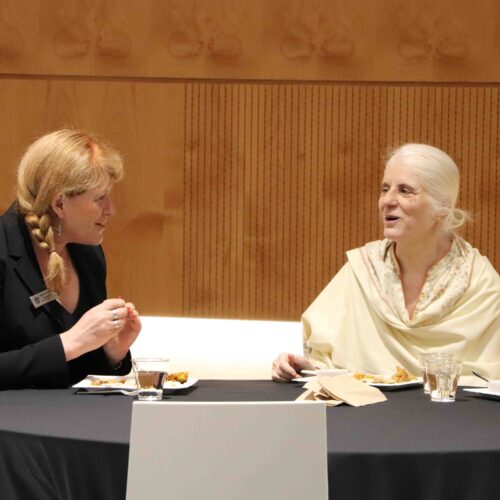 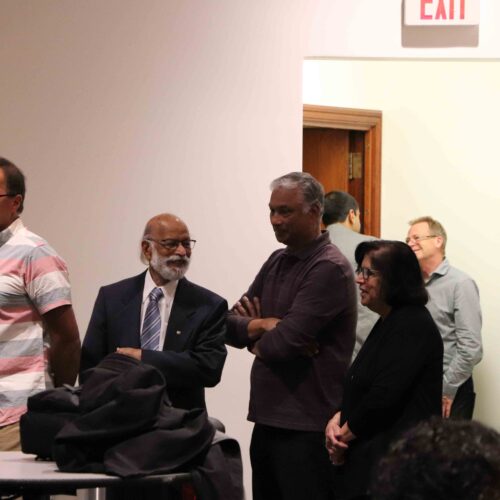 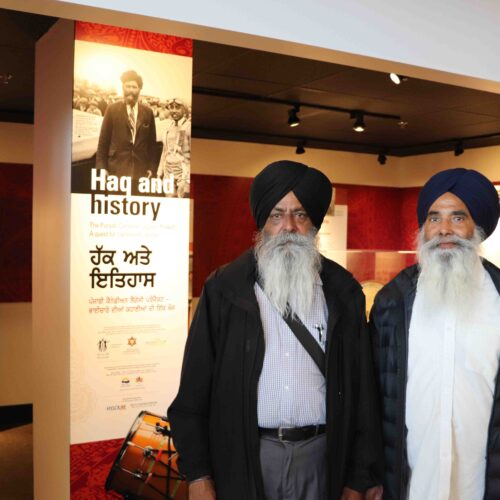 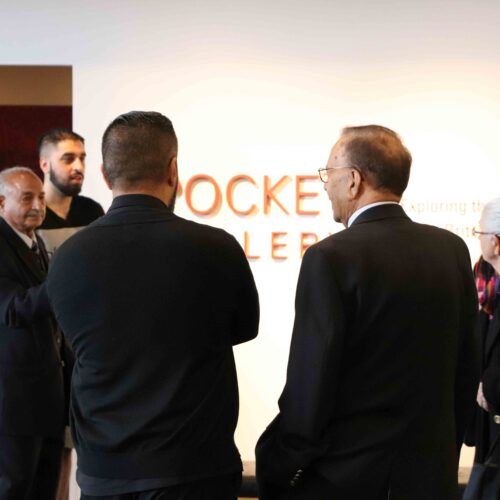 The kiosk in the Logging area in the museum permanent gallery. 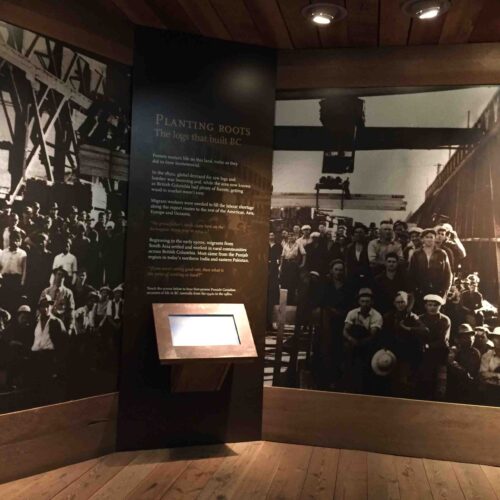 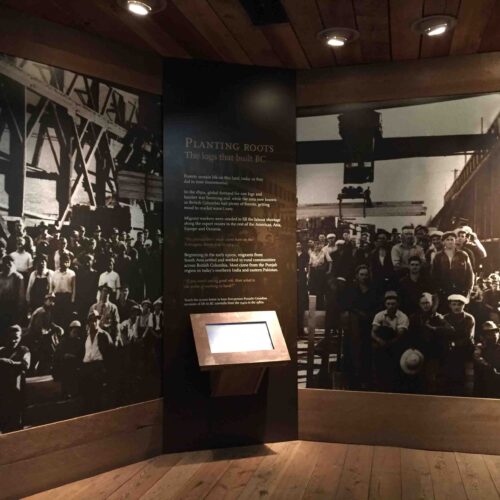 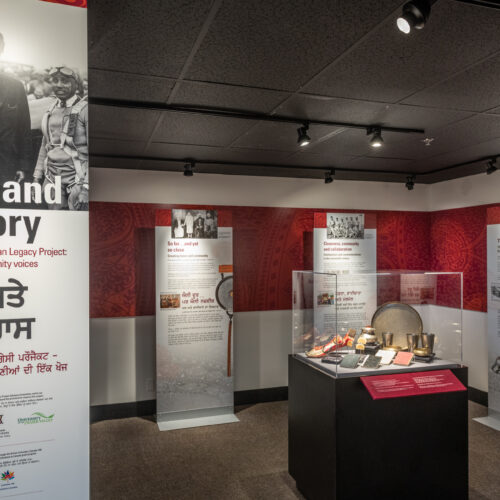 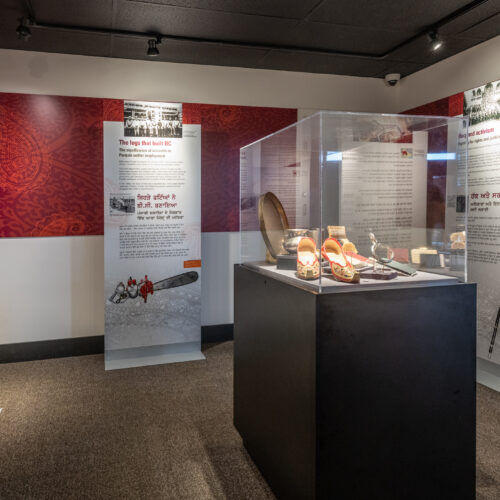 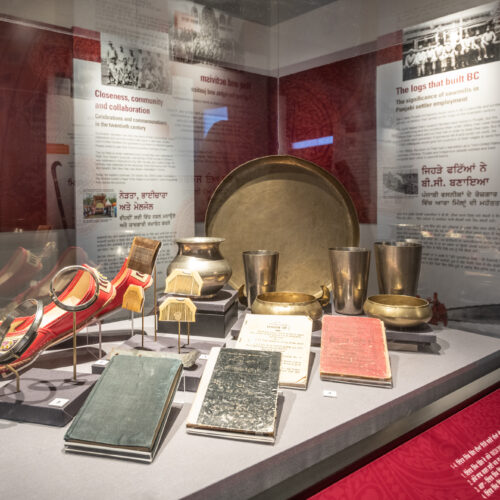 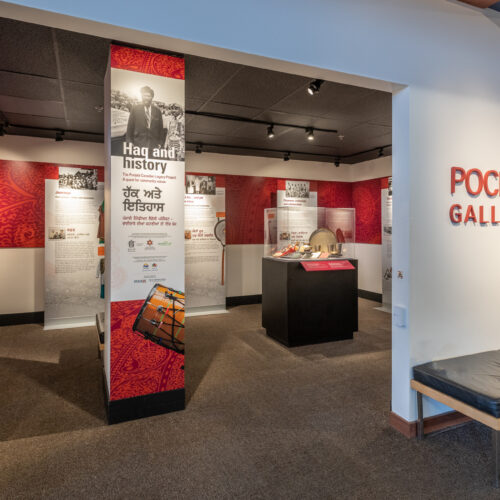 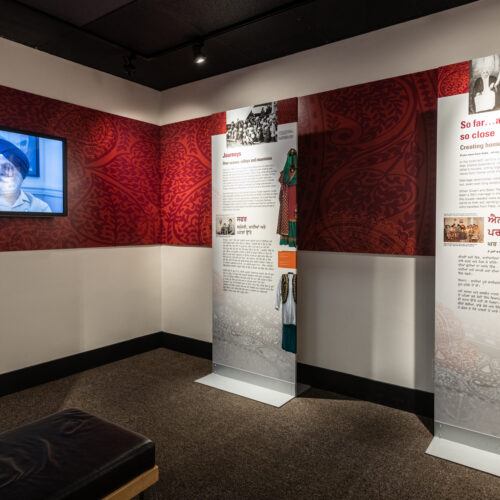 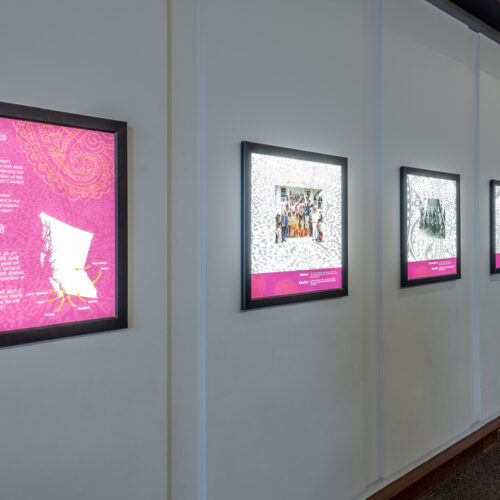 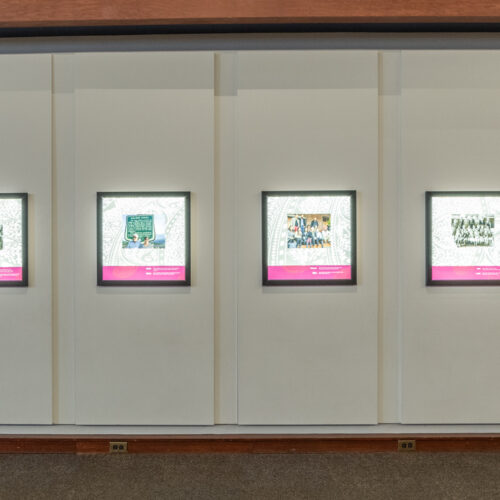