Lettuce is shipped to Canada regularly. Plastic-wrapped-produce crosses our border every day – it is inspected and then it goes to grocery stores across the province. The lettuce then gets purchased, bagged and taken home – sometimes for sandwiches, salads, or maybe for juicing.

This November 27th, a bag of leafy goodness was opened after crossing the international border with a stowaway – a small frog in lettuce from California. It emerged – and was taken to the local SPCA. From there it was sent to me at the Royal BC Museum for identification. 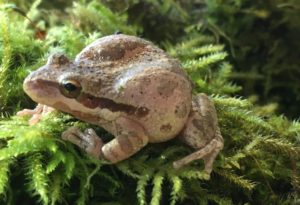 The stowaway was sent to me in a container filled with damp moss. 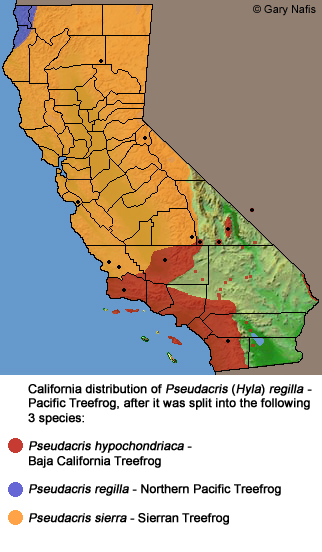 The range of the three chorus frog species based on mtDNA, from: http://www.californiaherps.com/frogs/maps/pregillamap3species3.jpg

Call me lazy, but if they are all lumped into one species – P. regilla – that makes my life easier. If the Pacific Chorus Frog was split into three species, then either I’d need to take a tissue sample to get an identification (and the frog would not enjoy that), or I’d need to know exactly where the lettuce came from. Odds are grocery records are pretty tight in this era of E. coli-tainted tracheophytes, but I have some doubt we’d ever know exactly where a given bag of lettuce originated. 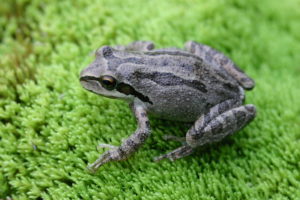 A Pacific Chorus Frog from just north of the Nighthawk border crossing in the Okanagan.

Let’s just assume we are lumping all the Pacific coast Pseudacris into one species – then this refugee regilla is the same species as our Chorus frogs in BC. If this is the same species, can I just let it go? No way. It is genetically distinct since it comes from so far away, and there always is the risk of disease transmissions posed by exotic frogs. At least this Californian frog didn’t come from a pet shop where it could encounter a range of other exotic frogs and their diseases.

To be honest, I am really impressed that the frog was contained in the first place – people have a habit of releasing stowaways rather than turning them in for examination. Years ago a couple returned home from Mexico and found a red and black snake in their luggage. The snake didn’t seem well, but they released it somewhere in Metchosin. Presumably that snake died, but if it had been a gravid female, it could have deposited 7-10 (or more) eggs, and we’d have an instant population. What species had infiltrated their luggage? I have no idea – it could well have been venomous. When I was an undergrad student, a red and black snake appeared in the pet trade in Winnipeg – it was labeled Honduran Milk Snake and looked like this. I assumed it was harmless based on the old rhyme:

I was wrong – the snake in the pet shop was rear-fanged and bit me. It was my first (and currently only) venomous snake bite. Bottom line is: Better to be safe than sorry. And as a member of IMISWG (Inter-Ministry Invasive Species Working Group) we always say that it is better to not release something, than try to clear out exotic species later. Turn in stowaways to your local SPCA or Natural Resource Officers. It is safer for the environment. Frogs obviously are harmless, but if you think you have something dangerous in your groceries – an Eyelash Viper in a bunch of bananas or a Brown Widow Spider in your Californian cauliflower – call your local Natural Resource office and arrange for a professional to remove the offending animal.

Above all else, don’t let it loose. 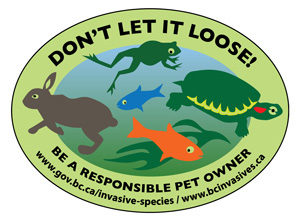