I don’t know if the title of this article is an accurate way to say fork-tailed lizard in German, but the Gabelschwanz-Teufel – the P-38 Lightning (the fork-tailed devil) could take a lot of punishment and still get home at the end of a sortie. A fork-tailed lizard has a parallel story – it has taken a beating and survived.

It is common to find lizards with regenerated tails or tails that are recently dropped – with their tell-tail stump. Sometimes the tip is lost, others about 90% of the tail is lost. The regrown tail segment is never as nice as the original and has different scale patterns and colouration. 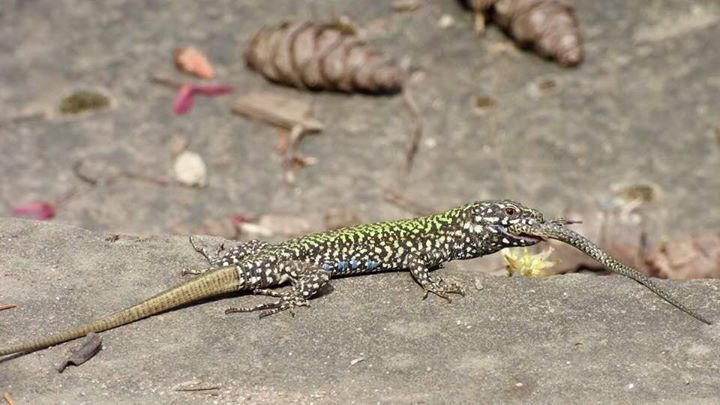 This male Wall Lizard photographed by Deb Thiessen, lost its tail near the base and the regenerated tail is obvious. Its meal had a perfect tail.

I have seen fork-tailed, even trident tailed lizards in photos – I remember images like this in the books I poured over earlier in my ontogeny. Had I ever seen one in person? Not until now. During my PhD thesis work, the only fork-tails I thought about were thelodont fishes known from Early Devonian rocks of the Northwest Territories.

This July, Robert Williams, a colleague from University of Leeds in England was here working on Wall Lizards. He was trying to determine if our native Northern Alligator Lizards react in any way to the scent of the European Wall Lizard. 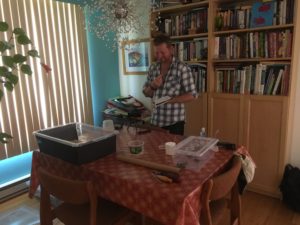 Live animals are not allowed at the Royal BC Museum, so Rob had to perform scent trials in my dining room. The lizards were held in containers in my kitchen – and I thank my wife for her patience.

The work helps give a frame of reference to reactions between the native Sand Lizard in the UK and introduced Wall Lizards, but you’ll have to wait to hear the results. While hunting Wall Lizards on Moss Rocks here in Victoria, Rob caught a fork-tailed specimen.

Since this was such a neat specimen I requested it be saved intact for the Royal BC Museum’s collection. Here is a photo of a fork-tailed Wall Lizard from England, but Rob had to come all the way to the Pacific coast of Canada to catch one.