We now have 21 orca specimens at the Royal BC Museum—the latest to arrive was T-171, a 6.07 meter female Biggs Orca which was found near Prince Rupert, October 19th, 2013. She had pinniped skulls, vibrissae (whiskers) and partially digested bones in her gut but was emaciated. Why was she emaciated?

During the necropsy, researchers discovered that T-171 had mid-cervical to lumbar vertebrae with severe overgrowth of the neural arches and lateral processes (noted as spondylosis in the necropsy) – the overgrowth looks roughly like popcorn or cauliflower – and had the effect of interlocking some vertebrae. This likely explains her emaciated state. Was she able to hunt? Was she supported by her relatives? 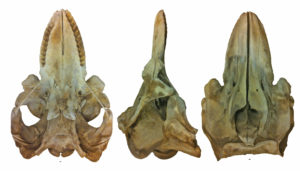 The skull of T-171 (ventral (palatal) view [left], right side [center], and dorsal view [right]) awaiting its catalog number and final place in the Royal BC Museum collection. 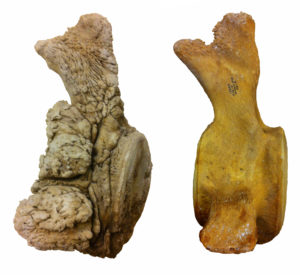 Comparison of T-171’s vertebra (left) with overgrowth of bone vs. the normal vertebra of another Biggs Orca (12844) (right). The two vertebrae are not from the exact same position along the spine, but the difference between the two is still shocking. 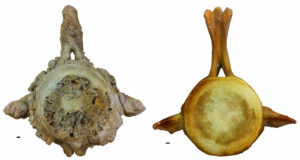 The overgrowth of the neural arches pinched the spinal chord of T-171; compare to a neural arch of 12844 (right). The vertebral malformation must have limited this animal’s mobility. It is hard not to anthropomorphize and imagine the discomfort due to this deformation.

T-171 originally was prepared for exhibit at the Royal Ontario Museum, but they wanted a clean articulated skeleton for exhibit. In contrast, we were interested in T-171 because of its skeletal malformation. To make a short story long, we came to an agreement with the ROM to transfer T-171 to the Royal BC Museum, and since, the ROM has acquired L95 (Nigel), a 20 year old southern resident who was found near Esperanza Inlet, March 30th, 2016.

Which Orca is next? In most cases we have no clue – it is not like we hunt orca just to add them to the collection. And we don’t usually have a production line of specimens in preparation. New specimens are acquired when a body washes up, and we make a snap-decision to cover the cost of specimen recovery and preparation. However, September 15, 2016, T-12A (Nitinat) was found off Cape Beale and towed to Banfield. I was contacted September 16th to see if the Royal BC Museum was interested (obviously that was a YES), and now his massive skull is being prepared. Once degreased, Nitinat’s skull will be added to the Royal BC Museum collection – sometime in 2018 – and made available for scientific research.

As a kid I collected many things – from reptiles and amphibians to model airplanes to Star Wars cards – and now look where I am. I dress in black and white as a Stormtrooper with the 501st legion and collect black and white delphinids – Killer Whales – for the Royal BC Museum. Life sure takes you to unexpected destinations.