The Victoria Eaton Centre was built in 1989.

One of the conditions of construction was the promise to maintain the facades of the various buildings that were demolished to make way for the mall.

An example of this is located on the corner of Fort and Broad Street, where the Victoria Times Newspaper had their printing office. Next to it is the Winch building where I remember Eaton’s had a side entrance to their store.

One of the final holdouts was the McDonald’s Restaurant on Douglas Street. It was eventually relocated one block north on the corner of Douglas and View streets. A section of the closed Woolworths store was carved out to create the restaurant. The rest of the building was remodeled to house the Chapters book store.

As part of the reconstruction, eleven architectural elements were added to the building’s View Street façade.

Why were they placed there?

To find the answer, let’s look at the history of the north west corner of Fort and Douglas Street.

The best places to look for the answer are the Victoria fire insurance maps, the Victoria City directories and some historic photographs. 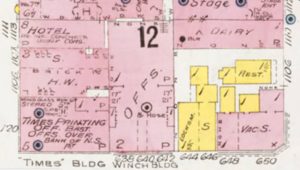 Most of the block is developed, including the Times and Winch buildings on Fort Street.

On Douglas Street, The Royal Dairy is half way down the Block, next to the Victoria Theatre building which extends to View Street. There is a note on the plan that David Spencer Dry Goods operates in the north half of the block around and above the theatre.

The 1912 city directory lists several tenants in the Times building.

The Dairy is in a separate building. The theatre has it’s own separate entrances.

The entrance to Spencer’s store is around the corner at 637 View Street and 1119 Broad Street, both near that corner.

By 1920 it appears that the Theatre has closed and Spencer’s has taken over the theatre’s two Douglas Street entrances.

On Fort Street, the Winch building is occupied by 28 tenants
The Square Deal Hardware company occupies the corner building (650 Fort)
The United Coop is wrapped around it at 646 Fort and 1104 Douglas.
The Shoemaker is now at 648 Fort

By 1929 the Winch building is renamed by its major tenant, The Christy Hall building (640 Fort) and The Square Deal Hardware Company is still in operation.

By 1940 more changes are made to the street addresses, reflecting more closely what they were when the mall was built in 1989.

In 1930, the buildings on the corner are replaced by the Kresge Department Store (1930, archt. G.A. McElroy of Windsor)
The new building  has a unique Douglas Street address for the SS Kresge Company on the ground floor and a separate address for the upstairs tenants. (1100 and 1104)

The main entrance to Spencer’s is now 1150 Douglas, which Eaton’s maintained as their store address and is now the street address for the present mall.

This photograph shows Douglas Street during the mid 1940’s.

This detail shows the business signs from the buildings across the street from the Spencer’s store. You can make out some of the street signs for the businesses mentioned earlier. 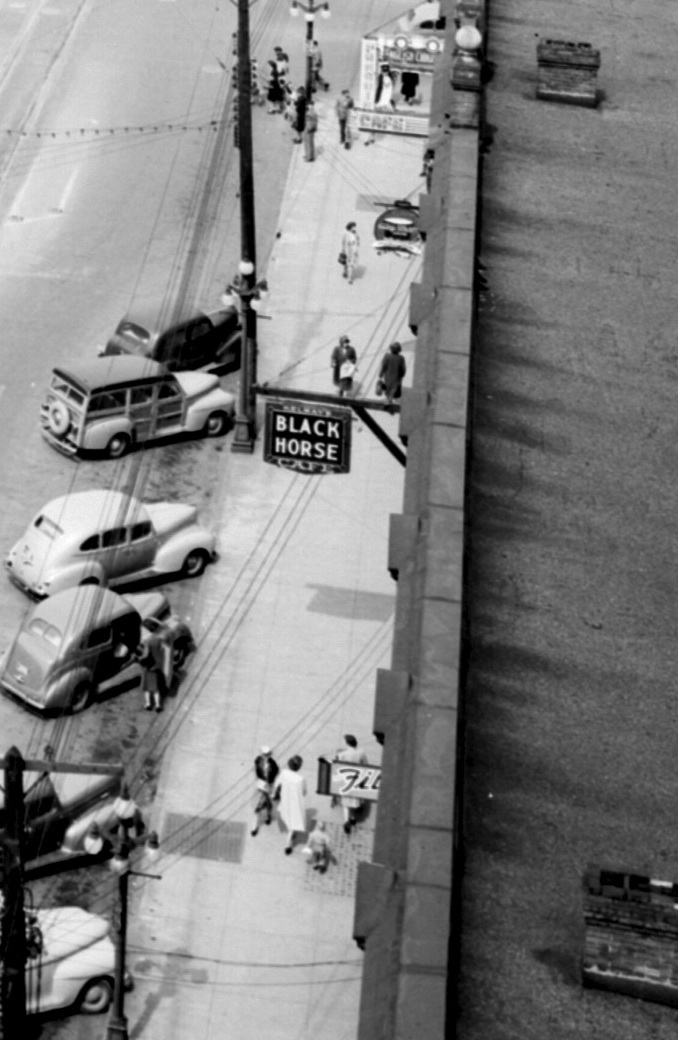 This detail shows the entrance to Spencer’s Store and the Woolworth building in the background. 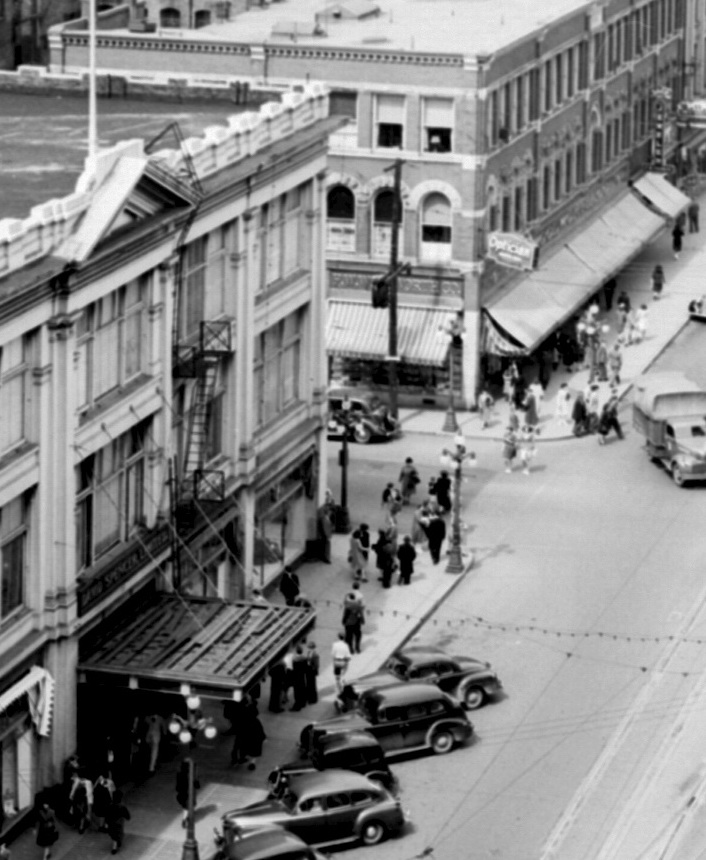 And at the very bottom left of the photograph is this design detail. 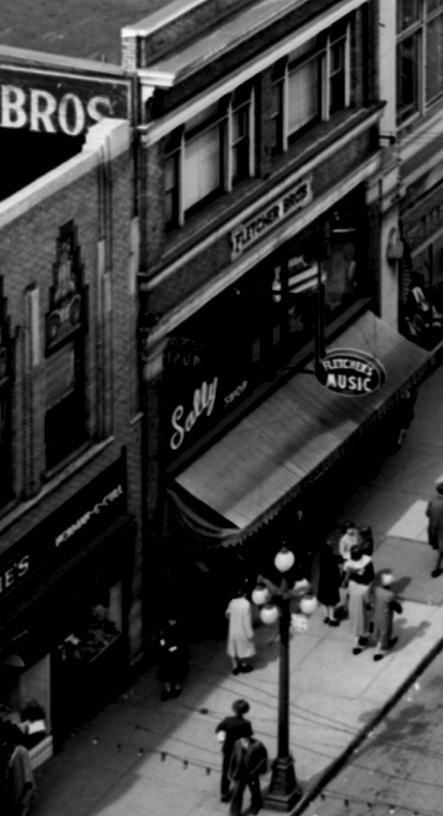 One of the tricks used in early twentieth century building design was to make the front of your building look taller than it really was.

This seems to be the case here.

Notice how the roofline of the Kresge building seems to match up with the old dairy building next door, But the Fletcher music sign is still visible in this photograph.

A similar example can be seen for what is now 1222 Douglas Street. 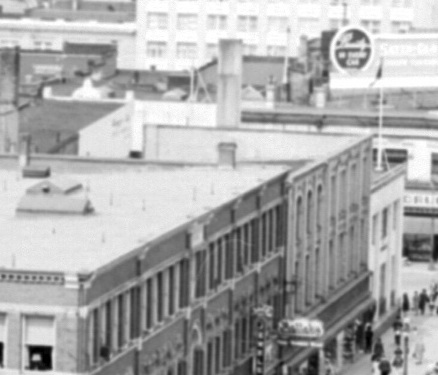 This picture shows the Kresge building more clearly. It very much is attempting to hide the fact that this building is only two stories tall by trying to be nearly as tall as the three story building beside it. 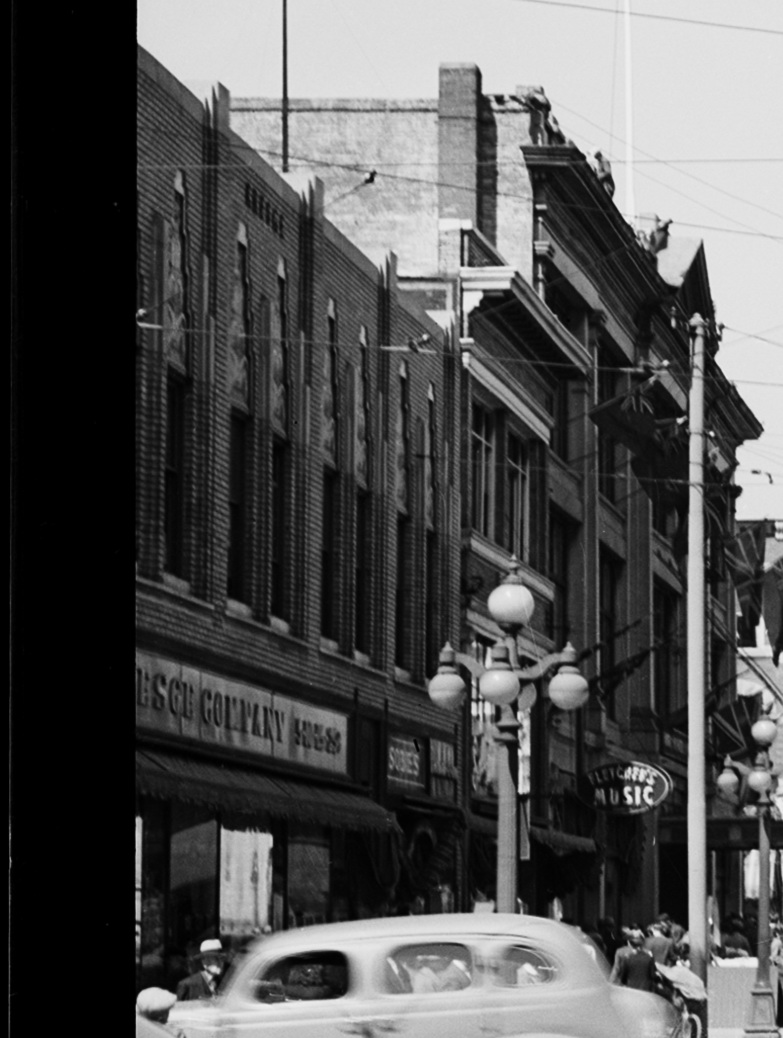 And look! There are those design elements used to rebuild the restaurant mentioned earlier.
All 20 of them.

Over time, The Kresge’s store became a Marks and Spencer’s.

And the McDonald’s? It moved into the former Dairy building that the Fletcher’s Music store and the Sally shop had occupied.

So the design elements on the new restaurant are actually from the building beside it.

As an aside, if you ever visit the mall have a look at the front entrance. Or go out on the food court veranda and explore there. 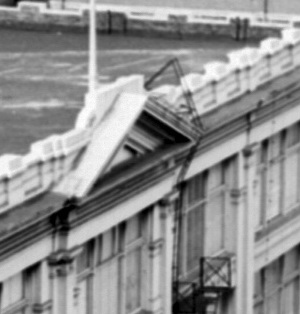 There are several images in the Archives collection that I used in the article, or noticed while researching this article

Looking towards the new restaurant

And across the street

Guess where this is?

To compete with this?