Belted Kingfishers (Megaceryle alcyon) usually take fishes – why else would they be called kingfishers. They sometimes take crustaceans and frogs, and I’d be shocked if they turn their beaks up at big juicy insects. However, mammal predation is quite a dietary shift. Apparently no one explained the meaning of “fisher” to a kingfisher in the southwestern Yukon. 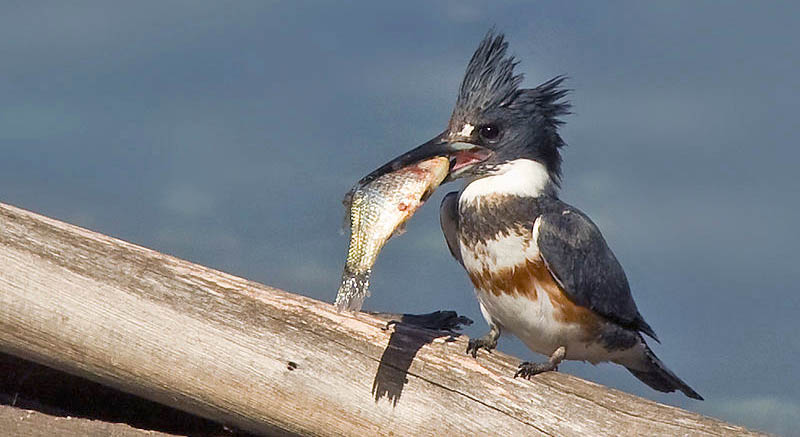 This female obviously read its species description. Looks like she caught a young goldfish. (From: https://en.wikipedia.org/wiki/Belted_kingfisher#/media/File:Belted_Kingfisher_with_prey.jpg)

A paper came out in a recent issue of the Canadian Field-Naturalist (see Jung 2016) detailing the capture of a Western Water Shrew (Sorex navigator) by a Belted Kingfisher. That would make a decent meal and a real energetic boost for the Kingfisher. Jung (2016) mentioned that Belted Kingfishers have been known to take Eastern Water Shrews (Sorex albibarbis), and he (Jung 2013) also reported on a kingfisher trying to subdue a Spotted Bat (Euderma maculatum). 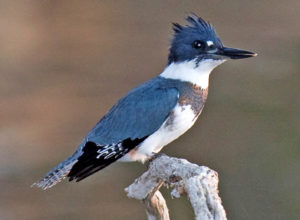 Imagine if kingfishers changed tactics to regularly prey on other small animals? Their ecology could converge on that of butcher birds (shrikes). What’s next? Lizards and snakes?(Yes, shrikes impale their prey on thorns (or barbed wire) to age a bit).

Sure glad kingfishers aren’t the size of a Banshee or Leonopteryx from Avatar, or we’d all be at risk when swimming.

Keep your eyes on the sky. And as for that specific Water Shrew, all you can say is: “Hair today, gone tomorrow.”