On top of Mount Tolmie, all covered with Lizards

Was this an odd title? Actually I think the song went,

“On top of spaghetti…  all covered with cheese,

I lost my poor meat ball…  When somebody sneezed.

It rolled off the table…  and onto the floor.

And then my poor meat ball…  rolled out of the door.

Wow that was a dredged from deep cephalic crevices…

Anyway, I got a tip from Purnima Govindarajulu, my herpetological counterpart in the Ministry of Environment that she’d seen a European Wall Lizard on Mount Tolmie here in southern Saanich. Given how fast and far Wall Lizards are spreading, it was only a matter of time before they colonized this rock. This pocket of lizards will form another expanding sub-population – pretty-much midway between the single lizard I saw at the University of Victoria and the lizards near Doncaster School. 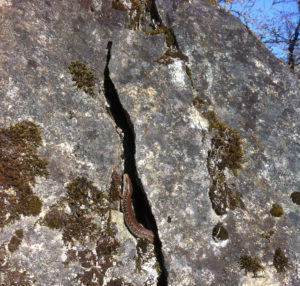 This morning (April 27th) was nice and sunny, and I hiked up to the summit after dropping my daughter at daycare. What did I find first? A Northern Alligator Lizard. That made me very happy – I don’t see those everyday and this lizard was more than patient with the iphone-wielding twit who wanted its picture. 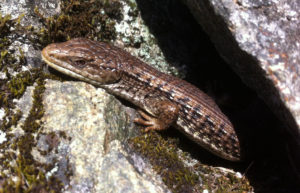 Then less than 2 meters away were the Wall Lizards – five of them. A meter or so along the road, another Wall Lizard. Up along the southeast corner of the reservoir – another large male Wall Lizard.

Yep, looks like they have found a solid toe-hold in this region. Cedar Hill X Road may make a decent barrier to northward dispersal (not that Wall Lizards aren’t north of there anyway) – but they will easily spread southeast and southwest into gardens adjacent to the park. Note the small scales and green colour on this Wall Lizard’s back, compared with the larger coppery scales on the Alligator Lizard (above).

Keep your eyes on rock gardens, rock walls, woody debris, and any bedrock with decent cracks for shelter. The photo below shows just how slender the Wall Lizards are – this one with an intact tail is the largest lizard I have caught to date (21.2 cm total length). After checking the RBCM’s herps database, I see that the only months where I haven’t caught Wall Lizards are January and February – too bad that this spring was consistently cold and wet. I have missed my chance to get a full year’s worth of lizards in 2017.