We are fortunate to have six species of attractive native flowering onions in British Columbia. Nodding onion (Allium cernuum) is widespread. But Hooker’s onion (Allium acuminatum) or taper-tip onion is uncommon BC but widespread on the con­tinent.

Hooker’s onion of the Lily Family (Liliaceae or more recently Amaryllidaceae)   grows as a bulbous perennial. The generally creamy to light brown true bulb has the shape of a slightly flattened globe. It is small, less than the size of a thumb nail on average 1.5 cm (0.6″) across. Wild, bulbs occur in clusters of about the size that would fit easily into the palm of a hand. Each bulb bears two to four channeled leaves which are predominantly grey-green with a reddish base. At first the leaves stand erect, but by the time they reach 15 cm (6″) long they reflex. By onion standards, the leaves seem nearly insignificant reaching a maximum of scarcely half a centimetre across and 30 cm (12″) long or less. Leaves usually dry out and break off by flowering time. 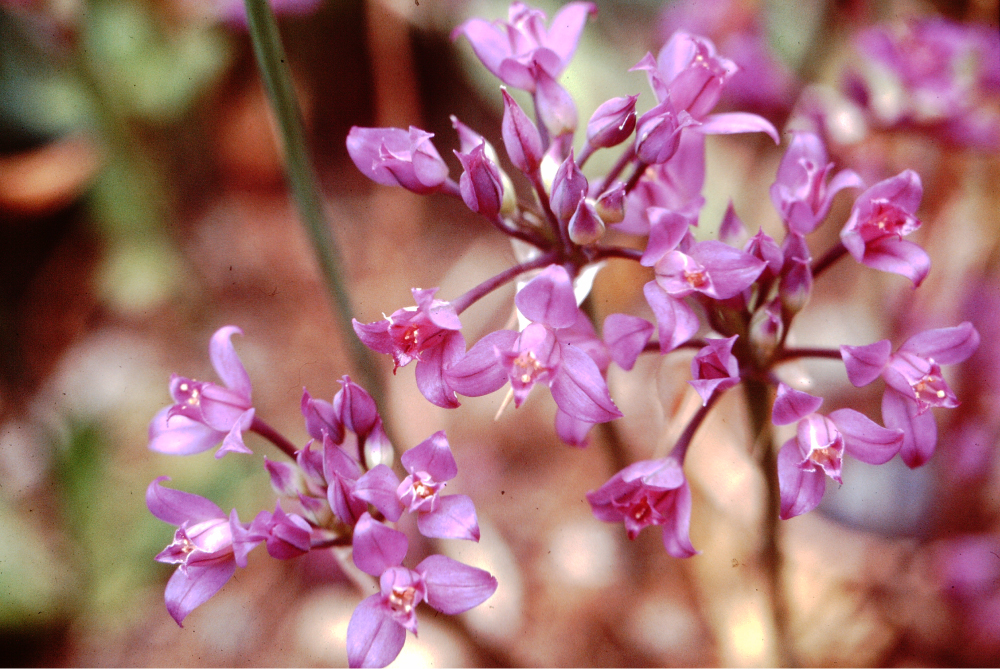 Flowers are borne on a firm rounded stalk which ran­ges from 10-30 cm (4-12″) tall. Two papery bracts sur­round the bud which contains five to 30 flowers. The blooms sit upon more or less equally long stalklets (called pedicels by botanists), so that the head forms a loose umbel reaching about 7.5 cm (3″) across. Each flower consists of six perianth segments, three petal-like sepals and three petals. The lance-shaped petal-like sepals reach about 1 cm (0.4″) long. Their tips notably reflex espe­cially with age. Six short an­thers surround a slightly crested ovary which bears a clearly visible stigma. Mostly the sepals and  petals are pink, but may vary from intense rosy purple to nearly white.

In mild coastal climates the first signs of life appear in early February as leaf tips emerge. In Victoria, this occurs well before the end of winter, and sometimes the snow and frost may freeze back young shoots. During April, leaves continue to get longer and reach their maximum length. By the end of the month the first flower stalks poke out of the ground reaching up to 30 cm (12″) tall in June when flowers open. Capsules split in July to reveal black seeds which are easy to harvest by sharply shaking seed heads into a bag. 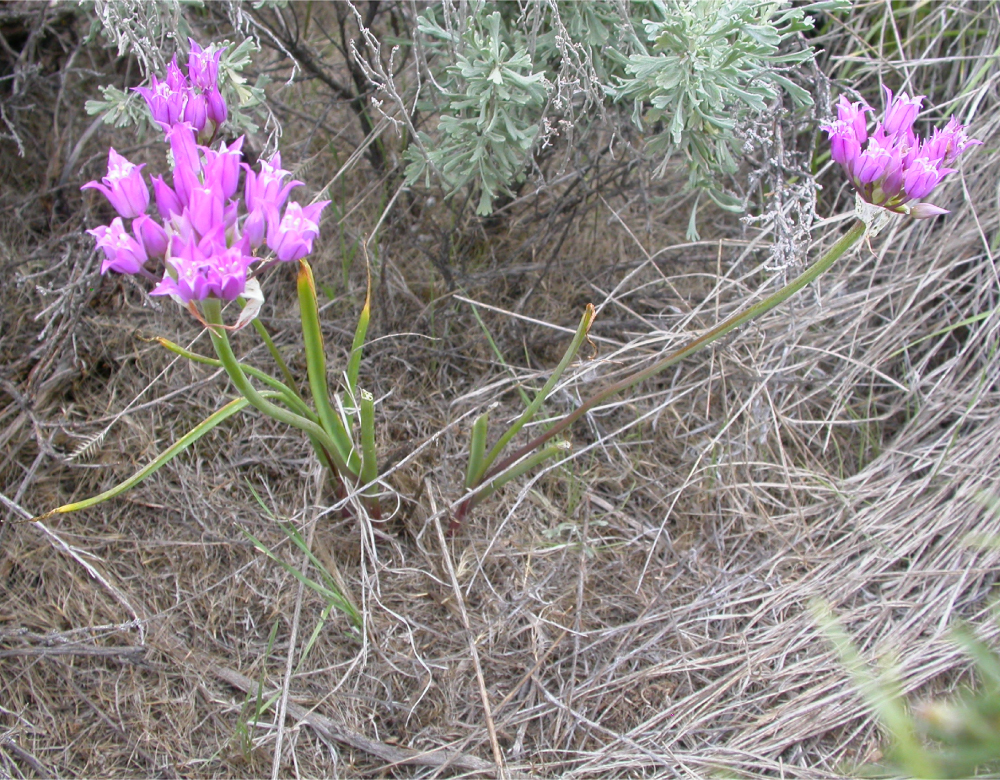 Hooker’s onion ranges from southern British Columbia to northern California and eastward to Colorado and Wyoming then southward to Arizona. In BC its distribution includes dry parts of Vancouver Island and the adjacent mainland extending into the Fraser Canyon. In our region Hooker’s onion clearly favours dry rocky sites, typically growing in pockets of soil on rocky knolls and coastal headlands. Sometimes it survives in only about 5 cm (2″) of mossy crust cover over bedrock, yet it flowers reliably every year. Occasionally this onion thrives under Garry oaks (Quercus garryana), albeit in very shallow stony soil.

These bulbs are little cultivated and rarely available, yet they thrive under appropriate conditions and pro­duce a pleasing display. The site must be in full sun, sharply drained and with a sandy soil. Avoid summer watering. Rock gardens, the front of dry peren­nial beds and pots of gritty soil suit Hooker’s onion well in the milder parts of southern B.C.

Order Hooker’s onions from specialist native plant suppliers or grow them from fall-sown seed. Do not dig this relatively rare plant in the wild.

First Nations of coastal British Columbia savoured various wild onion species including Hooker’s onion. Bulbs were eaten raw or steamed in great pits. In some areas the pits were lined with pine boughs and covered with lichens and alder boughs. Bulbs and shoots have a mild onion flavour and smell.

Hooker’s onion may be hardy to as low as zone 4 in BC, but its natural distribution suggests zone 5 or higher. We have several native onion species in the Native Plant Garden of the Royal B.C. Museum which flower mainly in June