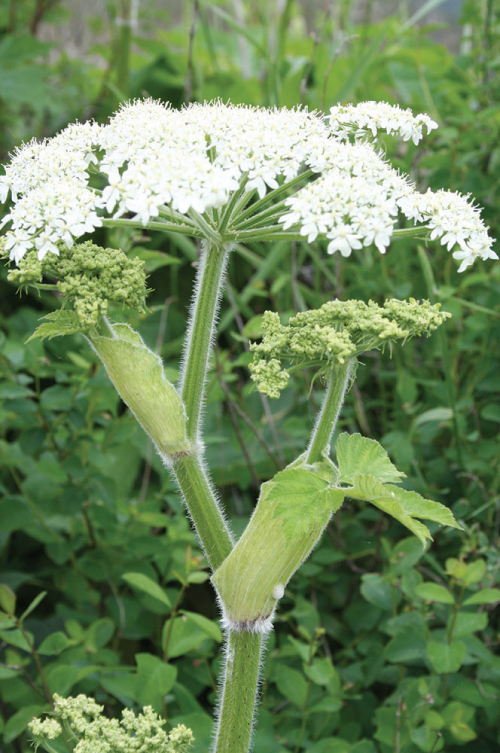 Many of the vegetables we eat came originally from Europe, Asia and Latin America. The aboriginal peoples of British Columbia were un­familiar with these food plants, ne­vertheless they feasted on several in­digenous green vegetables. The most widely eaten among these was the cow-parsnip (now called Heracleum maximum, recently known as Heracelum lanatum), also referred to as Indian rhubarb or wild rhubarb.

Cow-parsnip belongs to the Parsley Family (Umbelliferae or Apiaceae) and grows in the form of a gigantic perennial herb. A thick hollow stem stands 1-3 meters (40-120”) tall and bears large broad leaves. Stems are lightly ridged and woolly. Each leaf is divided into three segments with coarse teeth. Leaves occur at the base of the stalk and along it. Sometimes you will see big swollen structures at the leaf bases. These are flower buds just waiting to emerge.

The stem top is crowned by several handsome, flat-topped flower heads. Each head consists of numer­ous umbrella-like clusters of small white blossoms that vary in di­ameter from 0.5 to 1 cm (0.2-0.4”) across. There are five creamy-white petals in each flower. The blooms circling the outside of each cluster are usually larger and often slightly irregular in form. Five spin­dly stamens bearing greenish anthers sur­round a greenish pistil. Cow-parsnip produces robust flattened seeds which remain on the stalk well into the summer.

Cow-parsnip thrives in rich moist soil along streams and rivers, road­sides and in meadows. You will often find it forming large colonies. It has a wide climatic tolerance, growing from sea level to the alpine zone. The Parsnip River in east central British Columbia is named after this plant. Cow-parsnip may be seen almost any­where in North America in suitable habitats. 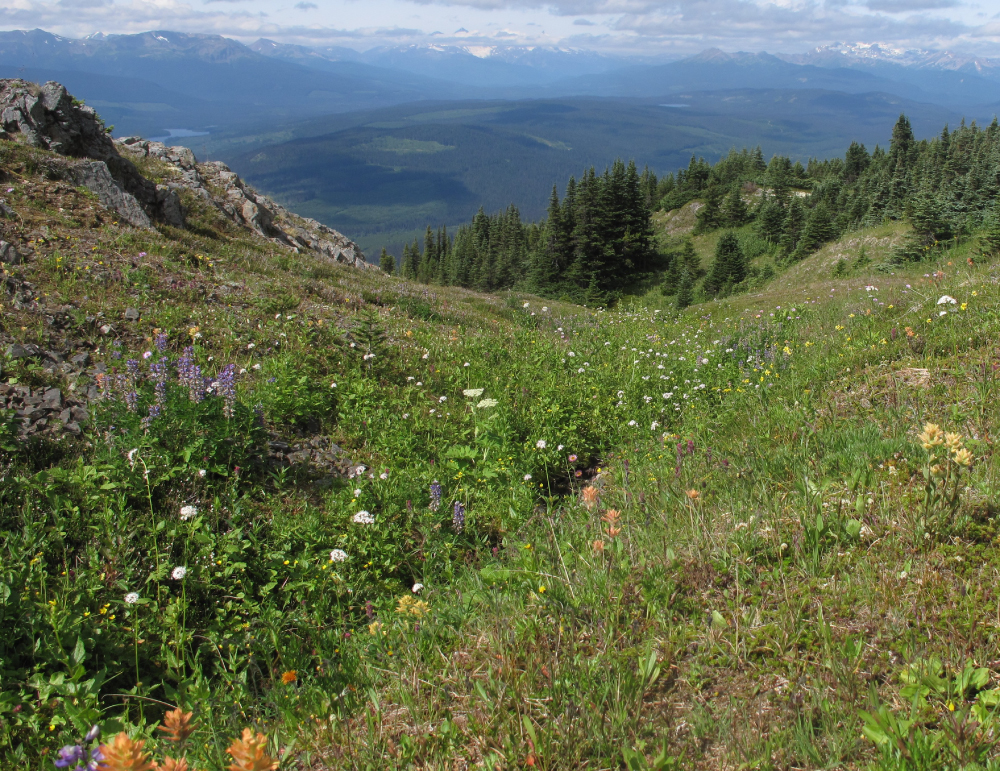 Damp alpine meadow habitat of cow-parsnip on the west side of Hudson Bay Mountain near Smithers, BC. Flower-topped stalks of cow-parsnip are visible in the middle of the image to the right of and above patches of purple lupine blooms. Photo Dr. Richard Hebda.

Almost every First Nations group in Brit­ish Columbia ate cow-parsnip as a green vegetable. Before the flowers appeared in spring, young stalks and leaf stems (petioles) were peeled and eaten raw.  Sometimes they were boiled, steamed or roasted. Bruised cow-parsnip plants emit a strong smell but the stems are sweet and juicy, somewhat like celery. Coastal people ate cow-pars­nip with eulachon fish grease.

According to Saanich Elders Violet Williams and Elsie Claxton, the stalks had to be collected for eating before the flower buds opened. Otherwise they were tough to chew and tasted too strong.

Be aware that members of the parsley family, especially water hem­lock (Cicuta douglasii) and poison hemlock (Conium maculatum) con­tain terribly strong poisons which can kill a human. You must be certain that the plant you intend to eat is a cow-parsnip. 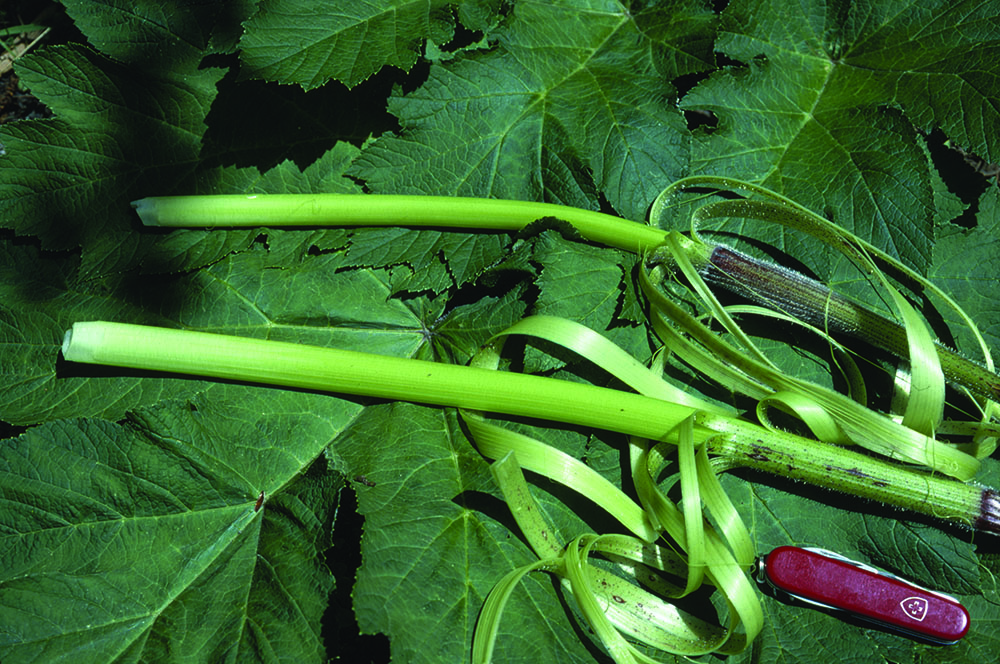 Cow-parsnip plants can make a bold addi­tion to your garden but you must give them room. They are best raised from seed, collected as soon as it is ma­ture, and planted in a rich moist soil. You may be able to carefully transplant very young seedlings too, but I su­spect that this technique is not often successful.

Cow-parsnip has one characteristic you should be wary of. Like its gigan­tic relative, giant cow-parsnip or hogweed (Heracleum mantegazzianum), cow-parsnip contains chemicals that may cause sev­ere skin inflammation known as dermatitis. The sap of the plant has particularly strong activity. Ul­traviolet rays from the sun activate the compound and may cause the skin to redden and even produce per­manent discoloration. Not all people are so affected but be warned to han­dle the plant carefully especially on a hot sunny day.

The plant supposedly obtained its name after the Greek god Heracles (Hercules). The previously-used species name “la­natum” refers to the “woolly” leaves and parts of the stem.

As you see great stretches of cow- parsnip along our province’s high­ways, think of it not as a roadside weed but as a valuable food of British Columbia’s First Nations. Cow-parsnip is hardy to zones 2-3 in Canada. 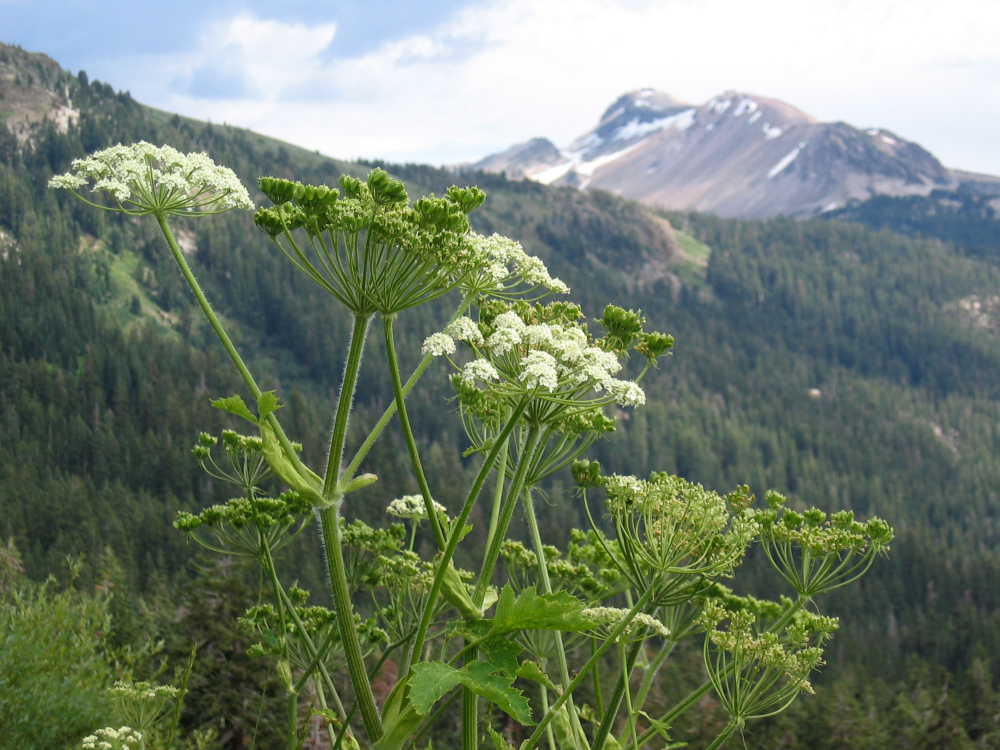