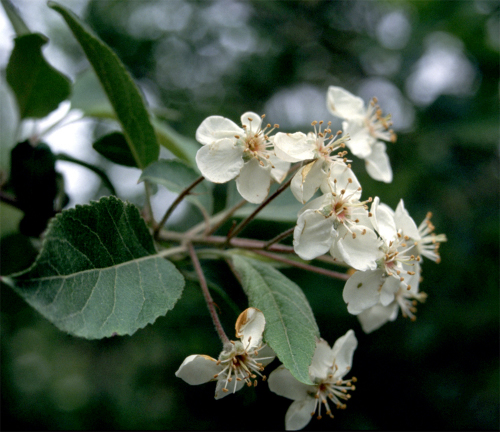 Have you sometimes wondered what the wild ancestors of our highly-bred food plants may have looked like? The wild apples that spring up in hedgerows on Vancouver Island are often as large as our cultivated forms. Our cultivated crab apples, though they may seem closer to the wild than regular apples, are still the result of breeding. British Columbia’s native Pacific crab apple (Malus fusca or Pyrus fusca), however, may look very much as the ancestors of cultivated apples did many thousands of years ago. Bearing scented blooms, edible fruit and growing to a small stature, it has much potential as a garden and landscape plant.

Pacific crab apple, also known as Oregon crab apple, forms shrubs to small trees from 2 to 12 m (6½ to 40 ft.) tall. Plants branch widely and often form extensive thickets.  Distinctive, spine-like, short shoots line the branches but are not nearly as vicious as those of black hawthorn (Crataegus douglasii) or English or common hawthorn (Crataegus monogyna). The grey bark becomes scaly or deeply fissured with age. Oval and pointed leaves look as if they are a cross between those of the domesticated pear and apple. These weakly-toothed leaves sometimes may be lobed near the base.

Delightful blooms have an apple-blossom scent and appear in flat-topped clusters in the spring. Most flowers are white or creamy, but sometimes they take on a warm pink blush and can be very showy. Each flower is about 2 cm (slightly less than an inch) across. The five petals extend well beyond the cluster of stamens in the centre. As in apples and pears, the ovary is inferior, meaning that it is located below, not on the inside of the petals and sepals. In late summer, bunches of oval to cylinder-shaped fruits dangle from long red stalks. Each fruit is about the size of the end of your little finger. An open-grown tree can be “dripping” in fruit similar to some cultivated crab apples. At first the fruits are green and shiny but within a few weeks they turn yellow, pinkish and sometimes even purplish-red. Ripe fruit clusters, especially those well exposed to sunlight, are very attractive. The fruit tastes pleasantly tart when coloured up. After frost it turns brown and mushy but sweet. 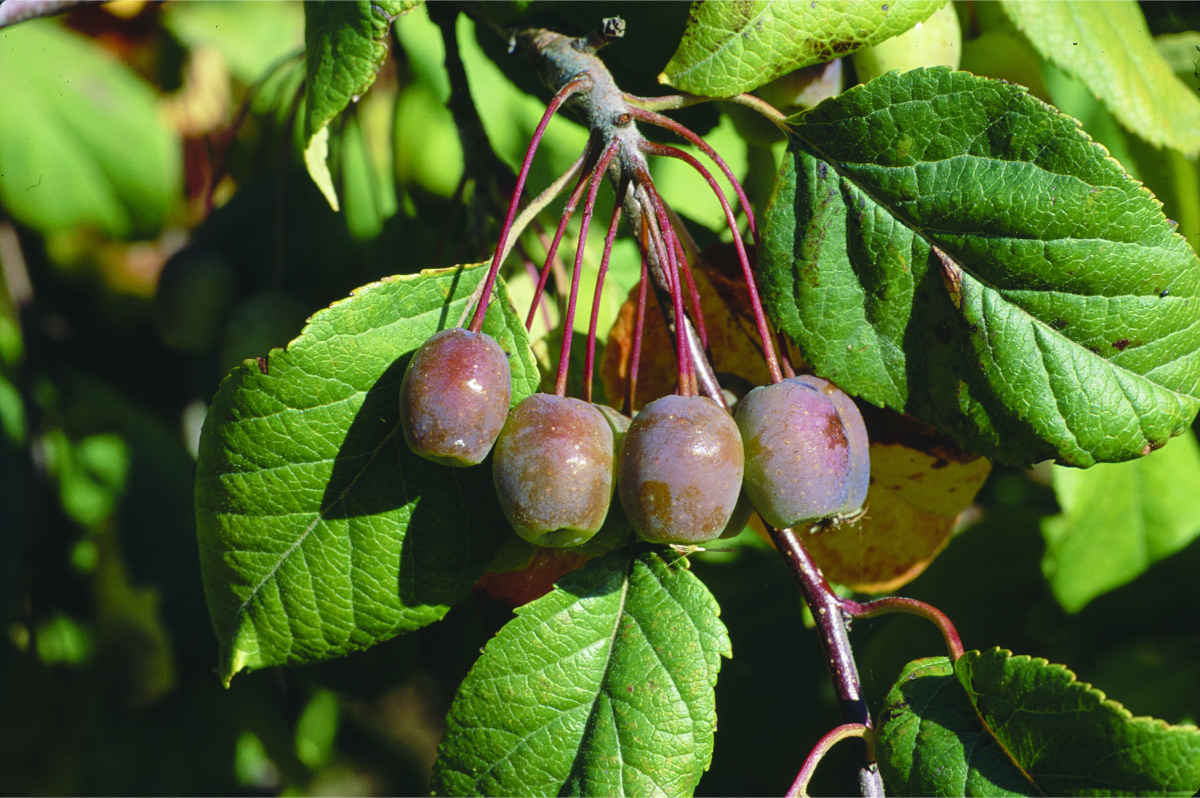 Pacific crab apple occurs along the British Columbia coast well up many of the main river systems from Alaska to Vancouver Island and on the adjacent mainland to elevations as high as 800 m (2600 ft.). The full geographic range extends all the way from the Aleutian Islands to northern California. The natural habitat tends to the moist side and includes damp woods, stream sides and coastal bogs. These amazing bog trees resemble large gnarled and twisted “creatures” that seem to hail from some distant prehistoric times. They also occur frequently just inland of the ocean shoreline, especially behind beaches and at the edges of estuaries, which suggests that they tolerate salt spray. On some outer coast islets, exposed to the full influence of the sea, our native crab apples may be the only broad-leaved tree among a mass of Sitka spruce (Picea sitchensis) and other conifers.

The hard wood of the Pacific crab apple was widely used along the coast. From it, First Nations people fashioned tool handles, bows, sledgehammers and smaller items, such as spoons and fish hooks. The Nisga’a of northwest B.C. pegged their house boards in place with crab apple wood. The fruit was harvested in early fall and eaten fresh or stored in boxes under water. Apparently, this stored fruit sweetened and softened over time. Medicines, often in combination with other plants, were made from the bark. These medicines were used for a range of internal and external ailments such as stomach problems and skin complaints. The bark and other parts of the tree release hydrogen cyanide, so use only with caution. The flesh of the fruits apparently does not produce much cyanide.

In the garden, Pacific crab apple features best as a specimen tree in an open area. Slow growing, the crown eventually spreads farther than the tree reaches in height. Leaves turn gold and then even red in the fall and combine very attractively with the colours of the ripening fruit. The fruit makes excellent jelly and can be added to other jellies as a natural source of pectin. Wild birds enjoy the ripe fruit, too. Closely planted trees can from a fine dense hedge, and might be good candidates for hedges near the seashore. Plants are best raised from seed sown in the fall in pots and left outside. Seedlings normally take two years to become large enough to plant out.

Up to now the native plant literature has not given much attention to Pacific crab apple, but it has considerable possibilities. The attractive form, flowers and potential for heavy wild fruit production all point to a valuable native species for the garden landscape.  Pacific crab apple is hardy to zones 5-6 in Canada.