Heathers (Calluna species) and heaths (Erica species) are popular ground cover plants worldwide. True heathers and heaths are not native to British Columbia, but many heather relatives and heather-like plants thrive in our province, some under harsh inland climates. Crowberry (Empetrum nigrum) (also known as curlew-berry and crake berry) is an excellent, extremely hardy, heather substitute that fulfils the role of ground cover and produces abundant attractive black berries.

Crowberry plants consist of scrambling woody stems rising to 20 cm (8″) tall, and enveloped in wooly hairs and short evergreen leaves. Small roots anchor the stems into the soil. Often a mass of better developed roots associated with a loose crown in the middle of a patch provide a firm grip. Numerous needle-like leaves are arranged in alternate fashion or grouped in fours. These grooved leaves extend 4-8 mm (0.15-0.3”) long and have their margins rolled under.

Tiny purplish flowers appear early in spring, scattered along the stem at the base of the leaves. There are male and female flowers, which sometimes occur on separate plants. Each flower has either one tiny ovary, or three purple stamens, sometimes with up to three purplish petals, all cupped in tiny sepals and bracts.

Unlike the inconspicuous blooms, the shiny black bead-like fruits are easily visible and very attractive. These globe-shaped berries are fleshy and juicy, about half a centimeter (1/5 “) across. On loose leafy plants the berries often occur singly, spaced along the stems. On low growing plants they cluster in bunches and appear to nearly smother the plant. The berries contain large white seeds and are a favourite food of bears. 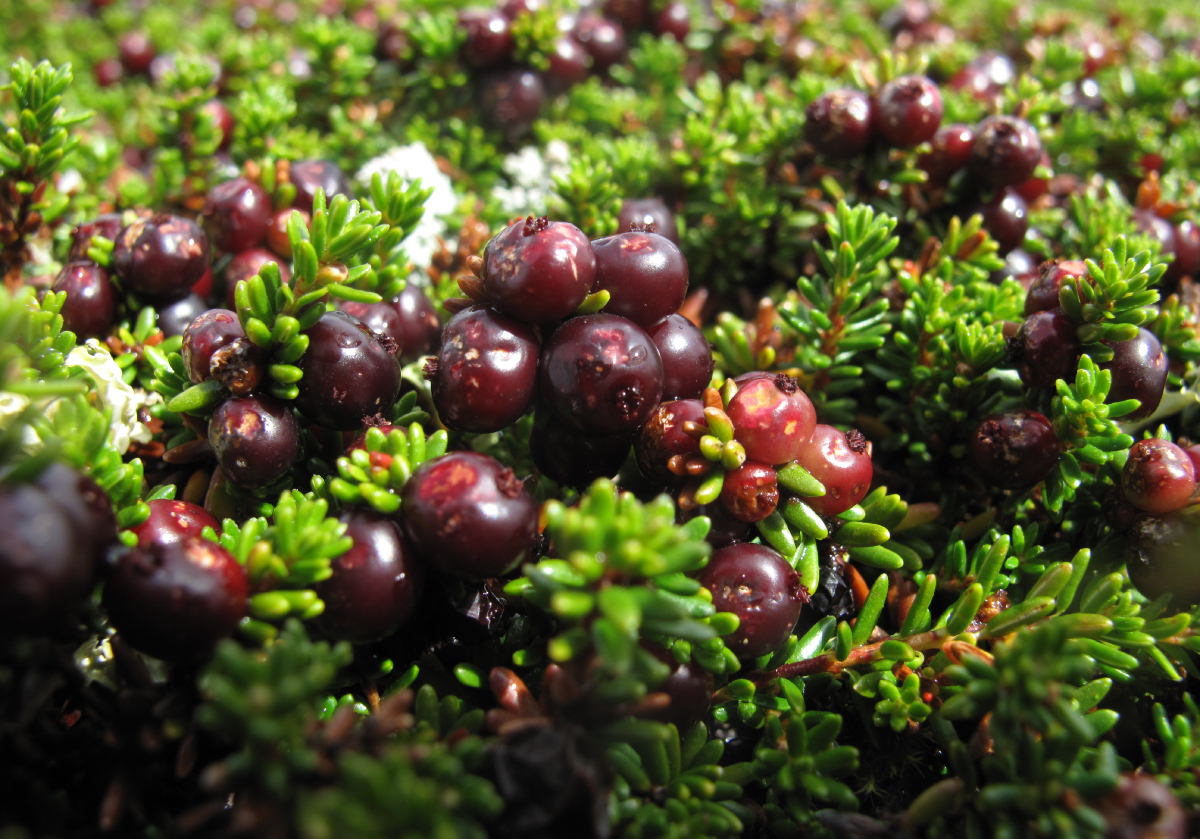 Ripe crowberry fruits growing on a dense mat of stems and leaves in the high mountains of northern British Columbia. Photo by Richard Hebda.

Crowberries are widespread plants with a most hardy constitution. You can find them almost anywhere in our province in suitable habitats except in the dry lowland climates of the southern interior. Plants have been observed to nearly 2500m (about 7750 feet) above sea-level in BC. Crowberry’s geographical range extends across all of Canada, southward on the west coast to California and around the northern hemisphere. It is largely a plant of full sun environments. At low elevations, especially on the coast, it inhabits bogs and openings in bog forests. Inland you may encounter it in conifer forest openings and almost everywhere in the alpine tundra and subalpine turf as well as on dry rocky mountain knolls. Crowberry favours acid to very acid soils usually with abundant organic debris.

This creeping shrub has great potential as a ground cover species in most BC gardens. It is especially suited to interior gardens in regions with cold harsh climates. On the coast it is better suited to open moist rock gardens or bog gardens where it will grow into a loose luxuriant mass of heather-like stems. Plants are most easily grown from root-bearing stem pieces planted in moist sandy peat soil until well rooted. Nursery material has also been grown from cuttings and fresh seeds sown in the fall. Crowberry is hardy to zone 1 in Canada. 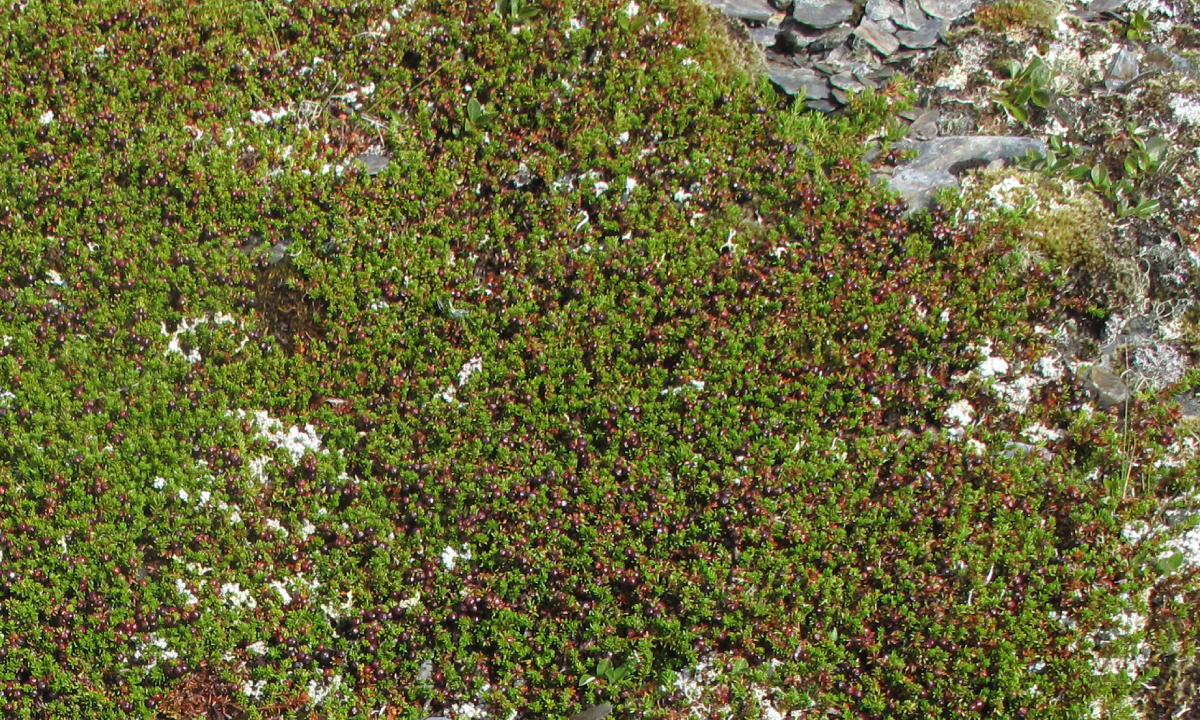 Crowberries were eaten widely throughout British Columbia. Anyone who has munched a crowberry on a wilderness hike knows they tend to be somewhat watery and slightly tart, but pleasant nevertheless. On the coast crowberries were mainly eaten fresh by Haida and Tsimshian peoples in whose lands they can occur in great abundance. Haida Elders thought that eating too many of them might lead to internal bleeding. In the northern interior many First Nations people ate the berries because they are available all winter long under the snow. Some Carrier people mixed the berries with bear grease. Berries were also prepared by mashing them and cooking with heated stones in spruce bark troughs. Dried mash was soaked in water and consumed later. Mixed with sugar the berries can be used for pies and jellies.

Crowberries are an excellent heather-like ground cover for coastal and especially cool interior gardens, despite the absence of showy flowers. And unlike true heathers you can nibble tart fruit in fall and even in winter. So, enjoy this widespread native in the wild and maybe find a spot for it in your garden.