British Columbia forests are re­nowned for the trees they grow. Wi­thin these great forests there are other botanical treasures that live on the forest floor. Among these the bunchberries (Cornus  spp.) are among the most wi­despread.

Bunchberries belong to the Dog­wood Family (Cornaceae) along with our provincial floral emblem the western flowering or Paci­fic dogwood (Cornus nuttallii) and red-osier dogwood (Cornus stolonifera). Bunchberries grow as low, carpeting herb-like shrubs. A root-stem system (rhizome) spreads just below the ground surface and from it arise 5-20 cm (2-8″) tall flexible stems. Each erect stem bears a pair of small highly reduced leaves about halfway up, and a whorl of 2-8 cm (0.8-3.2”) long oval leaves at the top. The leaves are usually dark green and somewhat glossy but may yellow in full sun. The veins appear to be well pressed-into the leaf sur­face. Tear through the leaf and you will see several thin whitish strands along the torn edges, a characteristic of dogwood leaves.

A flower head develops in late spring to early summer at the top of the stem. Four to six modified leaves cal­led bracts surround the cluster of tiny flowers in the centre. Most people think that these white bracts are the petals but they are not. True flowers huddle cheek-to-jowl in a central clump. Each mini-bloom consists of a tiny toothed tube of greenish sepals which in turn surrounds a tiny funnel of four pur­plish petals. The pistil hides within the throat of the flower. Four spindly stamens poke out from the mouth. The berry-like fruits mature in late summer and early fall into a bright red bunch (hence the common name). Alaskan bunchberry differs from the common and widespread bunchberry (Cornus canadensis) which has greenish white petals and no well-developed leaves on the stem. 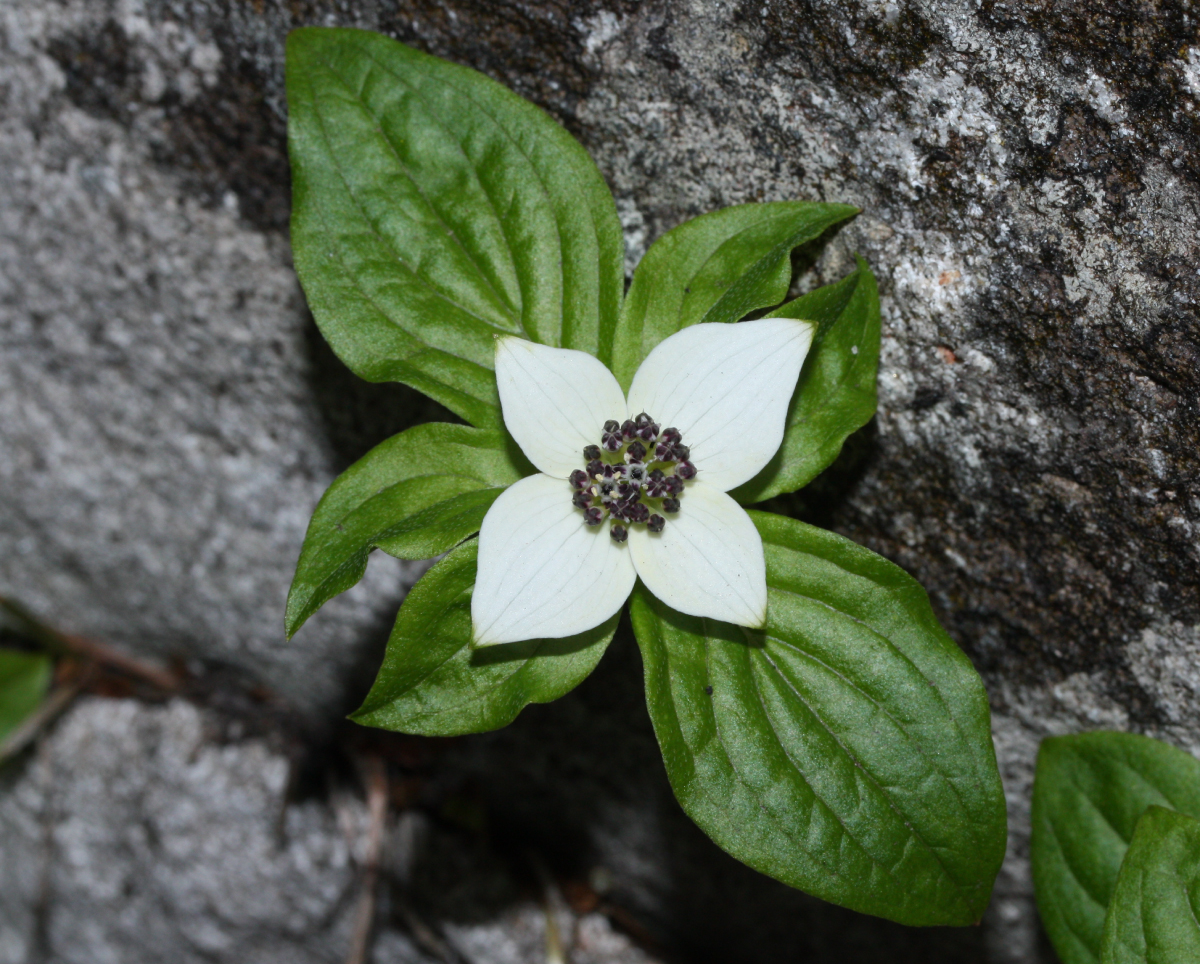 Alaskan bunchberry haunts mo­ist old-growth forests and thickets of British Columbia’s coastal strip. It thrives on acid soils rich in humus, draping over rotting logs and crowd­ing under shrubs at the edges of bogs and in the sub-alpine zone. The geographic range of the species extends both north and south along the coast into Alaska and the northwestern Un­ited States. Common bunchberry re­places Alaskan bunchberry east of the Coast Mountains.

Alaskan bunchberries were much savoured by First Nations people of the coast. The berries were eaten raw, with eulachon fish grease and with sugar. Haida occasionally steamed the fruit, mixed it with water and grease and stored it for the win­ter. Although the berries have a pu­lpy texture and a large seed, their taste is pleasantly sweet.

Bunchberries make excellent gar­den subjects especially in moist sha­ded settings under trees and on the north side of buildings. They com­bine well with shrubby members of the heather family (Ericaceae) such as rhododendrons or azaleas. They need moist, airy and humus-enriched soil to thrive and do not enjoy warm sunny set­tings. We have grown bunchberries with tall ferns under a tree in the Native Plant Garden of the Royal British Co­lumbia Museum but they never seemed to flower the way they do in the wild. 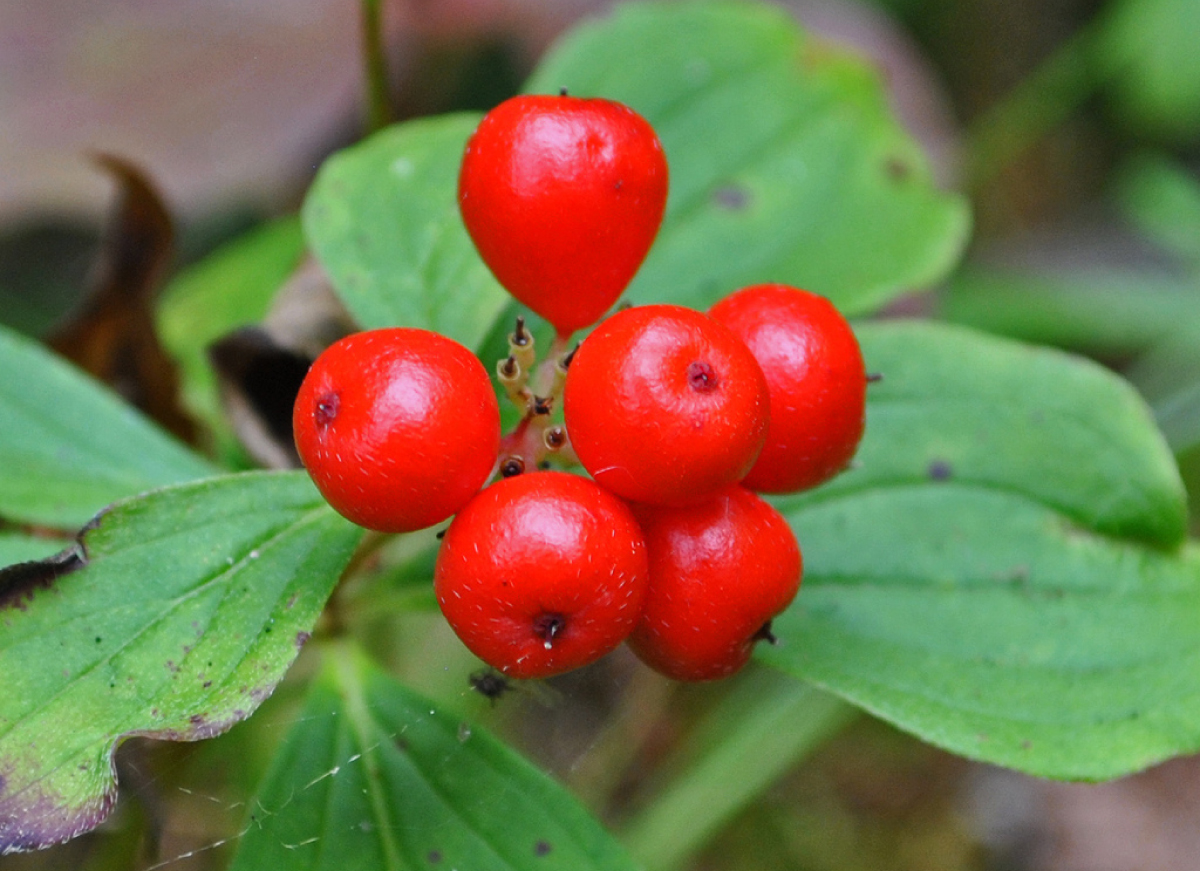 Raise Alaskan bunchberries from seed or buy them from a garden centre or nursery where they are occasionally availa­ble. Sow the seed in the fall in a pot of peaty soil and leave over the winter. Plants with a vigorous root system raised in a pot succeed best.

The name “Cornus”, an ancient name for dogwoods, may be derived from “cornu” an old name for horn, because of the very hard wood of some of the tree dogwood species. The species name “unalaschkensis” recalls that the plant was named after Unalaska Island in the Aleutian Islands.