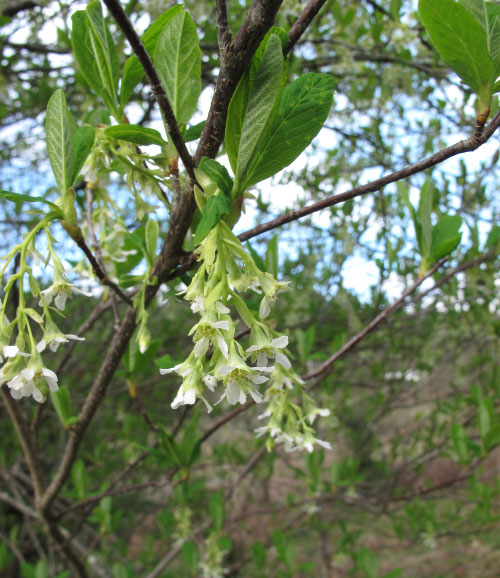 Spring arrives early in south­western British Columbia, and many plants waste no time producing flowers. June or Indian Plum, known botanically as Oemleria cerasiformis or not long ago as Osmaron­ia cerasiformis, is one of the  earliest of all shrubs to bloom.

June Plum (also called Oso berry) is a deciduous shrub in the Rose Family (Rosaceae), which grows from 2-5 m (6.5-16.5’) tall. Stems and old branches are grey, but young branches appear dark wine red. The branches form a graceful up­swept pattern. Thin, bright green leaves unfold as early as February. Tapered and oblong, they are usually widest above the mid-point. The leaf margin is smooth-edged and the lower surface paler than the upper. Leaves alternate along the branch, often standing erect when young. Crushed leaves smell like cucumber or watermelon rind.

Clusters of flowers dangle from the branch tips as the first leaves appear. A fully open flower cluster may reach 10 cm (4″) long and have six to 12 blooms. Each greenish-white  blossom is about 1-1.5 cm (1/4-1/2″) across. Some people describe the flowers as almond-scented, whereas others call them bad smelling! In any case, once you have smelled them, their scent will be forever recognizable.

Five small greenish sepals and five greenish-white rounded petals arise from the edges of a cup-shaped structure, called a hypan­thium. The hypanthium is formed from the swollen end of the stalklet bearing the flower. Stamens or pis­tils reside in the cup of the flower with male and female flowers on separate plants. In the male flower, 15 stamens form three rows at the edge and just inside the cup. Five pistils crowd together in the bottom of the female flower cup.

Male plants, perhaps surprisingly, produce the most abundant and showiest flowers. Having male and female flowers on separ­ate bushes reduces the chances of in-breeding. But a great mystery surrounds the question of pollination. At flowering time there are few if any, bees out. Possibly na­tive beetles do the honour, but even after many hours of observation, the responsible party has yet to been seen for sure.

Small fruits appear in spring. At first these are a pleasant peach colour but soon darken to dark blue or nearly black. Like their distant relatives, the true plums, the fruits are covered in a greyish bloom. A prominent groove marks one side of the fruit. Birds especi­ally Cedar Waxwings gobble up ripe fruit and disperse the seed. 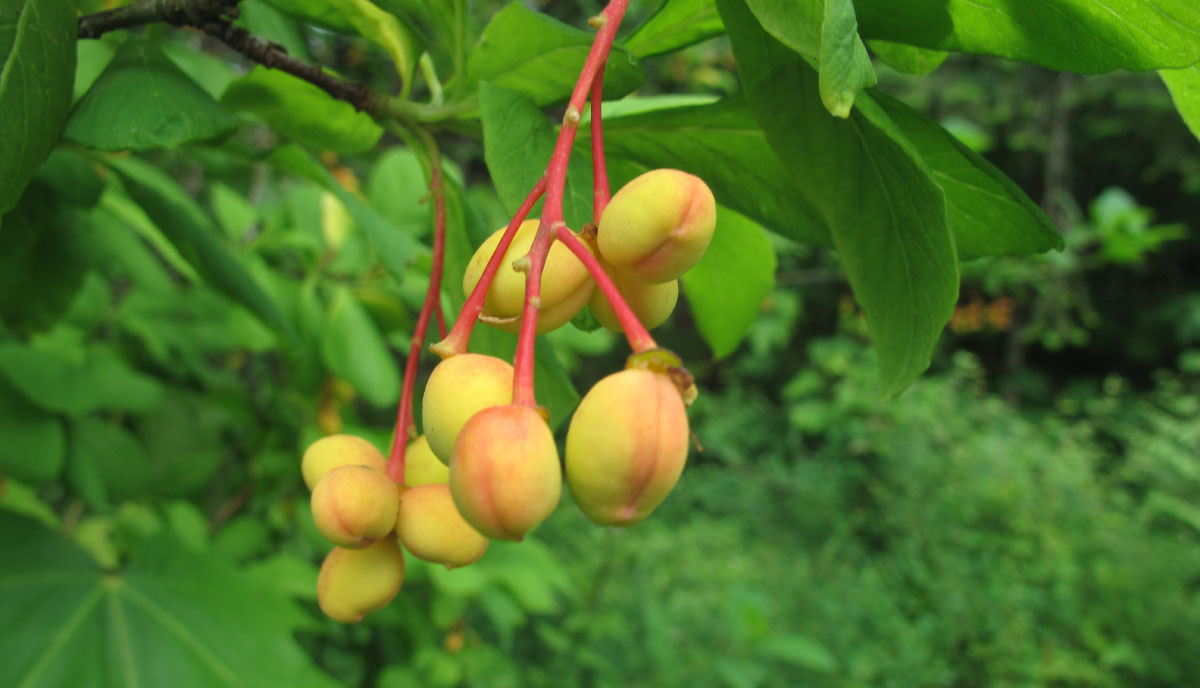 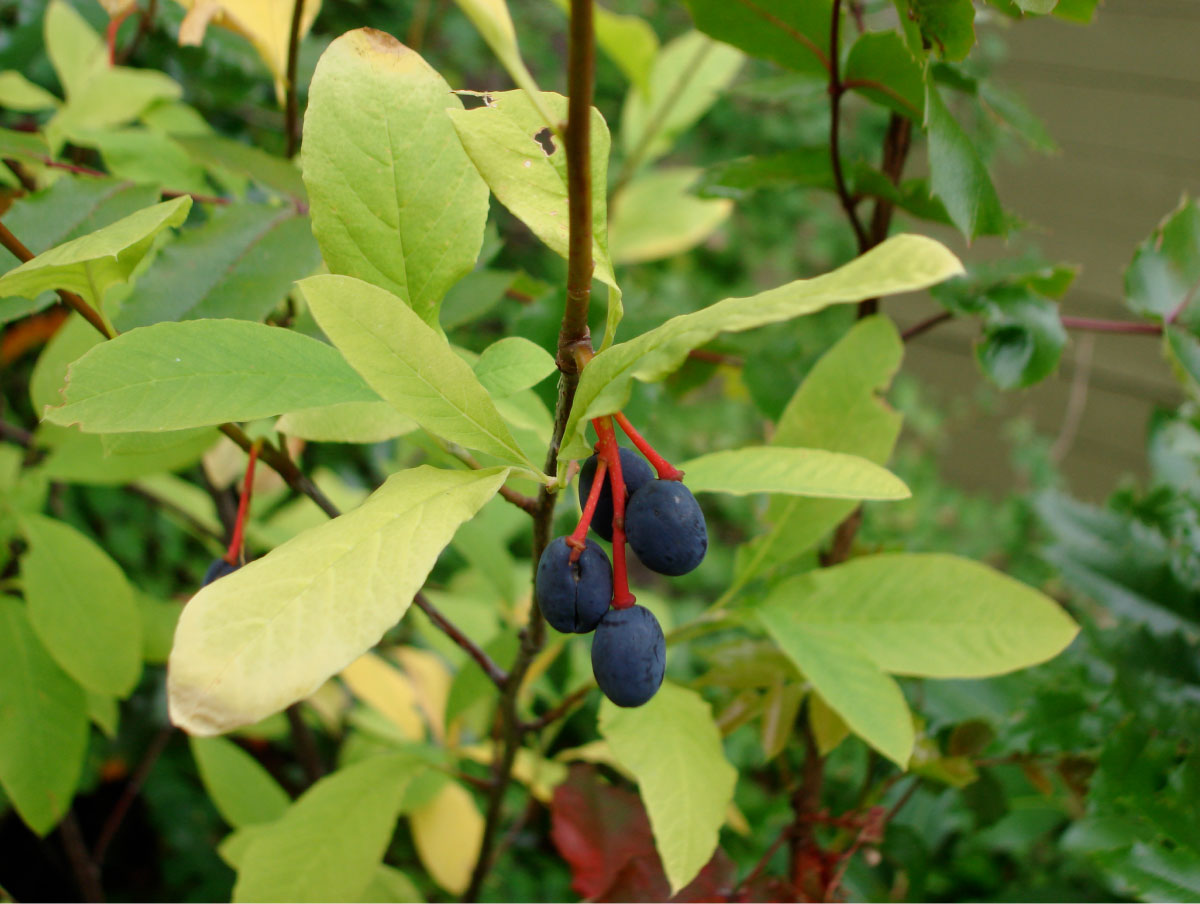 The distribution of June plum, hugs the southwest coast of British Columbia, on south Vancouver Island north to about Campbell River,  and on the mainland as far as Yale and Squamish. Moist thickets, open woods and stream banks are its favourite haunts. June plums occur along the Pacific Coast, west of the Cascade Mountains as far south as northern California.

Where the climate permits, June plum makes a fine early spring shrub for the wild or woodland gar­den. It thrives in the Native Plant Garden of the Royal British Colum­bia Museum where it requires little maintenance. The coloured fruits also draw much attention in early summer.

For flower and fruit display you will need one male and one female plant. This shrub is raised from suckers, twig cuttings or seeds. Seeds need a long, cold moist spell followed by a warm interval to germinate, so best plant them in the summer when fruit ripens and leave until the following spring. You may often find seedlings in fence lines and shrubs where birds perch and pass seed.

Generally, the fruit has a bitter choking taste, though I find fully ripe fruit tasty.  Ne­vertheless, First Nations people around the southern Strait of Georgia and Puget Sound ate small quantities of fresh or dried “plums”. The fruit is not poisonous, although at the Royal BC Museum we get  calls from concerned parents whose children have tried it. First Nations of the Saanich Pe­ninsula still boil Indian plum bark (sticks) in water and drink the li­quid for diarrhea. Bark is also used in a complex mixture to treat several serious ailments.

Oemlaria got its name from an obscure individual called “Oemler”. The species name cera­siformis refers to the cherry-shaped appearance of the fruits.

See June plum in the Native Plant Garden at the Royal BC Museum at any time of the year. It is at its best in the warming days of late February and March when the first flowers open to greet the sun.