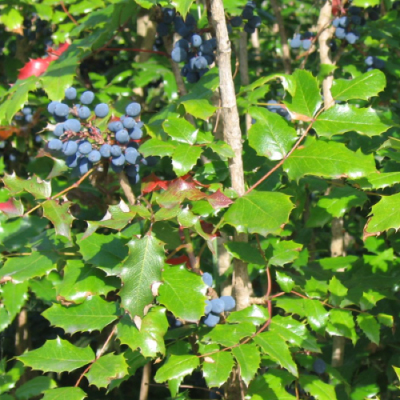 British Columbia is home to a diverse collection of gorgeous native shrubs. Many of them produce edible wild fruit too. Few are as versatile and adaptable to the home garden as the Oregon-grapes (Mahonia spp.) and of these Tall Oregon-grape (Mahonia aquifolium) has the highest profile.

Tall Oregon-grape forms handsome shrubby clumps of few to many upright greyish canes. Wild clumps normally grow half to one and a half metres (20-60″) tall, but straggly individuals can reach 2.5 m (100″). The inside of the stems and roots is coloured brightly yellow. Shiny, com­pound evergreen leaves, with 5-9 leaflets crowd toward the ends of stems. Spiny teeth line leaflet edges giving rise to the species name “aquifolium” which is a classical name for holly (Ilex  spp). Hollyleaved barberry is another name for the plant and as is the case with the holly the leaves can be painful. In the summer, leaves shine lustrous green, but in the winter they turn an attractive bronze or even red. Delicate new spring growth emerges reddish too.

On the coast many-flowered clusters of brilliant yel­low blossoms appear as early as late February and persist into April. Often several clusters throng the end of a stem creating a colourful display. In the blooms of this plant, the petals and sepals are both coloured so that each delicately scented flower has three whorls of three petal-like segments. Glands at the base of the seg­ments produce clear drops of nectar. Inside a ring of seven yellowish stamens, each with peculiar projecting “ears”, squats a greenish pistil. Grape-like bunches of small blue berries replace the flowers in late spring and sum­mer. The stunning display of abundant fruits is so appealing that you might be tempted to stuff them into your mouth. Avoid that temptation because the berries are mouth-pucker sour and contain large seeds. 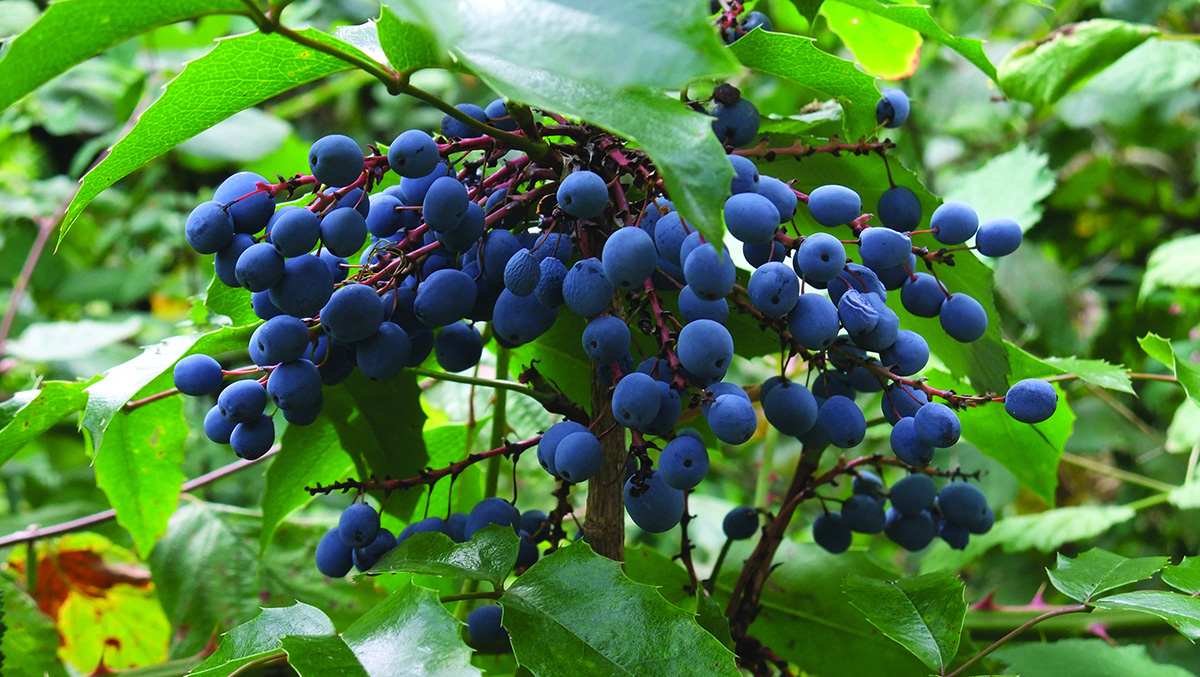 In British Columbia this shrub occurs from Prince George southward in the inte­rior and to the north end of Vancouver Island on the coast. The range extends southward into Oregon and eastward to Idaho. The natural habitat includes open wood­land, edges of meadows and, in the in­terior, sagebrush covered hills.

Tall Oregon-grape was introduced to European gardens in the early 1800s. Generally it is a co-operative horticultural shrub especially for partly-shaded to open well-drained sites. Once planted it may need oc­casional pruning immediately after flowering to keep a neat form. Cold, drying winter winds kill exposed foliage. Try tall Oregon-grape in a shrub border, hedge, or naturalized thickets along with Nootka rose (Rosa nutkana) and snowberries (Sym­phoricarpos spp.). Landscapers use it widely around institutional buildings on south Vancouver Island. A dense hedge of it may keep out nosy intruders.

Tall Oregon-grape plants are easi­ly obtained from garden centres and nurseries on the west coast. They can be grown from seed too. Sow ripe seed in the fall and transplant young seed­lings the following fall into nursery beds. At the Native Plant Garden of the Royal British Columbia Museum tall Oregon-grape spreads widely by seed into adjacent herbaceous beds. Thickets spread outward underground so prepare to keep them in check.

First Peoples knew tall Oregon-grape well. They ate the fresh berries and, on south Vancouver Island, used them as an antidote to shellfish poisoning. Nlaka’pamux (previously Thompson) People of the Fraser River Canyon boiled the outer bark of the roots to make a bright yellow dye for baskets. Liquid from the bark of boiled woody stems helped treat red itchy eyes.

The blue berries make an excellent wild jelly. Use lots of sugar to moderate the tartness, and screen out the large and bitter seeds.

Our Oregon-grapes have been known botanically by two names: Mahonia and Berberis. Mahonia, honours an 18-19th century American horticul­turalist Bernard M’Mahon. The name Berberis (barberry in English) originates in a similar Arabic name for barberry fruit.

Tall Oregon-grape is a wonderful coastal landscape shrub. It is attractive all year round and produces edible ber­ries. Look for it and its berries in the wild and come and see masses of it at the Native Plant Garden of the Museum in Victoria.