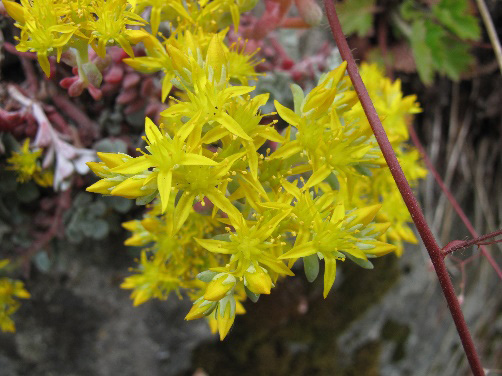 British Columbia is full of rocks, and rocks are not hospitable places to make a living. One group of plants, the stonecrops (Sedum spp.), have adapted super­bly to this often harsh setting. Broad-leaved (also broadleaf)  stonecrop (Sedum spathulifolium) is an exceptionally attractive and abundant stonecrop reveling in the stony outcrops on the coast of our province.

Broad-leaved stonecrop of the Stonecrop Family (Crassulaceae), forms low, spreading mats in patches of densely-packed rosettes of flattened leaves. These leaf rosettes arise along a creeping stem called a stolon. Clusters of fibrous roots from the stem cling tenaciously to rocks and shallow soil spreading from crevice to crevice. About 15 leaves form the rosettes which typically re­ach 2-4 cm (0.8-1.6″) across. The fleshy, greyish-green leaf blades sit almost directly on the stem.  Each leaf broadens out wider than the base to a broad tip, hence the common name. Like many plants which survive in harsh dry places, this herb stores water in its thick leaves.

Broad-leaved stonecrop grows abun­dantly on coastal cliffs and dry sites on Vancouver Island and adjacent Gulf Islands but less frequently on the nearby mainland. The range ex­tends southward as far as California. Look for stonecrop along the shore and even well up mountain slopes in dry forest openings. 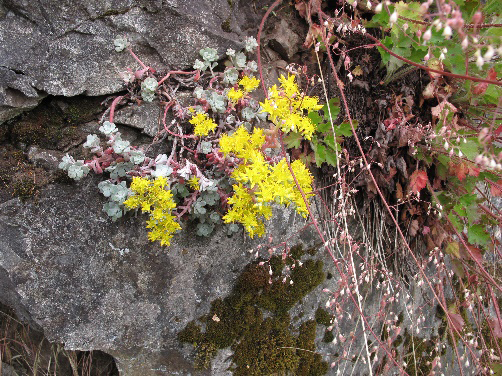 This stonecrop excels as a garden plant for dry sites. Simply plant a small piece of rooted stem in a little bit of soil. Try it in a rock garden, on a stone wall or next to a stone or gra­vel path. Even tuck it into a roadside rock face. Can you image what our rocky roadsides might look like covered in brilliant yellow? Once this plant takes hold, it will spread in a most attractive manner plugging cracks between rocks and blanketing rough spots. This species tolerates some shade too, although its form becomes gen­erally looser. Stonecrop needs little attention once established; remove dead stems after flowering if you wish, and keep grasses from rooting in the mat. As the patch expands you will be rewarded with plenty of offsets for new plantings. I have watched  a small piece double in size after a month and quadruple after a season. Broad-leaved stonecrop is one of the easier native plants to get because it is occasion­ally available through garden centres. Indeed, several forms, in­cluding some with reddish or pur­plish leaves, others with a bluish hue, are being sold. A grey-white variety called ‘Cape Blanco’ seems to be widely available. You could create a rock garden of varying hue by planting several different colour forms. Broad-leaved stonecrop is hardy to zones 5-6 in Canada.
First Peoples put stonecrop to some interesting uses. Nlaka’pamux (previously Thompson) People of the Fraser River Canyon boiled the whole plant and used the liquid to soothe cross babies and relieve constipation. Stonecrops, in general, were used to make poul­tices for treating piles.

The scientific name Sedum appar­ently was used for stonecrops in an­cient times, possibly derived from the Latin “sedeo” which means “I sit” as indeed it does on its favoured stony substrates. Come and see broadleaf stonecrop sitting around on the rocks in the Native Plant Garden of the Royal British Co­lumbia Museum in Victoria.