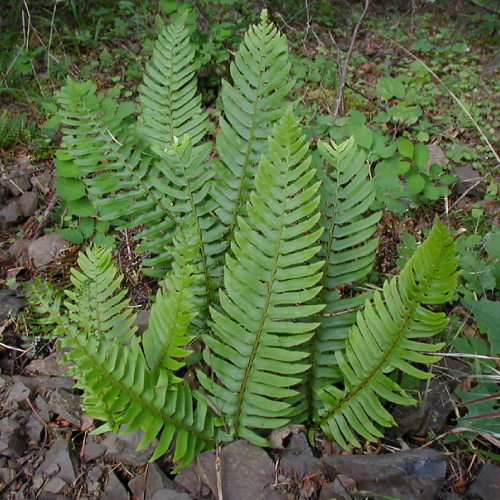 A young clump of sword fern.

British Columbia’s moist and mild coastal climate provides ideal conditions for ferns to thrive, so much so that several fern species are obvious and characteristic features of the conifer forest floor. Most abundant of all these ferns is the stately and lush sword fern of the Wood Fern Family (Dryopteridaceae).

Sword ferns grow into a large perennial clump of leaves spreading out from a massive crown. This crown consists of a woody mass of rhizomes (root-stems) buried in reddish brown scales and dead leaf bases. Roots explore the soil outward from the rhizome. In a mature well-established clump the crown may stretch half a meter (20”) or more in diameter.

Dark evergreen fronds stand stiffly from the crown. Fronds reach as tall as 1.5 metres (60”) and up to 25 cm (10″) wide. The lower third of the frond consists of a den­sely scaly brown stalk, called a stipe by botanists. The upper two-thirds of the frond have numerous narrow, pointed and toothed leaflets. Near the tip of the frond the leaflets become progressively shorter. Young unfolding leaves are at first curled like a shepherd’s crook or crozier, then gradually un­furl and expand.

Ferns are not flowering plants; they reproduce by spores which are microscopic pollen-grain like bits of plant tissue. Spores form inside tiny thin-walled sacs called sporangia. The sporangia of sword fern cluster in brown dot-like structures called “sori” (singular “soros”), which line the back of each leaflet of the frond. These many (= “polys” in Greek) lines (= “stichos” in Greek) of sori give rise to the scientific name Polystichum. The species name munitum (“armed”) derives from the numerous pointed teeth along the leaflets. 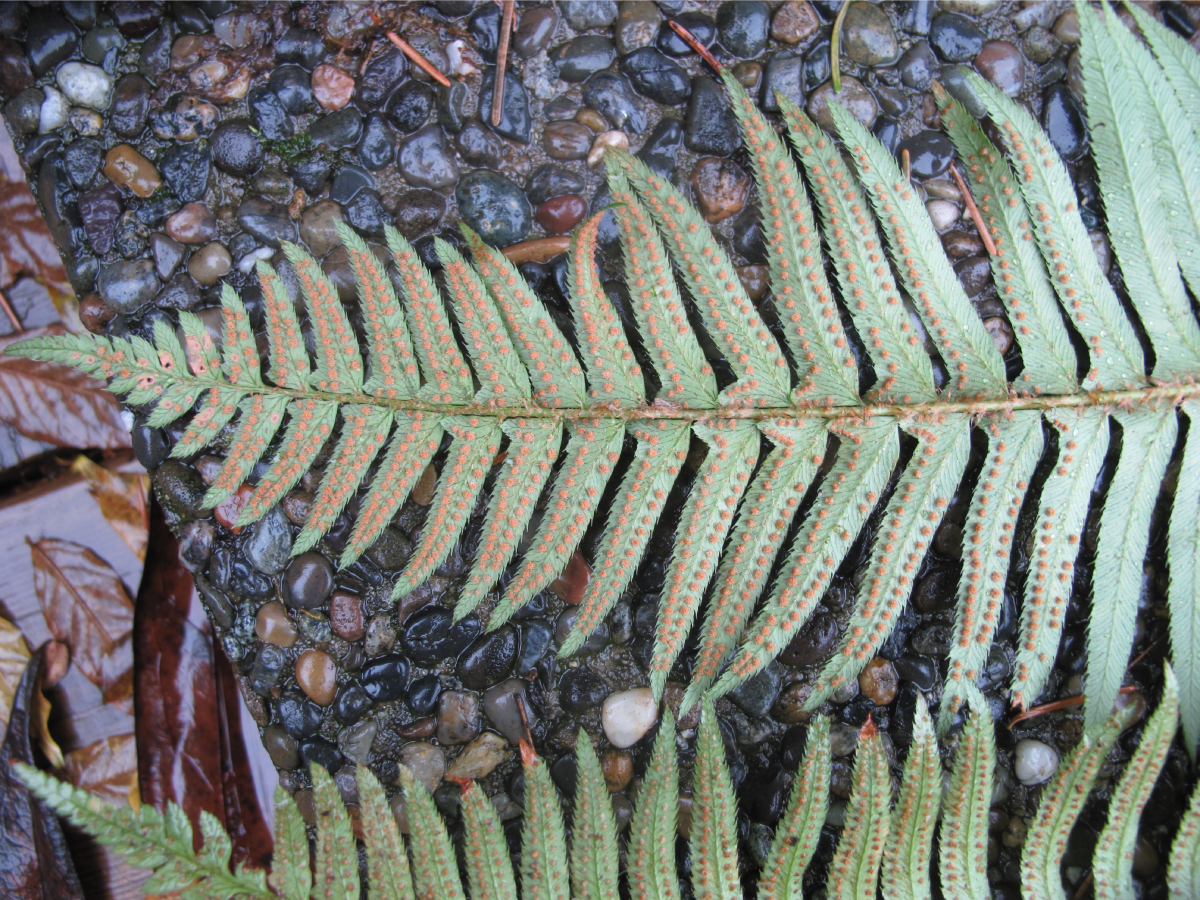 Sporangia split open and the spores drift to the ground where they germinate only if it’s moist. The spores grow into small delicate mini-plants called gametophytes with only one set of chromosomes, half of the double set of the much larger and robust parent. Male and female struc­tures develop on the gametophytes and male sperm swim to fertilize the female egg. Once fertilized, the egg develops into a proper leafy fern plant.

In British Columbia sword fern is dominantly a coastal species, occurring more than two-thirds of the way to the Yukon border. The range extends across extreme southern B.C. and adjacent Washington and Idaho in moist climates in the southeast part of the province. The North American range extends along the coast from Alaska almost to the Mexican border. Generally sword fern thrives in the shaded humus of the damp to moist conifer forest floor. In very wet forests you may see it perched on a shady rock face. Sword fern forms a distinctive association with western redcedar (Thuja plicata) on nutrient rich seepage sites. Fern clumps completely cover the forest floor, in a manner some­what reminiscent of a lush tropical jungle. A stiffer narrow-leaved species of sword fern, called imbricate sword fern (Polvstichun im­bricans) grows among boulders and in rock crevices in dry, usually open settings.

Aboriginal British Colum­bians used sword fern for various purposes. In spring rhizomes were dug, cleaned and roasted in open fires or earth pits. Cooked rhizomes were then peeled and eaten usually with grease or salmon eggs. The fronds were used to line pits for cooking root foods and to line boxes and baskets. Fern fronds also provided a decorative motif for basket designs.

Sword fern is among the easiest ferns to grow in the garden. Since this fern is so ubiquitous in coastal lowland sites, many suburban building lots come with their own supply. If possible it’s best to leave the clump where it sits, making sure there is shade. However the plants transplant readily and many can be easily rescued from development projects. Sword fern is one of the more widely available of our native species. So ask the owner of your local garden centre or nursery to order it in if you cannot get it from a friend or rescue site. Spores spread about a moist and shaded site will yield even more fern plants in a few years.

For best results, choose a shaded to partly open damp setting. In the Native Plant Garden at the Royal BC Museum we have used it in a mass planting under trees between two buildings where it suits the poorly lit situation much better than a high care lawn. Sword fern is ideal for a woodland garden, providing a lush verdant framework for the garden’s further development. Once established, the only care the fern needs is the removal of unsightly dry fronds in winter.

Try ferns in your garden: many are well suited for those difficult shaded sites. Ferns also illustrate how less-advanced plants reproduce without flowers. Visit the Native Plant Garden at the museum and see luxuriant clumps of sword fern and other fern species.