The Heather Family (Ericaceae) is well known in Canada for its many shrubby species such as blueberries (Vaccinium spp.), salal (Gaultheria shallon) and Labrador tea (Rhododendron gro­enlandicum; previously Ledum groenlandicum). We in British Columbia are fortunate to have the only tree-sized member of the Heather Family in Canada, the distinctive and handsome arbutus (Arbutus menziesii) also known as Pacific madrone, madrona and strawberry tree.

Arbutus grows into a multi-stemmed shrub or tree with crooked trunks sometimes twisting their way up to 35 m (approxi­mately 120′) tall. The smooth reddish bark stands out from that of all other trees in our province. It flakes off in the late fall, being replaced by young greenish yellow bark from beneath as the trees begin to swell and grow with fall mois­ture. 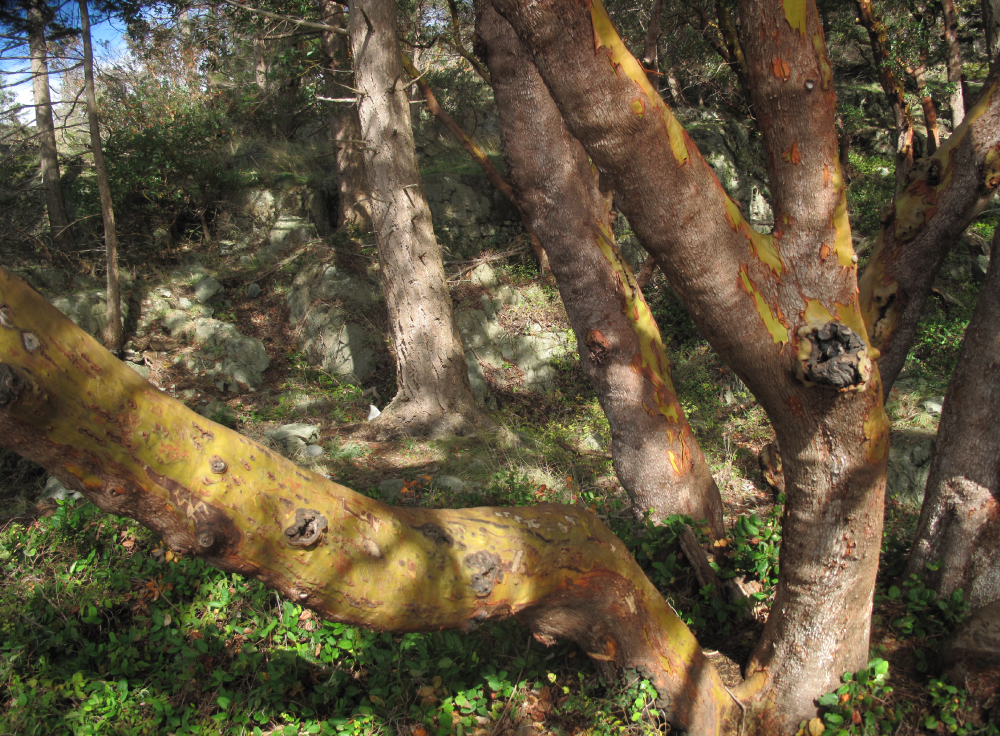 Leathery, oval evergreen leaves cluster toward the ends of the branches. Above they are shiny green, but below they are pale. Typical leaves range from 5-15 cm (2-6”) long, Young shoots bear finely toothed leaves whereas those of mature shoots have no teeth. 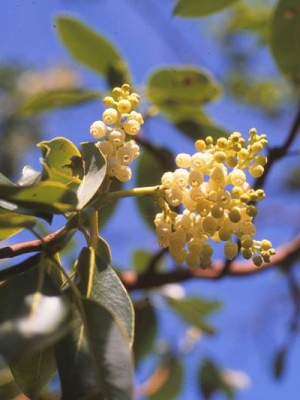 Like bunches of grapes, great clus­ters of creamy or pinkish white, honey-scented flowers adorn the ends of the branches. Each small flower resem­bles a tiny white bell, pinched in at the mouth. The tips of the petals form five little teeth, a feature common to many flowers of the Heather Family. Within the flower nestle 10 stamens and a sin­gle five-parted pistil.

Brick-red berries form in the late fall and persist well into winter. Each fruit in the cluster is about a centimeter (0.4″) across and covered by tiny little bumps. Birds, especially grouse, feast on these attractive fruits.

The geographic range of arbutus hugs the Paci­fic Coast of North America from south­ern British Columbia to California. In our province, arbutus occurs on the southern two-thirds of Vancouver Island, especially the east side, and the adjacent Mainland almost to Knight Inlet. Rocky knolls and cliffs provide the classic hang-out for the species. The tree appears to wrest nu­trients from the bare rock itself. Arbu­tus grows extremely well in open dry Douglas-fir (Pseudotsuga menziesii) woodland and forest, where the soils are deeper. On these sites, trees can re­ach great girth and height at times forming “magical” groves. In Victoria arbutus trees and shrubs appear in boulevards and on roadside banks “inoculated” so to speak, by perching birds

Once established, arbutus makes a superb, undemanding garden and landscape plant. Evergreen leaves, exquisitely attractive bark, beautiful flowers and brilliant berries are out­standing features. The only draw­backs may be the cleanup of the leaves, particularly in the late summer, and the lack of frost tolerance. There is also a stem canker present in the re­gion which can kill branches. 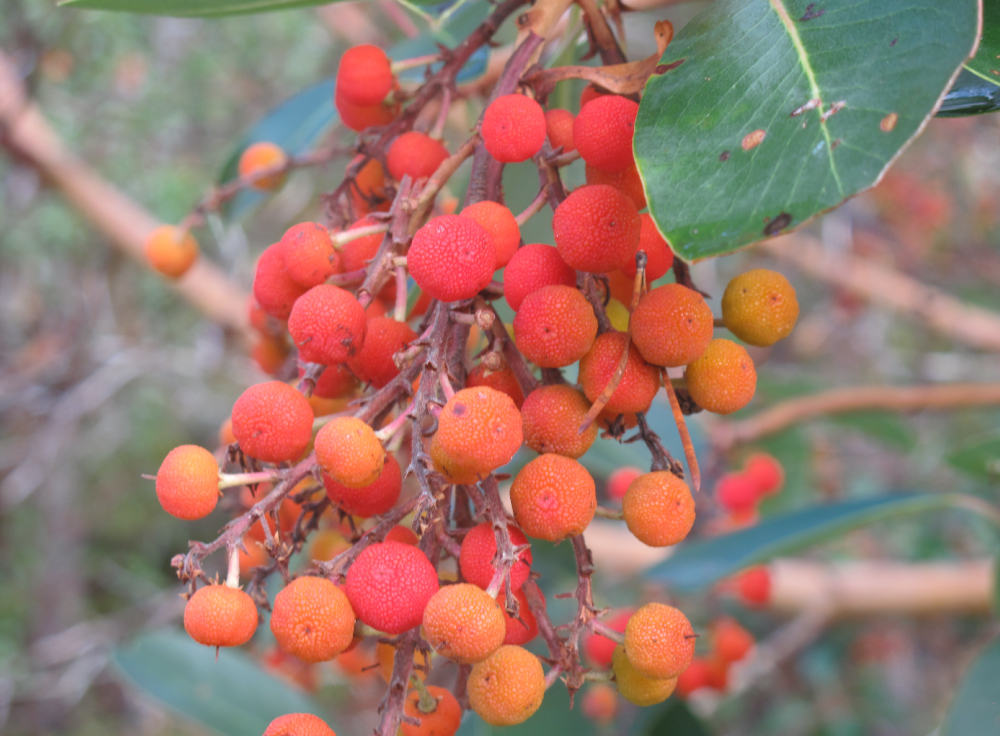 The easiest way to have arbutus on your property is to leave and encourage already estab­lished plants. You can raise arbutus with relative ease from seed sown in the fall and covered lightly in a peat-potting soil-sand mixture. If you have a very dry south, or west-facing site, simply spread fruits collected in the fall, and you will be surprised at the rate of successful germination in places where you could never expect to plant a seedling. Arbutus plants lar­ger than 20 cm (8″) tall are almost im­possible to transplant and should ne­ver be dug up. Move only seedlings from waste sites with loose soils in the wettest part of the winter. Be sure to dig up the entire root and keep as much of the soil attached as possible. Occasionally, potted seedlings are available at garden centres and native plant sales.

Aboriginal peoples put arbutus to assorted uses in technology and me­dicine. Saanich people used the wood for spoons and gambling sticks. The Sechelt made keels and sterns for small boats from the hard wood. Dye from bark was used to color wooden utensils and camas bulbs in cooking pits. On the Saanich Peninsula, leaves and bark yielded medicines for colds, stomach problems, tuberculosis and birth control.

The scientific name Arbutus is the same name as Romans used for a simi­lar and closely-related tree known as the Strawberry tree (Arbutus unedo) The spe­cies name, menziesii, honours Archi­bald Menzies, Royal Navy botanist and surgeon, who collected many plants in our area in the 1780’s and 1790’s.

You can see and learn more about arbutus and many other members of the Heather Family at the Native Plant Garden of The Royal British Columbia Museum, 675 Belleville Street, in Victoria, B.C.