Who doesn’t love Lego™? Lego™ is one of the greatest toys ever imagined by the human brain. Kits range from fantastically complicated, to incredibly simplistic. But the underlying element of completeness is the same. The kit must be complete to be built as the instructions suggest, but that doesn’t mean a Lego™ kit stays in its original configuration. 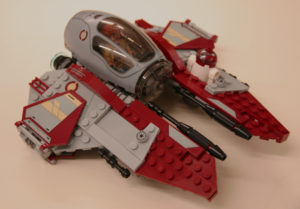 Sometimes pieces vanish – but you can easily find substitutes. The more changes you make, the more obvious those changes become.

It’s the same with nature. Ecosystems are incredibly complicated (such as the Amazon jungle) while others seem simple (the dune sea of the Sahara). Swat one gnat and you won’t see change in an Amazonian forest, remove a gnat species and you still may not see a change. Each missing species is far more obvious in relatively simple ecosystems. Fortunately, nature is resilient and has recovered from repeated perturbation and mass extinctions (the loss of many pieces (I mean species)) all the way to the present epoch (the Plasticcene ?).

When you replace missing parts in a Lego™ kit, the final product will not be exactly the same, but will look reasonable and will hold together. You can look at the instructions to know what’s missing. You can swap parts from other kits (part 302126 is common to many Lego™ models). You can order replacement parts.

In nature there is no list of parts to identify exactly what’s missing, and once things are lost, there is no mail-order replacement. Once something biological is gone, it is irreplaceable. Given enough time though, nature will fill an ecological void and restructure an ecosystem, but the ecosystem will never be the same. A restructured ecosystem may look unchanged to our eyes, but it is different in both function and species composition. Fortunately for us, change is the only constant in nature. Our origin (and subsequent invention of plastic – and Lego™) and our continued existence on this plastic-polluted-planet, is a direct result of nature’s resilience.

The loss of a Keystone Species changes the ecology of a region significantly. There are parts in each Lego™ kit which are critical to the model’s integrity, and in this sense, they parallel Keystone Species. Lose one keystone piece and your model won’t be as structurally sound, but will still hold together if there is built-in redundancy – in nature, this could represent the death of one cell in a phytoplankton bloom. You’ll never notice its absence. Organisms die every day and populations muddle on as nature permits.

In this Lego™ model, there are several hinge parts per wing which keep the entire model together – the model has built in resilience. Imagine how the model changes as one by one, more of these hinge pieces go missing? Bit by bit, the wing joint weakens. Hinges have to interact with other pieces of the model to maintain the integrity of the entire population of Lego™ pieces. If the population of hinge parts is depleted, the wings will fall off.

In recent years, large numbers of dead alcids are not an uncommon sight in the eastern North Pacific Ocean. The warm north Pacific conditions from 2012-2015 have correlated with mass mortalities all along the North American west coast. Rhinoceros Auklets and Common Murres have washed up right here in the Victoria region – this is not someone else’s problem. This Common Murre was found this summer and was photographed by Allan Eppler. Wings have fallen from our skies.

The fishes that our alcids eat still exist along our coast – so why are marine birds starving? What piece of the ecolegological model is missing? The recent and rapid decline of plankton communities may be to blame. Phytoplankton feeds zooplankton, zooplankton feeds small fishes, and small fishes feed our alcids. These stumpy birds rely on small fishes like sandlance and herring, and in this way, are indirectly connected to phytoplankton (and so are we). Is the decline in phytoplankton populations having a trickle-down effect? Are local zooplankton and fish populations declining in concert with phytoplankton? Perhaps fishes have moved elsewhere (deeper? offshore?) to track phytoplankton and zooplankton blooms? Fishes may only be out of the range of diving birds at an energetically critical time in the bird’s year? Perhaps fishes are now less nutritious with changes in plankton communities? Is this a temporary change? What will be the feedback effect on the marine community if our alcids disappear? And is this the latest ratchet in our environment – a long-term trend in our coastal community creating the “new normal” for our grandchildren? All questions worthy of study.

Temporary and permanent absence of a species has its effect in nature. The long term decline in oceanic phytoplankton communities has gone largely unnoticed by the majority of people – until its impacts rippled up the food chain and hundreds of emaciated birds washed ashore. Dead plankton sinks into the abyss every day – no one raises an eyebrow. But when a beach is littered with dead birds, we sit up and take notice. Each organism, microscopic or not, is a piece in the ecological integrity of our region, and the loss of each piece changes BC forever. Perhaps a Lego™ model is a poor analogy of the complexity of nature, but we failed to notice the loss of countless smaller parts, and only reacted when a continuing number of larger pieces washed up dead on our shores. I have to wonder what BC’s model will look like in 50 years. Have we already become unhinged?