Everyone loves a mystery. Some chase the impossible – like Cadborosaurus – the mythical mega-sea-serpent described by Bousfield and LeBlond. I prefer to look for long-shots that are possible, like Pygmy Short-horned Lizards and Western Fence Lizards in the Okanagan, or the Western Skink on Vancouver Island and some of our adjacent islands. You may think it is nuts, and a waste of time to look for things that probably are not here. But anecdotes from this last year have got me thinking… or is it dreaming… of lizards with bright blue tails here in my back yard. 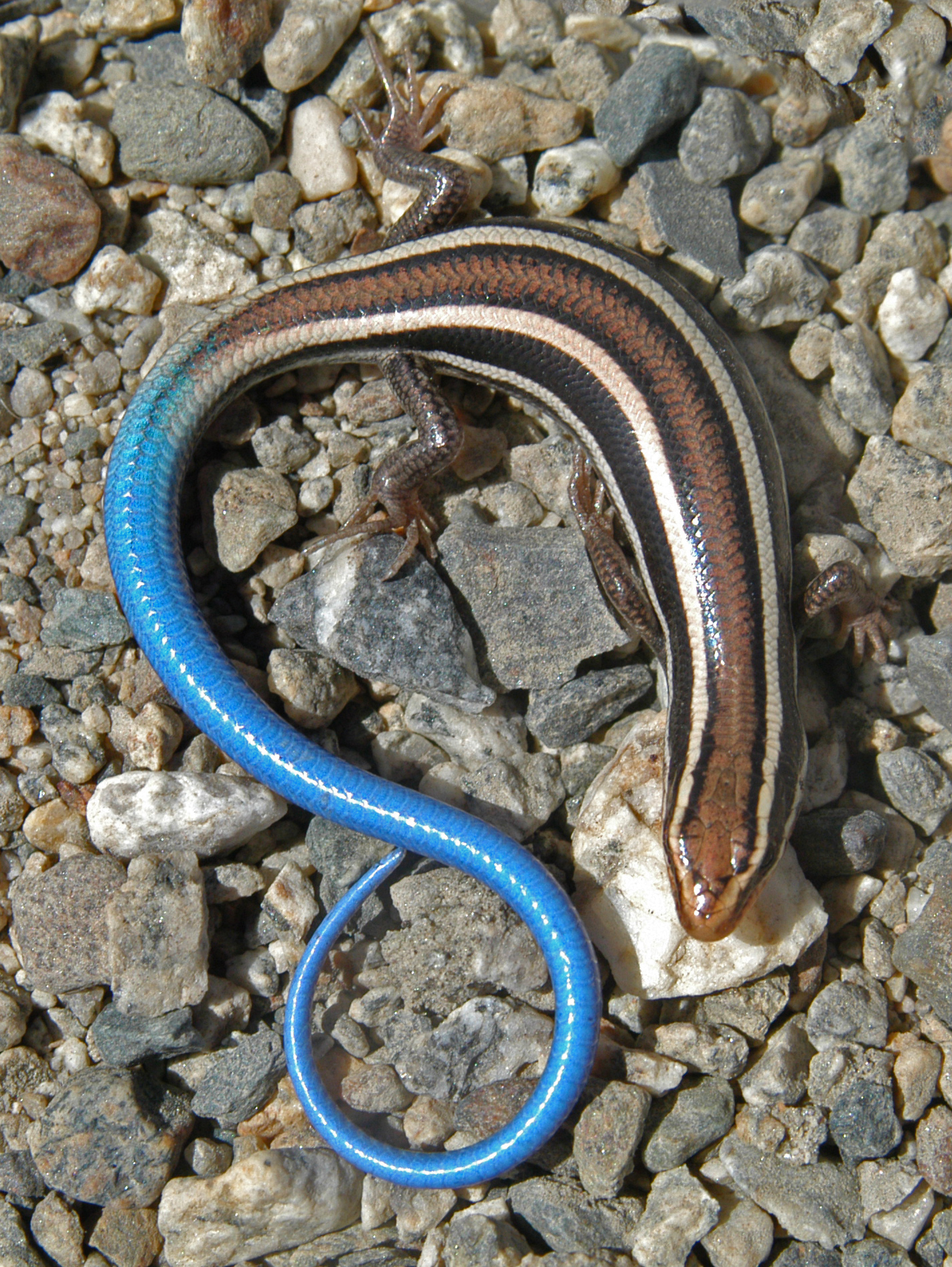 A colleague of mine, Purnima Govindarajulu (Ministry of Environment) received a report of a blue-tailed lizard from Denman Island. I heard of a blue-tailed lizard near the junction of Wallace Road and West Saanich Road here on Vancouver Island. Another interesting email from the Brentwood Bay area came in this last week of June which stated,

“The wall lizards appeared years ago. I use to find blue tail skinks around – I know they are still on Saltspring island – I spent years there as a kid and use to see them often. They were occasionally on my parents property, but maybe have been pushed out by the wall lizards.”

Yes these are anecdotes with no accompanying photographs, but they are worth investigating. Why? Martin McNicholl, who was at the University of Alberta at the time, published a sight record from 1975 of a skink with a blue tail from near Courtenay. This 1975 record pre-dates the explosion of European Wall Lizards on Vancouver Island. However, the Courtenay record is considered questionable in the 2002 COSEWIC report by Kristiina Ovaska and Christian Engelstoft, as well as by Allan St. John in his book on reptiles of the northwest. In other words, conventional wisdom says that in BC, Western Skinks exist in the dry interior from the Princeton area east to the area around Creston, and nowhere near the coast. But people are reporting lizards with bright blue tails here on Vancouver Island.

While wall lizards are becoming super abundant on Vancouver Island and spreading to some of the other nearby islands, Western Skinks in BC receive comparatively little attention. McNicholl’s report of a skink near Courtenay all but faded into academic obscurity – and I have to thank Pat Gregory (the herpetology professor at UVIC) for reminding me of McNicholl’s article.

If skinks are not here, then what are these blue-tailed lizards people are talking about? Super colourful wall lizards? Lacertids from some areas of Europe are extremely colourful – some are bright blue. Do we have more than one species of lacertid loose here in southwestern BC?

Here is where I have to ask for help – citizen science is the best way to search for the notorious “needle in a haystack”. I have two eyes, collectively we have thousands. If you are out on a walk – especially on Saltspring Island, sitting in a park, or in your back yard and you see a lizard with a blue tail, please take photos. Even smart phone photos like this one I took at Borden mercantile are sufficient to identify what species you have found.

My first evidence of Wall Lizards at Borden Mercantile – an iphone photo taken moments before I stepped on a rusty nail. No one ever said science was easy.

This earlier blog article has a key to the species of lizards found here in BC – you can select features in the key that can guide you to a correct identification. If you find a Western Skink here on the Vancouver Island or one of the Gulf Islands, or any other unusual lizard, then please get as detailed a set of photos as you can, and forward them to me at the Royal BC Museum for verification.

Ovaska, K.E., and C. Engelstoft. 2002. COSEWIC status report on the western skink Eumeces skiltonianus in Canada. Committee on the Endangered Status of Wildlife in Canada. 19 p.