There is an interesting print of George Winkler among his photographs in accession 197908-016.  This particular photograph was taken by Miss M. [Mary] Spencer of Kamloops in 1906 and shows Winkler (back left) and three other men.  What were they commemorating?

There are two copies of this print.  Winkler wrote “Jail Birds 1907” [sic] on one, and “taken at Kamloops on release from gaol” on the other.  It is usual to have a formal portrait taken after release from jail?  What were they in for?

The explanation for the photograph showed up in Winkler’s files in accession 89-1390.  Winkler kept a scrapbook which he called his “book of crimes”.  Here he pasted in newspaper clippings covering his activities in March and April 1906.  While living in Penticton, Winkler and a group of local men took it upon themselves to expel 10 Chinese workers from town.  It was a labour issue;  W.T. Shatford, local M.P.P. and managing director of the Southern Okanagan Land Company had brought in the Chinese workers.  Winkler, a socialist, took exception to importing foreign workers to work locally at a lower rate.  Along with a group of Penticton residents, he escorted the Chinese men to the lake steamer and paid their boat tickets out of town.  A police constable was apparently there but was unable to convince the residents to desist.  The ringleaders were arrested and a magistrate led trial was held.  They were offered the choice of a $25 fine or 30 days in the Kamloops jail.

Two of the men charged paid the fine and in fact the residents had a whip round to raise the funds to cover all the fines; however Winkler and three of his cohorts choice to go to jail to make their point.

When they got out of jail in Kamloops, they had their portrait taken to commemorate the event. 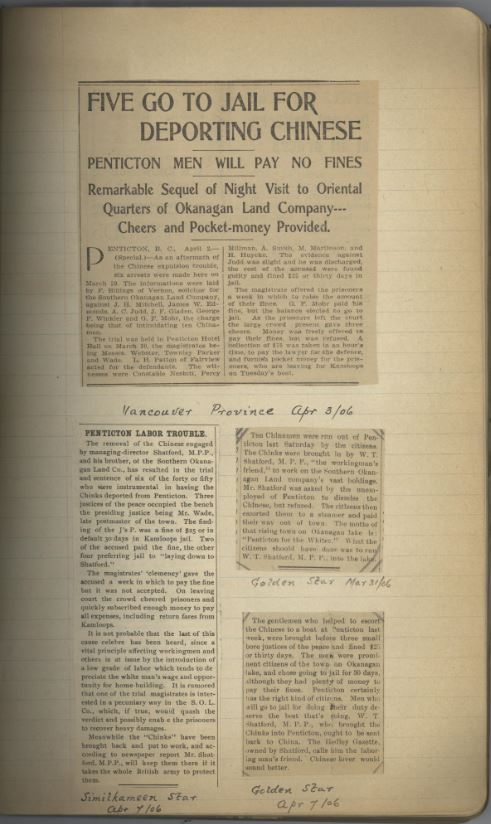 Incidentally, a month after she took the photograph of George Winkler and his friends, Mary Spencer photographed the more famous train robbers Bill Miner, Shorty Dunn and Louis Colquhoun.

The Kamloops Museum and Archives are currently showing an exhibit of Mary Spencer’s photographs from now until June, see http://www.kamloops.ca/museum/index.shtml