A Day in the Life of a Conservation Intern, by Rachel Stark

I have now been interning in the Objects Conservation Lab at the Royal British Columbia Museum for a little over a month, where I am completing the final requirements for the Fleming College Cultural Heritage Conservation and Management program.

Every day in the lab is a new adventure. Some adventures are slightly less exciting, like vacuuming the litany of artifacts that don’t require a serious treatment but still need a clean-up. Other adventures turn out to be an exciting mystery to test your wits and exercise your fear of heights!

Last Tuesday started like any other. I had a little condition reporting planned, maybe some rehousing of objects in the history collection, no big plans. Then we got the call: An exhibit tech had noticed insects on the sea lions in the BC Seashore diorama. Kjerstin and I travelled upstairs to the galleries to check it out. We picked several dead beetles off of two of the sea lions, and a number of shed larva skins from a Pigeon Guillemot’s butt. On inspection, these were definitely examples of adult carpet beetles, and the shed larva skin of their young. Horrifying! 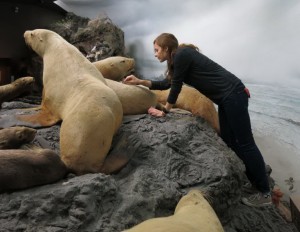 Picking insects off the sea lion

We decided to launch a vacuum attack, with Exhibit Tech Megan and Kay from the Paper Conservation Lab, and after carefully donning nitrile gloves, dust masks, and lab coats (to protect us against dust, dead insect bits, and the potential of poisonous pesticide residues that sometimes accompany taxidermy specimens) we started to scour that diorama. 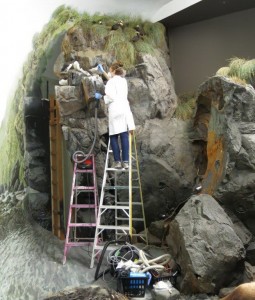 Vacuuming the birds, perched on a ladder

We vacuumed every mammal and bird, and a good deal of the rocks and seashore in between. Some were high up on simulated rock cliffs, and I had to perch on a ladder to reach them!  Most of the mounts in the exhibit turned out to be fine, and were untouched by insects. We did, however, find a number of adult carpet beetles on the sea lions, all dead.  The only larva skins found were those on the Pigeon Guillemot, and although we also found some strange, well desiccated eggs on another bird, on consultation with Claudia the entomologist, it was decided that they were unrelated and probably very old. 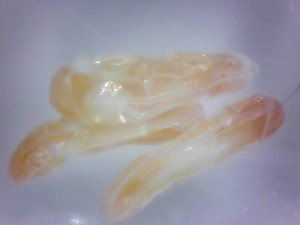 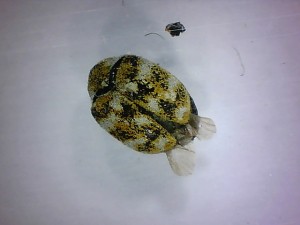 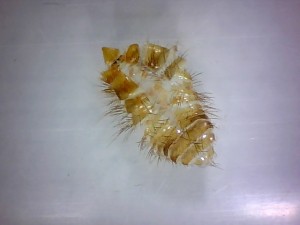 The mystery here is: Where did the carpet beetles come from? And how did they die? What were those eggs? The eggs are from an insect that would probably not harm the collection, and were most likely laid there a long time ago, perhaps by a fly attracted to the delicious smell of a dead pigeon. Carpet beetles are a more serious problem, and can do a lot of damage if left unchecked. Other dioramas in the same section of the RBCM have had issues with them in the past, and have dealt with them with success. The going hypothesis is that the larva hatched on the pigeon, and had a happy life there until they became adults. They then travelled to the sea lions, where for some reason they died. Because of this, the possibility of pesticide residue on the sea lions is again something to be wary of. Until they can be tested for contaminants, it will be important to wear gloves, a dust mask, and a lab coat when cleaning or examining them.

At the end of the day we could rest assured that the BC Seashore at the RBCM was safe from carpet beetles- at least for now!