Cut, Paste and Spin- an email exchange of a year of artmaking

Here you go Chris.  Feel free to cut and paste as necessary, I kind of diverge from the questions a bit.

For the last year, Aimée van Drimmelen, Lindsay Delaronde and Gareth Gaudin have been poking around the collection areas of the Royal BC Museum as artists in residence.  The three of them each have approached the objects and ideas within the museum and archives from their own creative sensibility.  I’ve gone back to look at some of Aimee’s emails to the group, asked her some questions about her spinning animations over this last year, and created this collage.

Oh, one more thing Aimée…Our next issue of Curious Quarterly is being shaped right now, and the theme for this round is ‘time’.  I thought your spinning animations would be a great addition, as they have a lovely timeless quality to them.  Would you be interested in having them in the issue and potentially writing something.  Or I could write something.  I don’t think there needs to be much text, they are pretty great the way they are.  But I thought even a paragraph or two about the time it takes to make them, about the process could be interesting.  Even an interview…I could even email you a few questions and you can just respond as a format.

What do you think? 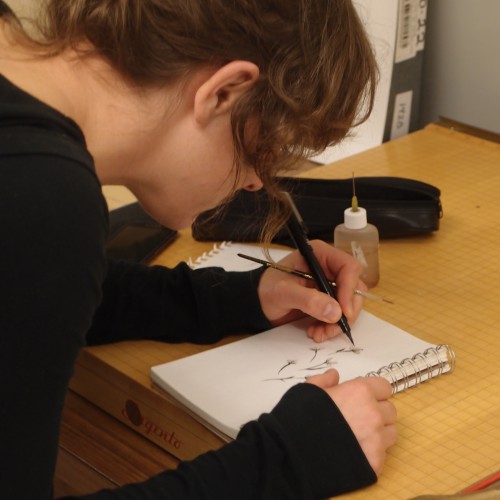 Hey all, I just realized that I double booked this Tuesday – I’ve got a radio interview at 4pm so I won’t be able to make the trip to see the birdies.

Are there particular objects that you think translate well to animating?

For the “stuff spinning around” pieces (as with most of my art actually) I tend to gravitate towards objects/subjects that I find visually interesting and attractive, but which might be perceived as mundane or everyday. I did a series of animations of my favourite shoes and boots for example, simply because I love them. The first piece I ever animated in this way was a globe spinning (it’s on the sidebar of my blog). I like to be able to look at something in order to draw it. This was the first thing I found that I could easily move as I sketched. It’s so simple but I love the way the colours and shapes dance around like they’ve got a life of their own.

Hi guys, I can bring the sketches tomorrow – unfortunately my computer is in the hospital otherwise I’d scan and edit them and send digital files… wondering if there’s a computer there with photoshop? In which case I could just work on them there. I prefer to edit my own images, as playing with the contrast is often necessary to get the ink looking its best. Let me know what you think.

What is the process that you use to create the animations?

With these pieces my technique is to draw each image side by side on the same page as opposed to using a light table. I think this approach is pretty unconventional, but I do it for two reasons. First off, it’s a great drawing exercise. It forces me to trust my eyes as I move from still to still. The results are far from perfect but I believe this process gives them a life of their own what wouldn’t be there if I had used a light table and drawn one image per page, perfectly matched to the previous image. The pages with each still side by side are almost more important to me than the animation itself. The exposed process and sequential nature of the imagery holds a power of its own, like Edweard Muybridge’s photo experiments. The resulting animation is just the icing on the cake. This “deconstructed animation” technique features in a lot of my recent artwork on drumskins too. I think it engages the viewer, encouraging them to see the object/subject in new ways and to think outside the box.

Also, Quick question – Chris, can you ask Anne from archives (that’s her name right?) if it’s alright to mention the Emily Carr pieces we saw for my blog post?

What is it about the spinning that interests you?

It is just a simple way to bring something to life, to show it from all angles and in effect put it on display. I see it as a way to take a sketch to the next level, and a great way to combine two of my favourite artistic activities, location drawing and animation. These animations are fun exercises for me. I don’t find the process as intimidating or time consuming as a regular progressive animation can be. Each piece is typically made up of 12-15 images as opposed to hundreds and hundreds.

I really really enjoyed the archives. I’ve been thinking so much lately about the decline in hard copy evidence of our current times and what that will mean for the future. Seeing the hand lettering and sketches from so long ago really brought stuff home for me in an unexpected way… Anyway I’ll try to describe it in my next blog post.

Do you ever consider a soundtrack to go with your spinning animations?  If so, what has come to mind?

Sound is secondary at the moment although I like to have audio behind the images when I pose them on my instagram. Just simple stuff like a loon call or a bee buzzing. I do collaborate with my partner/bandmate Kees Dekker on visual/audio stuff though so there will definitely be more of that happening in the future.

Thanks again for the meeting yesterday, it was a great starting point. The idea that sparked the most for me in terms of my role as resident artist is that of “reportage” illustrator, drawing from behind the scenes and from events. Capturing specific artifacts and also the public interacting with the museum. The sketches could be posted with your recaps as a fun way of promoting the activities that happen at the museum. Does that work for you in terms of participation?

Another thought I had is that it would be cool if there was a museum blog (or facebook, etc) where we could guest post ever week or so with observations and findings, sketches/photos, or personal work that could relate to something happening at the museum. I did this during an illustration residency I did in NYC and also when I did my animation with the NFB, and it’s a great way for the public to get to know what the artists in residence are up to and have a bit of a dialogue, ask the readers questions, answer questions etc.  Might be too late for this year, but just putting it out there.

Finally maybe in conjunction with another event nearer the end of the year we can put together a little exhibition/presentation of the work we did over the year for public view. Even in the lobby on the opening night of an exhibition or imax film?

Anyhoo, just thoughts. Let me know what you think!

Check out the art opening of the Artists in Residence on Friday November 21.