Commission into all matters affecting the value of lands of the former Songhees Reserve. 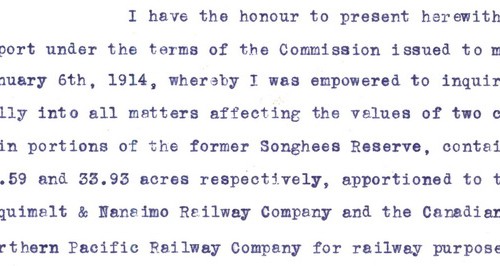 The following is a transcript of the “Commission into all matters affecting the value of lands of the former Songhees Reserve apportioned to the Esquimalt and Nanaimo Railway and the Canadian Northern Railway.”

The commissioner, Judge of the County Court of New Westminster, Frederick W. Howay, was appointed 6 January 1914 to investigate all matters concerning the value of two parcels of former Songhees land which had been apportioned to the Esquimalt Nanaimo Railway and the Canadian Northern Railway for railway purposes

Images of the report follows the transcript.

My thanks to Sheila McCall, a valued RBCM volunteer, for transcribing this document.

I have the honour to present herewith my report under the terms of the Commission issued to me on January 6th, 1914, whereby I was empowered to inquire fully into all matters affecting the values of two certain portions of the former Songhees Reserve, containing 29.59 and 33.93 acres respectively, apportioned to the Esquimalt & Nanaimo Railway Company for railway purposes.

The first sitting of the Commission was held at the City of Victoria on January 28th, 1914, and was continued at various dates during February and March.  Though notified, the Canadian Northern Pacific Railway Company was not represented at any sitting; the Esquimalt & Nanaimo Railway Company appeared on two occasions during the later sittings.

I have been offered evidence in regard to this land from two stand points: 1st, its value as future business and residential property: 2nd, its value for use as railway yards, tracks and terminals.

Inasmuch as the Esquimalt & Nanaimo Railway company placed some evidence before me I will deal first with the area allotted to them.  This portion may be generally described as largely composed of a rocky mound rising to a height of about eighty feet above the water.  At present it is in a state of nature.

Evidence was offered to show that this land would, if subdivided into town lots, produce an average of about $34,000. an acre.  It was claimed by some witnesses that this would be received without any outlay for improvements in the way of streets, sewers, or drainage.  I am unable to accede to that view.  I cannot conceive that the Government could contemplate offering the property for residential or business purposes without providing reasonable access and modern conveniences.  I am supported in this view by other witnesses.  Opinions vary, naturally, in these matters of probable value in accordance with temperament.  But I am of opinion that the City Assessor, Mr Northcote, who has had twenty five years experience, is right in estimating the net value of the land from the point of future business and residential property, at about $24,000. an acre.

But the Esquimalt & Nanaimo Railway Company urges strongly that this is an unique case, into which enter other considerations.  They have put the matter before me along the following lines: After pointing out that none of the 29.59 acres touches the water front, the company foes on to show that they have already access to the City of Victoria, and over their own right of way through this land; that they have their present station on Store Street, and also their present freight yards, they claim that nevertheless, in order to accede to the governments wish, and as part of a plan for the benefit and development of the City of Victoria, they are willing to lay down new tracks to a new depot at a point, and on a grade selected by government.  This, they say, entitles them to be treated differently from an ordinary purchaser.

They then contend that to meet the changed condition it will be necessary for them to reduce this rocky mound to a uniform grade in order to lay their tracks to the joint depot, and to place the necessary sidings.  The excavation thus required is, according to Mr F.C. Gamble, the provincial Railway Engineer, 287,541 cubic yards, which at $1.40 a yard he estimates at $402,000.  Referring to this point, Mr Gamble says, “I don’t know any more difficult place to develop a railway terminal than that; no railway of their own choice would do it.”  The Esquimalt & Nanaimo Railway Company estimated this excavation  at a rate of $1.80 a cubic yard, which they have satisfied me is what similar work there has cost.  I accept Mr Gamble’s figures, inasmuch as they were very carefully taken off by a plinometer, while the company’s were admittedly only approximate; but I accept the company’s rate, as being fixed by experience in this very locality.  This excavation therefore would cost, when completed, over $517,000.  To this amount the company adds sums for cost of tracks, ballasting, &c., for new freight sheds, for approximate cost of share of joint station, for buildings – round house &c. – already built, amounting in all to some $274,000, and making with the excavation a grand total of almost $800,000, over and above  the amount that they must pay for the land itself.  They urge that in considering what they can afford to pay, they must regard it from this business point of view, remembering that the money expended therein is unproductive.

Another matter strongly put forward by the company is the historical aspect.  It is said that in 1886 the late Sir John A. Macdonald promised to the late Robert Dumsmuir, then its President, a portion of the Songhees Reserve for terminal purposes; that in 1892 an order-in-council of the Dominion Government authorized the company to expropriate fifteen acres, which were valued by Mr A.W. Jones at $50,000., and later reduced to $45,000.; that in 1895, another order-in-council authorized the company to expropriate eighteen or nineteen acres, that in 1907, the matter was the subject of an agreement between the City of Victoria and the Provincial Government; that in 1909, the Victoria Board of Trade passed a resolution urging the Government to surrender its reversionary rights in the eighteen acres in order that the railway company might obtain the possessory rights of the Indians and remove to that spot the repair shops, round houses, and coal bunkers.  Though it was not produced before me, such an order-in-council, I am informed, was passed, but the company abandoned its rights thereunder in order to facilitate the Government’s negotiations with the Songhees Indians.

Finally the company urges that it has removed to Victoria the repair shops and round houses for the whole system on Vancouver Island, thus increasing its payroll in the city by from $4,800. to $5,000. a month.

I have thus set before you at considerable length the various arguments that have been adduced before me, and the various points upon which evidence has been submitted.  The company’s statements as above outline have received in a general way the support of Mr Alexander Stewart, the Mayor of Victoria, Mr McNeill, the Chairman of the Finance Committee, and Mr Northcote, the city Assessor, each of whom gave evidence.

The total cost of the purchase of the Indians’ possessory rights in these lands was about $6,240. an acre.  To this must be added the value of the reversionary rights of the Province.  At the same time the liberal treatment accorded to various railways for terminal facilities in cities, as for instance, in the City of Vancouver, cannot be overlooked as an element of consideration.

I have endeavoured in considering this matter to appreciate the strength of the factors upon both sides, but I must acknowledge myself to have been much impressed by the evidence of the persons just mentioned who strongly urged upon me that it is in the interest of broad policy, solid development and the continued prosperity of the City of Victoria, and of Vancouver Island as a whole, that the Esquimalt & Nanaimo Railway Company should be dealt with herein in a liberal manner, and that the valuation of these lands should be on the basis of their user for railway tracks, sidings and terminals – for railway purposes.  These persons informed me that they had been prepared to value the 29.59 acres at $10,000. an acre for assessment purposes, and that the assessment of the seven acres of the existing right of way is $73,000.

Bearing in mind the relation ordinarily existing between assessment and selling values I find and accordingly report;

In reference to the 33.93 acres allotted to the Canadian Northern Pacific Railway Company, as I have already stated that company did not appear before me, and I have not, therefore, had the benefit of any figures on its behalf.  I have, however, made a careful inspection of the property in company with (amongst others) Mr Iche, of the Government Railway Engineer’s Office.  While there is considerable excavation to be done by this company, it will not be nearly as heavy as that required to be done in the case of the other railway.  However, the same large public interests which would in my opinion justify the treatment of the one railway, on a liberal basis, apply to the other also, and in regard to this acreage I therefore make exactly the same findings as above given, viz;

I have also the hour to enclose herewith a copy of the evidence which has been submitted to me at the various sittings of the Commission.

I cannot conclude this report without grateful acknowledgment of the services which have been rendered herein by Mr C.F. Davie, who represented the Government before the commission, and by Mr P.R. Fleming, who has been indefatigable in rendering every assistance in his power.

I have the honour to be. 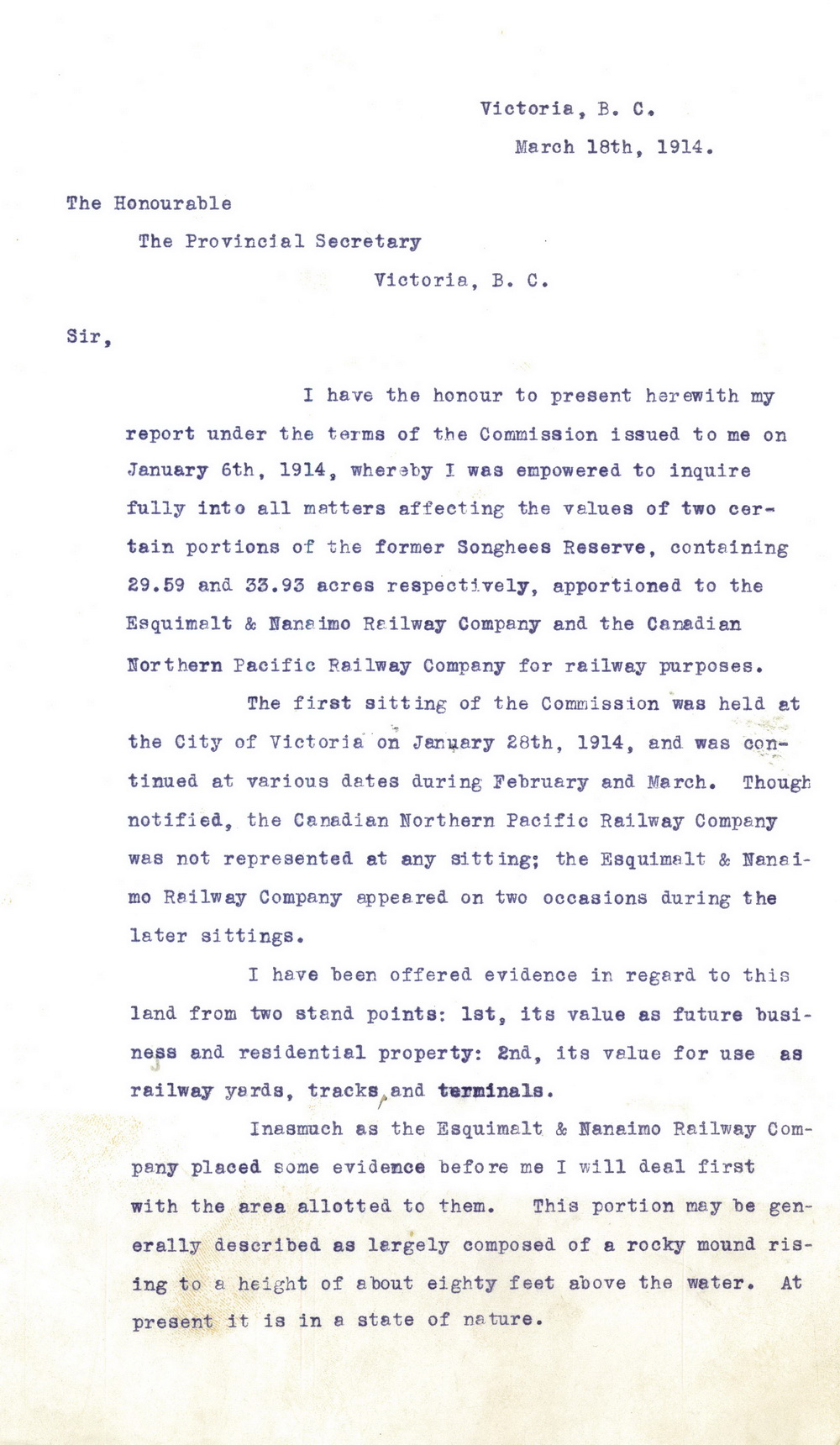 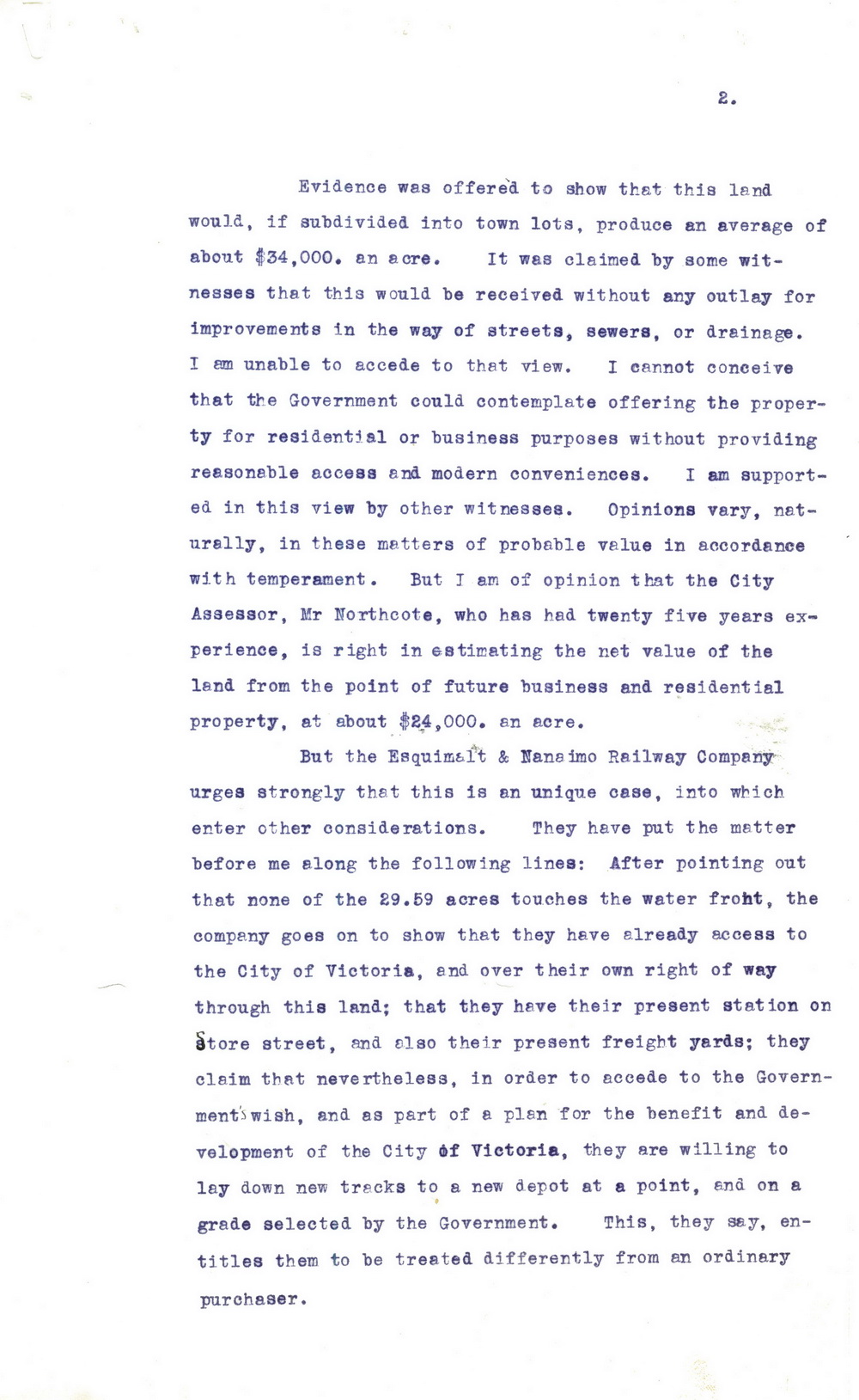 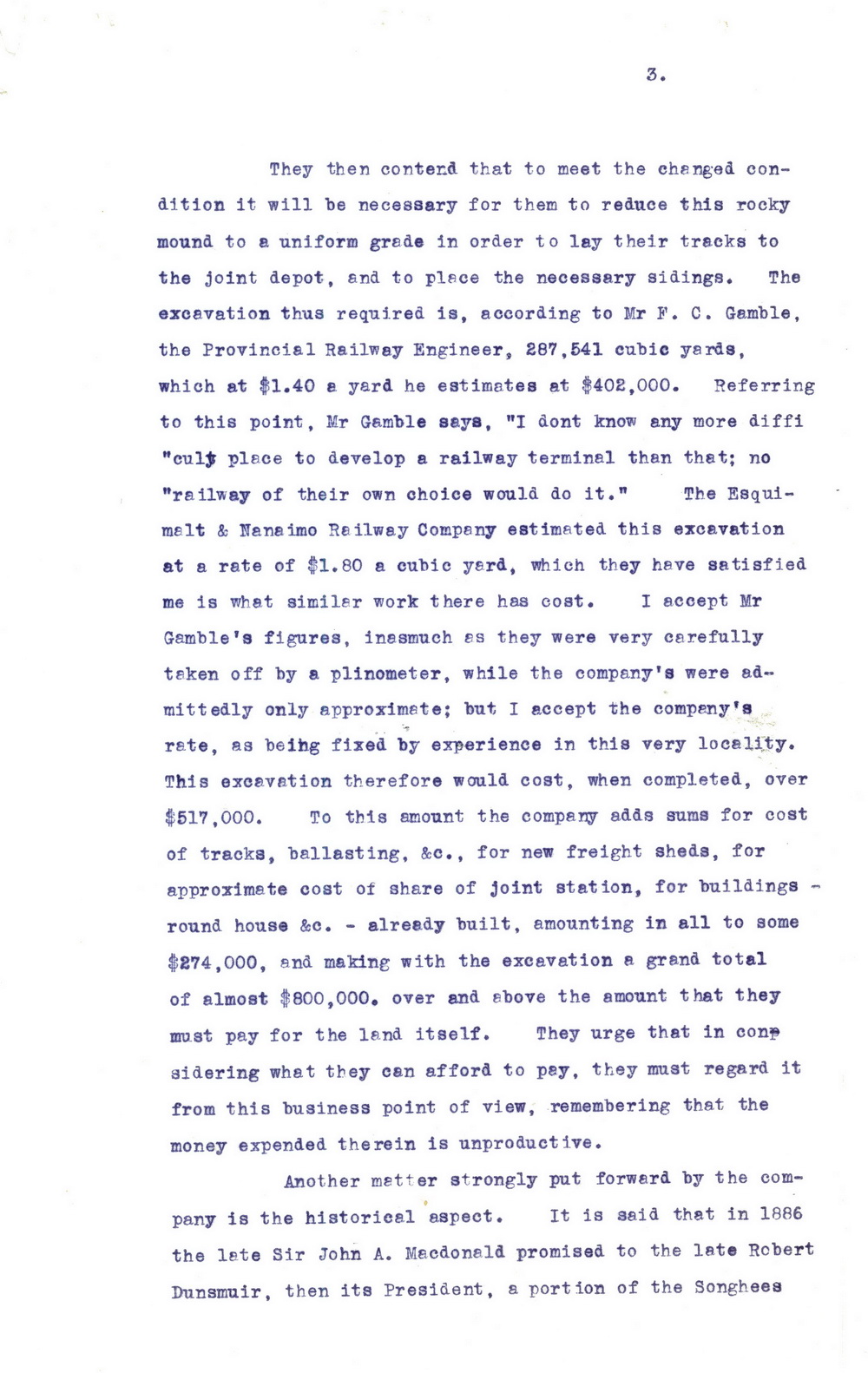 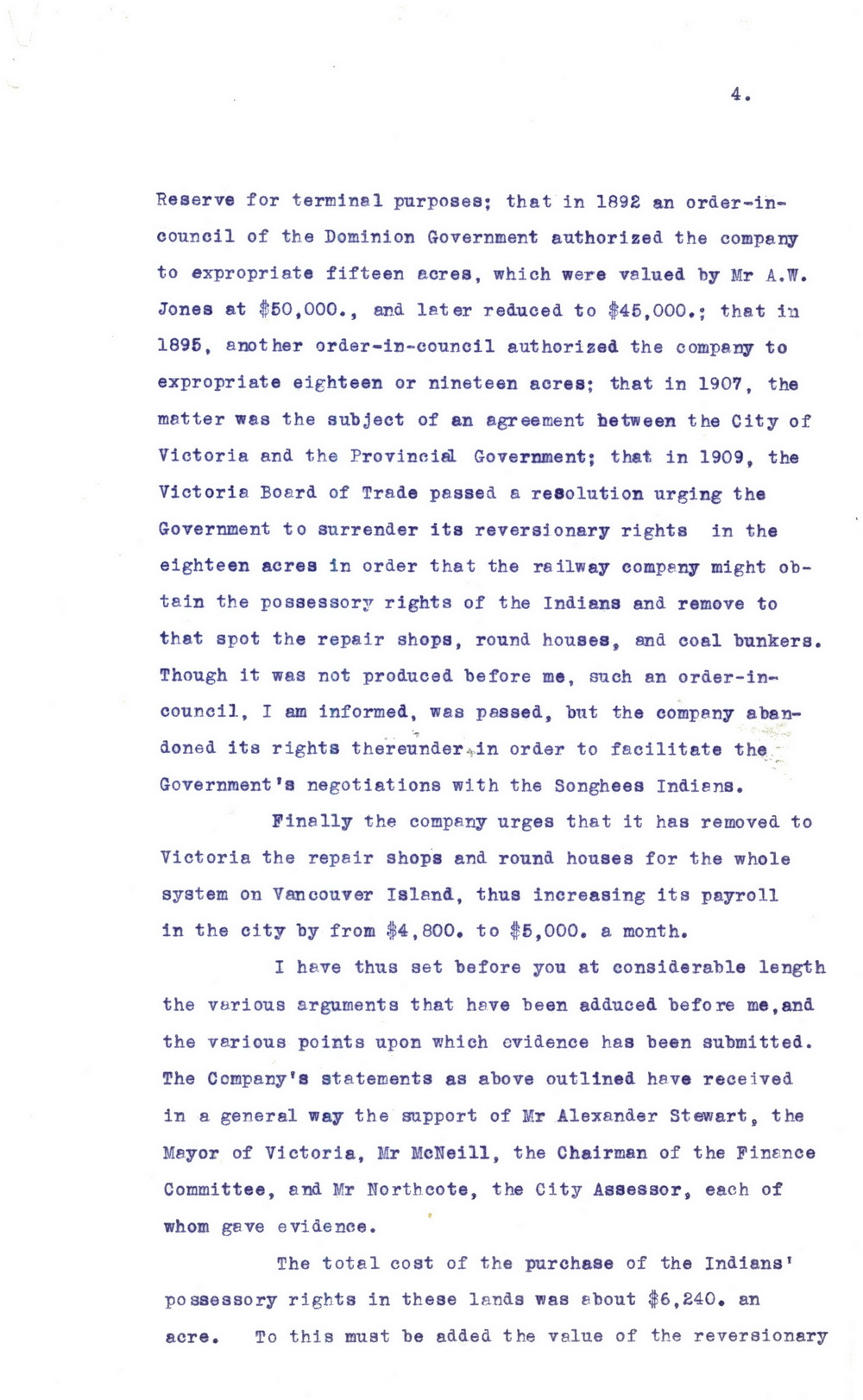 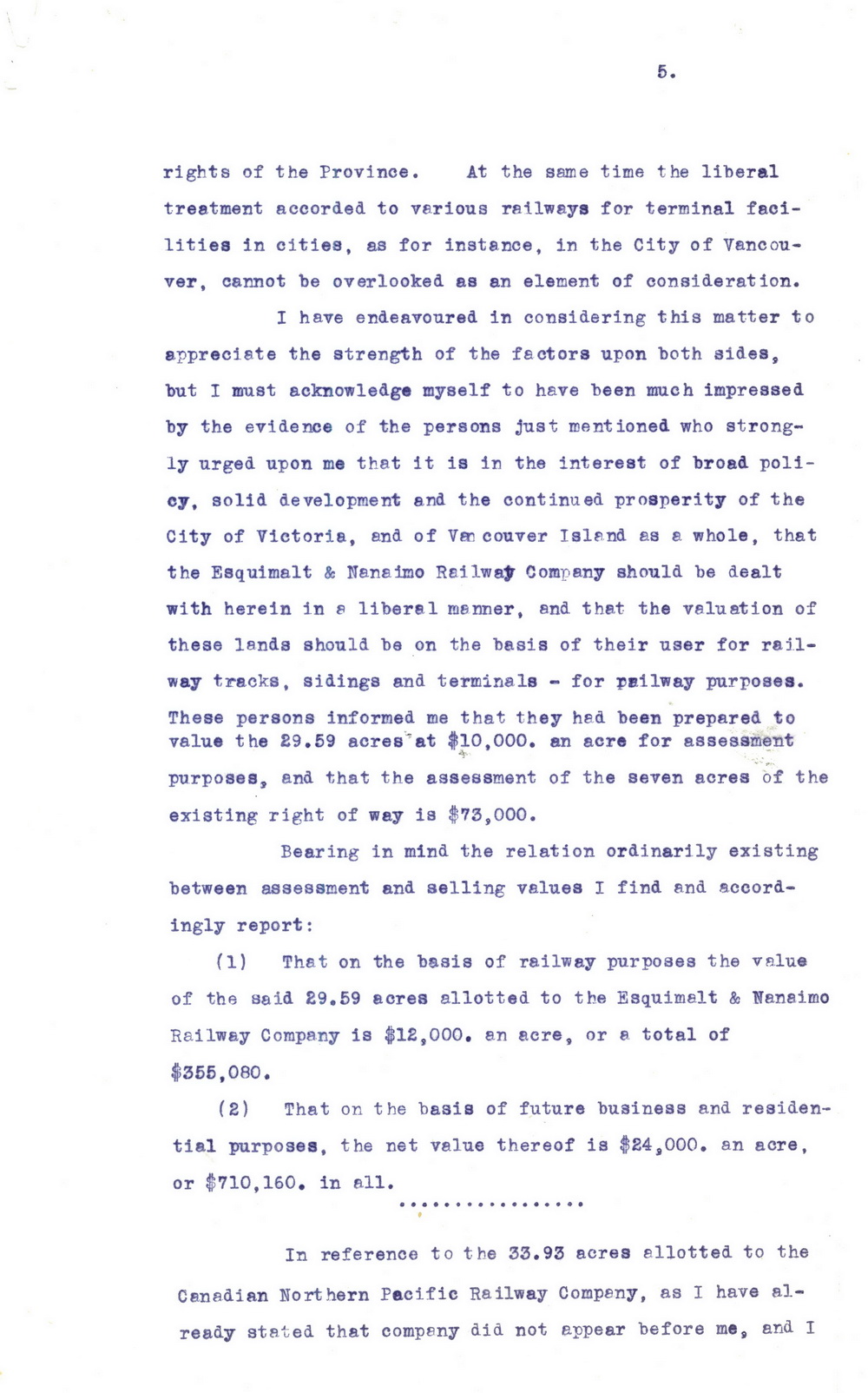 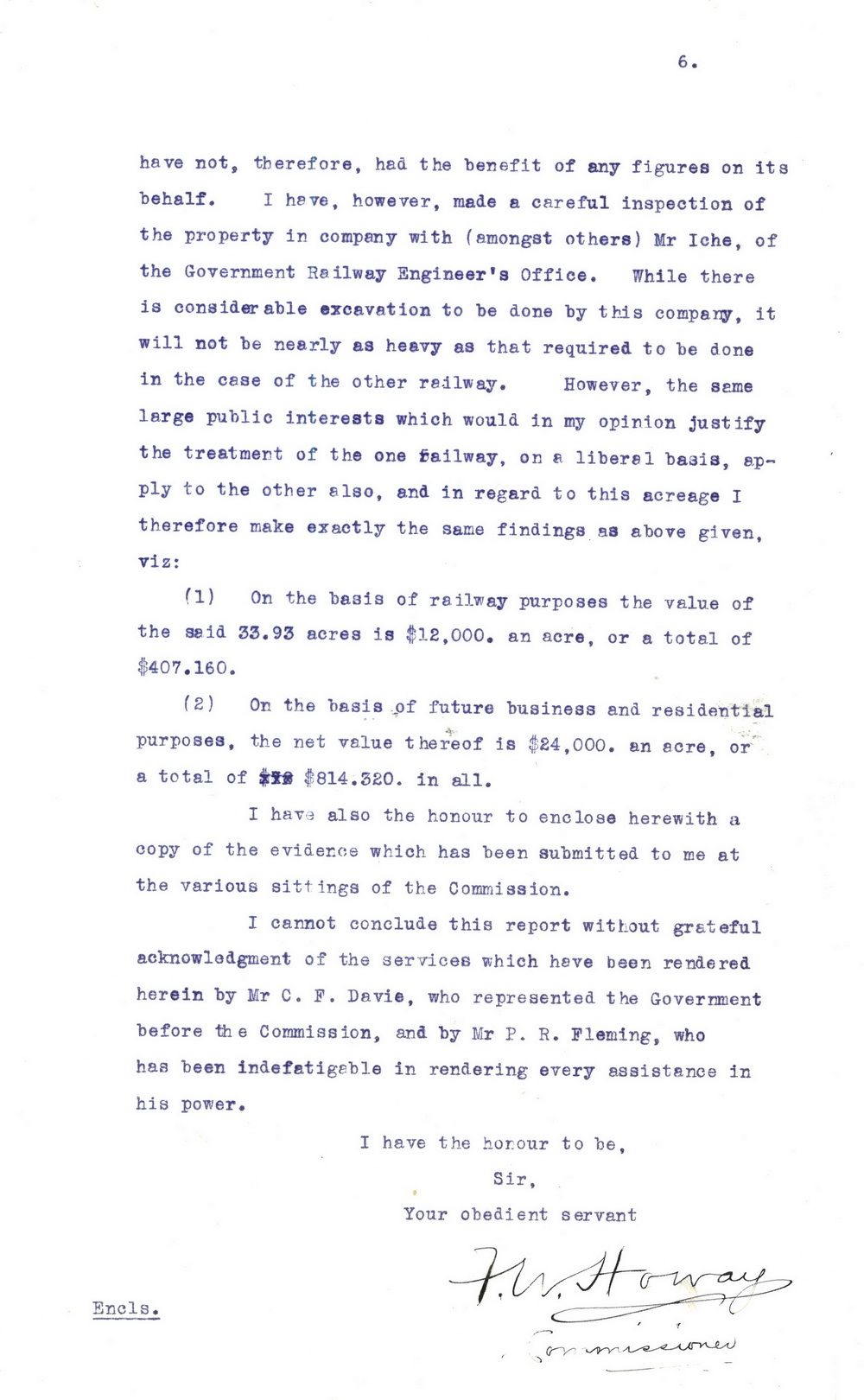