the 30th of 32 views- Scientists Big and Small

This week, we welcome guest blogger Courtney Johnstone.  We are lucky to have Courtney in our Learning Department for three weeks as part of her Practicum for her UBC Education degree.

The blog is all yours Courtney…

What is a vertebrate, you ask? Well, this afternoon our Kids’ Club learned quite a lot about this mysterious term. A vertebrate is an animal that has a spine. We humans are technically termed as a vertebrate, since we have a spine to hold us upright! There are many different kinds of creatures that we would also call vertebrates, including fish – the topic of today’s exploration. Lucky for us, our museum has quite the fish-y expert on hand to help answer all of our vertebrate questions.

Dr. Gavin Hanke is the Curator of Vertebrate Zoology at the Royal BC Museum and also happens to be a fountain of knowledge of just about anything fish related. He’s also the guy you need to call whenever you find any rare and unusal species around the province (meaning ones that are really not supposed to be in B.C.)

Before the Kids’ Club started their journey to the Vertebrate Lab, we had a discussion about all things fish related. We started off asking if anyone knew what a vertebrate was (a few did!) and then discussed different kinds of vertebrates that might be found in the ocean (dolphins, whales and fish to name a few.) We also practiced our ‘fish faces’ before going off to meet the real deal. 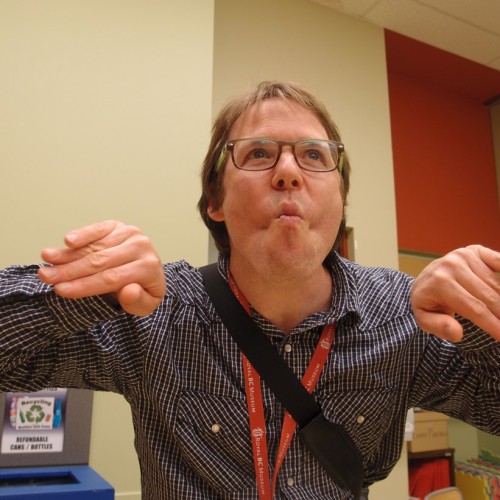 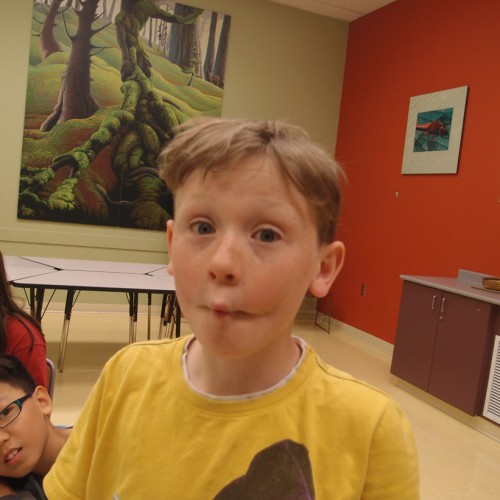 When we arrived at the lab, we were greeted by Dr. Hanke  and a real live vertebrate specimen, his daughter Anna!

She wowed us with her extensive knowledge of animal sounds, including a Darth Vader impersonation! (Her father is quite the Star Wars enthusiast, as it turns out.) 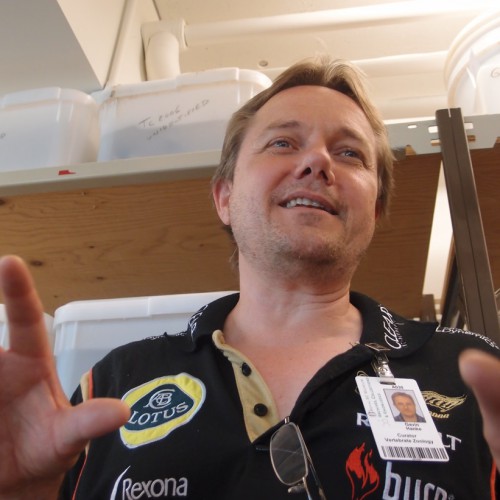 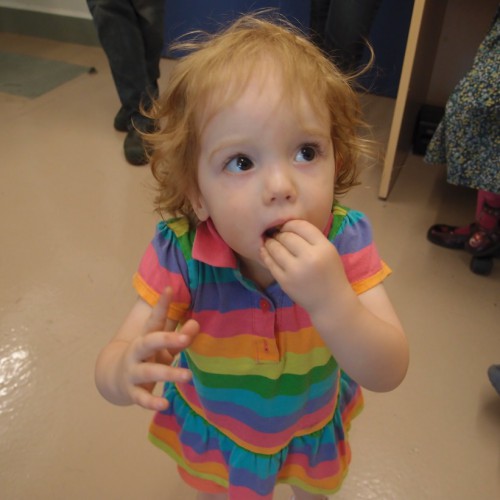 In addition to building models and collecting Star Wars memorabilia, Dr. Hanke also spends quite a bit of time illustrating different kinds of fish, which are to eventually be compiled into a scientfic book. Quite impressive! 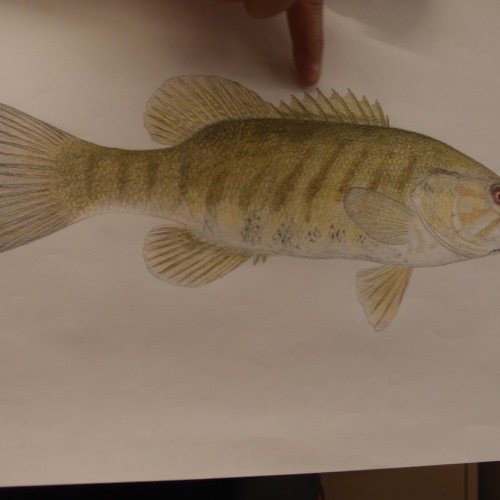 There were many interesting vertebrate specimens within the lab, all with their own particular ‘offical’ name and ‘plain English’ name. Dr. Hanke explained the process that all scientists must go through before a name can be official – did you know that you can’t name one after yourself? It also must be completely translated into Greek or Latin, which is why species names are always so long and complicated. Dr. Hanke has actually named 13 vertebrates, himself!

This one below has an especially interesting name that all of our Kids’ Club enjoyed – the Acanthonus armatus also known as the “Bony-eared Assfish.” (Yes, really!) 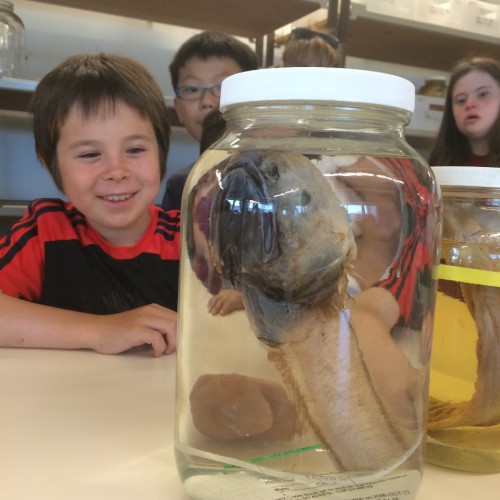 Up close and personal with the Acanthonus armatus 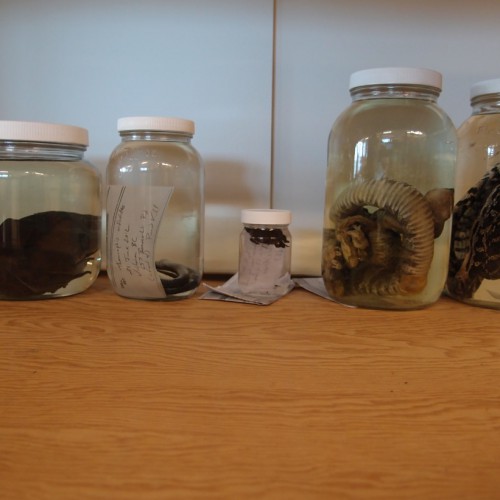 A few interesting vertebrate specimens from our lab visit

Remember how I mentioned that Dr. Hanke is the one to call if you find anything weird and unusual around B.C? Lucky for us there was one of these ‘weird and unusual’ specimins in the lab! This one here is called a Snake Head Fish, and it is originally from Asia. It was found in a small lake in Burnaby, B.C. and they had to drain half of the water out of the lake before they could catch it. Dr. Hanke believes that it was most likely brought over to be sold at a food market but somehow landed up in the lake instead of someone’s dinner. Oops! 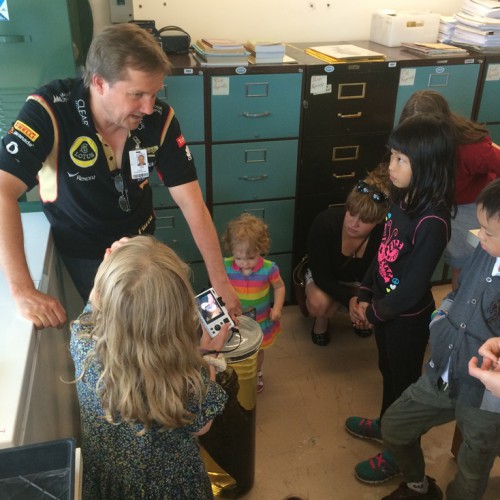 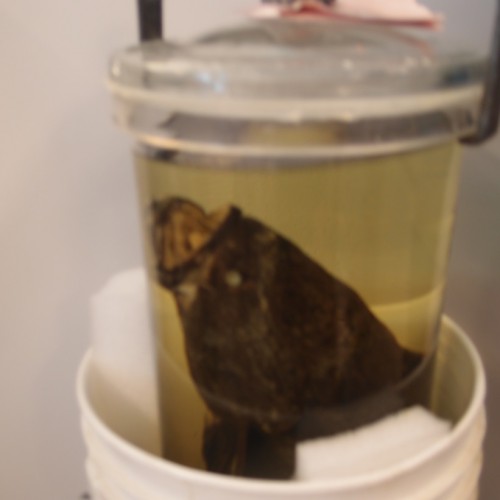 Next, the Kids’ Club was shown some fish scales that had originally been found in seal scat (technical term for poo!) Dr. Hanke thinks the scales come from a Northern Pike Fish, which is usually not seen in the area that the scat was found, meaning that the fish has extended its habitat range. This could have some interesting implications for the rest of the ecosystem. Hmm… 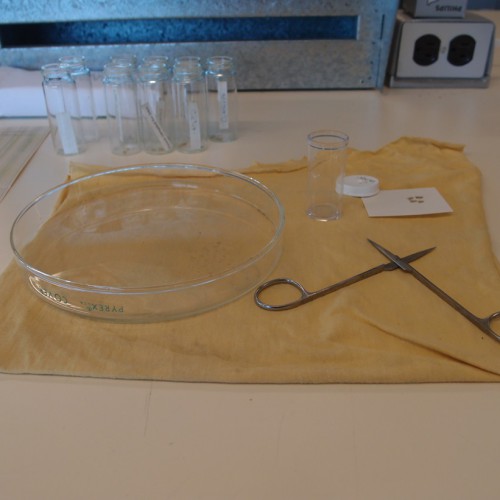 To finish up, we asked Dr. Hanke what the strangest animal he’s ever been called to pick up. He answered that it would have to be the Flowerhorn Fish, which is only ever found in pet shops, as it is a human-bred species that is made up of five different fish! Apparently these fish cost upwards of $500 to buy, so it was quite a strange thing to see it dumped in a Kelowna pond. Weird.

The Kids’ Club would like to give a BIG thank you to Dr. Hanke for opening up the Vertebrate Lab today and for answering all of our questions!

Next week our other UBC Practicum student, Cayce Foster. will be the guest blogger. as we explore the world of Invertebrates.  Any guess what that might mean? 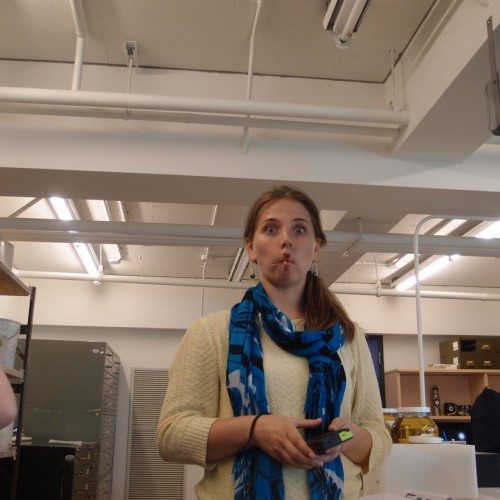