During the spring of 2014, Canadian news was dominated by reports on the ever-expanding blue whale carcasses in Newfoundland. I was patiently waiting for the prize video showing the catastrophic rupture of one of the carcasses (standing on a bloated carcass is not recommended). There are you-tube videos showing rotting Sperm Whales which “popped” while being cut open – now scale that up to a Blue Whale.

At the same time the east coast whales were getting such intense media coverage, a Blue Whale was decomposing here on the shores of Banks Island. Since our specimen was so remote, few heard about it. The remains were first spotted in December 2013, and by then, the body had separated from the head and washed back out to sea.

And the hagfish rejoiced. Hagfish latch on to rotten flesh and tear out chunks. A sunken whale carcass must be the hagfish equivalent of an all-you-can-eat buffet. I don’t envy them though – that’s a lot of blubber – I don’t even eat the “pork” (i.e., glob of fat) in a can of Pork and Beans.

John Ford from DFO in Nanaimo confirmed the identity of the specimen from skull anatomy and its size (5.4 m long by 2.4 meters wide). 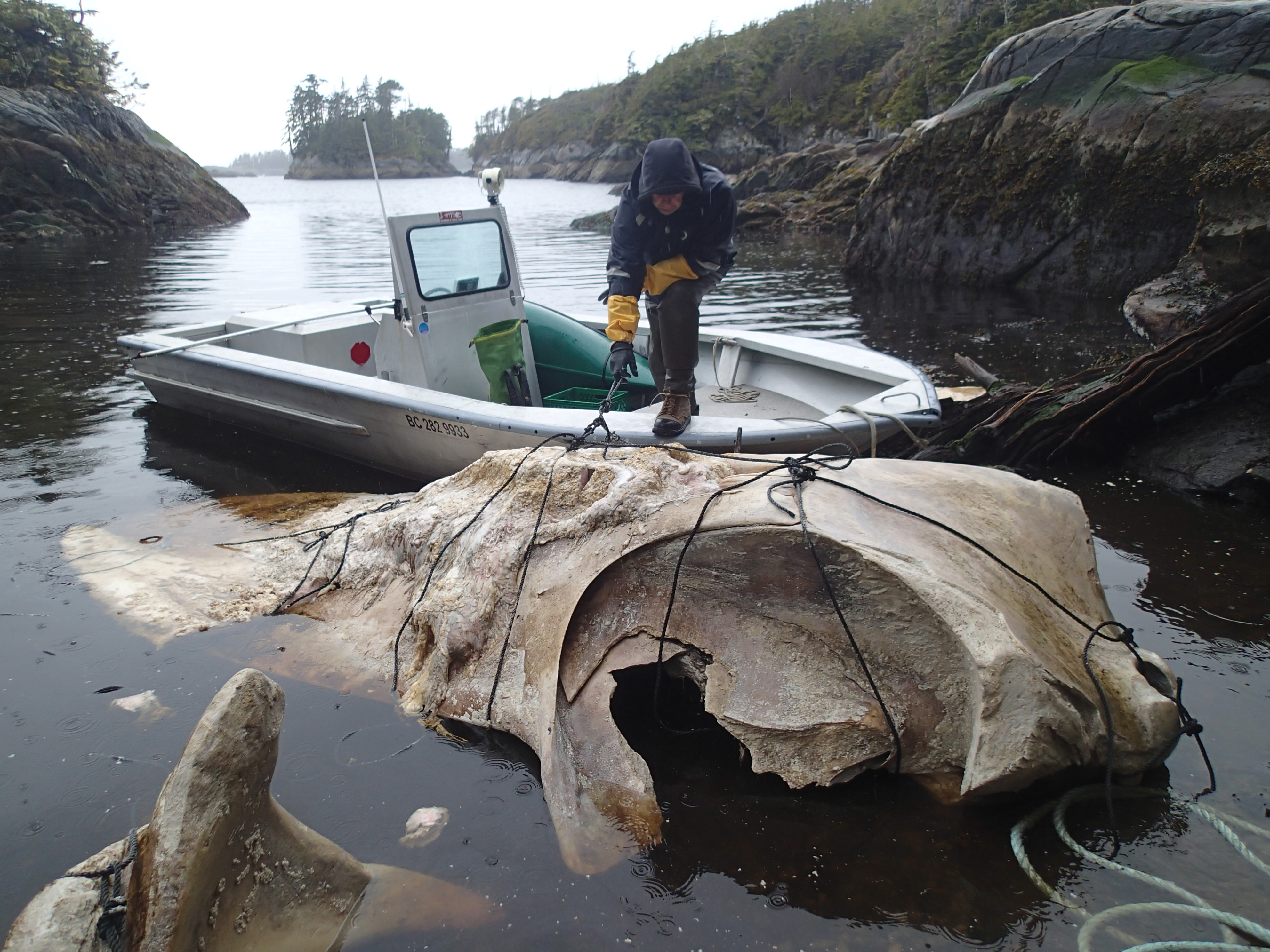 Obviously the Royal BC Museum wants another Blue Whale specimen – and if the body washed away, we’ll take what we can get – the skull, a one of the dentary bones, some baleen, and a rib. Our first specimen consists only of a pair of dentary bones and they are stored off-site because of their size. 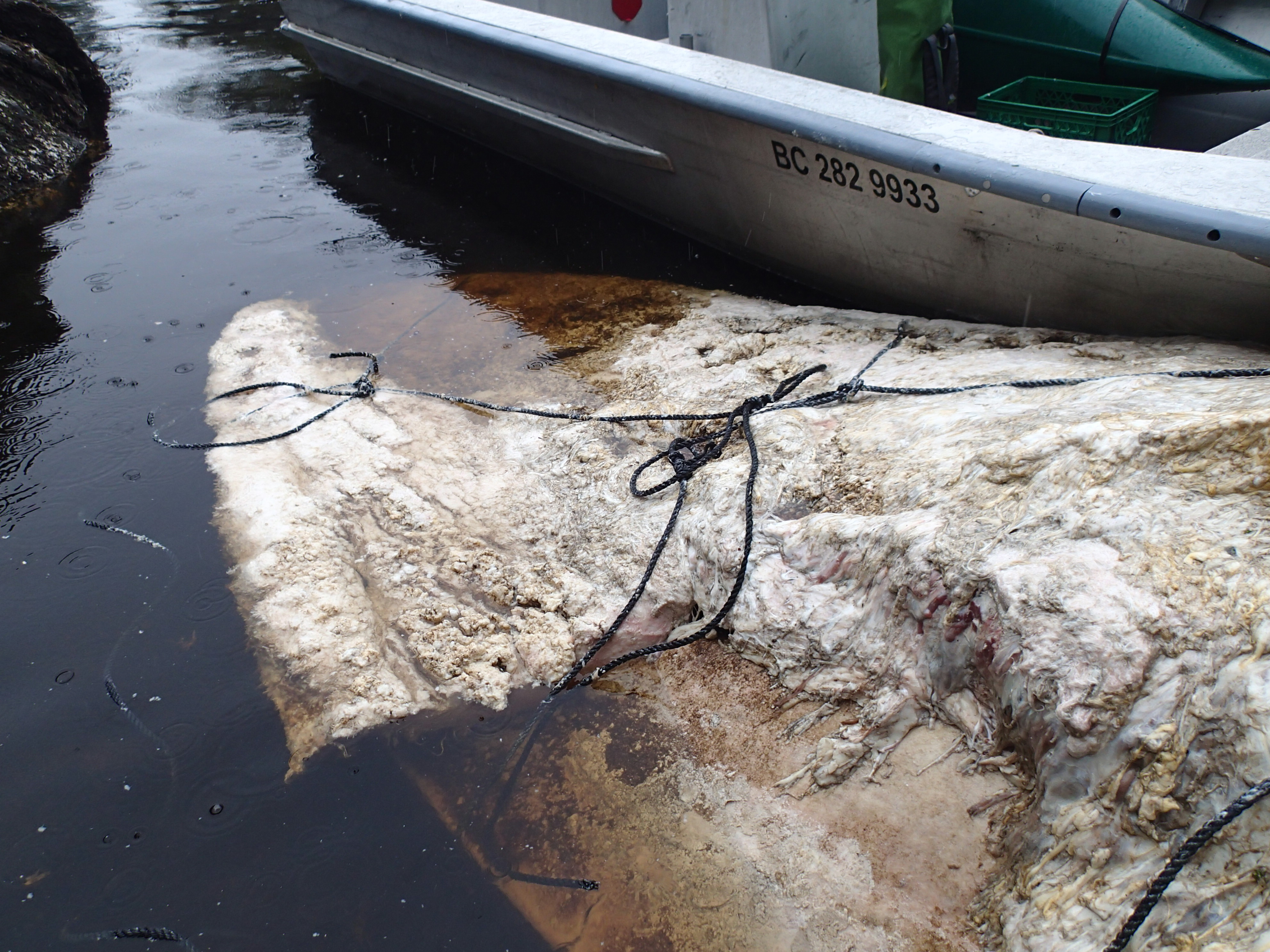 The remains on Banks Island still have some rotten flesh attached, and so the skull and the remaining parts were wrapped in a net and floated in a small inlet to allow nature time to clean the bones. The net and floats were tied to shore at several points to avoid skull contact with shore and any additional damage from wave action. 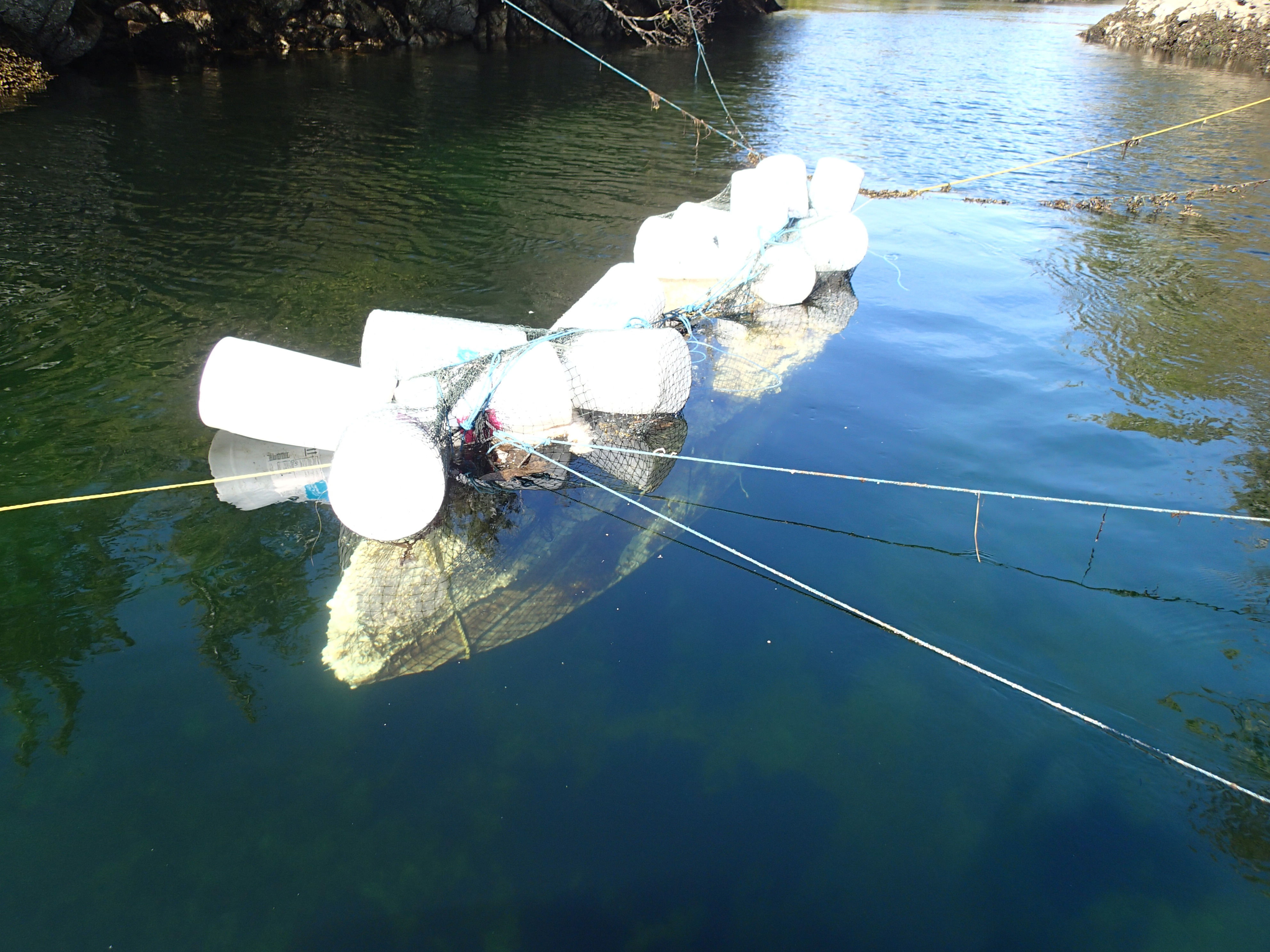 The crew from Cetacea will recover the skull and the few remaining bones at the end of June, load it in a Herring Skiff, and then tow it south for final cleaning and degreasing. This obviously is not the first Blue Whale they have prepared – but this one did present a challenge given its remote location. Stay tuned for updates.

And now to run off to deal with another new specimen. A cougar which was shot this morning (June 2nd) out in Langford. In the museum world, you never know what each day will bring.

[Note Added June 27th, 2014 – I received a call from the Cetacea crew on the 26th of June – the Herring Skiff containing the Blue Whale skull flipped in unexpected rough weather off Banks Island. The whale’s jaw and rib were aboard the vessel towing the skiff, so it is not a complete loss, but the skull was last seen heading south while the crew fought to right  the upturned skiff. No one was hurt fortunately, and maybe someday the skull will turn up on our shores again. It is wrapped in netting with plastic buckets for floatation – and there are RBCM tags attached to the netting – so it will be hard to mistake should someone come across it.]