A class-mate in kindergarten gave me an Eastern Garter Snake (Thamnophis sirtalis2) – my first of many pet herpetiles. That did not thrill my parents – and the story of that snake getting loose in our car, and the mayhem that followed still is a family favourite. My parents told me to release the snake – but in trade, they bought me a hatchling Red-eared Slider (Trachemys scripta elegans). It lived for a short while in one of those plastic trays with a palm tree (yes they are still available), but my Dad eventually bought a 38 liter aquarium. The turtle died when we moved from Niagara Falls to Winnipeg, November 1973. The turtle’s aquarium travelled in the unheated freight compartment of the train (I was 6, what did I know about turtle metabolism). My parents also knew nothing about shipping turtles in winter – I guess they assumed he’d hibernate. We set up the turtle’s aquarium in our new house and he sat there for days – in exactly the same spot – until my parents convinced me it had died.

Obviously the central Canadian winter is inhospitable to turtles from the southern Mississippi River basin. In contrast, the climate here in south western British Columbia allows many species to get a toe-hold or take root – including many species regularly imported by pet shops. The trade in exotic reptiles and amphibians continues to grow in North America, and turtles have been particularly popular. The demand for turtles remains high, but in many cases, owner interest wanes as pets grow and these animals get abandoned. Female turtles tend to be dumped more frequently than males, because females achieve a larger size and require larger aquaria.

In the last few years I have seen the following species in pet shops here in Victoria:

You can see why people like Florida Softshells – hatchlings are cute with their Gonzo-muppet nose, but they grow large… and have a belligerent manner. To me the bite of a Softshell Turtle is worse than that of a Snapping Turtle.

BC’s freshwater turtles include the Pacific Pond Turtle (now EXTIRPATED in BC, but survives in the United States), and the Western Painted Turtle. As far as exotic species in British Columbia, in 2012 alone I heard of a Diamondback Terrapin, a Midland Painted Turtle, a River Cooter, Reeve’s Turtle, and a Spiny Softshell Turtle here in the southwest – and these were in addition to Yellowbelly Sliders and Red-eared Sliders that already survive here. Red-eared Sliders even try to nest here – but our summers are too short and eggs do not hatch (so far). Adding old records of European Pond Turtle and Snapping Turtles to the list for 2012, we have had 8 species of exotic turtle released in this province, compared to 1 native turtle still existing here – and 1 extirpated species. There is even debate whether the Pacific Pond Turtle itself had been introduced here from populations to the south. 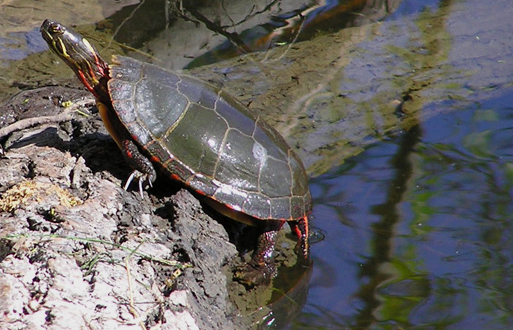 A Midland Painted Turtle (Chrysemys picta marginata), in Ontario photographed by C. Hermus. While this is a Painted Turtle, it is a subspecies from elsewhere and should never be released here. 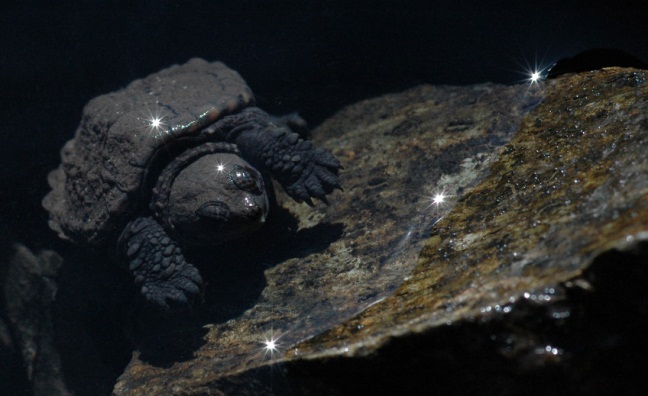 Snapping Turtle hatchlings are cute (above, photo by B. Thorsteinson), but they grow and make lousy pets as adults. The adult below (RBCM 1937, the lens cap is 5.9 cm in diameter) was found along Fuller Lake Road, in Chemainus.

Exotic turtles are here because a small proportion of people abandon their pets. People also put turtles in garden ponds. You can yell “Stay” until you are blue in the face, but don’t expect turtles to listen. If you want obedience, get a Black Lab. Turtles will crawl out of a pond any chance they can.

You may be thinking, “Why is this a problem, turtles are cute?” 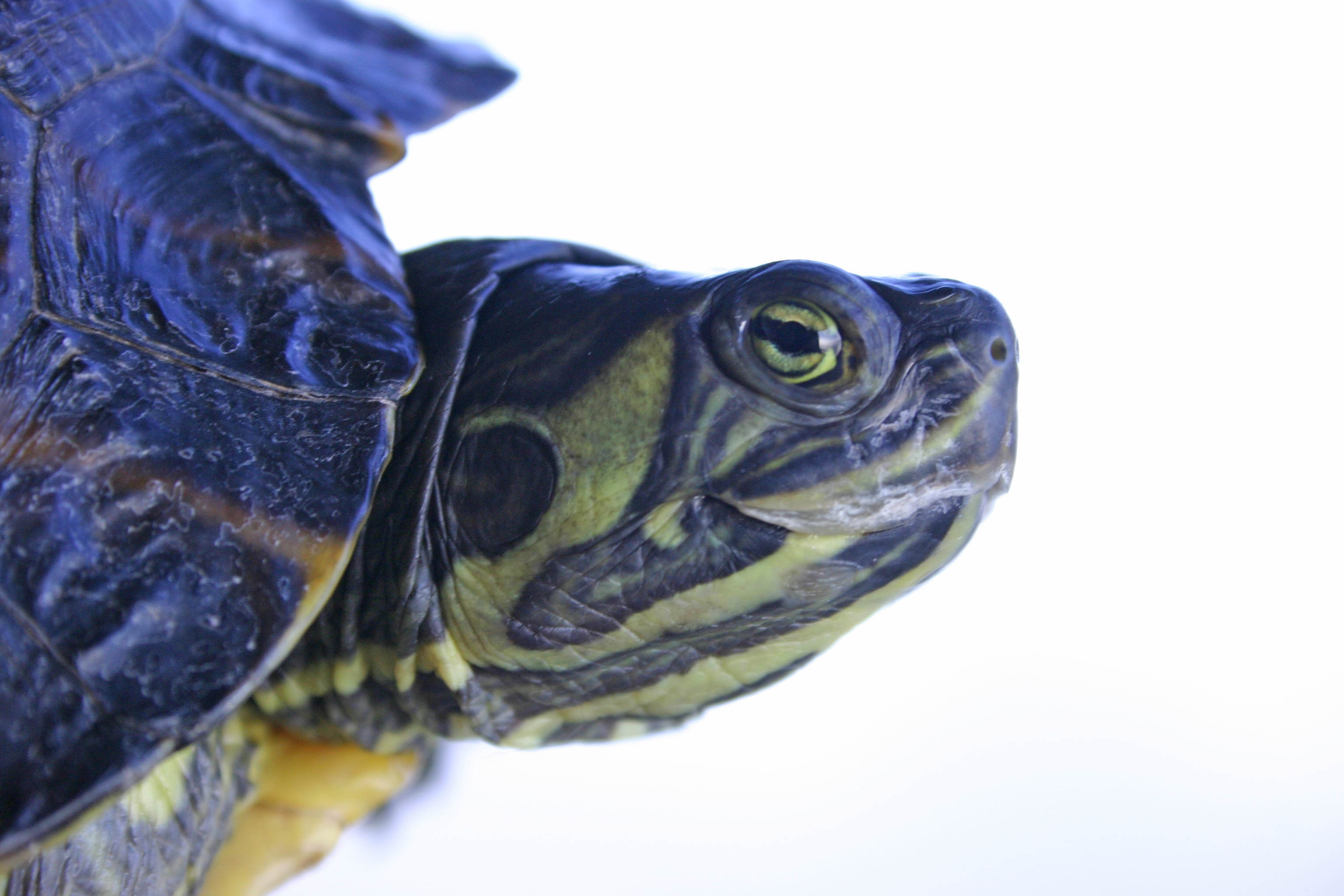 That sentiment is the problem. People buy turtles because they are cute, but consider the long term responsibility. Turtles grow large, their tanks get smelly (especially if you go get an inadequate filter), and they can be a 20+ year commitment. I have had Huxley – one of my Box Turtles since 1984. Huxley roamed around our house until our daughter Anna was born. After a bit of debate, we concluded that even though Huxley was less messy, it was more socially acceptable to put Huxley in a cage and let Anna roam free. 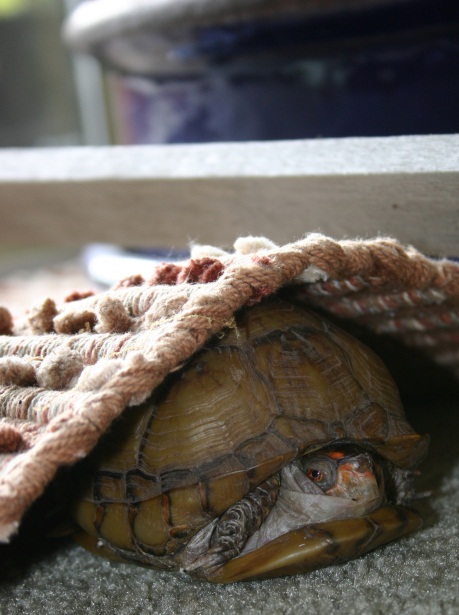 Huxley and her favourite hiding spot.

Abandoned exotic turtles compete for the same basking sites and food as local Painted Turtles. They may even compete to nest in the same areas, regardless of whether Red-ear nests are successful. Beyond this, think of the impact of these exotic predators over their lifetime. Turtles consume aquatic snails, insect larvae, amphibians fishes, and aquatic plants, and while it may seem negligible to us, but the real impacts of pet turtles could be far-reaching. I’d be far happier with healthy dragonfly populations than lakes full of abandoned turtles – you can bet that turtles are a significant source of mortality for dragonfly larvae. If you still think the release of a few exotic pets is harmless, look up the word Batrachochytrium. Frogs transported around the world have spread this disease – and yes this disease has reached British Columbia (Deguise and Richardson 2009). I suppose we will just wait to see what turtles will spread to local waterways.

It is illegal to release pets or other exotic animals (see sections 76 and 77 of BC’s Wildlife Act), and consider also that many dumped pets die a slow death due to malnutrition or cold. Section 76 of the Wildlife Act states that if you dump a pet, it becomes Government Property. Don’t say I didn’t warn you: if you abandon a turtle, researchers and wildlife officials can catch and kill your pet. Moreover, all exotic turtles, not just snapping turtles, now are listed under Schedule C of the Wildlife Act and can be captured and destroyed without a permit.

Even though the law is on my side and abandoned turtles are unwanted additions to BC’s ecology, people will yell at me when I try to remove these animals from lakes and ponds. Turtles have certain “cute” factor in their favour, and so anyone removing exotic turtles will have an uphill battle against public perception.

Call me cold hearted, but abandoned pets don’t belong here and should be removed. It is one thing to grow tomatoes for food (they won’t persist without our help), but another thing altogether to abandon a pet when its care becomes onerous. People come here to enjoy the unique beauty of the Pacific Northwest – not stampeding packs of feral tortoises. If I catch an abandoned pet turtle in the wild, it likely will end up in the museum’s research collection, as did the abandoned female Yellowbelly Slider (RBCM 1955) I caught in Beacon Hill Park. This specimen now is a permanent record of Trachemys scripta2 in British Columbia and a record of pets abandoned by popular demand. I don’t mind people having pets. I certainly have had my fair share. But if you don’t want your pet anymore – find it a new home or euthanize it humanely.