For the last few years, we’ve been putting objects and sounds into the displays and dioramas of the galleries that don’t exactly fit.  And asking visitors to see if they can find those things.  And the person behind this project is none other than Kate Kerr.  It seemed like a good day to pay her a visit.

But first we did some foolish posing. 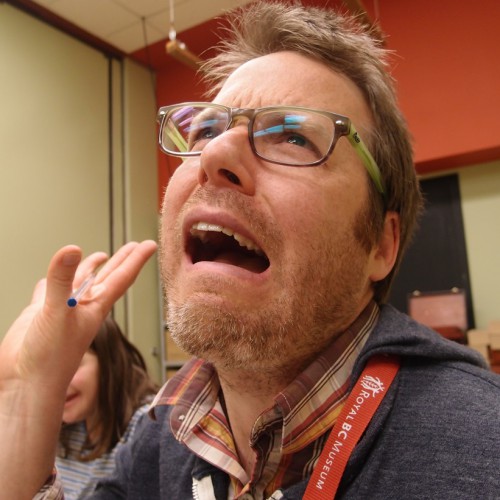 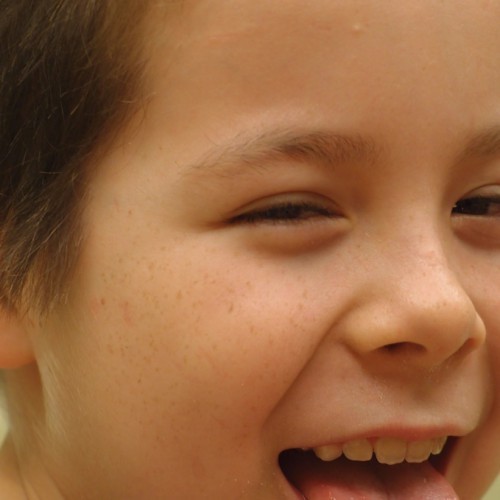 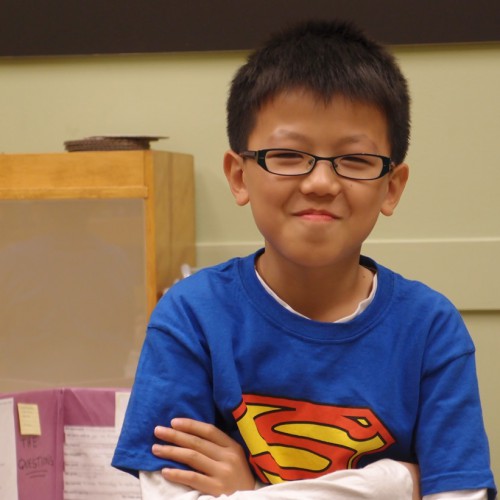 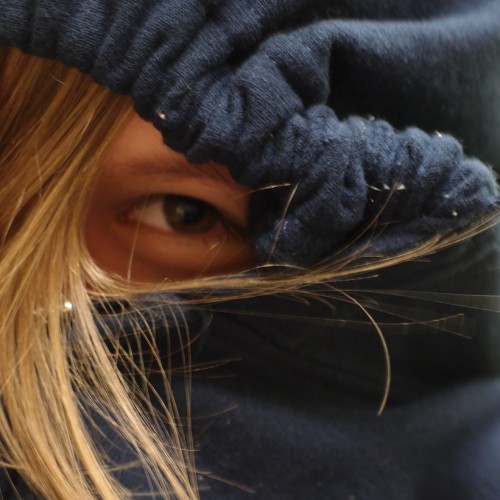 Kate works in the exhibit arts area.  We call this the EATS studio, and they get to make a lot of really fun and creative things down here. 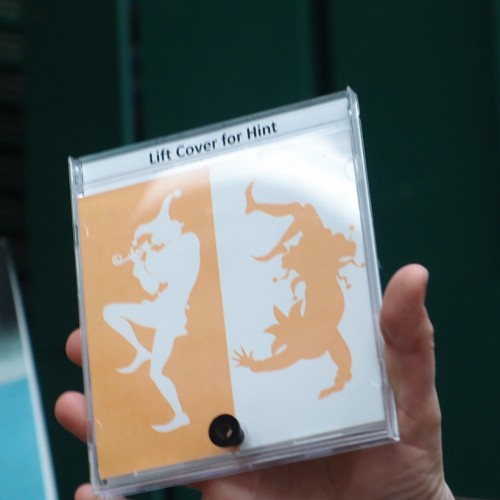 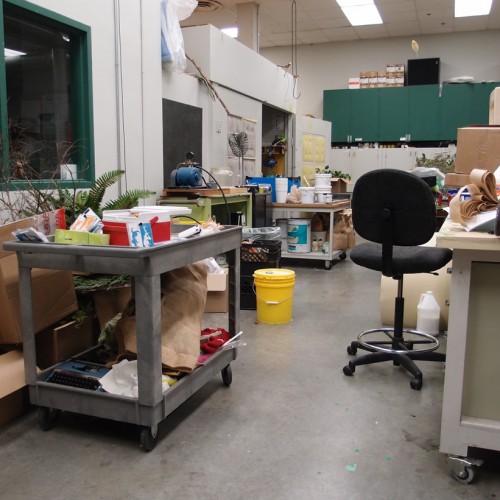 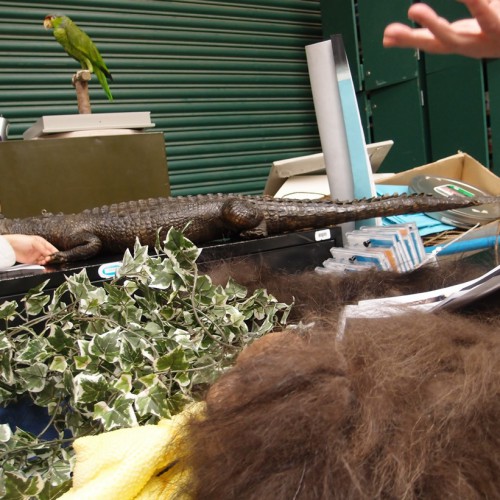 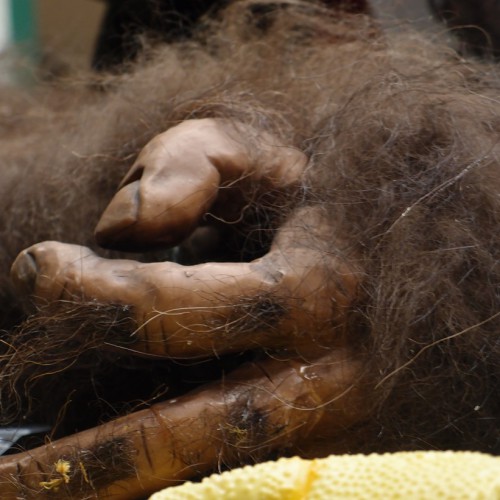 Those are Kate’s fingers holding onto a CD case.  Those CD cases were all over the museum, giving visitors some clues to what they might discover.  This year Kate had a family category of finds, and then a master level as well.  The master level were objects that we more subtle.  For instance, in the pharmacy there was a bottle that showed it was a vaccine for Polio.  It looked like it belonged, but the Polio vaccine was created in the middle of the 20th century, by Dr. Jonas Salk.  The clue said something like ‘Don’t Salk’, which you had to know a little about the vaccine and it’s history to make that connection.  And since Old Town is supposed to represent 100 years ago, the vaccine wouldn’t have been invented yet.  Tricky.

Needless to say, the Big Foot arm was easier to spot.  It was reaching up over the rocks in the fur trade gallery area.  Big Foot, and a mounted parrot, have made repeat appearances over the years.  Kate had some rubber chickens this year that she thinks might appear again as well.

While down in the EATS studio, Kate showed us some of the things they are working on.  The photo below is part of some researching Kate is doing about fabric for seats in the Our Living Languages exhibition that open in June.  The other photo is of an interactive that will be part of that exhibition as well.  When the interactive is complete, we won’t see the gears (bicycle chains actually).  It’s fun to see all the stages of development. 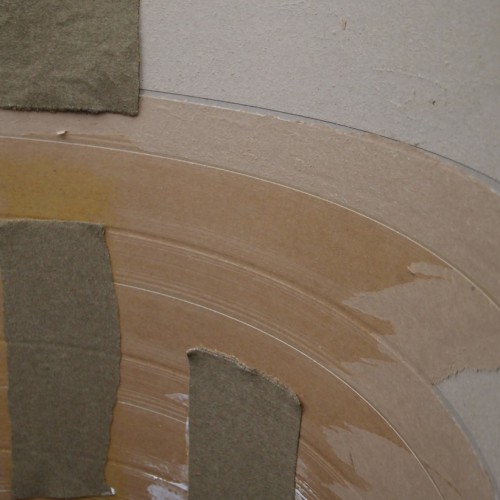 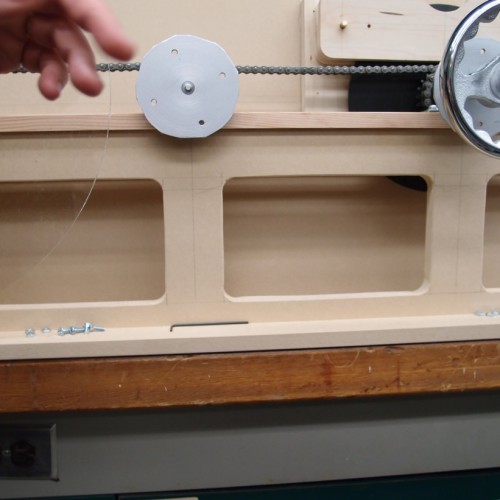 Then it was up to the gallery.  In the morning Kate had taken down most of the April Fools objects.  But she kept up a few for Kids’ Club.  First it was to the Parlour in Old Town.  We went looking to see what was off.  One of the Kids’ Club kids had already done the tour, so we asked her not to give it away.

The other kids looked closely.  Everything they guessed was actually part of the display.  Funny how we don’t recognize certain things until we really look closely.  I gave them a clue that it was a picture.  They finally got it.  It was a family portrait of Prince William, Duchess Catherine, and Baby George.  The give away was that it was a colour photo.

I asked Kate if she could go into the Parlour and take down the photo.  She said yes, but needed to go into a room on the other end of Old Town, and then crawl through a tunnel of sorts, and eventually we saw her pop out in the Parlour…like magic.  The crawl space is partially under the stairs, so when she went by she knocked.  The kids then knocked back. 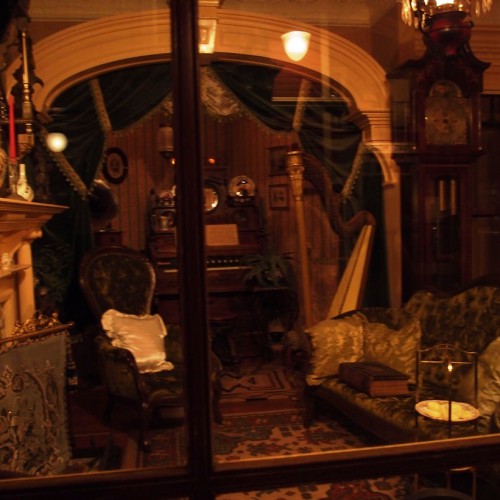 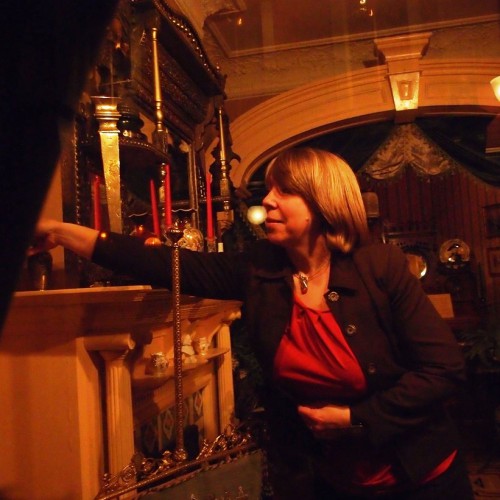 Is it over here? 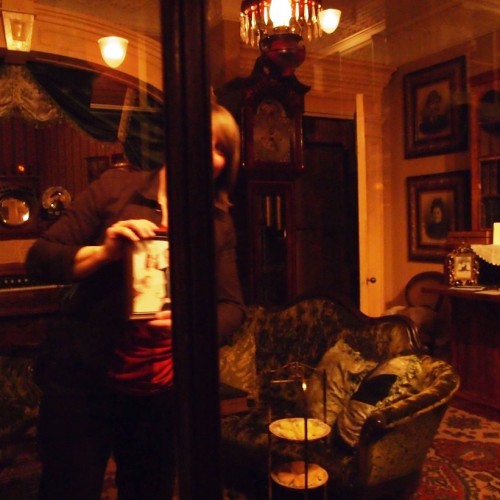 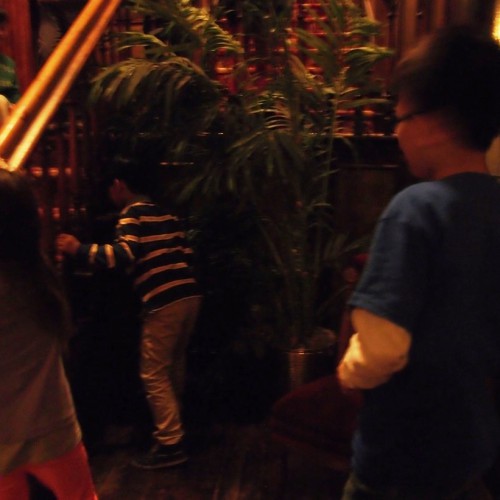 Sounds under the stairs

Then it was onto the Train Station.  Kate mentioned that the trick for this year is that it was so obvious.  She had a modern cat carrier on the luggage trunk.  But she said that people would tend to go to the ticket room and look in and try to find a small change to what was there.

She also told us what she is thinking for next year in the train station…but I’m not telling.

Kate then took us to the Cannery.  The salmon had wedges of lemon and parsley on them.  Funny! 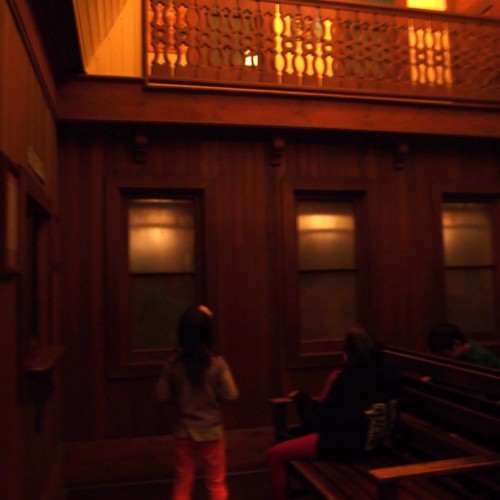 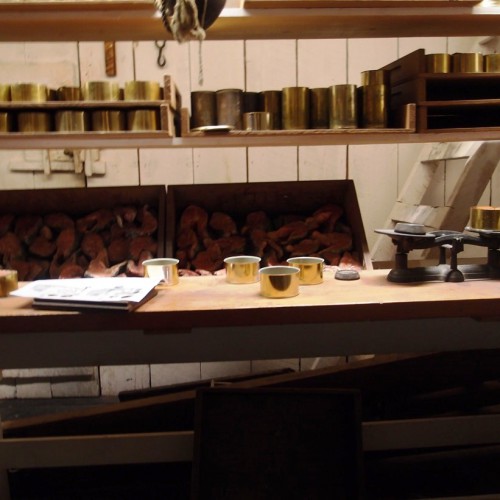 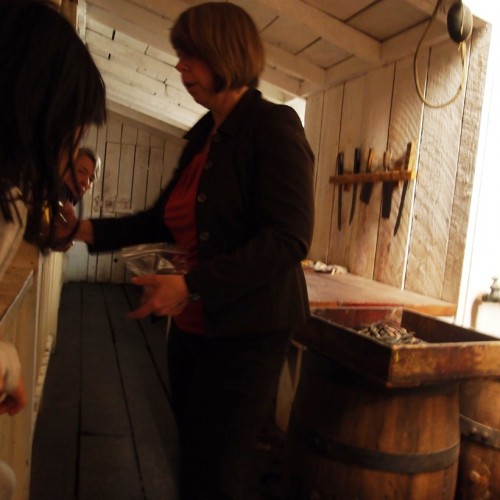 Then Kate went through a secret passage while we raced around to the mine.  We looked down and saw Kate in the mine!  She told us about the bag of coal that she had in that area, and showed us some of the everyday tricks the museum plays, like a mirror in the mine to make the tunnel look like it goes further than it actually does.

She also showed, and let us smell, some of the oils that get pumped through certain display areas.  We were able to smell rotting fish.  Yuck…and so cool.

That smell is used in the Cannery, and also by the ship.  Kate showed us the place where they hide the little pot that steams the oils, and lets off the smell. 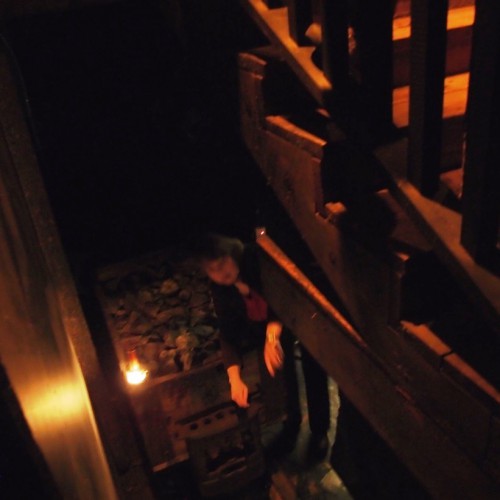 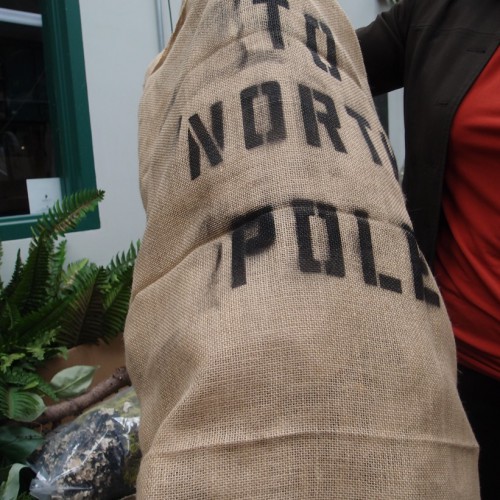 Before leaving, we passed by the Our Living Languages exhibition that is being built.  Kate showed us where the interactive station will be (remember the bike chains) and where the seats will be that she is working on.  She also showed us a plan of the space. 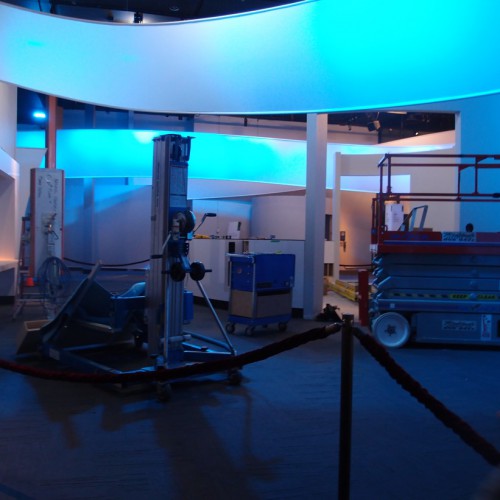 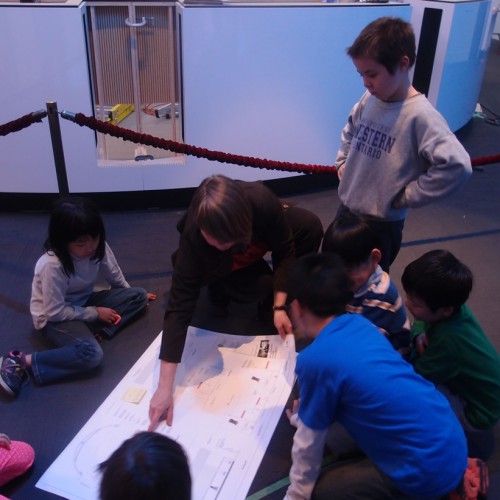