In the museum world, specimens with no data are a huge waste. They take up space, but we get no bang for our budget. When I select a museum specimen from the collection, I expect it to have some level of associated data so the specimen is useful for research. Some specimens do not live up to this expectation and have little use, except perhaps as expendable items in public programming or on exhibit. Museums around the world are pinched for collection space and funding, and we have to be careful how we collect and what we keep, to avoid squandering museum resources on mere curiosities – like these hummingbirds from Rio. 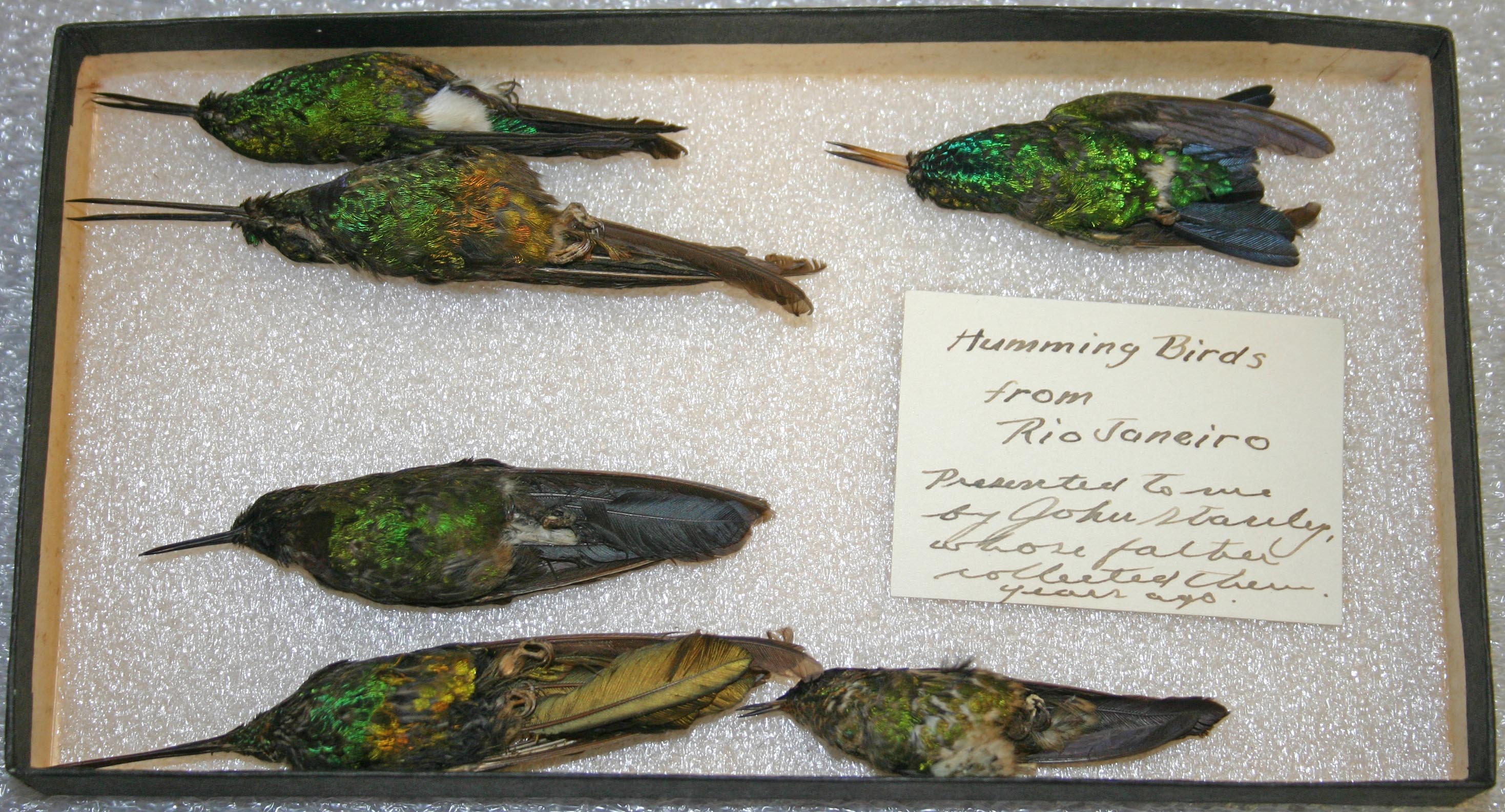 Here at the Royal BC Museum (RBCM) we still have specimens which are hold-overs from a time when this facility had plenty of room in collections areas. The Platypus (Ornithorhynchus anatinus) and Shingleback Skink (Tiliqua rugosa), and this Sawfish (Pristis sp.) rostrum fortunately were in the education collection not the research collection. 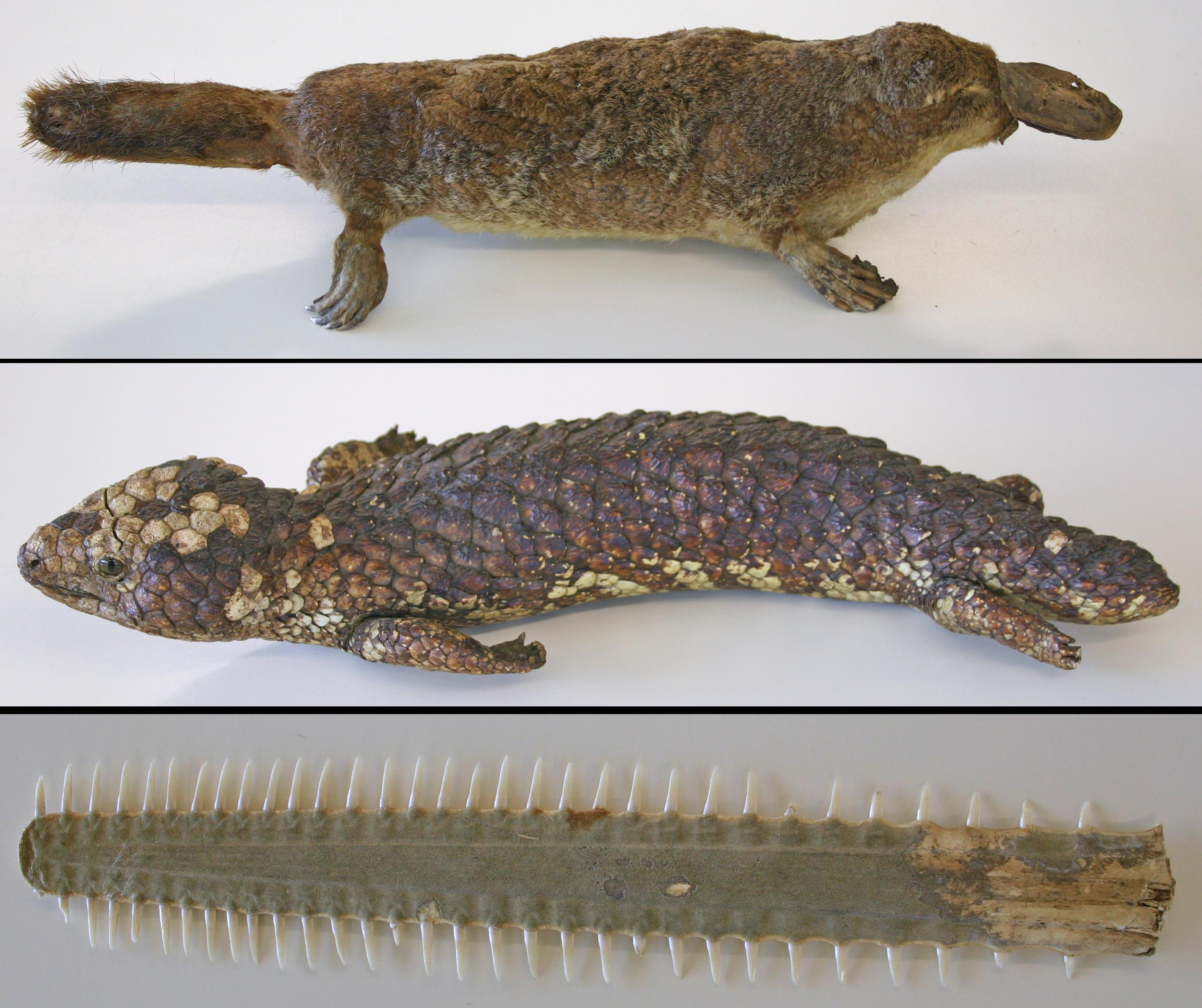 The research collection should remain focused on British Columbia and neighbouring provinces and states. Historically, curators and collection managers kept almost anything – like these finches (below) which likely were someone’s pets and had not been found in the wild in BC. 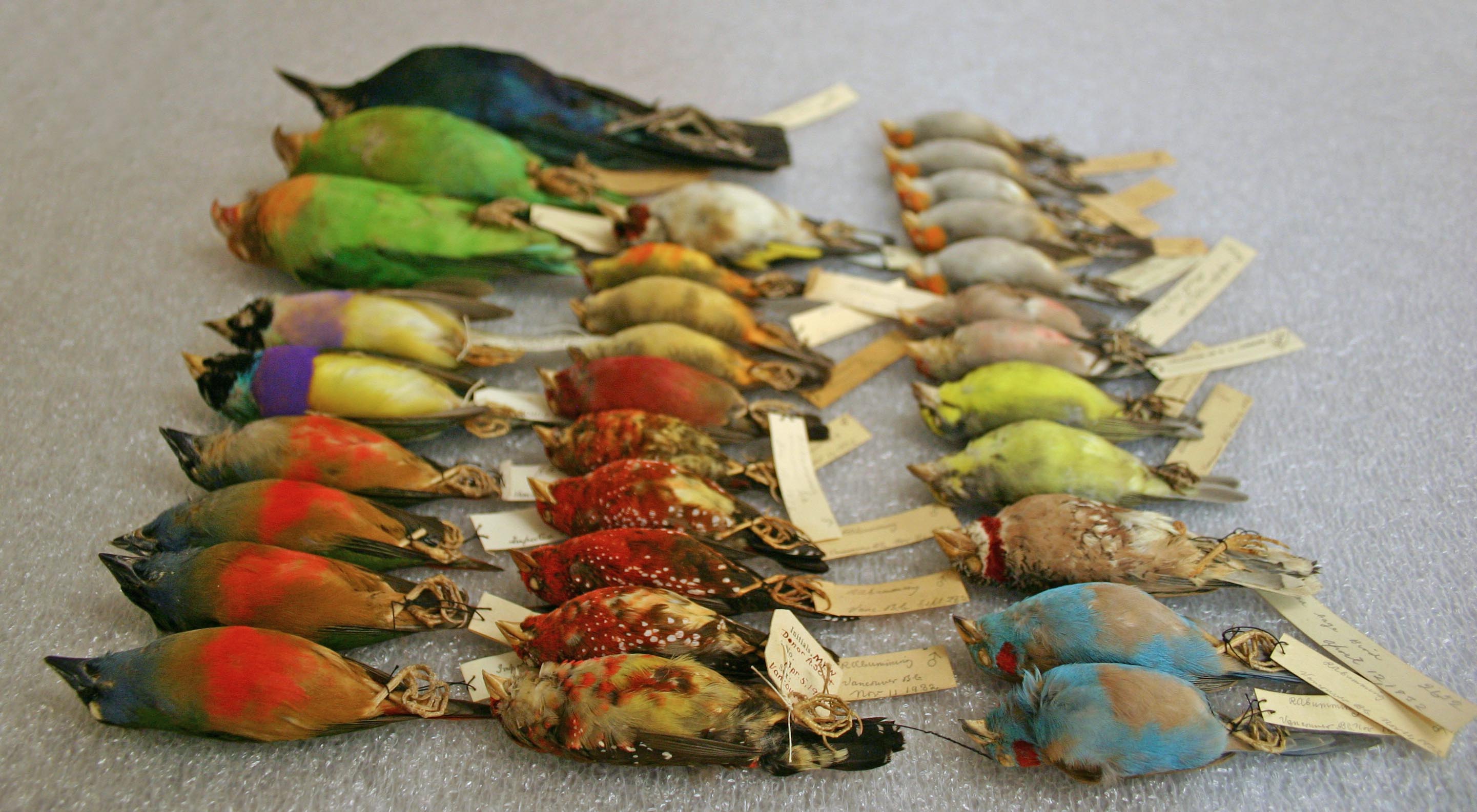 The finches in the preceding photo all were caged birds and are more of a record of what was available in the pet trade in Canada in the 1930s. Had they been found in the wild – even as accidental escapees, they would be valuable – if, and only if they had associated data on when and where each animal was collected. To avoid filling a museum with pointless artefacts, we need at the very least, a description of collection location and the time/date when each specimen was collected. With Google Earth, it is easy now to add a dot on a map to show where you collected a specimen.

This Budgerigar (Melopsittacus undulatus)(RBCM 008602) obviously is a pet bird that escaped, but it had been found in the “wild” (i.e., Calgary) and is a record of a stray in Canada. Not to be too picky, but I’d like a bit more data than with this specimen: Calgary is a big city (even in 1950), and it didn’t take all of January to catch this bird. Perhaps it was pining for the fjords and took a wrong turn away from the coast (cue the John Cleese Parrot-sketch impersonations).

In the last few months I had been asked to retrieve a rattlesnake (RBCM 1244) from the herpetile collection for photography. Turns out the specimen is from Pennsylvania and does not fit the museum’s mandate [to preserve the Natural History of British Columbia]. Best yet, this specific snake was identified as a Prairie Rattlesnake (Crotalus viridis) in our database, and a split second was all it took to realise the snake is a Timber Rattlesnake (C. horridus). To me this rattlesnake is useless for BC research and won’t go on exhibit. We will remove this snake from the Herpetology collection – in a process called deaccessioning – formal removal from the museum collection.

Obviously we do not simply throw specimens in the trash – we will search for other institutions – perhaps a museum in Pennsylvania – which would have interest in a Timber Rattlesnake from Wyoming County, 1969. Timber Rattlesnakes may not even live in that county anymore given population declines. Perhaps the snake could prove valuable as a historic record, although its location is not specified within Wyoming County.

Even things as neat as Narwhal (Monodon monoceros) tusks have been sent off to other museums. Narwhals are not part of British Columbia’s fauna. There is little reason to store something as large as a tusk unless it has regional significance. We do keep Mammoth tusks because they are found in British Columbia – but we cannot base our collection policy on the probability someone would say, “wow that’s neat”. The “Wow that’s neat” attitude is sufficient justification for importing fun travelling exhibits though (SWI, MOS). 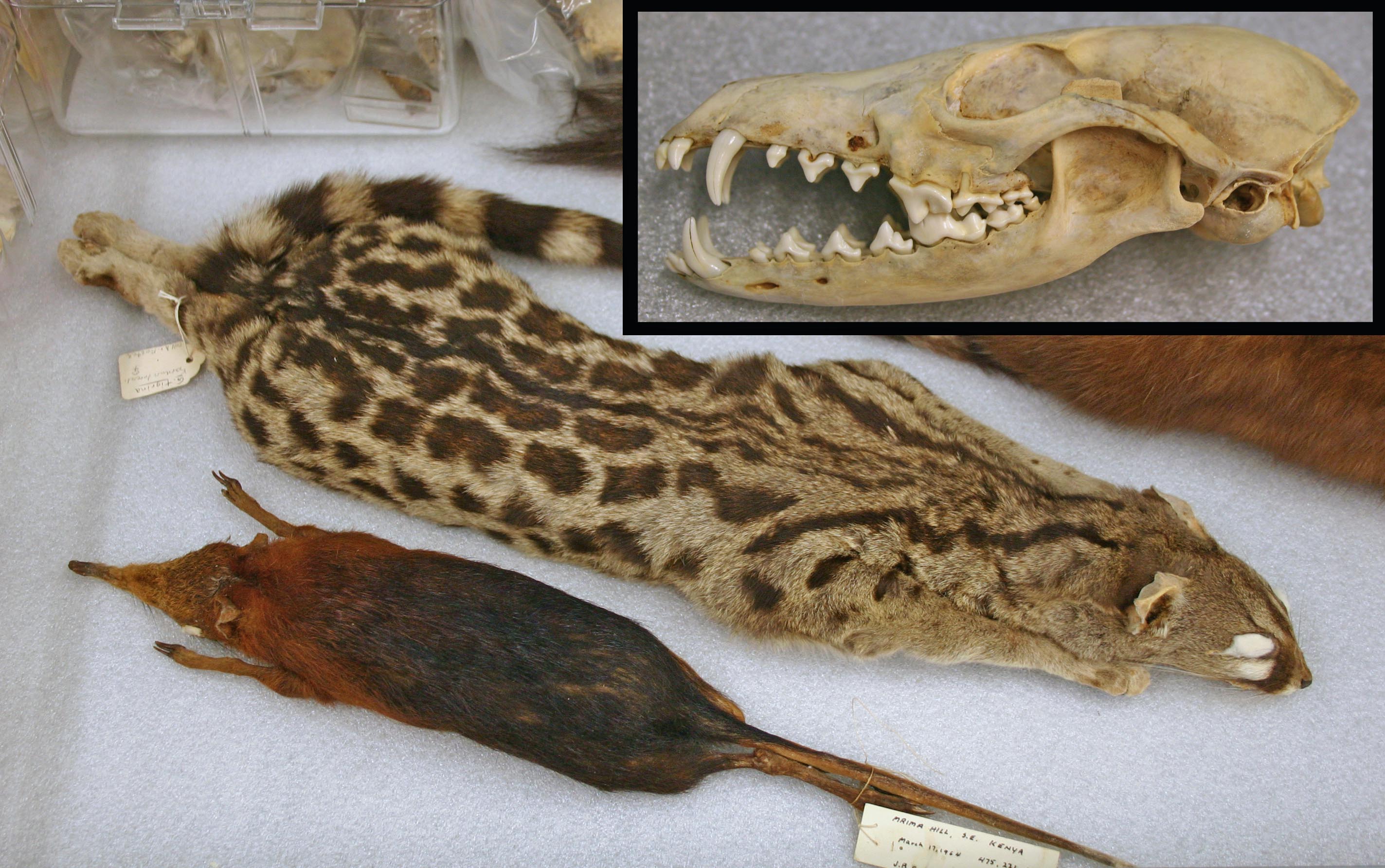 I am a collector, but I am not a packrat. Snakes from Ontario, fishes from Italy, someone’s prize koi, odd mammals from Africa and Argentina (above) or animals that died in a zoo are not relevant to this museum and should be sent somewhere they will prove useful. We did recently receive several Vancouver Island Marmots that represent natural mortality in the wild and some mortality in the captive breeding program. All of these red-listed mammals are valuable, but the marmots found in the wild are our top priority. Even scavenged carcasses are valuable – a skull and a few bones are all we’d need to represent an individual in time and space. 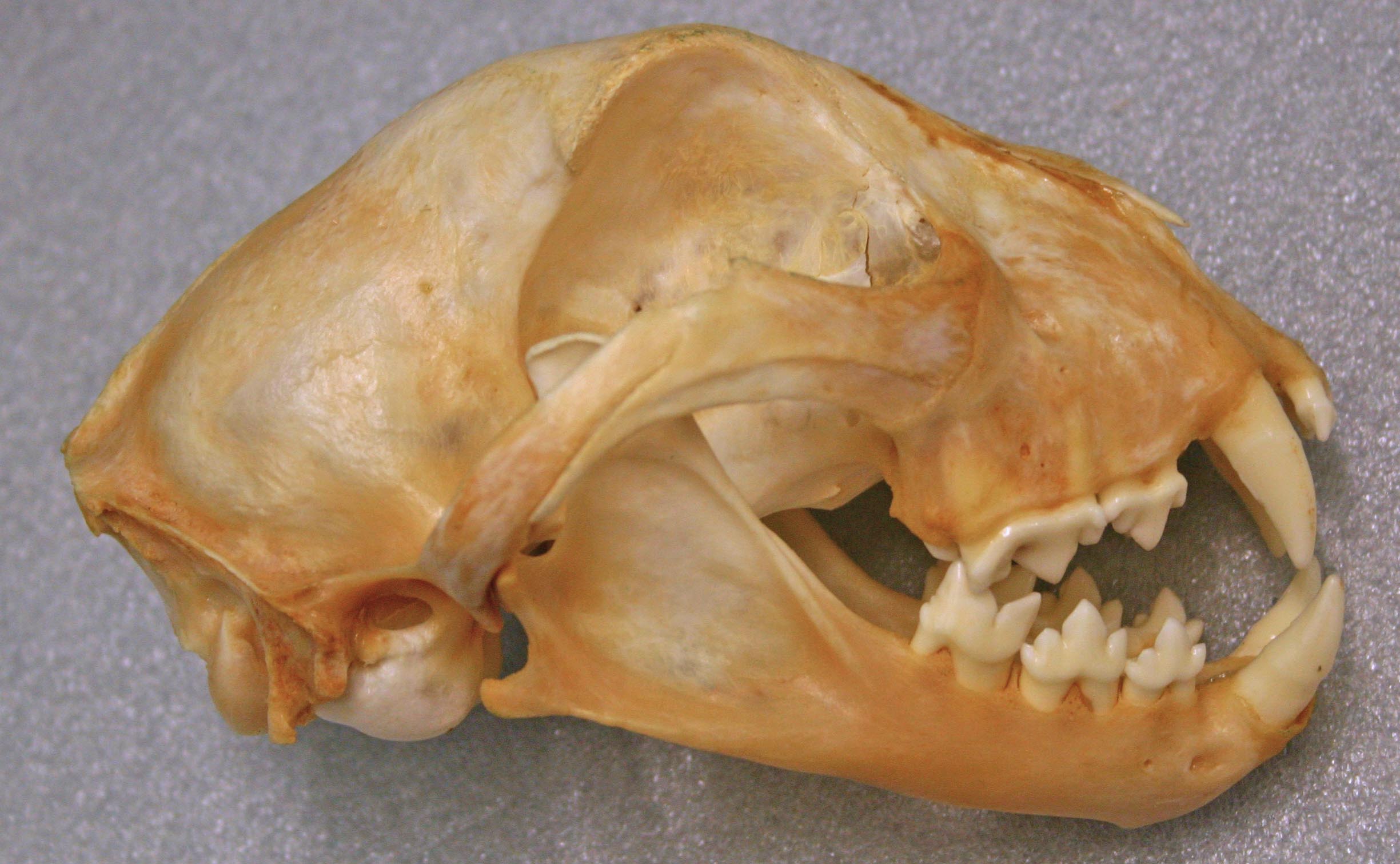 In our list of odd “non-BC” specimens, we also have an elephant tail, python eggs, a few hatchling crocodiles, a cheetah skull, and parts of Birds of Paradise – and while interesting and could someday be used in public programming, they don’t belong in a research collection. 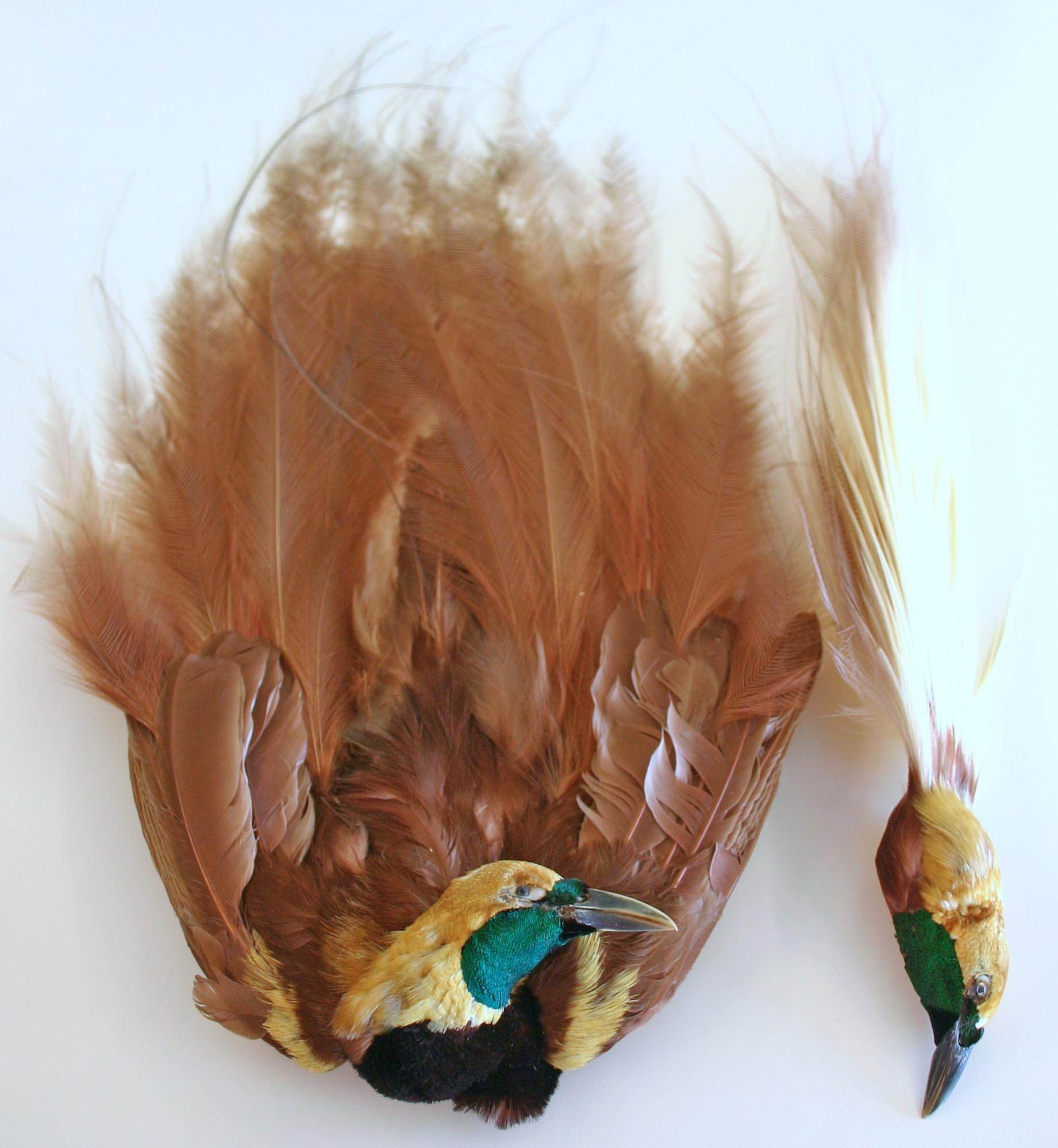 The Boa constrictor (RBCM 519) could have been found loose in Vancouver, or it could have been a pet that died in captivity. Its associated data are not explicit enough to help me evaluate this specimen’s relevance. Perhaps the original donor can help resolve this. Neat thing about Boa constrictors is that they are one of the few animals commonly referred to by its latin name – party trivia. 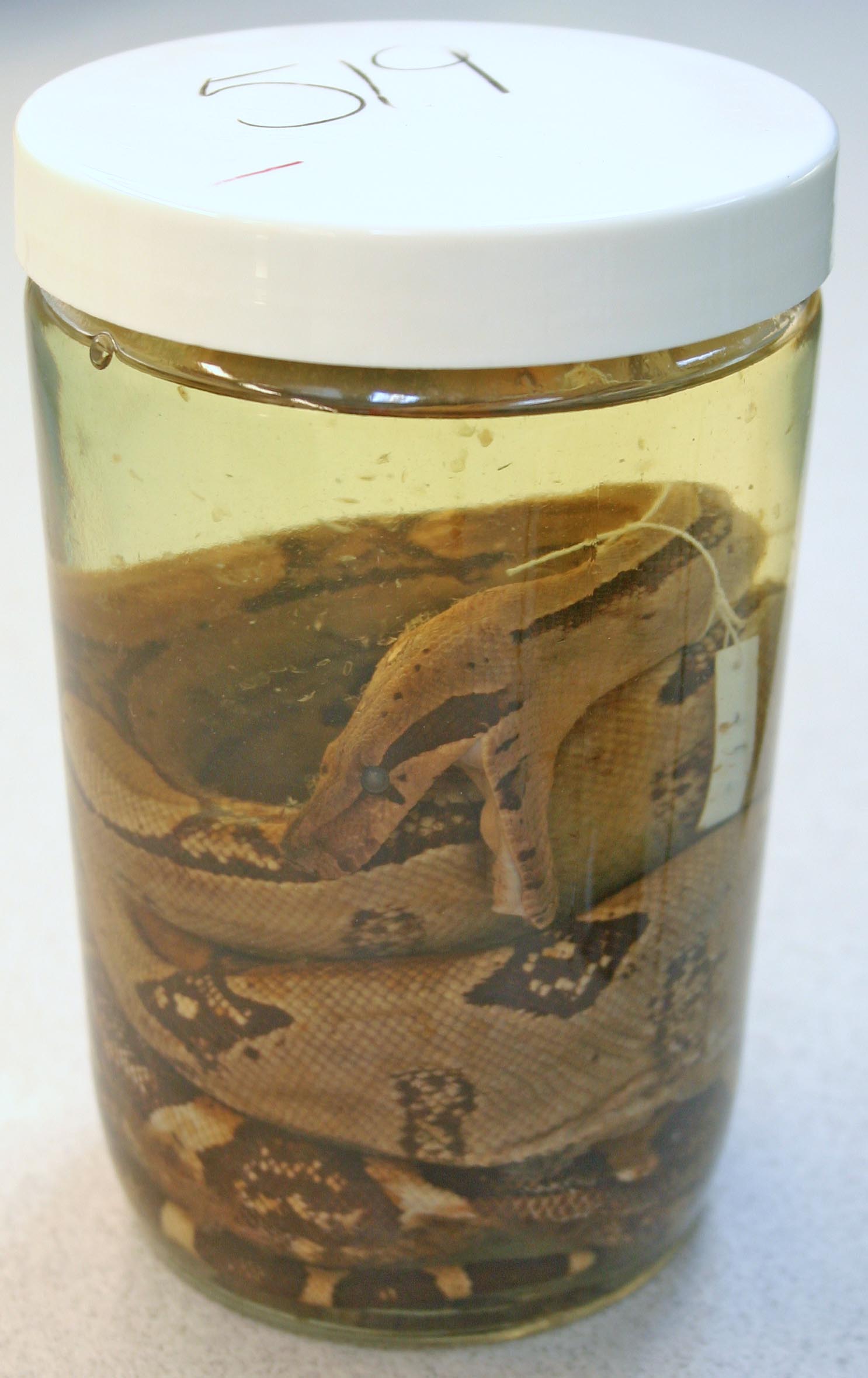 We are more selective in our acquisitions these days. If someone’s pet Goldfish (Carassius auratus) dies, I don’t want it. If someone finds a Goldfish in a creek or lake – I want it. I happen to like London Shubunkins – they are of nostalgic value to me – but they only go in the museum collection if found in the wild. 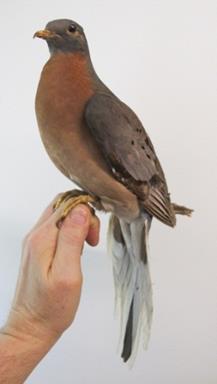 Some specimens we keep – such as Passenger Pigeons (Ectopistes migratorius) – because they are extinct. Some we keep because they are globally endangered. And while these specimens may not have come from BC, we cannot simply discard such rarities. If possible we look for institutions with a broader global mandate to house such material. However, even with BC specimens there are limitations on what we can easily store.

For some large animals we only keep selected parts (like a pelt and skull), or just the skull. At least skeletons can be disarticulated so we can store specimens in far smaller containers. I suppose the botanical equivalent would be like trying to store an entire tree – obviously botanists restrict themselves to nuts, pressed leaves, cones, samples of bark, root, branches and perhaps a cut section of a tree trunk. But even these space-saving items are pointless in a research collection without data indicating where and when the specimen was taken.

Some specimens look useless when they arrive, like the Anna’s Hummingbird (Calypte anna) below. This bird’s plumage is mostly gone, but its skeleton will be a useful addition to the collection and serves as a token of the species’ presence in time and space. This bird was collected by a recently retired curator, and he included detailed collection notes. 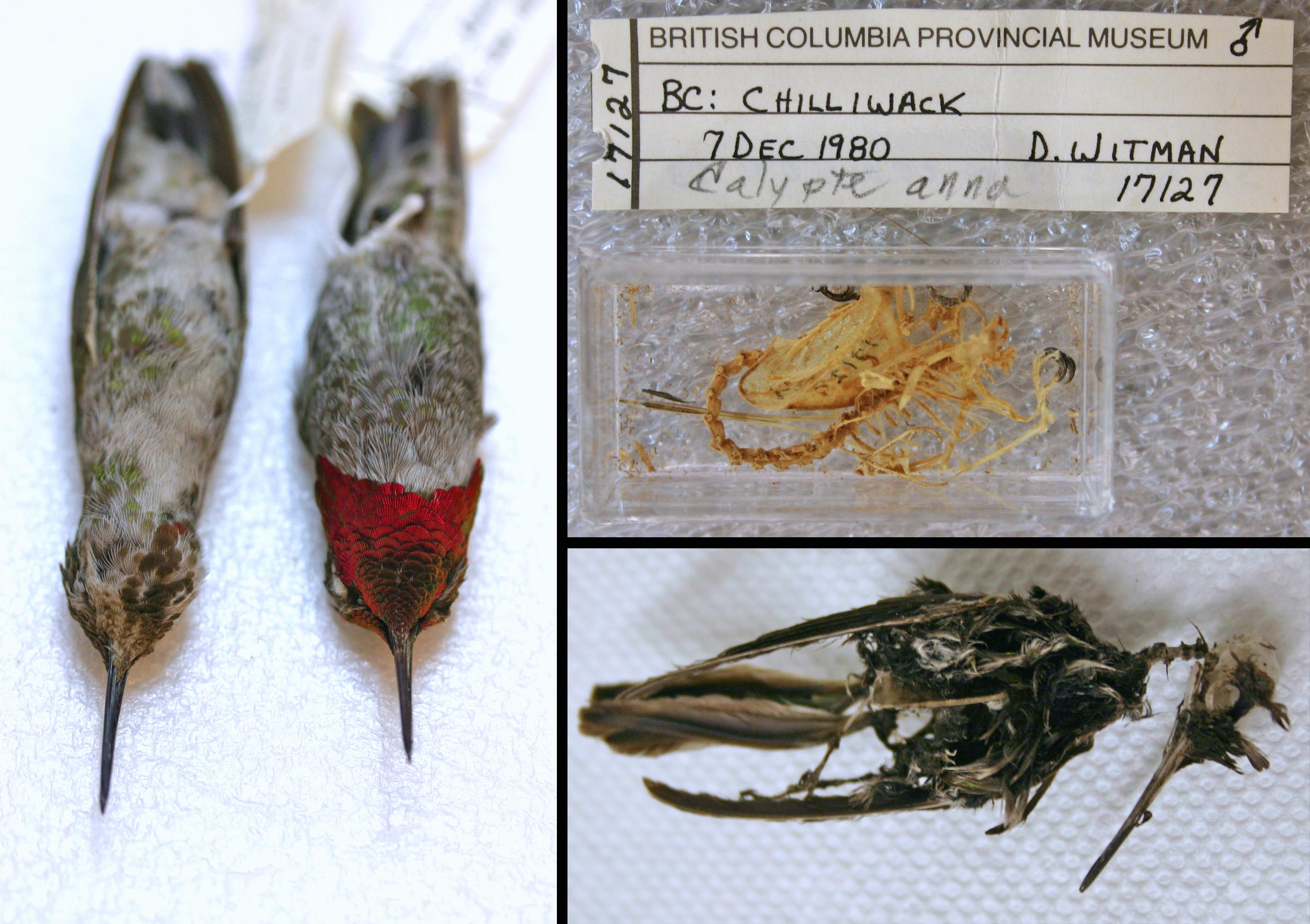