Goldeye (Hiodon alosoides), are found in the Peace and Liard river systems. This general group of fishes (the Family Hiodontidae) has a long history here in British Columbia, with fossils of Eohiodon known from Eocene rocks. The scales of Eohiodon are amber to red-brown coloured from minerals that replaced the original bony tissues, but living Goldeye have incredibly shiny scales. Since other osteoglossomorphs are shiny, I’d be shocked if Eohiodon wasn’t.

A photo of a Goldeye from Stewart and Watkinson (2004) showing its shiny cycloid scales.

Bony Fishes can have cycloid or ctenoid (pronounced teen-oid) scales, covered by an epidermal skin layer only a few cells thick. Those epidermal cells and a layer of mucous form a primary barrier to infection in fishes, but the layer is delicate and translucent. Bony scales sit in pockets between the epidermis and dermis. Remove the epidermis and any scales, and you reach the dermis and its pigment-bearing cells, including the iridiophores which house guanine crystals. Yes – the same guanine found in your DNA. 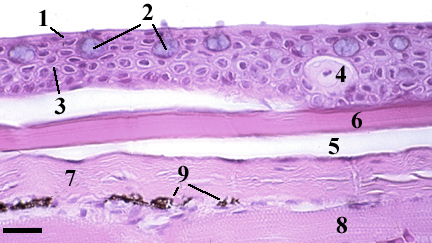 Guanine combines with other Guanine molecules to form a complex multi-layered, crystaline structure. Guanine crystals with their multiple layers have a high refractive index and light refracts and reflects through the crystal giving fish skin its silvery shine. It also is found in the tapetum lucidum (the reflective layer) in the eyes of some animals (and perhaps Riddick). 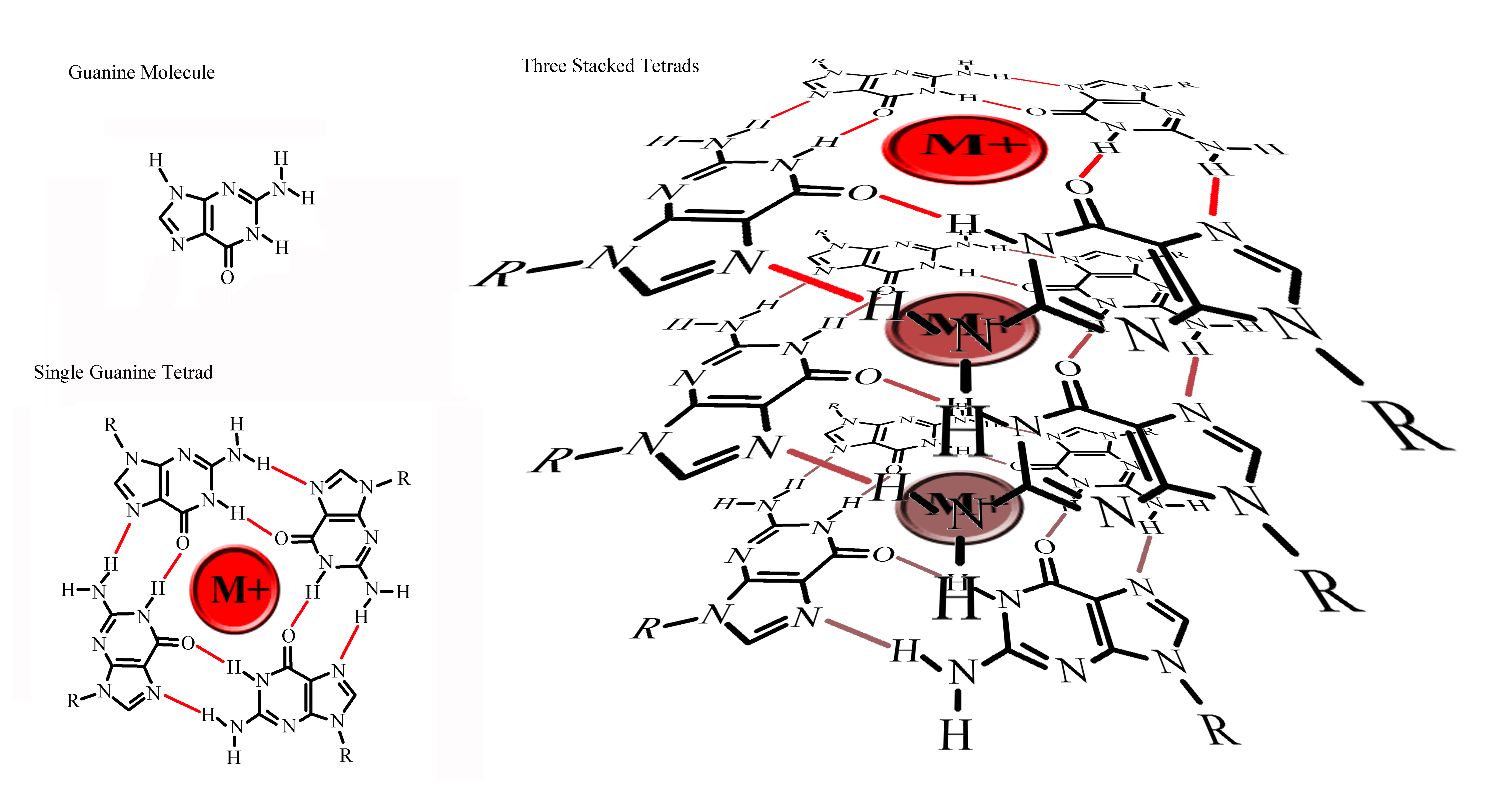 This diagrammatic view shows a single guanine molecule, groups of four guanine molecules (a tetrad) which form around a cation (commonly Potassium), and a schematic triple-layer of tetrads just to give an idea of complexity in a simple guanine crystal. Obviously this drawing does not come close to showing how guanine tetrads are oriented in the crystal lattice, nor does it hint at the number of molecules in a real crystal. But you can imagine though, that light would bounce around between and within layers. Now that I look at it here – my drawing reminds me more of a crystalline character from Star Trek. 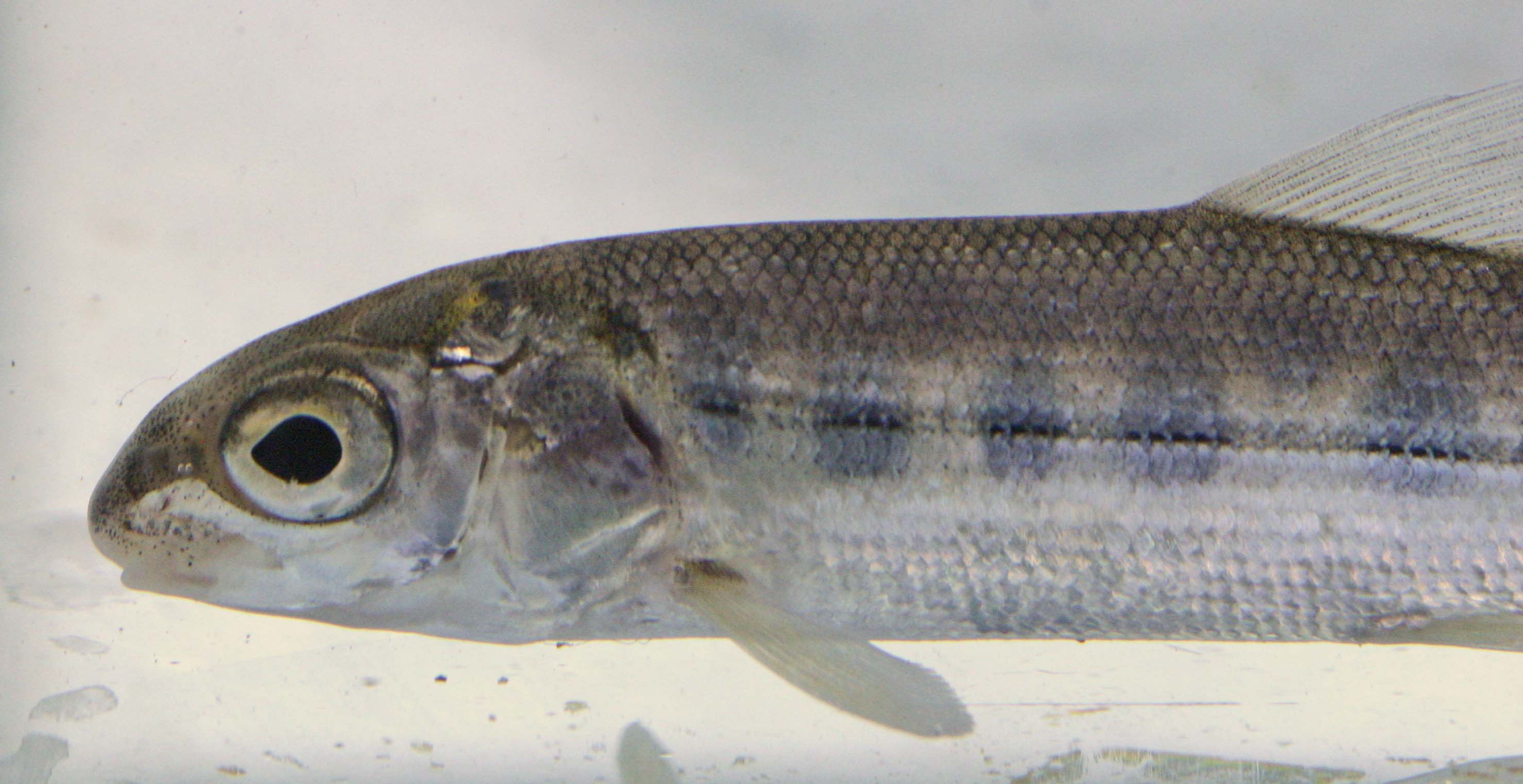 A close-up of a Mountain Whitefish (Prosopium williamsoni) from the Similkameen River showing silvery belly and flank, and melanophores producing fine dark spots (especially obvious on the head).

In most fishes like this Endler’s Guppy (Poecilia wingei), pigmented cells combine with iridiophores to produce a kaleidoscope of colours, and yes spawning Sockeye (Oncorhynchus nerka) are stunning, but in freshwater, you can’t beat Killifishes and Blue Rams (Mikrogeophagus ramirezi, below) for colour. The complex colours in fishes are due to the interplay of a range of pigment cells – which reflect yellow (xanthophores), red (erythrophores), white light (leucophores), and blue (cyanophores). 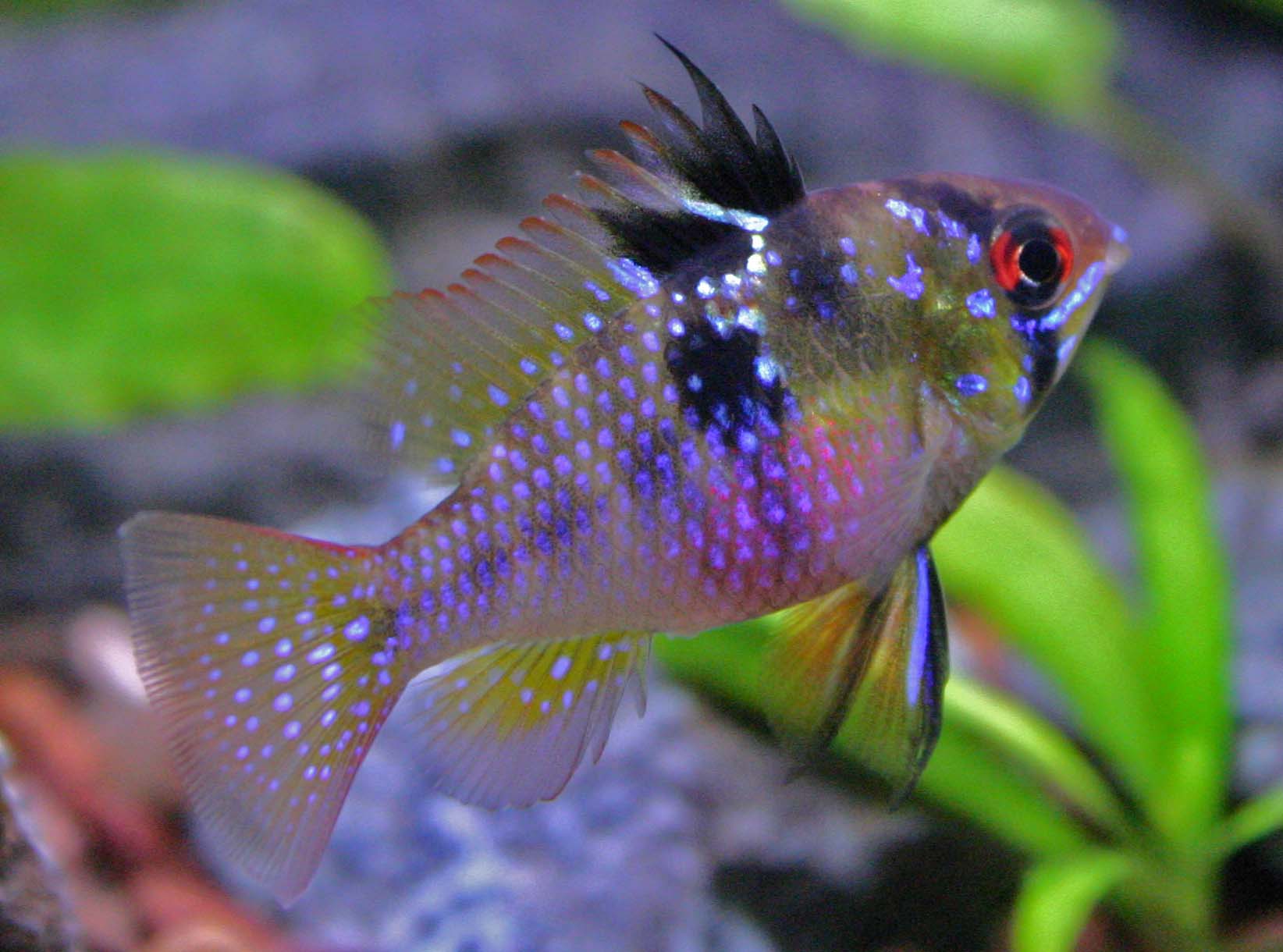 Melanophores produce black to brown colouration (like the dark eyestripe and blotches on the Blue Ram). Pigment cells expand and contract with animal behaviour, light levels, and the distribution of these cells changes as fish age (just look at the differences in pigments and distribution of colours in Sockeye Salmon as they age). Sea-run salmon with plenty of guanine in their skin are far more silvery than their freshwater conspecifics.  Breeding adults resorb scales, and guanine is metabolised, leaving only the gaudy spawning colours.

As always, nature has been exploited for industry. Guanine crystals from fishes have been used in cosmetics to get a pearlescent effect, and are used in some paints, beads and plastics. As far as I know, no fish were harmed in the production of the metallic paints I use for my models, but that’s not to say my hobby is ecologically friendly. I still use paints, solvents, resins and plastic. Standard metallic model paints are made with ground flakes of metal, and only the newer “metallizer” paints produce a finish close to the shine in Shiners.

Photo of an Emerald Shiner (Notropis atherinoides) from Stewart & Watkinson (2004).