Wonder Sunday is a monthly family event, where we explore tangible gallery spaces and intangible ideas and curiosities that are present within the Royal BC Museum.  It’s always a lot of fun…

So this month we thought to extend it provincially!

We invited museums from all over the province of BC to take part. 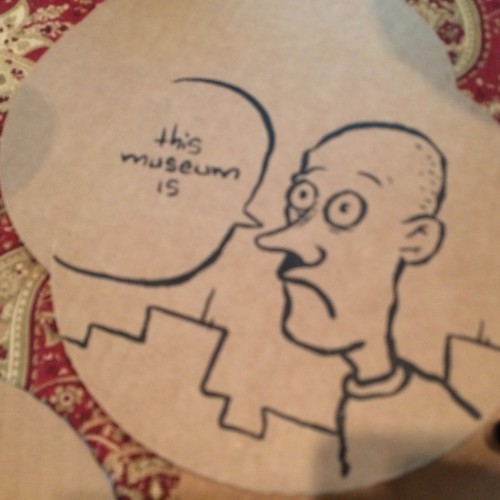 Excellent question.  There are so many great museums in every corner of the province, and our thinking was that by having museums submit ideas for activities, we would get to know a little about what is happening near and far.  We partnered with eight museums, and all the activities that came to me, I sent out to the whole group.  In this way we were sharing ideas and connecting through our shared interest in museum education.

So on Sunday February 23rd we at the Royal BC Museum tried out all the activities (with some tweaks to fit them within our gallery spaces).

First up…an activity from the Chilliwack Museum and Archives.

Their activity was called Up from the Ashes, and was inspired by a 1906 fire that ravaged six wooden structures in the town.  After that event, the city decided to use different building materials.  The event also smartened up their fire prevention and response. 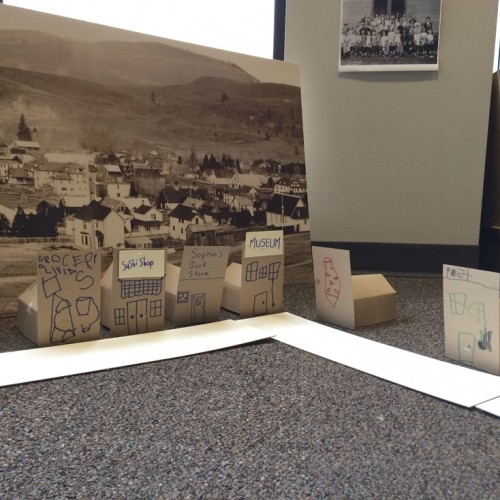 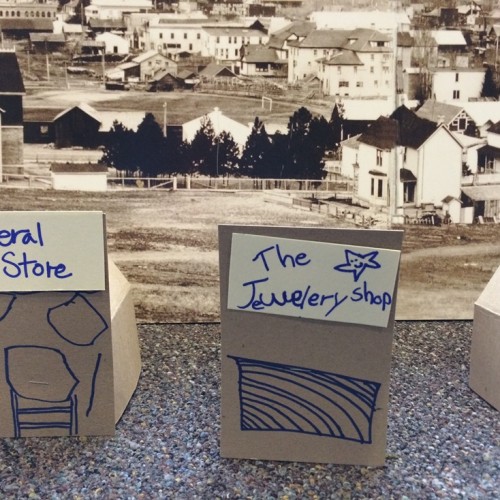 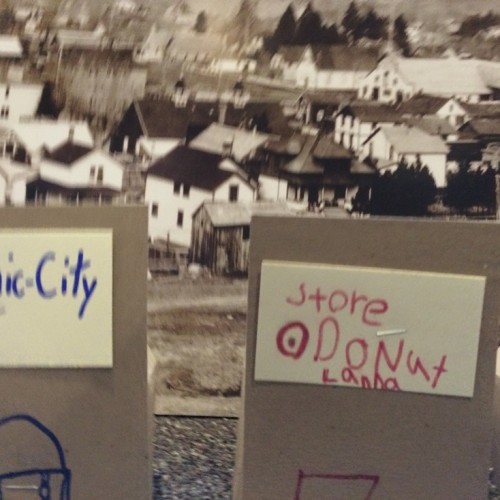 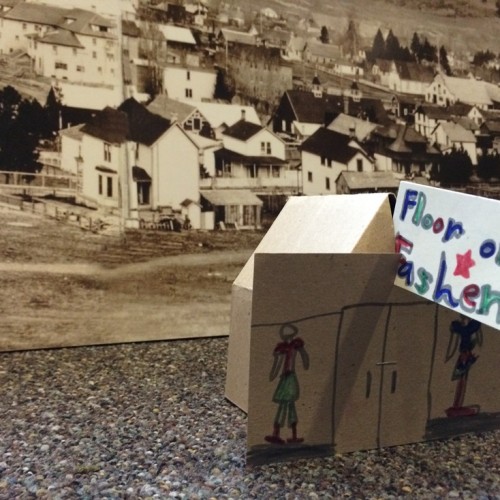 The kids made models of false front building and decided what those buildings were used for.  We got everything from a sushi place to a fur trading post.  And of course a donut shop.  We also posted pictures from our archives of Chilliwack.  Though the big photo behind the kids buildings is from Mission.  A kind of archival mash-up.

Next up…an activity from Heritage Park Museum in Terrace.

This activity was about town identity, and we piggy backed on a Heritage School Program display that we are currently building.  In that school program, classes are asked to bring in just one object to best represent the collective identity of the class.  Not easy. 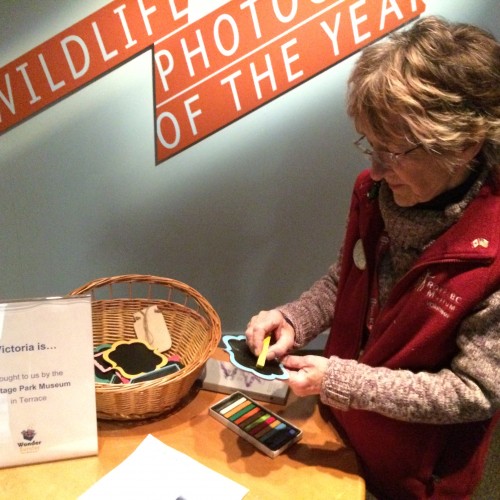 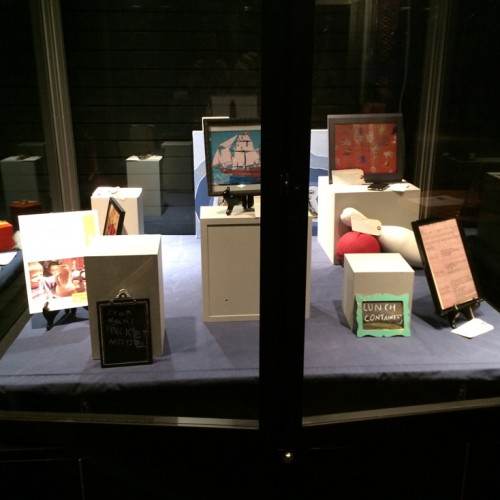 So for Wonder Sunday we asked visitors to do the same thing.  But with ideas.  If they could pick one object from their town to have in the museum, what would it be.  And then we put those ideas into the case.

Next up….an activity from the Buckley Valley Museum in Smithers.

Joseph Coyle was an inventor from Smithers, and was one of the figures that invented the egg carton (and created a machine to make those cartons).  That machine is in our collection here at the Royal BC Museum, and it seemed like a good story to explore.  So the Buckley Valley Museum sent photos and text about Joseph  Coyle, we brought out one of the egg cartons from our collection, and then kids got to make their own inventions. 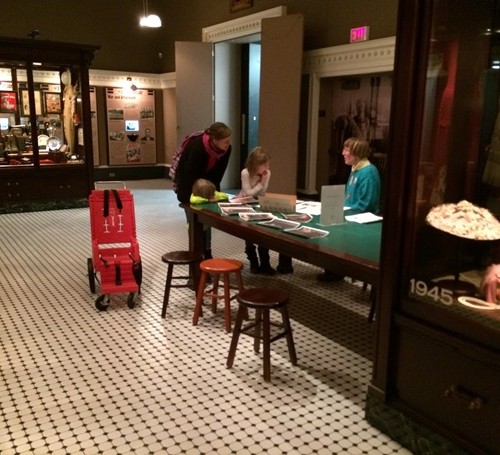 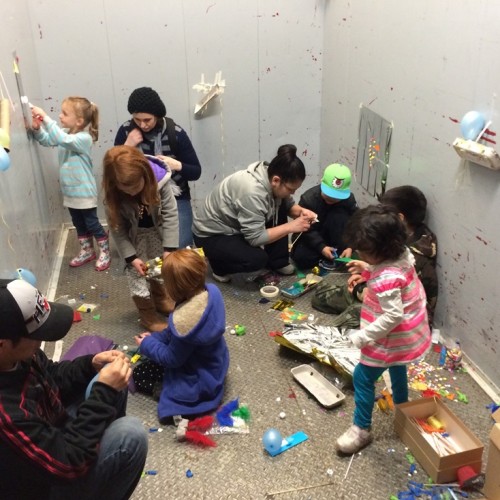 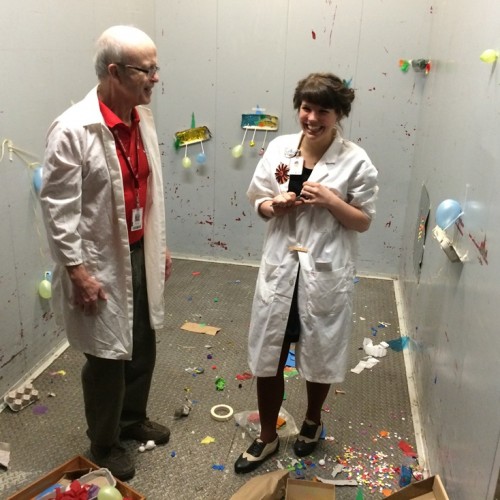 And they did this in our makeshift inventors lab (the freight elevator).  Some amazing inventions were created over the course of the event.

Next up…closer to home, our archivist Dennis Duffy.

Dennis curated a selection of archival films from towns all over BC, including from the participating towns taking part in the event.  These films were shown in our Majestic Theatre and Dennis talked with visitors about the range of films and how they were made, and how they got into our collection…and much more. 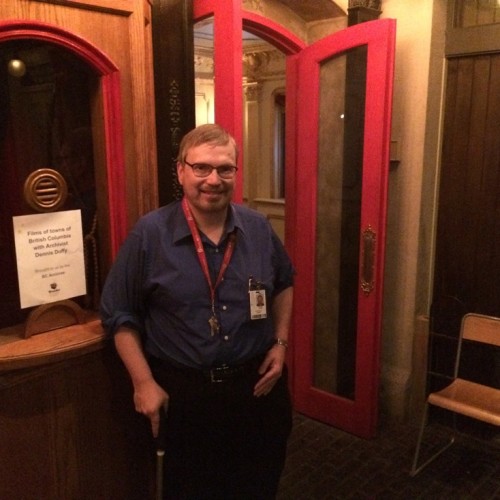 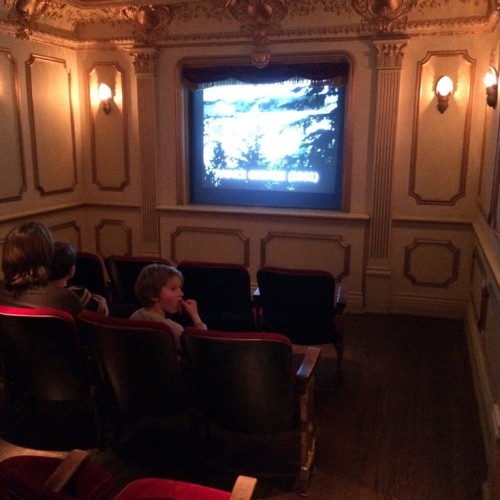 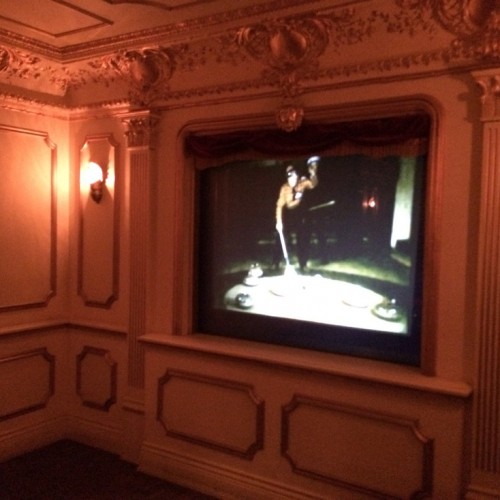 It is always fun to have new (old) films in the Majestic Theatre.

Next up….an activity from the Rossland Museum.

This actually took a bit of planning.  The Rossland Museum set up writing stations in their gallery spaces, and encouraged kids in Rossland to write to kids in Victoria about the snow- as we don’t get a lot of that here (ironically it did snow in Victoria on this Wonder Sunday).  The Rossland Museum sent the letters to us, and we made a display.  And then encouraged kids from Victoria to write to Rossland kids about the Ocean. 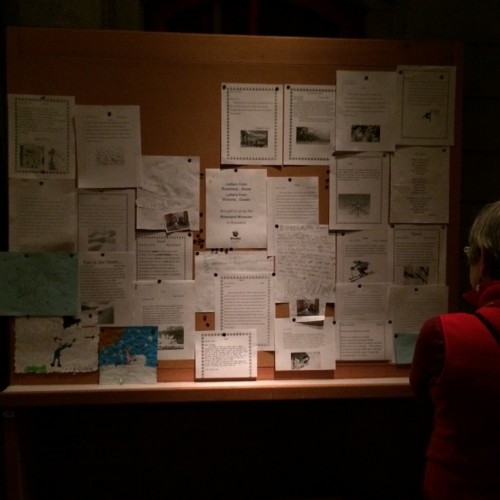 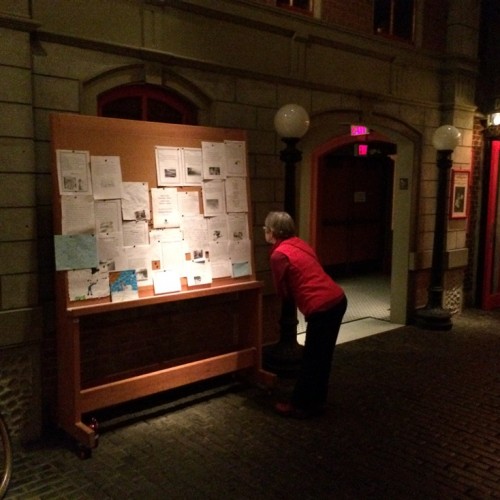 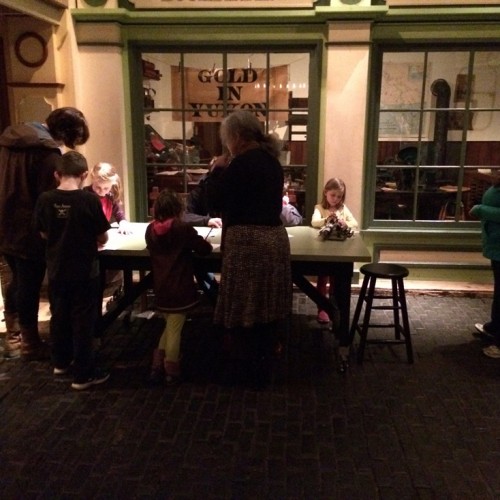 We got lots of great notes (which the kids dropped off in the old red mailbox in Old Town), which I will be sending to Rossland.

Next up…an activity from the Kelowna Museums.

This was a popular spot…and was a tic tac toe activity that highlighted the importance of Grizzy Bears and Salmon for the town of Kelowna.  We made buttons with the images of the animals, and after the kids played the game, they got a button of the animal they played with. 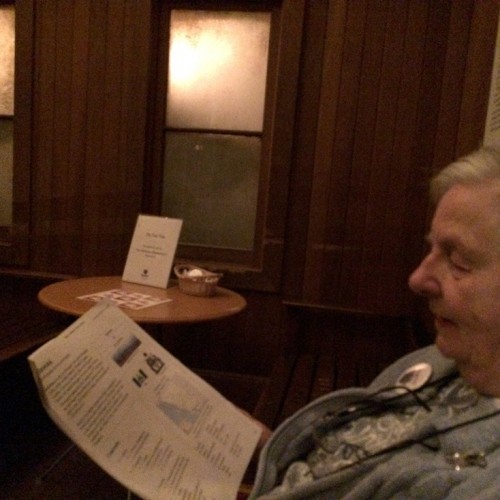 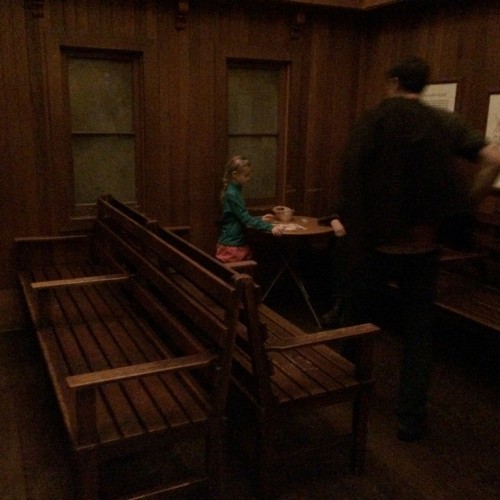 And we played up the story of being in the train station.  So while waiting for the train on your way to Kelowna, why not play a game. 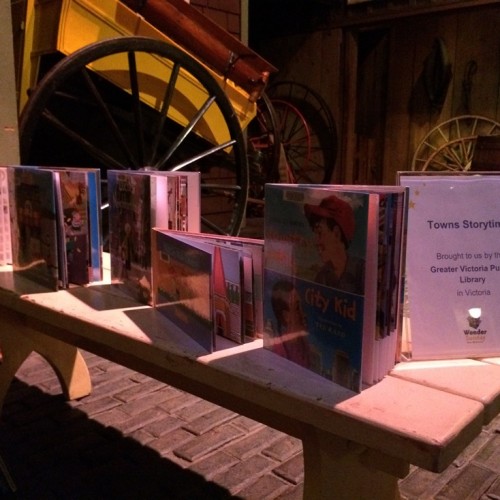 This was a wonderful selection of books, about all kinds of towns.

Next up…an activity from the Fort Nelson Heritage Museum.

They sent an activity of sharing Bannock.  But since we can’t bring food into our galleries, we did the next best thing.  We brought in one of our artists in residence, Gareth Gaudin. 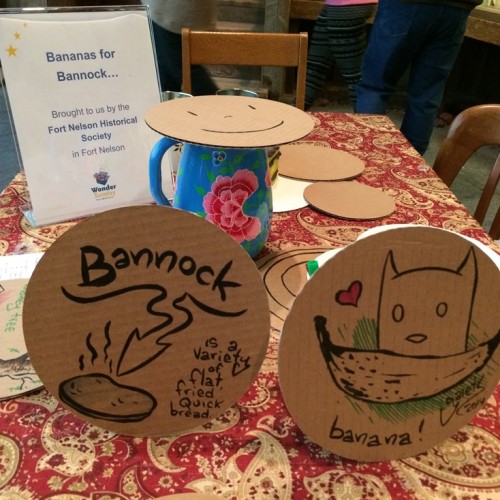 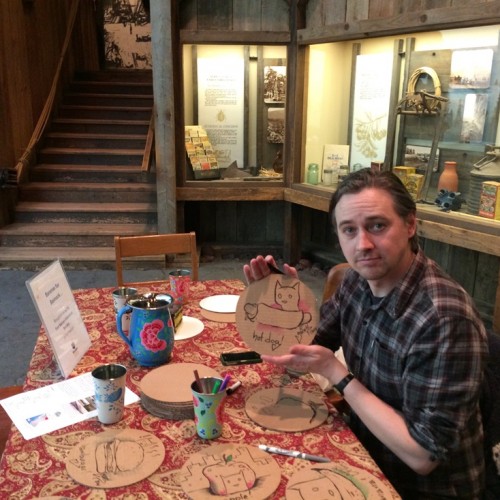 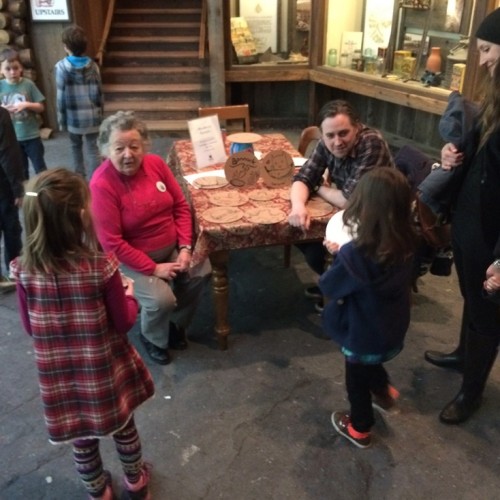 One boy said that avocado is his favourite food, so Gareth drew an Avocado Man superhero, meeting Spider man.  Gareth is awesome.  And so are our docents.  Eva was with Gareth for the day.

Next up…an activity from the Kamloops Museum and Archives.

The activity they sent was about Cave Art, and making a cardboard installation to draw within.  But we do have a mining cave here at the Royal BC Museum (which I rarely program within), so it was a great opportunity to explore the rock walls. 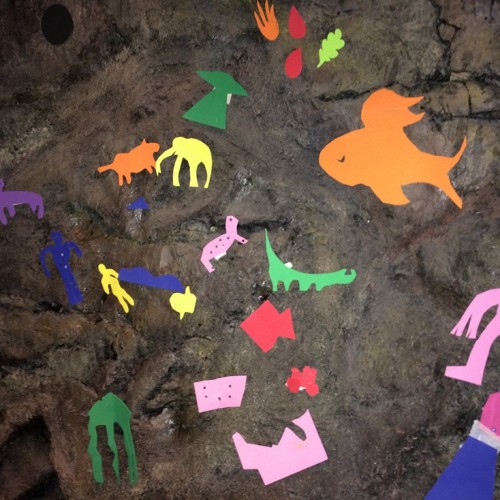 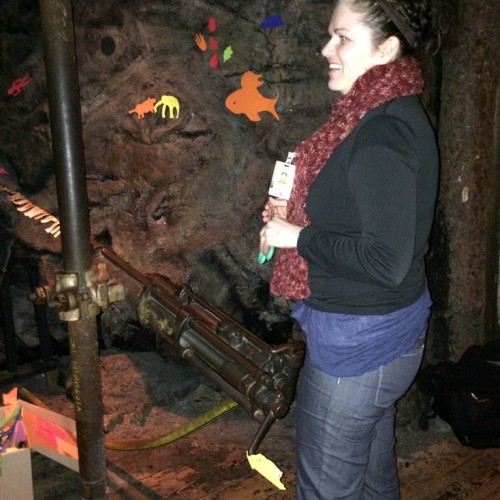 By the end of the day, the walls were covered in foam sheets that were cut out in all different kinds of things.  It made the space very magical.

And lastly…an activity from The Exploration Place in Prince George.

The activity was a fun Quiz Show of questions about British Columbia and Prince George.  The questions were multiple choice.  Since we placed this activity in the waterwheel/ gold rush area of our gallery, we decided to make it a Quiz Show showdown.  No guns though.  Just costumes, and a mid line.  Answer the question right, step forward.  Wrong, and step back.  First over the middle line is the winner.  The kids played with our docents (Emily and Jocelyn), so no pressure…just fun. 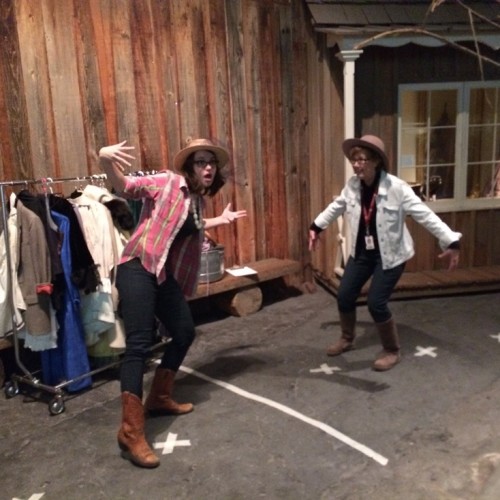 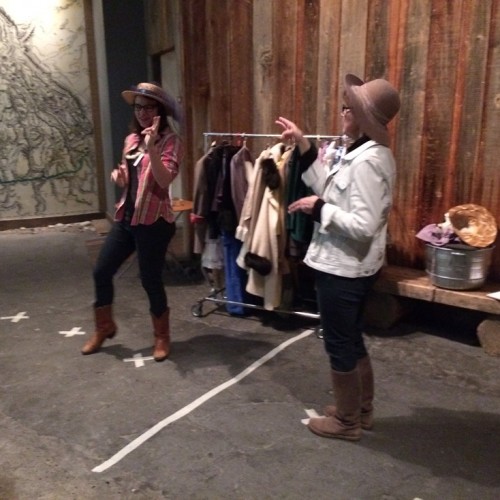 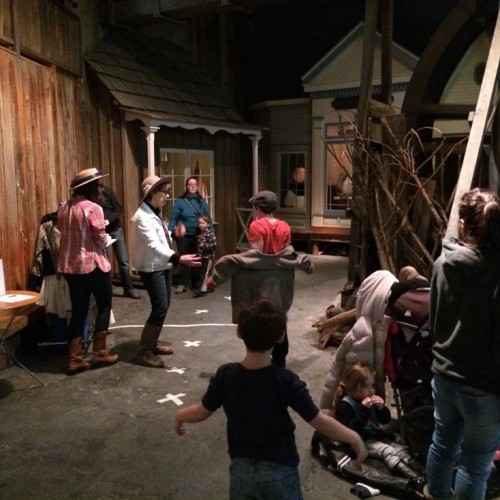 Though Emily and Jocelyn are pretty competitive.  Just kidding.

Thanks to all the families that took part and to all the museums that were involved.

We hope to do some variation of this again next year!!