Who doesn’t love the Giant Blobsculpin?

While not in the same family as typical sculpins, the Giant Blobsculpin’s common name is fairly descriptive. They are big and flabby, and look a lot like sculpins with the bulbous head, tapering body and fins in the typical positions for a ‘sculpin’. Blobsculpins also have a bitter smell to them. Sorry, this blog post is not “scratch and sniff“, and I am dating myself by even resurrecting such childhood memories of scented stickers. What’s next, Micronauts?

The Giant Blobsculpin (Psychrolutes phrictus) is in the family Psychrolutidae, and its relatives have similar gelatinous bodies – but the Giant truly is a giant in its family, growing up to 70 cm in total length. The villiform (velcro-like) teeth are large enough to draw blood on a careless ichthyologist. 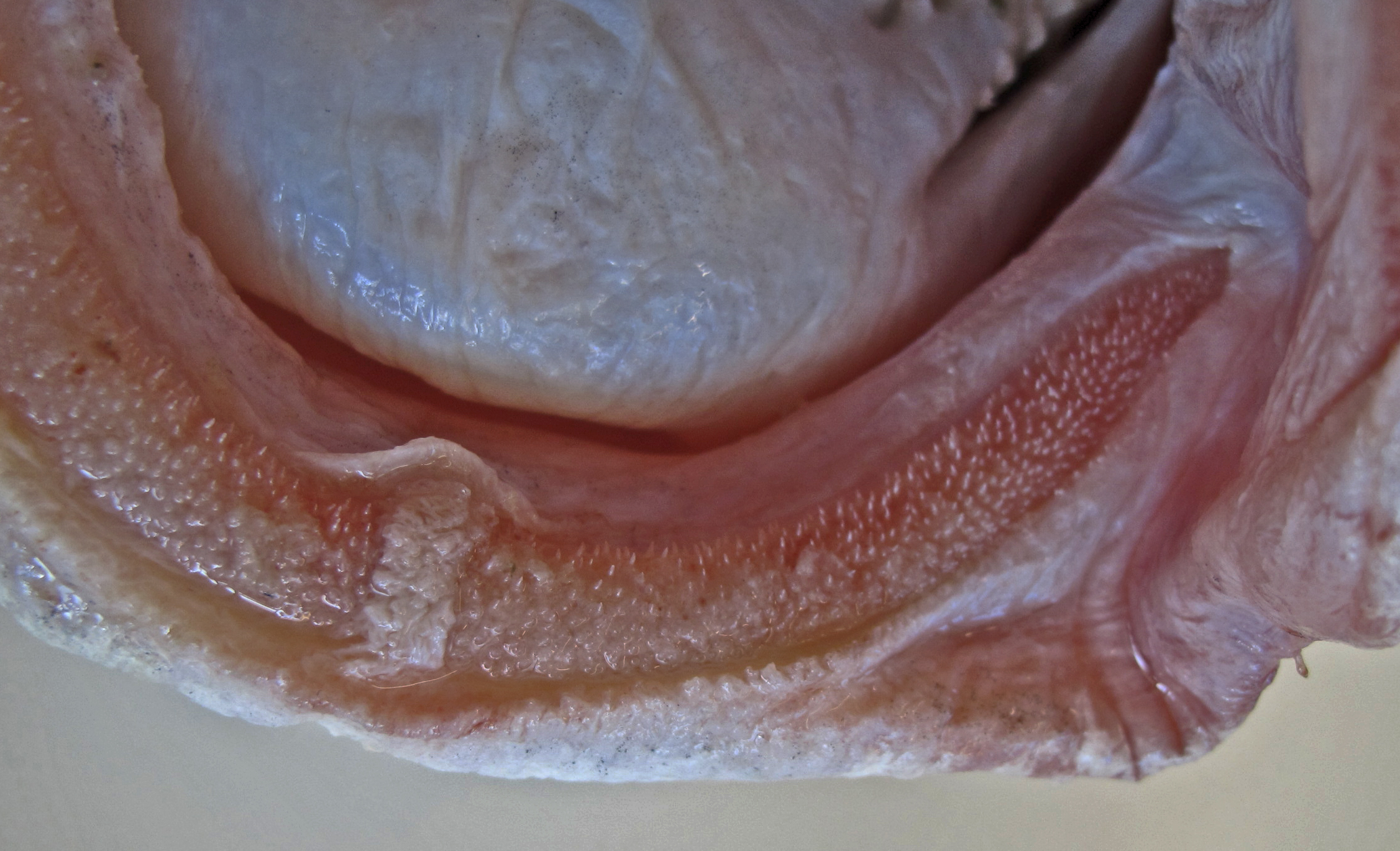 The latin name Psychrolutes phrictus means: one who bathes in cold water, causing one to shudder (the etymology for the species and the original species description is in this PDF).

The two Giant Blobsculpins in these photos were caught near Winona Basin in British Columbia’s coastal waters, October 11, 2006, from 1850 meters depth. Each fish has a T-bar anchor tag indicating that it has been sampled for DNA Barcoding. For such a gelatinous, flabby fish, they hold together in a trawl net far better than many other deep sea fishes. Their skin is tough, but very supple.

Fish massage, is it wrong? 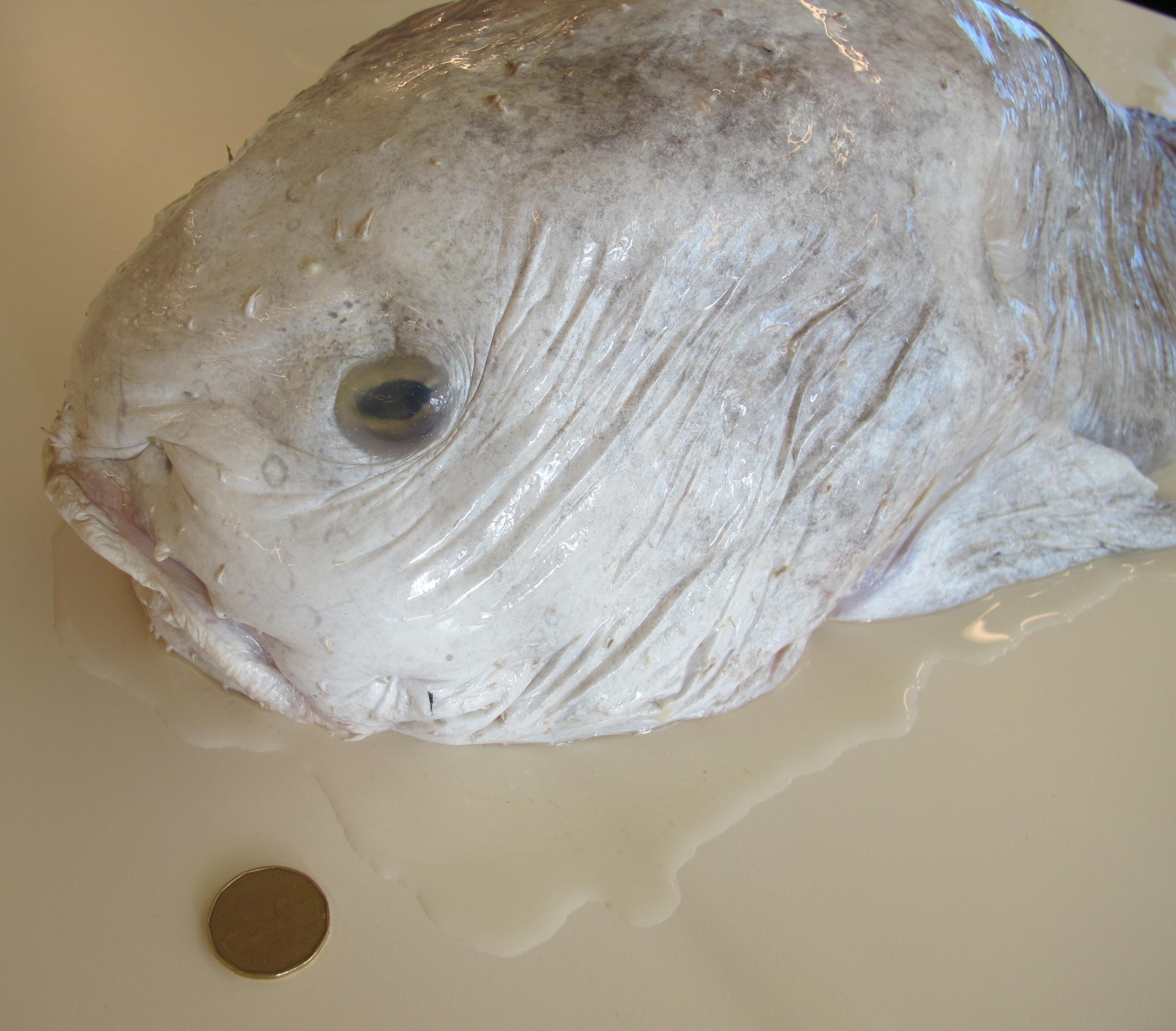 Why am I working with Giant Blobsculpins today?  They are the next specimens in the freezer to be fixed and preserved for the RBCM research collection. These specimens represent the species, indicating its presence in British Columbia for 2006, at about 50°35′; 129°02’W at 1867 m depth. Once fixed and preserved, they are available for scientific study. Each fish is anatomically unique and will have unique growth rate (growth is recorded on bones and otoliths), and unique gut contents. I have no idea what people ultimately will want to study, so I save each fish whole.

What if you don’t have a stern trawler, several kilometers of steel cable and a trawl net? No worries, you can still catch one of the Giant Blobsculpin’s relatives in the shallows using nothing fancier than a dipnet. The Tadpole Sculpin (P. paradoxus) grows to about 6 centimeters, and they are really cute – for a flabby brown-blotched fish. Some even have a splash of orange on the center of the pectoral fin, but it is not quite as orange as my colleague’s favourite McLaren shirt from Spa Franchorchamps.

You can find Tadpole Sculpins in the summer eelgrass beds along the entire coast of British Columbia, and unlike McLaren’s F1 car, they are slow and easy to catch. We have caught many in a single beach seine haul, and they’d be great fun to watch in a cold saltwater aquarium.