This week for 32 views, Kid’s Club explored the world of social media.  And to do this we went right to the source.  Eric Espig is part of the team behind the social media initiatives at the Royal BC Museum that visioned and implemented the recently redesigned website, including the Staff Profile pages, the place that 32 views calls home.

We caught up with Eric at his desk. 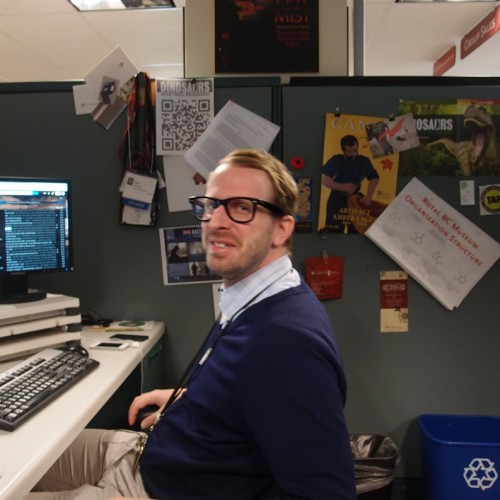 First Eric tried to explain what social media is.  Post cards and telephones are ways of communicating between people.  But they exist mostly between two people, one person on each end.  Social media takes that and expands the field.  Through social media, conversation can be more fluid and include many different people.  And often the method of communication is quick.

Then Eric talked about Twitter.  He sent a tweet out saying that the kids had arrived at his desk.  And then he turned to us and said that Twitter is a short form method of communicating.  If you are sending out a tweet, it can’t be more than a certain number of words.  So you have to be strategic about how you use your words.  And then those words go out to a lot of people.  The Royal BC Museum has almost 9,000 followers on Twitter.  Wow, that’s a lot of people.

The team sends out interesting information about the museum, important updates to museum members and visitors,  and some glimpses behind the scenes . Luckily today the Chinatown area of Old Town was being decorated by the Victoria Chinese Public School.  This was organized by their school principal, Kileasa Wong, and our Curator of History Dr. Tzu-I Chung (who we met for the 4th of 32 views).

Eric had an idea.  Kids’ Club would break into two groups- Team Twitter and Team Facebook.  And we would all report on the decorating that was happening.

We made our way up to Old Town, and the Chinatown area.  Kids from the school were hard at work decorating.  So we did our best to record what was happening…while trying not to get in the way.

The rest of this blog I will let their social media reporting take over.  Thanks Eric!