Port-side view of the CCGS W.E. Ricker with its white “otter doors” stowed at the stern.

Between 1999 and 2006, Department of Fisheries and Oceans researchers sampled along our coast to see whether a Tanner Crab fishery would be viable. These surveys are a great way for us to collect fishes and invertebrates for the Royal BC Museum.  The crew of the Coast Guard Ship W.E. Ricker set and retrieve the net (it is safer that way) and they light up a neon sign (below) to warn us to keep clear of the active fishing deck.

The scientists on board decide where to sample, then process the catch. In 2006, the average depth sampled was just over 1600 meters, to a maximum of 2300 meters (I didn’t miss a decimal point, that is 2.3 kilometers). We know trawl nets are destructive to the sea floor, but it was an experimental crab fishery, and the only way to collect decent quantities of deep sea species for scientific study. 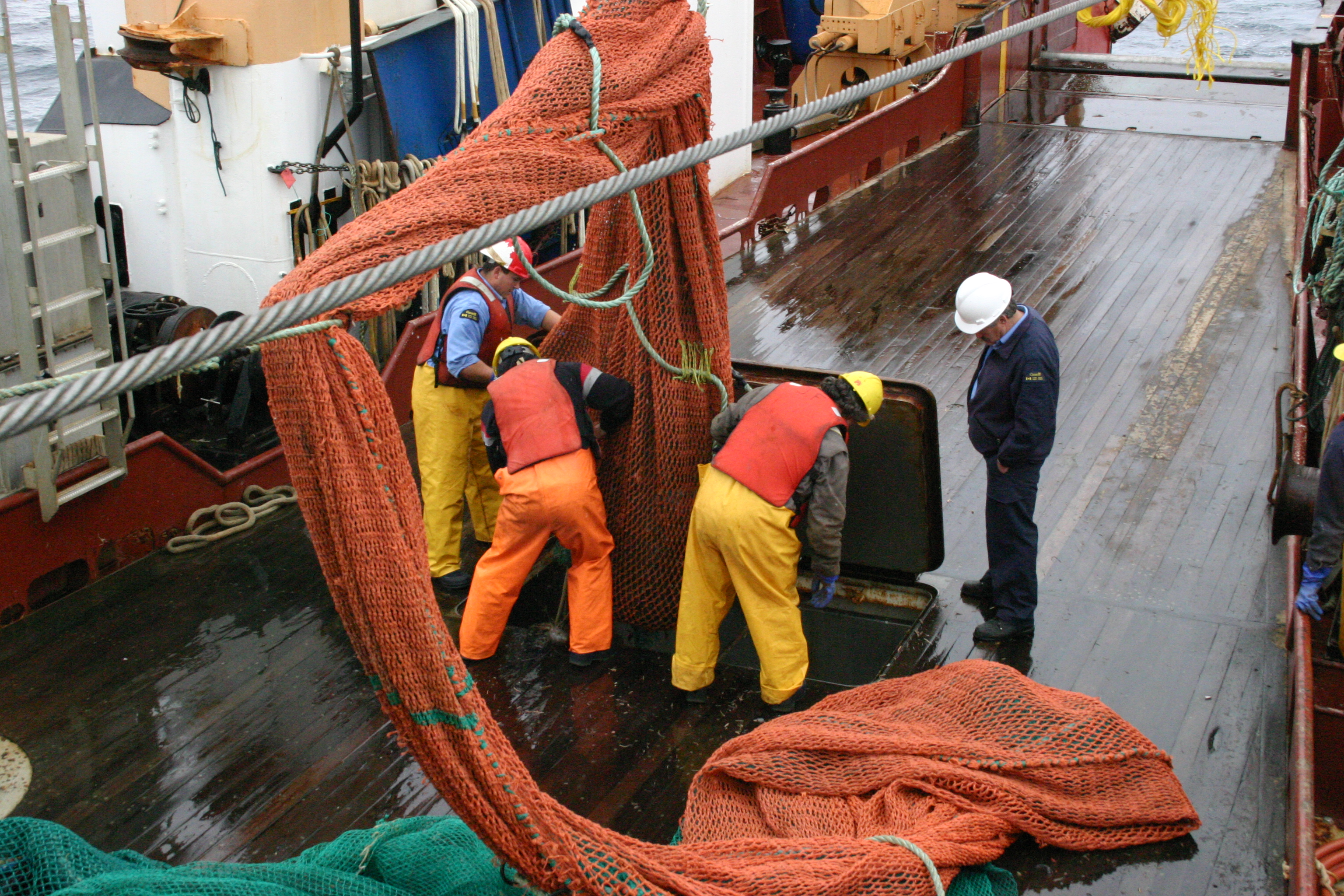 The cod end of the trawl net is dumped into the hopper beneath the fishing deck.

I joined the team in October 2006 as a fish specialist, and spent that month at sea. Autumn in the Northeast Pacific could be rough; imagine working below decks in a fishy-smelling lab, positioned between the head and the engine room, on a ship that was rolling on the open Pacific. I had no idea if I would get sea sick – but this would be a real test of gastrointestinal fortitude. I passed.

Each day the trawl net was set out, pulled for about ½ hour at the prescribed depth, and then hauled to the surface. We sat below decks like a bunch of starved nestlings, waiting to see what the net regurgitated. A trap-door on the fishing deck opened and the catch dropped into a large hopper which fed specimens into the lab. Larger animals are removed first, then the rest – the unmarketable fish mixed with invertebrates, came past me to help sort. Others picked out the invertebrates: squid, octopus, anemones, sea cucumbers, etc., and of course the Tanner Crabs. Sorting is controlled chaos as we have little time before the net is set out again at a new location. On rough days, tubs and specimens would slide around in the wet lab as the ship pitched, yawed and rolled – steel-toed rubber boots and rain gear are essential. We do our best to identify everything; then it all gets weighed. Specimens for research and museum specimens are bagged and frozen, or fixed in formaldehyde. Many specimens were sampled for DNA barcoding. Larger fishes (mostly sablefish and grenadiers) were measured and their otoliths removed for fishery research. 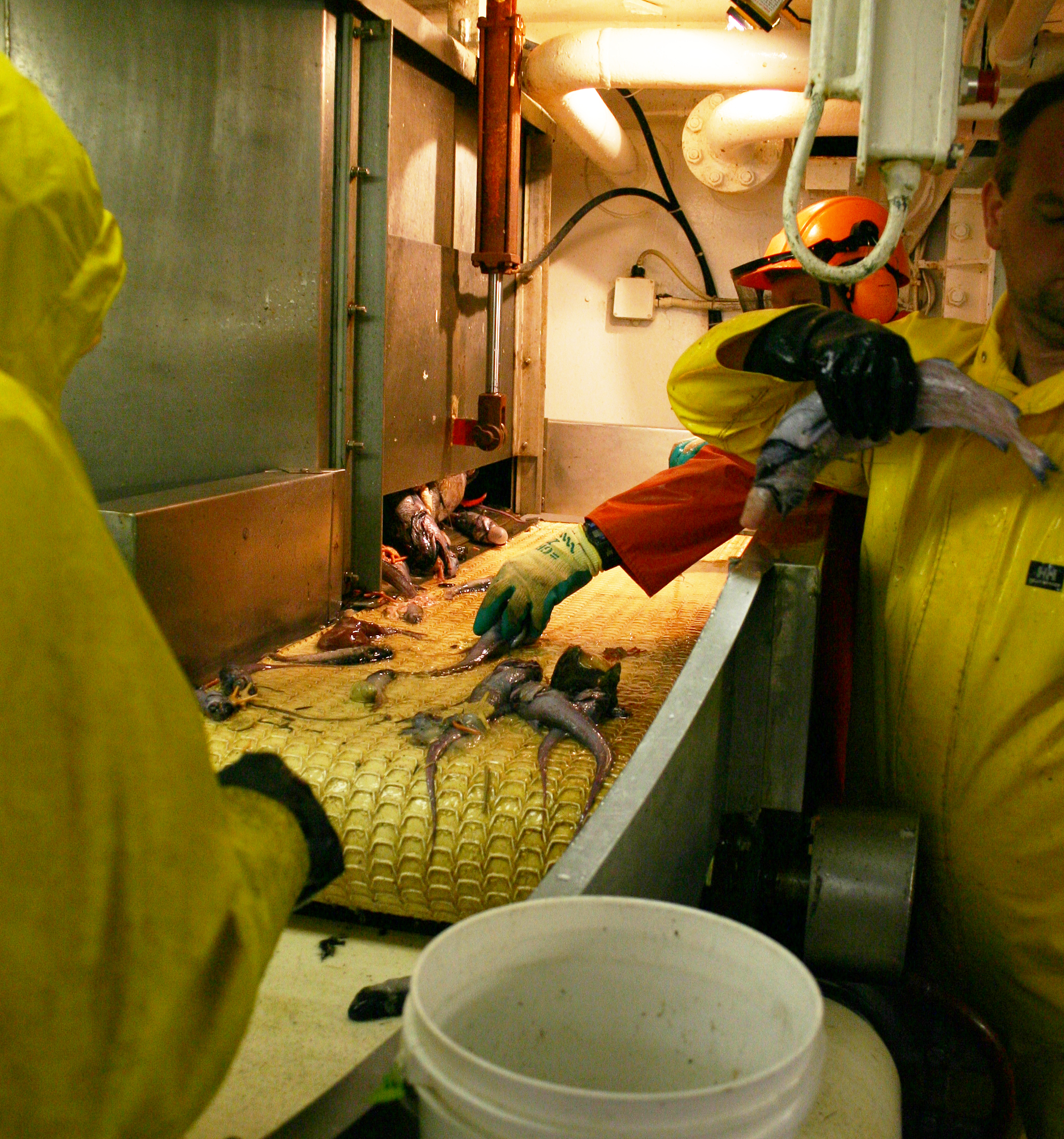 Fishes and invertebrates are released from the hopper and sorted below deck.

During this study, many species were found which were new in BC. For species we already knew about, new specimens were still valuable since they represented new locations – a new dot on the map to improve our knowledge of a species’ range. I decided to start publishing these new records, because that is what museums do best — research based on whole organisms. I’ll leave test-tube biology to others.

I started with eels because some were being misidentified as Crossthroat Sawpalates (Serrivomer jesperseni) in the rush to sort trawl samples. I realised this while skimming a copy of the Peterson Field Guide to Pacific Fishes during a physiology break. A silhouette on page 67 easily distinguished Sawpalate Eels from Duck-billed Eels. In nautical terms, I made headway.

It wasn’t until we got home (i.e., the RBCM) that I was able to dig up the literature to identify the duck-billed eels to species – there is only so much literature you can take with you on the ship. I’d really like to have all FAO fish identification keys on a water-proof tablet or laptop computer.

The head end of Venefica tentaculata (Sorcerer Eel) showing the characteristic tentacle on the tip of the snout.

In 2012, we published the first BC records of duck-billed eels (Venefica tentaculata and V. ocella) in The Canadian Field-Naturalist. In a follow-up paper we tackled the Shortdorsal Cutthroat Eel and Black Bobtail Eel, which are new to British Columbia. With careful mapping we also found that the northern-most Pale Snipe Eel from this region, actually came from 10 nautical miles within our Exclusive Economic Zone – that represents another new fish for BC waters. We also caught several Snub-nosed Spiny Eels (Notacanthus chemnitzii), and we now know these fishes have a near continuous range along our coast. We extended the range of the Long-nosed Tapirfish (Polyacanthonotus challengeri) to the northern end of Graham Island, and found significant range extensions for Transparent Eels, Sorcerer Eels, and the Crossthroat Sawpalate. This second paper on elopomorph fishes in British Columbia has been submitted to the scientific journal Northwestern Naturalist for publication. 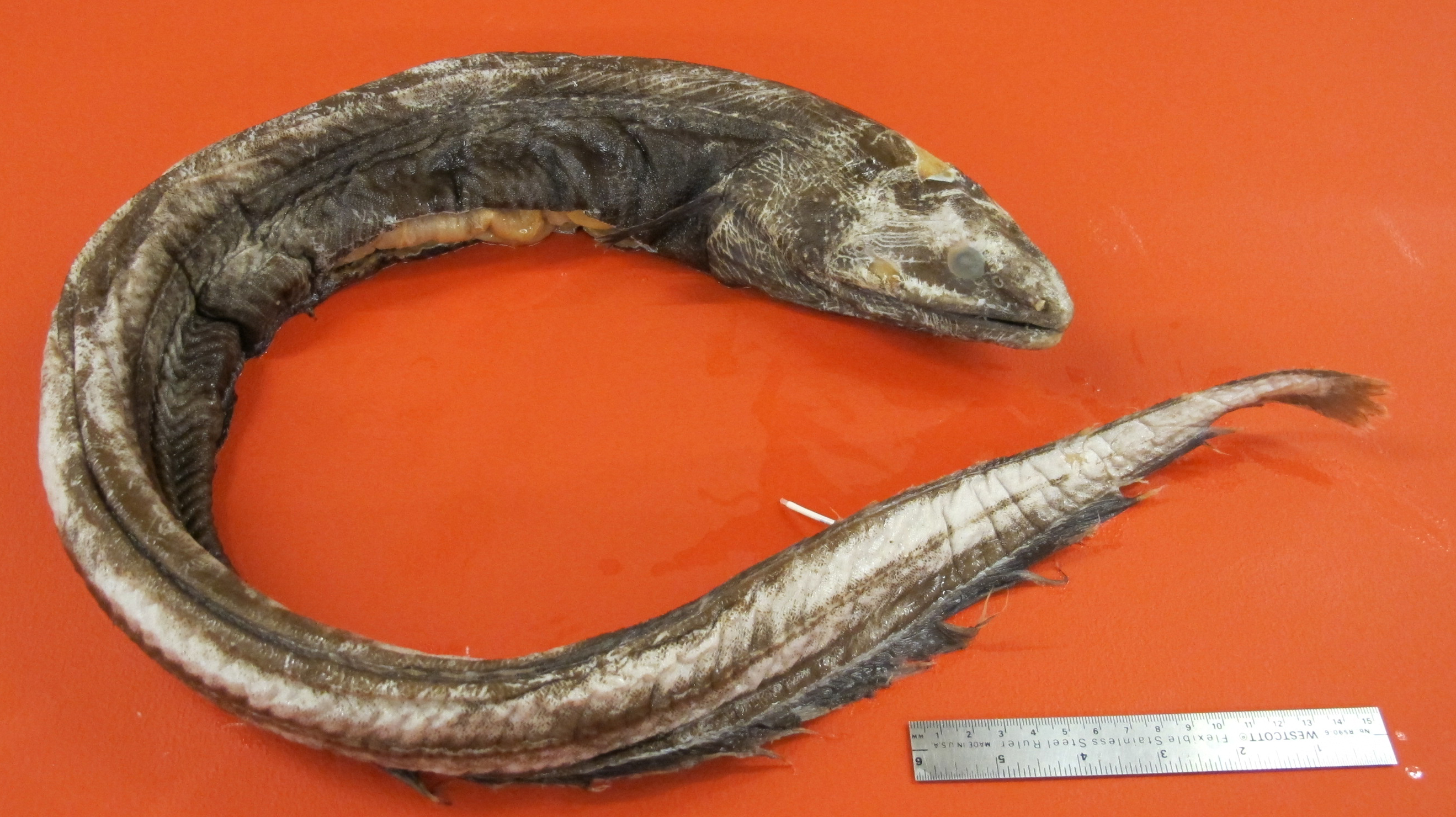 Synaphobranchus brevidorsalis (Shortdorsal Cutthroat Eel) – even durable specimens like this are damaged in trawl nets; the white tag towards the tail indicates the fish has been sampled for DNA barcoding.

Another two fish caught during the Tanner Crab trip in 2004, were identified by Kamikawa and Stevenson . They were working on a specimen of Aldrovandia oleosa from California, and borrowed two Royal BC Museum Aldrovandia specimens to confirm species identity. The two RBCM specimens represented a huge range extension for Aldrovandia oleosa.

As of 2014, the list of elopomorph fishes known to exist in British Columbia is as follows:

It is satisfying to know we can still discover new things just by dipping a net in the water. While we haven’t found new species to describe, we did discover first records for British Columbia, and in some cases, first records for the Pacific Northwest. That in itself is exciting. We estimate that the Tanner Crab survey produced at least 34 new species records or significant range records for British Columbia. These records will be published in a series of papers over the next few years. Keep your eyes open, the next paper is on Cusk-eels. The age of discovery is far from over. 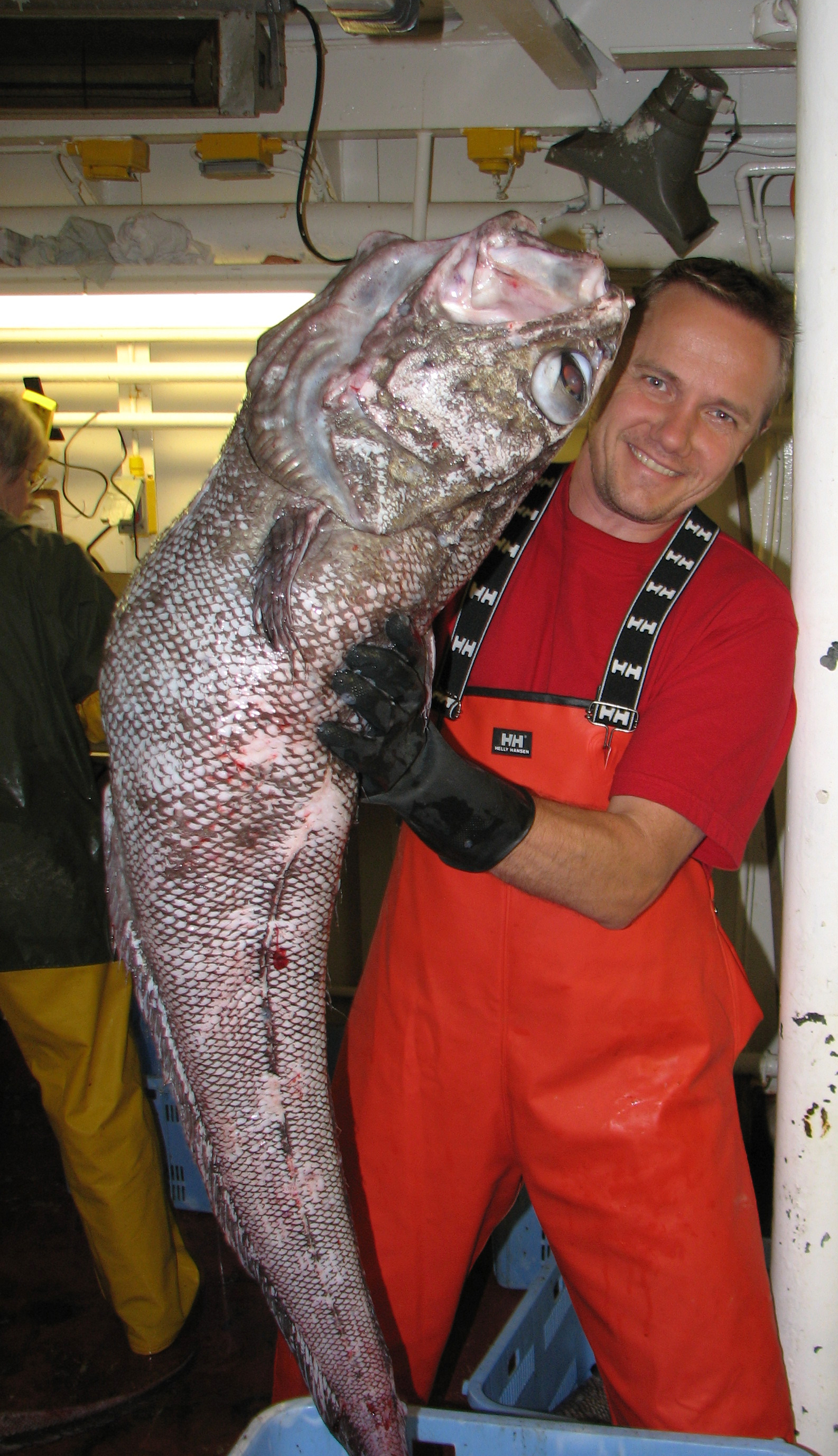 Giant Grenadiers (Albatrossia pectoralis) squish smaller fishes and delicate invertebrates in a trawl net, and are first to be sorted from the catch.